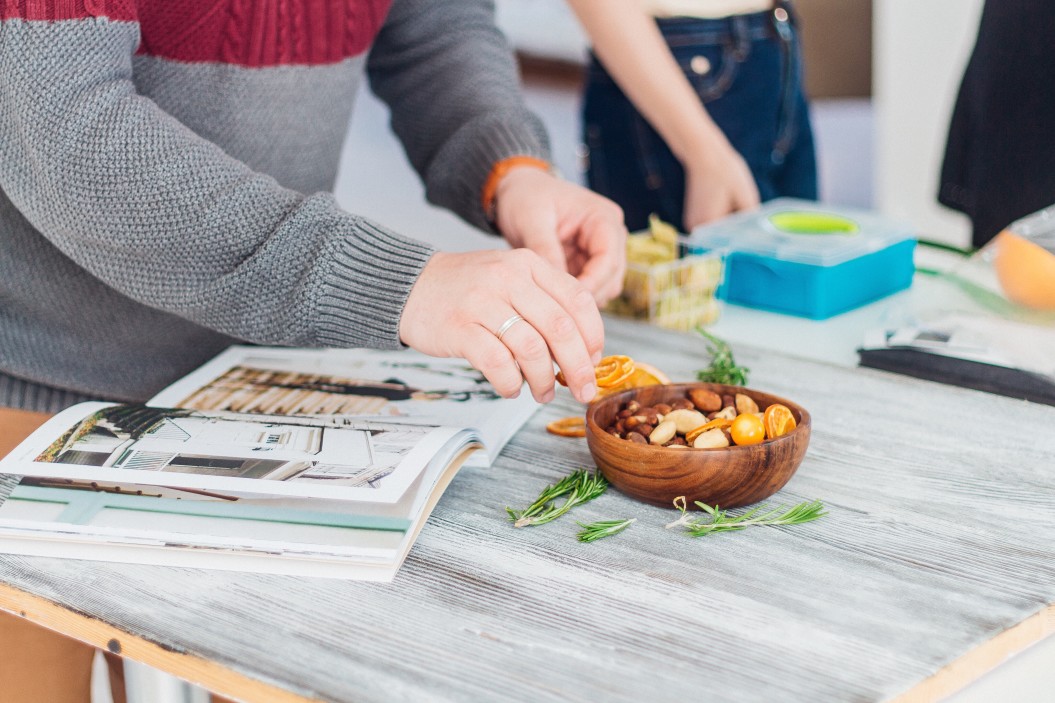 It’s the start of a long holiday winter weekend for many people. As you prep for some well-deserved leisure time, what are you tossing in your bag, pulling from the stack of books by your fireplace, or adding to your Kindle? We here at Dandelion Chandelier feel that this is a fine time to read a novel set in a restaurant. Or a chef’s memoir. Food history. Or a great cookbook. Pretty well anything that will allow us to escape into the world of food and life in the kitchen.

Why now? Because six weeks into a new year, while one side of our brains is still focused on our fitness resolutions and nudging us toward the gym, the spinning studio, the barre class, or the slopes, the other side is occupied with the pressing matter of making the best split pea soup, the ultimate chocolate chip cookie, or the perfect cassoulet. Or dreaming of the day when it’s finally time to fire up the outdoor grill. Or watching cooking shows and surfing the web looking for kitchen redecoration ideas. Or just finding a great restaurant in which to reward ourselves for having successfully survived another Valentine’s Day.

What follows, then, is our curated and completely unscientific list of great culinary reads, fiction and non-fiction. After all, you don’t gain weight just by reading about food, right?

There are hundreds of thousands of books that might have made our list – there’s a rich tradition of cuisine as a key element in literature and in great works of non-fiction: Proust’s madeleine in Remembrance of Things Past; the boeuf en daube from Virginia Woolf’s To the Lighthouse; wonderful essays by M.F.K. Fisher and R.W. Apple that were about food but also about so much more. Tom Jones didn’t make our list this time, but here’s our roadmap of recipes and stories – real and invented – about food and those who work to nourish us, body and soul.

–The Cookbook Collector by Allegra Goodman (2010) is an Austen-esque tale (set in the tech world) of two sisters in their 20s – one bookish and one analytical – and the two men who orbit around them. The elder sister runs a tech start-up; the younger is a philosophy major and environmental activist who works in an antiquarian bookstore. She’s hired away to catalogue the valuable cookbook collection of a reclusive cerebral Microsoft millionaire – you can see where this is going, but it’s a fun and literate journey.

–Kitchens of the Great Midwest, the first novel by J. Ryan Stradal (2015), is the story of child food prodigy-cum celebrity chef Eva Thorvald, told through her voice and many others’. It’s also a stroll through the region’s various cookery traditions and norms, including lutefisk and Resurrection rolls. If you’ve ever been to a Midwestern potluck and remember it fondly, this is your book.

–Bread & Butter by Michelle Wildgen (2014) is the tale of three brothers in the restaurant business in a struggling fictional Pennsylvania town. Insiders and foodies love it for its knowing tone; we were fascinated by the peek inside of the back of the house in two very different restaurants, and the challenges of creating a restaurant menu and hiring a pastry chef, but what kept us hooked was the realistic portrayal of the rivalries between the brothers, and of the difficulties of starting anew in your hometown at any and every age.

–Sweetbitter by Stephanie Danler (2016) is a bildungsroman about a young woman’s first year in Manhattan circa 2010. She works as a back-waiter in a lightly-fictionalized version of the Union Square Café, and thanks to some tangled relationships, the bitter frequently overwhelms the sweet. The first half is better than the second, but it’s worth a read.

–Red Sparrow by Jason Matthews (2013) is the first in a trilogy of ripped-from-the-headlines, sharp and smart spy thrillers set in present-day Russia that also include a meta-commentary on the narrative in the form of recipes. A former CIA officer, the author is deeply expert on espionage; the two spies (American male, Russian female) locked in combat move through Moscow, Helsinki, Rome, and Athens. Each chapter concludes with a recipe for a dish that a character has just eaten. Foodies and thriller aficionados both love this series.

–The City Baker’s Guide to Country Living by Louise Miller (2016) is a charming rendition of a year in the life of a 32-year-old pastry chef who loses her job at a swanky Boston club and retreats to Vermont to work in a bed-and-breakfast. That set-up sounds like a twee ‘70s sitcom or a late-‘90s rom-com, but Miller delivers something more contemporary and artful than expected.

–In the Kitchen by Monica Ali (2009) is set in two milieus emblematic of Great Britain: the kitchen of a hotel restaurant in London, where the protagonist is an executive chef surrounded by a multicultural, multilingual staff; and an old mill town in the north of England, where his dying father has worked all his life and where the Anglo past is actively mourned. A prescient look at pre-Brexit Britain, this is timely and good food for thought.

–The Last Chinese Chef by Nicole Mones (2007), author of Lost in Translation, features a newly- widowed columnist for a food magazine who is forced to go to Beijing to deal with a patrimony claim filed against her dead husband. While there, she’s assigned to cover a male chef’s quest to win a contest to join the national cooking team for the 2008 Games (he’s the grandson of a legendary Chinese chef). It’s a well-informed exploration of the tangle of Chinese food and culture, plus a reasonably cute romance. You might find it corny, but we loved it.

–Baking Cakes in Kigali by Gaile Parkin (2009) is set six years after the genocide in Rwanda. Cake boss Angel has recently moved to the country from Tanzania with her husband, and each of the fourteen chapters contains the tale of one confection she bakes, and how the shadow of loss still hangs over even the happiest of occasions for which a special cake is needed. The novel is fierce in its portrayal of female survivors, and tender in its hope that reconciliation is actually possible. The power of cake should never be underestimated.

Memorable memoirs and conversations with chefs:

–Spoon Fed: How Eight Cooks Saved My Life by Kim Severson (2010) is an account by a New York Times food critic of her interactions with iconic female chefs Marion Cunningham, Alice Waters, Ruth Reichl, Marcella Hazan, Rachael Ray, Edna Lewis, Leah Chase and her own mother, Anne Marie Zappa Severson. It’s both a memoir and a commentary on women and their roles in the kitchen and in the world.

–A Homemade Life: Stories and Recipes from My Kitchen Table by Molly Wizenberg (2009) is the story of a life with food and the kitchen at its core. The author leaves Seattle for Paris after the death of her father, and discovers her heartfelt desire to make food her lifelong profession. Her blog Orangette begins as a hobby, but soon develops a following, and no wonder – her recipes and stories are delicious.

–Something to Food About: Exploring Creativity with Innovative Chefs by Questlove (2016) is the result of the artist’s ongoing effort to build a bridge between music and food, and to fully mine the depths of the creative process. The author has been a Top Chef judge and a James Beard award presenter – he’s also the head of the house band for “The Tonight Show.” This chronicle of in-depth interviews with 10 chefs is as cool and unusual as he is in its exploration of perfectionism and obsession as common elements in all creative acts. We’re hungry for more books like this.

–Home Cooking: A Writer in the Kitchen by Laurie Colwin (1988) – this lovely book by a novelist who sadly passed away too soon is both memoir and cookbook; it was one of the first such books we ever read, and it actually got us hooked on this genre. Along with its sequel, this slim volume will cause you to nod in wry recognition and to reflect on the best and most emotional times at your own kitchen table. And then you’ll want to immediately begin making her chicken soup.

–Heartburn by Nora Ephron (1983) – it’s not possible to talk about great books about food without including something from the inimitable Ms. Ephron. This classic roman a clef still rings achingly true: a novel about a pregnant and jilted married cookbook author that also includes recipes, it’s hysterically funny and reminds us of how much we still miss her. Best line in this book? “If I had to do it over again, I would have made a different kind of pie.”

–Butter: A Rich History by Elaine Khosrova (2016) – we learn about butter from every conceivable angle in highly digestible prose. Plus there are recipes for many classic dishes and sauces. We had to stop reading several times for buttered toast, popcorn with butter, and bread-and-butter breaks, so stock up and plan accordingly.

–Salted: A Manifesto on the World’s Most Essential Mineral, with Recipes by Mark Bitterman (2010) – we now understand that it can be a luxury item; this was the book that initiated our education about the big wide world of salt.

–Eight Flavors: The Untold Story of American Cuisine by Sarah Lohman (2016) – the author’s thesis is that American food is united by eight flavors: black pepper, vanilla, curry powder, chili powder, soy sauce, garlic, MSG, and sriracha. Read about what brings us all to the table.

–The Encyclopedia of Spices & Herbs: An Essential Guide to the Flavors of the World by Padma Lakshmi (2016) –the Top Chef host has assembled a truly comprehensive reference volume and user’s guide to spices, herbs and blends. It will make you want to travel, to rummage through your pantry to sniff and taste-test, and also to roll up your sleeves and cook up something spicy.

–The Red Rooster Cookbook: The Story of Food and Hustle in Harlem by Marcus Samuelsson (2016) – the author of the New York Times bestselling Yes, Chef, and a frequent judge on Chopped delivers a wonderful mash-up of recipes from his lively and stylish uptown restaurant, an homage to Harlem’s past, and an affectionate portrait of the neighborhood that he calls home. The biscuits alone are worth the price of the book (believe us).

–Food52 Genius Recipes: 100 Recipes That Will Change the Way You Cook by Kristen Miglore (2015) is a terrific collection of iconic recipes from master chefs like Julia Child, Alice Waters, and David Chang. Curated by the team at this leading food blog site, it’s an educational read with gorgeous photographs. Oh, and if you choose to actually make any of them, these are great classic dishes to have in your repertoire.

–Baked: New Frontiers in Baking by Matt Lewis and Renato Poliafito (2008), as well as their three follow-ups, Explorations (2010), Elements (2012) and Occasions (2014), are among our very favorite dessert cookbooks. The partners, who opened their classic American bakery in Red Hook, Brooklyn several years ago, give us fun and manageable recipes for all manner of sweets. It’s baking at its most chic.

–The Silver Palate Cookbook by Julee Rosso and Sheila Lukins (1982) remains one of our all-time favorite go-to cookbooks. It has become both a treasury of great recipes and a font of memories – “remember when we cooked that for Thanksgiving? Remember the time we made that pie?” If you haven’t read it lately, this is a great time to renew your friendship with this pair.

Bon appétit, Dandelions! Whether you’re reading, cooking or making reservations this weekend, we hope you have a delicious time.