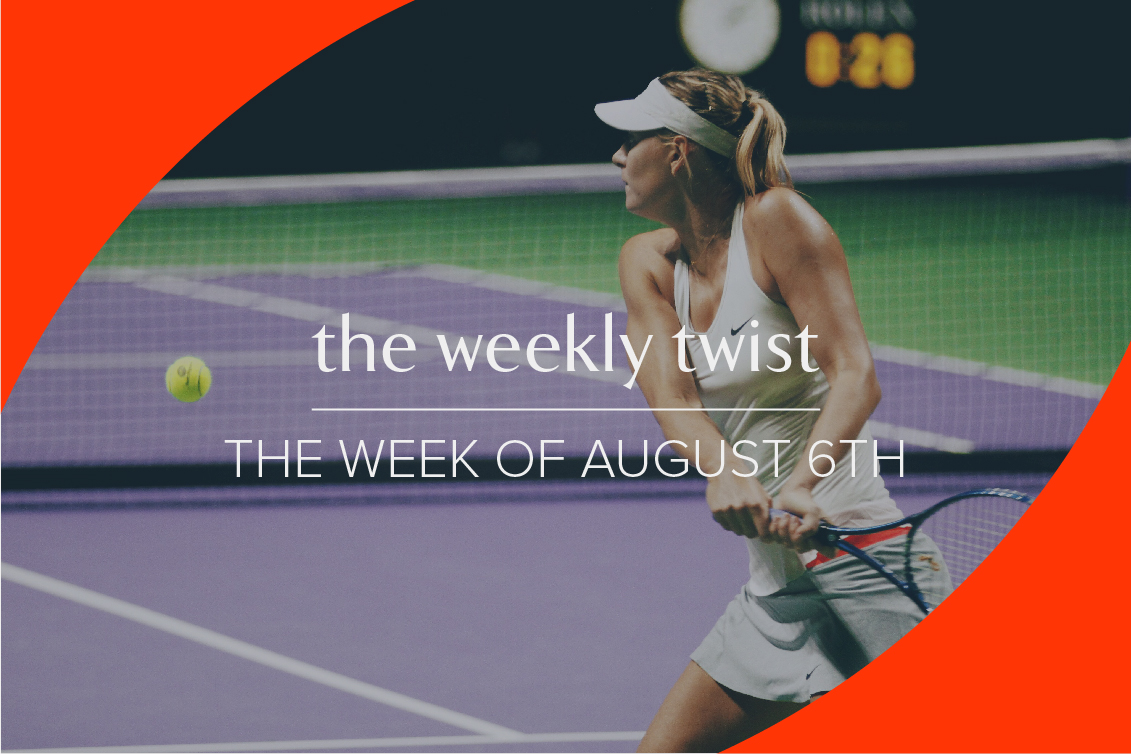 You don’t love professional sports, but your livelihood and/or personal happiness depends upon your being able to converse intelligently about it. Now what? Fear not. The TWIST is our weekly Dandelion Chandelier guide to what’s happened on the field, on the court and on the ice — read this and you’ll know how to talk about sports this week like a champion.

Every Sunday we’re listing the three (and only three) things that you need to know this coming week to speak cogently about professional sports with your boss, your colleagues at work, the car pool gang, that guy at the gym, the chatty cashier at the gas station snack shop or your cousins.

This week’s edition of TWIST: This Week in Sports Talk is dedicated to New England Patriots’ quarterback Tom Brady, who turned 40 a few days ago. Happy birthday, dude! No jokes about deflated balls, please (we’re looking at you, Atlanta Falcons fans). Brady will be the 20th NFL quarterback to play after turning 40, and very few have performed well after hitting that milestone (Brett Favre and Doug Flutie bounced from team to team and retired at 41 and 43, respectively). If Brady keeps hanging out with his teammate and friend, the exuberant Pats’ tight end Rob Gronkowski (aka “Gronk,” who’s only 28), and if he continues the strong rapport he’s building in training camp with his new wide receiver, Brandin Cooks (who joined the Pats this spring in a trade with the Saints — at 23, he’s one of the youngest players in the NFL), he’ll be fine. Head coach Bill Belichick has cleverly surrounded his star with excellent young talent. After all, the oldest quarterback in NFL history, George Blanda, retired at age 48.

In the meantime, there’s an added benefit for you in all of this: to segue gracefully this week from any sports-related conversation that you aren’t really comprehending to one where you can contribute, simply do the following: say “Hey, Tom Brady is 40, can you believe it?” Then say “What an incredible couple he and Giselle are.” Then seamlessly turn the topic to supermodels, which can lead to a discussion of fashion, shoes, Brazil or plastic surgery – take your pick. Now you’re no longer in a sports conversation! See how easy this is?

However, for Those Who Do Not Follow Professional Sports and are unable to successfully change the subject, here’s what you need to know this week (and not a single thing more):

1. World’s fastest human is about to take it slow. Must know: This week, Jamaican sprinter Usain Bolt returned to Queen Elizabeth Olympic Park in London to compete in his final global championship at the World Athletics Championships before retiring from the sport. Nice to know: The nine-time Olympic gold medalist ran the 100 meter for the final time last night, and despite the pre-race hype and the high hopes of the crowd, Bolt came in third. It was his first loss in the 100m since 2011; had he won, it would have been his fifth world championship gold in the event. He accepted the heart-breaking defeat gracefully, with warm thanks to the crowd. They’ll see him one more time: he’ll run the 4×100 meter relay this Saturday. Extra Credit: Bolt has won 11 world championship medals, and is still “the fastest man on earth” after having run the 100 meter in 9.58 seconds in 2009.

2. Colin Kaepernick NFL controversy continues. Must know: The most striking hot-button issue in the NFL at the moment concerns quarterback Colin Kaepernick. The player, who once quarterbacked the San Francisco 49ers to a Super Bowl, set off a storm of media attention last fall by “taking a knee” rather than standing as the national anthem was sung at the beginning of each 49ers game. His gesture was meant to draw attention to police violence against black men, and was adopted by a few other players throughout the league. Kaepernick became a free agent at the end of last season and has remained so, deep into the off-season. Nice to know: The Baltimore Ravens are considering picking Kaepernick up, and there is active discussion about whether their final decision will be based on his football skills or on the lingering controversy surrounding the player and his social activism. Extra credit: A poll of more than 9,200 television viewers recently conducted by J.D. Powers said that the NFL’s declining television ratings last season were due in part to this controversy: 26% percent of viewers cited the national anthem protests as the reason they watched less football; 24% said that it was because of the league’s off-field image issues, such as domestic abuse; 20% cited “excessive commercials,” and 16% said they tuned out because of the presidential election.

3. College football season starts on August 26th. Must know: The 2017 preseason Coaches’ Poll was released Thursday afternoon: not surprisingly, Alabama begins the season at #1 and Ohio State at #2; defending champion Clemson is #5, and Florida State and USC round out the top five. Nice to know: The Alabama and Ohio State coaches, Nick Sabin and Urban Meyer, are both considered diabolical geniuses (sort of like the Patriots’ head coach Bill Belichick, aka “Hoodie.”) Extra credit: USC quarterback Sam Darnold became a star in this year’s Rose Bowl when he led the Trojans to a 52-49 win over Penn State. Darnold won’t be eligible for the NFL draft until 2018 at the earliest, but he’s by far the most talked-about player amongst NFL scouts. Gold Star Extra Credit: The New York Jets are hoping to make Darnold their #1 draft pick next year. To do that, they have to have to finish this season in last place – rumors are that’s why they let all their good players go during the off season. Such dark scheming . . . And you thought Game of Thrones was complicated.

As reported in last week’s TWIST, superstar tennis player Novak Djokovic has tapped out for the remainder of the year due to injuries. That decision follows Roger Federer’s successful 6-month break, which contributed to his resurgence and victory at Wimbledon this year. We predicted that taking time out for rest and recovery would become a trend, and it looks like we were right: two days ago, defending US Open champ Stan Wawrinka, 32, also declared himself out for the season due to a knee injury. The US Open is Federer’s to lose.

In other supermodel-sports news, 3-time Sports Illustrated swimsuit issue cover model Kate Upton is engaged to Detroit Tigers pitcher Justin Verlander; she discussed their impending nuptials last week with Access Hollywood, and admitted that she “keeps delaying” their wedding date. Will they become the next Marilyn Monroe and Joe DiMaggio? (If you’re too young to know who they are, ask your parents.) Only time will tell.

Finally, in other birthday news, pro golfer Jordan Spieth celebrated his 24th birthday this week by blowing out a candle on a birthday cake positioned on top of the Golf Champion Trophy (aka “The Claret Jug”) that he won last month at The Open in Britain. If all else fails conversationally, ask your sports-loving friends to tell you about the crazy things winners have done with this coveted cup or hockey’s Stanley Cup. We guarantee that the subject will move on from sports.

32 days until the start of the NFL regular season. That’s it! You’re good to go. See you next week.