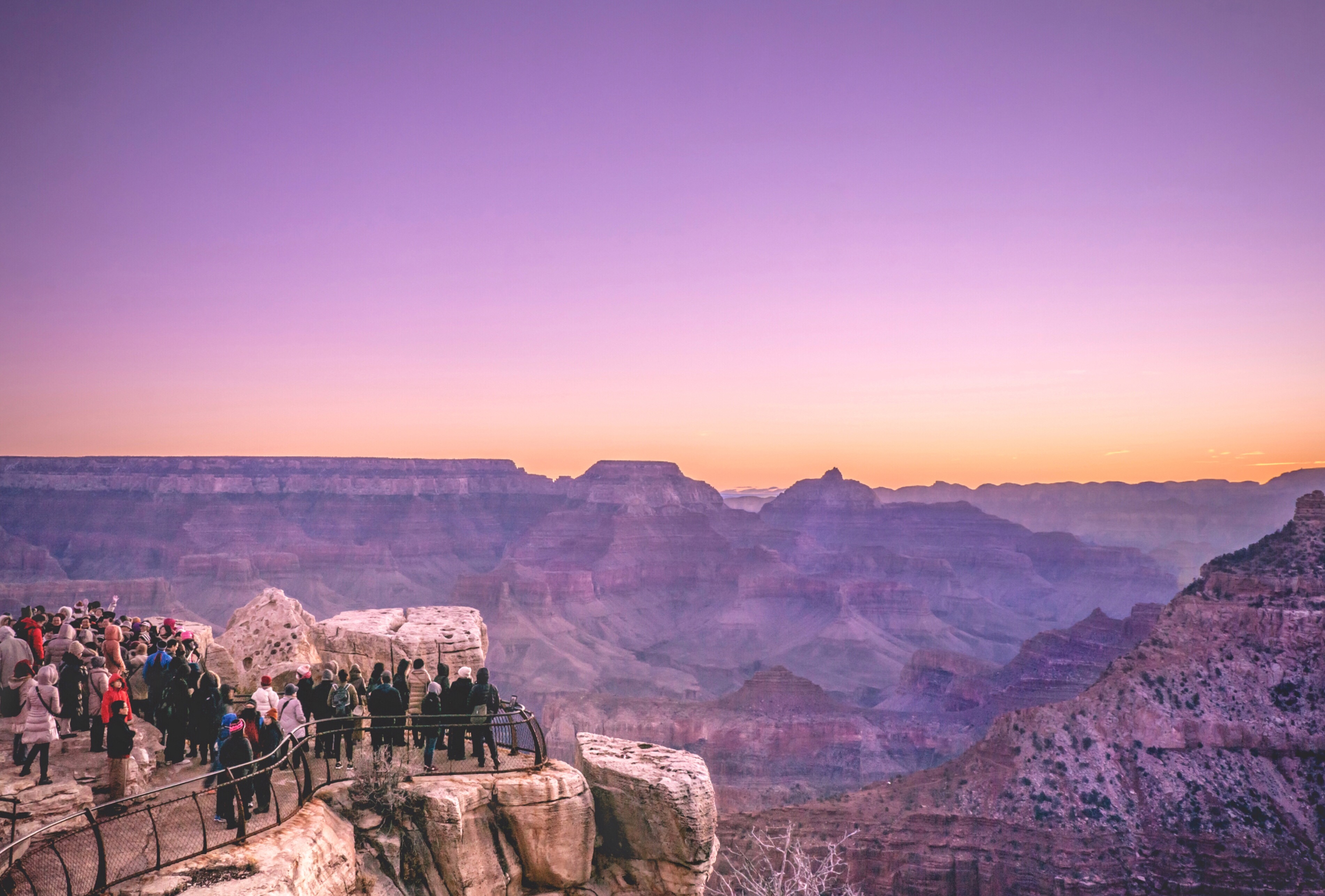 Luxury lovers of the world, have you ever visited a national park in the United States? If you’re like us, the answer is likely to be no. Members of the global elite don’t tend to spend their vacations in public parks, perhaps because they still harbor childhood images of grizzly bears eating leftovers from campground trash containers, park rangers in funny hats, collapsing tents, outhouses and the antic cartoon goings-on at Jellystone Park, home of Yogi Bear and friends. We confess to being guilty of dismissing the national parks as “not for us.” Grand jeté, yes – Grand Teton, no.

In the interest of research, however, a team from Dandelion Chandelier made an expedition to a national park for the first time ever while on a 4th of July holiday trip to Jackson Hole, Wyoming. We visited Yellowstone and Grand Teton, both of which are day trips from Amangani, the luxury hotel where we stayed.

Turns out, this is an outstanding way to mark Independence Day. Or any day, really.

A very brief overview: national parks are areas of land protected by the government, chosen for their natural beauty. In the United States, there are 59 of them – our friends at Statista report that 331 million people visited at least one of them last year. The Great Smoky Mountains National Park is the most-visited – rounding out the top 5 are the Grand Canyon, Yosemite, Rocky Mountain National Park, and Zion National Park.

Yellowstone – which spans the states of Wyoming, Montana and Idaho – is currently the 6th most-visited national park, with over 4 million visitors last year. It was established in 1872 – it was the first National Park in the U.S. and is said to be the first national park in the world.  This designation came about after a series of explorers, trappers and artists roaming the Rockies began to tell of its beauty and its unusual geothermal features. Lewis and Clark were mapping the region, and John Colter – one of their guides – broke off to explore the area that is now Yellowstone. Several explorers began to advocate for the preservation of the land for use of the public, including Ferdinand Hayden. Lovers of art should take note that painter Thomas Moran was instrumental in this effort – words could not describe what the region looked like, and many thought that the explorers were delusional – his water colors brought the majestic vistas to life for the decision-makers back East.

Grand Teton National Park, number 9 on the list of most-visited last year, has an equally interesting origin story. It was designated a national park in 1929, but that only protected the major peaks of the Teton Range. The valley of Jackson Hole remained in private ownership until the 1930s, when conservationists led by John D. Rockefeller, Jr. began purchasing land there to be added to the existing national park. Against public opinion, and with repeated Congressional efforts to repeal the measures, much of the land was set aside for protection in 1943. Ansel Adams took his iconic photo of Grand Teton and the Snake River in 1942, which surely helped hurry along the effort to protect the landscape.

As we heard these bits of history for the first time, while speeding in the blush-pink dawn through the Jackson Valley, we felt dopey for not knowing these things before. How inspiring is the moxie of the people who helped preserve the land in perpetuity for use by the public?

There are many ways to experience these two national parks, depending on whether you want to go high-luxury or back-to-nature. You can stay at one of the federally-owned hotels in the parks (consider the Yellowstone Lake Hotel); you can pitch a tent and cook outdoors (just be sure to get a permit first); you can stay at one of the privately-owned hotels in the park (we love the Jenny Lake Lodge — it’s inside Grand Teton, is absolutely charming and has Wi-Fi).

Or you can do what we did: stay at a luxury hotel or resort in Jackson Hole, and book a private guide to show and teach you everything you want to know (and nothing that you don’t). If you’re pressed for time and not looking to go full-on rustic, this is the ideal option.

Our first excursion was to Grand Teton – if you’re staying in Jackson Hole, you can easily do this visit in 4-6 hours. In early July, there was still snow at the tops of the mountains, and a riot of purple and yellow wildflowers in bloom in the valleys. We set out very early in the morning and took a “float trip” down the Snake River. Afterward, we went to the shores of Jackson Lake to see the snow-capped mountains mirrored in the water’s glassy surface (the park’s lakes are fed by pure mountain streams.) The photos we took are so crisp that they seem unreal. No filter, we swear – it’s naturally drop-dead gorgeous.

We had lunch at the charming Jenny Lake Lodge, nestled in a valley inside the park (the service is impeccable, the Idaho trout is their specialty, but the bison burger is yummy, too – be sure to order the homemade chocolate chip cookies and a glass of milk and your bliss will be complete). Then we hit the other side of Jackson Lake, where we lingered in the shade, breathing in the deep green fragrance of sagebrush, pine, spruce and fir. The earthy scent and the stunning view transported us for a few precious moments to a state of deep serenity. Perched on a rock in the shade, watching the chipmunks and the ravens and eavesdropping on our fellow visitors – sometimes life feels very nearly perfect.

Yellowstone requires more of an investment of time if Jackson Hole is your home base. It’s a 2-hour drive there and back (thanks in part to the bison-jams that occur when a herd crosses the highway and everyone stops to take pictures). So you’re looking at a minimum of 8 hours if you really want to get a sense of the place. It’s a garden of earthly delights, and definitely worth the investment of time. Rolling out early is the best strategy if you’re up for it. We set out from Jackson Hole at 5:30a and were rewarded with a spectacular sunrise and no traffic or crowds (early morning is also the best time to see the wildlife, before the heat of the day drives them deep into the forest).

You could spend days in the park (it’s larger than Delaware and Rhode Island). A good itinerary if you want to visit its most iconic areas in one day, is to take the scenic route and see the Upper and Lower Falls of the Yellowstone River and the Grand Canyon of Yellowstone, all of which are spectacularly beautiful. As you go, you’ll pass the remains of various forest fires, including the large fires of 1988, when nearly one-third of the park was burned. The modern approach is to let these fires burn themselves out, so that the forest can naturally replenish itself.

If your interests are more scientific than aesthetic, you can focus your exploration on the geothermal elements of the park. Begin with a visit to the mud pots – their sulphurous odor and evocative names (like “The Dragon’s Caldron”) are definitely worth experiencing (it’s hard to believe you’re still on earth when you get deep into this terrain.) There’s a wide variety of thermals to explore at the park: hot springs, geysers, and of course Old Faithful. Few people know before they visit that the park is centered over the Yellowstone Caldera, the largest super-volcano in North America. The caldera is considered an active volcano, and that explains all the geothermal activity throughout the park – the volcano is releasing pressure in various ways. Yellowstone is home to the largest active geyser in the world—Steamboat Geyser in the Norris Geyser Basin. The park contains over 10,000 geothermal features in all.

Whether you opt for science, scenery or both, bring your own lunch and you can have a picnic on the shores of a river or lake, or in a nearby meadow.

On our trip, we saw a wonderful array of animals: an industrious otter; elegant blue herons; feisty Canada geese; more bison than we could count; a regal male elk and his bachelor elk friends, who seemed to have created an elk man-cave on a little island; female elks grazing in peaceful groups; a trumpeter swan; ducks; a marmot; and a mule-eared deer. No black bears, grizzly bears, bald eagles, or wolves, though. Maybe next time.

The camaraderie of the people visiting the parks is lovely and infectious: people take photos for each other, offer tips on what to see, and exchange jokes (one eminence grise heard me say “wow” at the sight of the Upper Falls, and said “that’s all I’ve been saying all week! Wow, wow, wow!”) You’ll begin to feel a part of a community in a way that you might not have expected.

If you go, you’ll come away dazzled and remembering a jumble of lovely images: sky, mountain, river, lake, waterfall, geyser, wildflowers. Take the mental images home with you and remember them in the fray of the everyday. Our majestic national parks are waiting for you, whenever you’re ready to receive their grace.