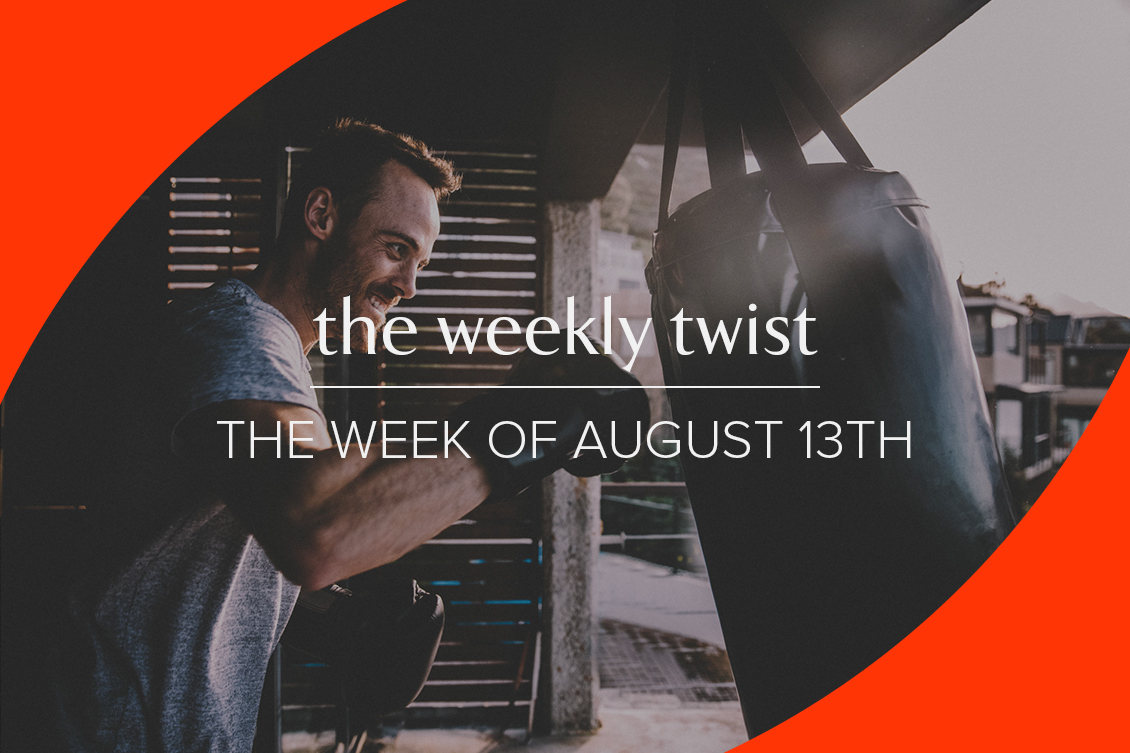 You don’t love professional sports, but your livelihood and/or personal happiness depends upon your being able to converse intelligently about it. It’s a common dilemma with a simple solution: you need to learn a new language. You need to learn how to talk sports. And we’re here to help! The TWIST is our weekly Dandelion Chandelier guide to what’s happened on the field, on the court and on the ice — read it every week and we promise you’ll know how to talk about sports like a champion.

Every Sunday you’ll find the three (and only three) things that you need to know this coming week to speak cogently about professional sports with the big boss, the gang at the office, the drug store cashier, your seatmate in business class, or your grandparents.

This week’s edition of TWIST: This Week in Sports Talk begins with a nod to the New England Patriots, proud owners of a new team jet. While other teams are flying commercial in coach, the Pats have their own plane. That’s just how they roll.

Speaking of large purchases, it appears that there’s finally a deal for the sale of MLB’s Miami Marlins. The team has been on the market for months in an unusually lengthy and public process, and now it appears that a consortium including former Yankee and baseball icon Derek Jeter and financier Bruce Sherman have reached an agreement to buy the team for $1.17 billion from Jeffrey Loria. The Tagg Romney-Jeb Bush team and Miami businessman Jorge Mas were the other two final bidders. Jeter will serve as head of baseball operations for the team, and former NBA star Michael Jordan is also part of the ownership group. The deal has to be approved by the MLB owners, with a vote likely in October.

For Those Who Do Not Follow Professional Sports, here’s what you need to know this week (and not a single thing more):

1. Judgement day in the NFL. Must know: In a previous TWIST, we filled you in on the past misbehavior of some of the Dallas Cowboys. This week, the NFL ruled that running back Zeke Elliott will be suspended for 6 games, meaning that he’ll miss almost half the season. The ruling states that if he commits another offense, Elliott is likely to be banished from the league. This is a sterner warning than what we’ve seen in the past, indicating that the NFL is raising the stakes on the consequences of player infractions. Nice to know: This suspension will probably have a significant negative impact on the Cowboys’ chance of winning a division title (they’re in the NFC East). They’re quickly becoming the bad boys of the NFL. Extra Credit: Elliott can appeal this ruling through the player’s union, and he’ll probably try to get it reduced to 3-4 games. In the meantime, you can add some Cowboys fans – along with some die-hard New England Patriots and New Orleans Saints fans – to the list of people throwing shade at NFL Commissioner Roger Goodell.

2. Jay Cutler Face is back. Must know: Former Chicago Bears’ quarterback Jay Cutler became known for his facial expressions of complete and total disinterest at press events, no matter how marvelous the news that was being communicated about him. “Smokin’ Jay Cutler” was an internet meme posted on Tumblr in 2012 that became legendary. It depicted Cutler with a cigarette dangling from his lips, perfectly conveying his ennui. Nice to know: Cutler retired from the NFL and took a job as a sportscaster at Fox. Last week, the 34-year old was unexpectedly pulled back into the NFL when the Miami Dolphins lost their starting quarterback, Ryan Tannehill, to an injury that will keep him out for the entire season. Head coach Adam Gase (who had previously worked with Cutler as the Bears’ offensive coordinator) asked him to step in. Cutler agreed to a one-year contract for a guaranteed $10 million, and there was speculation about whether “Jay Cutler Face” would return. At his first press conference in Miami last week, the world got its answer. Cutler did not disappoint: he provided the internet with fresh images of apathy and boredom. Despite the excitement of being pulled out of retirement, he looked completely disengaged – “Smokin’ Jay Cutler” is back! Extra credit: For those on Colin Kaepernick watch, the latest rumor is that the Baltimore Ravens really need him now – their starting quarterback Joe Flacco is injured, and their backup QB, Ryan Mallet, played poorly in a pre-season game against the Washington Redskins this week. Watch this space for further updates.

3. Put your money where your mouth is. Must know: There is no better way to gain credibility than having an opinion about an upcoming sporting event and being willing to back it up with a friendly bet (I learned this when I was invited into my current football pool – we wager on 10 games per week, $1 a game, and trash talking is not just allowed, it’s encouraged.) You will gain huge style points by approaching Those Who Follow Sports and offering to bet on a game or sporting match of some type. Ideally, you would demonstrate your badass swagger by betting on the least likely outcome (because it would pay out the most if you were right.) Nice to know: Here’s how a friendly wager on the upcoming August 26th “super-fight” in Vegas between champion boxer Floyd Mayweather and mixed-martial artist champion Conor McGregor would work. Step One: Go online and get the current “Vegas line.” Each fighter will have a number next to his name with either a plus or a minus sign. A minus sign always means a favorite, and a plus sign always indicates an underdog. As of August 4, the line was Mayweather -550, McGregor +375. That means Vegas expects Mayweather to win. With favorites you have to bet more to win less, while underdogs pay more than you wagered. In this case, you’d have to bet $550 for every $100 you hope to win if you back the favorite. McGregor at +375 means you’d win $375 for every $100 you wager if he wins. Step Two: approach your counter-party with an offer – like “I’ll take McGregor for $10.” Worse case is you lose $10. Best case is he wins, in which case you just made $37.50. Plus you’ve rocketed to peer status with Those Who Follow Sports. Extra credit: If you want to go crazy, you can bet on whether someone will win the match with a TKO (technical knock-out). That means the fighters are still standing but the referee ends the match because one of them is clearly dominant. Right now, the line in that bet is Mayweather -130, McGregor +400. Feeling lucky?

Finally, things got dirty at the PGA Championship a couple of days ago. Jordan Spieth, in pursuit of the title that would make him the youngest player ever to win a career Grand Slam, hit a wild swing and found his golf ball sitting in the middle of cart path. The rules allowed him to move the ball in a “free drop:” he could move anything “not secure or growing” and then place the ball where he’d have the best shot. Spieth proceeded to tear up a reasonably large section of the course to get the lie he wanted. We applaud his willingness to get his hands dirty in pursuit of his goals. It’s a lesson for all the kids at home. As of yesterday, Spieth was 11 strokes behind the leaders, so he’s unlikely to win this one. Meanwhile, fellow player Jon Rahm, 22, known for losing his temper and unleashing a string of expletives, has maintained his composure so far this week. Who says undisciplined is the new stoic?

25 days until the start of the NFL regular season, people. That’s it! You’re good to go. See you next week.