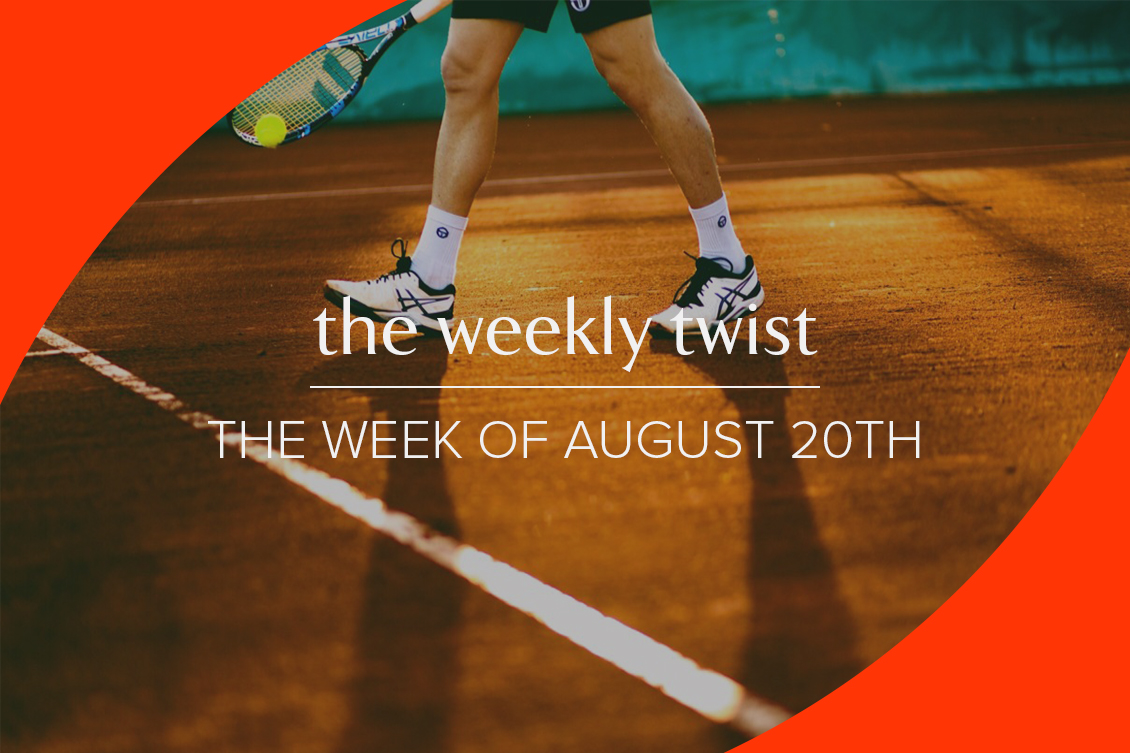 You don’t love professional sports, but your livelihood and/or personal happiness depends upon your being able to converse intelligently about it. It’s a common dilemma with a simple solution: you need to learn a new language. You need to learn how to talk sports. And we’re here to help! The TWIST is our weekly Dandelion Chandelier guide to what’s happened on the field, on the court and on the ice — read it every week and we promise you’ll know how to talk about sports like a champion.

Every Sunday you’ll find the three (and only three) things that you need to know for the coming week to speak cogently about professional sports with your boss, your colleagues at the office, your spin class pals, the guy next to you on the plane, your secret crush, and your siblings.

By the way, don’t let tomorrow’s total solar eclipse blind you to the need to be able to talk sports this week. That’s a 2-minute event – pro sports are forever.

This week’s edition of TWIST: This Week in Sports Talk is coming to you from a beach in New England, and we’ll begin with a tip of the cap to Boston’s long-running success in professional sports of all kinds. Beantown has won 37 national championships in professional baseball, basketball, football, soccer and hockey. That makes them second only to New York. And people wonder why Red Sox Fans despise the Yankees. And why Giants fans love to hate on the Patriots.

Those ancient rivalries are for another day. For Those Who Do Not Follow Professional Sports, here’s what you need to know this week (and not a single thing more):

1. MLB’s LA Dodgers are on track to make history. Must know: The LA Dodgers sit atop the National League West with 85 wins and 34 losses as of this writing. They lead their division by 18 ½ games — that’s the largest lead in franchise history. The team’s juggernaut puts them on track for a historic season. They’ve already had two winning streaks of at least 10 games, they won 37 consecutive home games from May 3 to August 11, and they’re currently on pace for 115 wins, just one win away from the MLB record for a 162-game schedule. Nice to know: In the history of the league, only two teams have ever won 116 games: the 1906 Cubs (who played a shorter season) and the 2001 Seattle Mariners, who went 116-46. Extra Credit: You’ll be perceived as having a very high sports IQ this week if you say something along the lines of “These guys are on fire. If the Dodgers keep this up, they’ll be the Golden State Warriors of major league baseball!”

2. New England Patriots’ quarterback defies “The Madden Curse.” Must know: After their astounding come-from-behind victory in this year’s Super Bowl, the consensus view is that the Pats are a lock to represent the AFC at Super Bowl LII in early 2018. Our Sports Desk advises that anytime every sports writer and Vegas bookie thinks the same thing, you should question it. The Pats could be set up for an epic fail this season. Nice to know: Adding to the suspicion that things are just going too well for the team right now, quarterback Tom Brady is on the cover of the 2018 edition of the football simulation game Madden NFL, which will be released on August 25th. This has historically been a “curse,” ensuring that whoever is on the cover endures bad luck – either an injury or a lousy statistical season. Need proof? Brady’s teammate tight end Rob Gronkowski was Madden NFL 17’s cover athlete. He spent most of the season on the Injured Reserve list. Extra credit: To tempt fate even further, in a series of Facebook videos, Brady undertook several actions usually known to trigger bad luck– the fearless QB walked under a ladder, broke a mirror, and then showed up in a protective bubble issued by the team. We assume that at some point he will also spill salt without throwing some over his shoulder afterward, and try to get a black cat to cross his path. Stay tuned. If you see a plague of locusts heading north, you’ll know they’re headed for Gillette Stadium in Foxborough, the Pats’ home field.

3. NBA’s Boston Celtics go for organic growth. Must know: As discussed in a previous TWIST, nearly all the top players in the NBA are seeking to align with other top players during the offseason to form “super teams” capable of taking on the champion Golden State Warriors. Nice to know: The Boston Celtics are bucking this trend and growing their own talent. At the end of the 2013 season, they embarked on a rebuilding effort, hiring college wunderkind Brad Stevens as the new coach and trading two star players to the New York Nets. Following a “Moneyball” strategy of targeting undervalued talent, the team began stockpiling future draft picks (the team executed 21 trades that helped bring back 16 future draft picks to Boston.) Heading into the season, the team roster is shaping up to have six rookies, plus two more contributors still on their rookie contracts. Word on the street is that they may be real contenders this season in the Eastern Conference, especially with the Cleveland Cavaliers in a bit of disarray. Extra credit: Speaking of the Cavs, late last week strong rumors circulated that LeBron James will almost certainly leave the team when his contract is up at the end of this season. Speculation is that LA is his goal, and that he’d be fine with either the Lakers or the Clippers. All-Star guard Kyrie Irving, who shocked the league last month by asking to be released from the Cavs, is now in play as management determines the best course for the future. Watch this space for further updates. So much drama . . . who says sports isn’t interesting?

A couple of updates on stories we’ve been following. For those on Colin Kaepernick watch, the player remains a free agent as of this writing. A protest is planned at NFL headquarters in New York on Wednesday August 23 to highlight what is being perceived by some as unfair consideration of the quarterback’s candidacy by NFL teams due to his silent protest against police brutality last season during the National Anthem.

Yankees rookie slugger Aaron Judge leads the American League in home runs with 35, but he has been in a terrible slump since his superstar performance in the Home Run Derby last month. Judge has struck out a Yankees-record 29 straight games and is batting .161 since the All-Star break with 43 strikeouts. He’s handling it with grace, though, telling hometown paper the New York Post “For me, it’s just that time of year. Everyone goes through these ups and downs. You are going to get out of this. It’s just part of baseball . . . I just have to keep grinding, it will all work out.”

As expected, last Tuesday Dallas Cowboys’ running back Ezekiel Elliott filed an appeal of his 6-game suspension for off-field behavior. The NFL has 10 business days from the filing date to schedule a hearing in the case.

“Super-fight” night in Vegas is this coming Saturday, August 26th. The face-off between undefeated champion boxer Floyd Mayweather and UFC lightweight champion Conor McGregor is the talk of the sports world. Last Wednesday, the Nevada State Athletic Commission approved the request from the two combatants for smaller boxing gloves (8 ounces instead of 10.) Mayweather has fought the majority of his career in 8-ounce gloves and McGregor is used to 4-ounce gloves. On this issue at least, there was no trash talk. The Commission also named veteran official Robert Byrd as the bout’s referee (which is an important role in protecting the health and safety of both fighters.) It’s time to finalize your friendly wagers. The Vegas odds continue to tighten, moving in McGregor’s favor – but Mayweather is still the odds-on favorite. The current line is Mayweather -450, McGregor +325. Get your swagger on, and put $10 down on McGregor. What have you got to lose?

18 days until the start of the NFL regular season. That’s it! You’re good to go. See you next week.