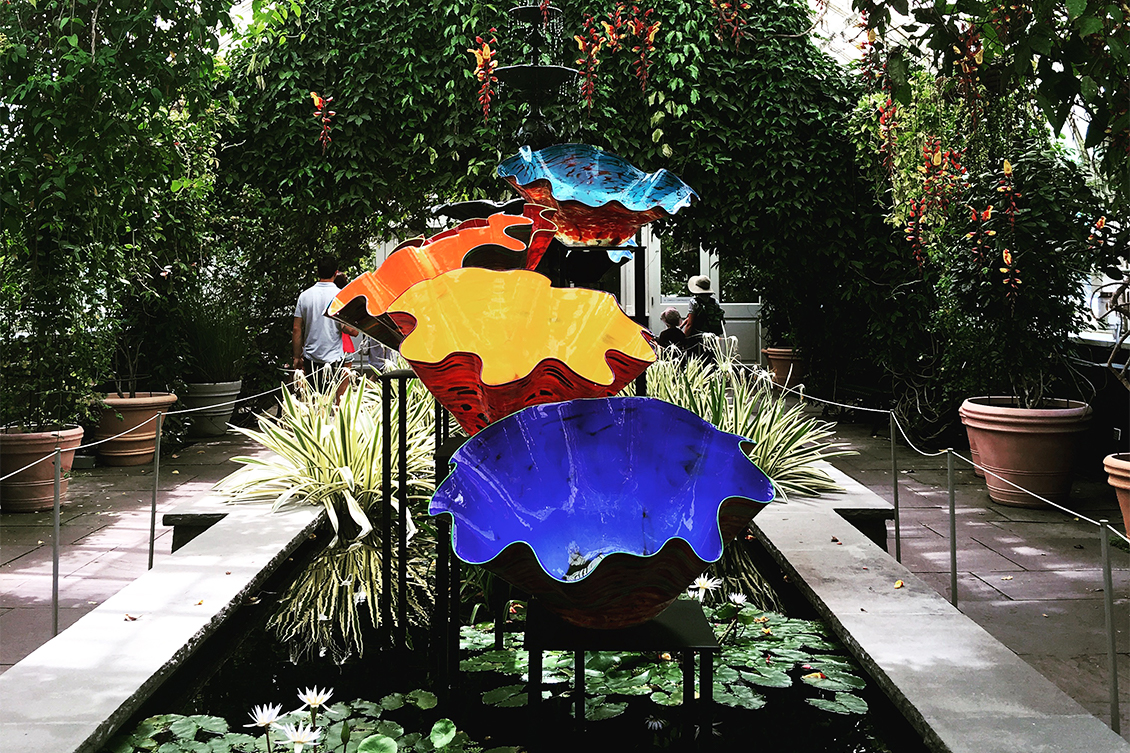 If you love gardens, sculpture, grace and beauty, head to the New York Botanical Garden on the next fine day that comes your way. Artist Dale Chihuly has installed site-specific glass sculptures there for the first time in ten years, and it’s definitely worth a visit.

And we’re not just saying that because one of them bears a striking resemblance to a dandelion chandelier.

Seriously, it may sound like hyperbole, but this particular exhibit is one of those don’t-miss events in the life of the city that will linger in your memory long after it’s gone.

Our family still has vivid memories of the magnificent artwork “The Gates” in New York’s Central Park. Installed in February 2005 by Bulgarian artist Christo Yavacheff and French artist Jeanne-Claude, the work featured 7,503 “gates” with free-hanging orange-colored fabric panels that stirred in the wind. The effect was as if a vibrant swirling river coursed through the park, appearing and disappearing through the bare branches of the trees. You could see it from a great distance, and if you were lucky, you got to experience it both on the ground and from a rooftop or swanky apartment with a view of the park. It was absolutely magical, and it gave us the promise of spring in midwinter.

Trying to describe it to someone who didn’t see it firsthand is nearly impossible. Sometimes words fail. This is why you must hurry along to the New York Botanical Garden.

Because like “The Gates” and other successful installations of public art works around the world, sometimes the transformation of a familiar space by an artist renders it forever changed, even when you see it after it’s been restored to its original state. If you don’t see it, you’ll be kicking yourself later.

We saw “Chihuly at the Garden” with a group of friends during the summer of 2006. It was our first introduction to the artist and his work, and we still share fond memories of how stunningly beautiful and whimsical it was. We think this new exhibition is even better.

In case you’re not familiar with the name, a quick introduction of the artist is in order: Dale Chihuly is a seventy-five year old glass sculptor and entrepreneur, originally from Tacoma, Washington. His work has been included in over two hundred museum collections globally, and is currently on display all over the world. In the US, you can find it from now until the end of the year at the Catalina Island Museum in California; the Fred and Pamela Buffett Cancer Center in Nebraska; and the Crystal Bridges Museum of American Art in Arkansas.

And we sincerely hope that you’ve already visited the New York Botanical Garden (NYBG); it’s a gem of a place with a wonderful origin story. Located in the Bronx, just steps from a commuter rail station for easy access to the city, the Botanical Garden was inspired by Nathaniel Britton’s visit to London’s Royal Botanical Gardens in 1888. Convinced that New York City should have such a place, he launched a public campaign to establish a non-profit institution. Pierre Lorillard IV, a wealthy racehorse owner, and his family owned most of the land that is now the Garden; the parcel was purchased by the City of New York in April of 1891, and used to build the NYBG and the Bronx Zoo.

The Garden is divided into fifty sections, with over one million varieties of plants, a waterfall, and the largest remnant of untouched forest in all of New York City. In addition to being a splendid respite from city life, the NYBG is also a major educational institution. Its mission is to conduct research on plants with the goal of protecting and preserving their habitat, as well as to teach the public about plant biology, ecology, and horticulture. There are family garden plots and a wonderful Children’s Garden with a maze and a splash fountain. The Garden’s research facility has discovered eight million different species of plants, making it the fourth largest herbarium in the world.

For the current exhibit, Chihuly has provided the NYBG with 20 installations, specifically crafted to complement its scenery and plant life, and with them, the Garden has become a wonderful treasure hunt. It’s as if mischievous artistic elves had spent the night hiding gems around the property, and now you have the fun of finding them. The pieces are playful, whimsical and engaging. It would be extremely hard to be in a bad mood after spending half an hour here.

The works are spread throughout the space, so that you can wander, explore and discover them. Several are concentrated in and around the iconic Enid Haupt Conservatory, and that’s a great place to start.

The vignettes you’ll find there are particularly well-conceived: if you follow the route suggested by the Garden, several times you’ll turn a corner, and there’ll be a lovely diorama waiting to be explored: a lily pond, floating rectangles, a gossamer pink tree, stunning blue glass reeds. In some cases the glass flowers are nearly indistinguishable from the real ones.

As you continue your exploration, you’ll start to see the variations in the artist’s palette: some of the works are bold and brassy: a towering red and yellow tree, an acid-yellow dandelion gone wild, jewel-toned oversized blooms in the lily pond. And some are quite delicate and whimsical – a tangle of pastels in an abstract installation near a pond; a cluster of milky-white beluga tucked behind a grove of tropical palms; levitating rectangular objects in another pond; a gorgeous rose-colored tree inside the conservatory.

The installations in the two fountains on the grounds are among the most spectacular. The one in front of the Mertz Library is highly reminiscent of the Trevi Fountain in Rome. The more rustic and conceptual one at the entrance to the Children’s Garden is striking – its red color can be seen from paths many yards away, and the lure to come closer to see it is irresistible.

Our favorite piece? A spectacular sapphire-blue sculpture that to our eye looks quite a bit like a dandelion chandelier. It certainly radiates the energy and sparkle of one. We’re going to go ahead and claim it as one of our tribe, ‘cause why not? It’s incredibly beautiful.

There is poetry composed by New York City school children placed on nearby placards to accompany each sculpture. Having poetry placed near the plants is something the Garden has been doing for a while now, but it’s especially lovely that these are the works of budding poets, not canonical works (although we love re-reading those, too).

You can see many of the works on foot without needing to be a tri-athlete. The Garden is quite large though, and the summer heat can be intense. So if you choose, you can take a Tram Tour, and see the entire installation throughout the Garden without breaking a sweat.

Grab a bite while you’re there: in summer there are food trucks, charming outdoor café tables and quick nice meals to go at the Pine Tree Café – or you can have a proper sit-down meal at the inviting farm-to-table restaurant Hudson Grill. Both are easy walking distance from the Conservatory.

If you’re seeking an even more sophisticated experience, make plans to see the exhibit during one of the evenings when the NYBG is open after dark. On “Jazz and Chihuly” nights, you can enjoy a concert under the stars developed in collaboration with the Catskill Jazz Factory and Absolutely Live Entertainment. Once the concert is done, you can view the glass sculptures as night falls – and see the newest work in the collection – Neon 206, which lights up in dramatic fashion just outside the Haupt Conservatory.

There are many ways to spend a luxurious couple of hours viewing this exhibit, and you’ve still got plenty of time to see it – it closes at the end of October. Just promise us you won’t miss it – and give our regards to the dandelion chandelier.