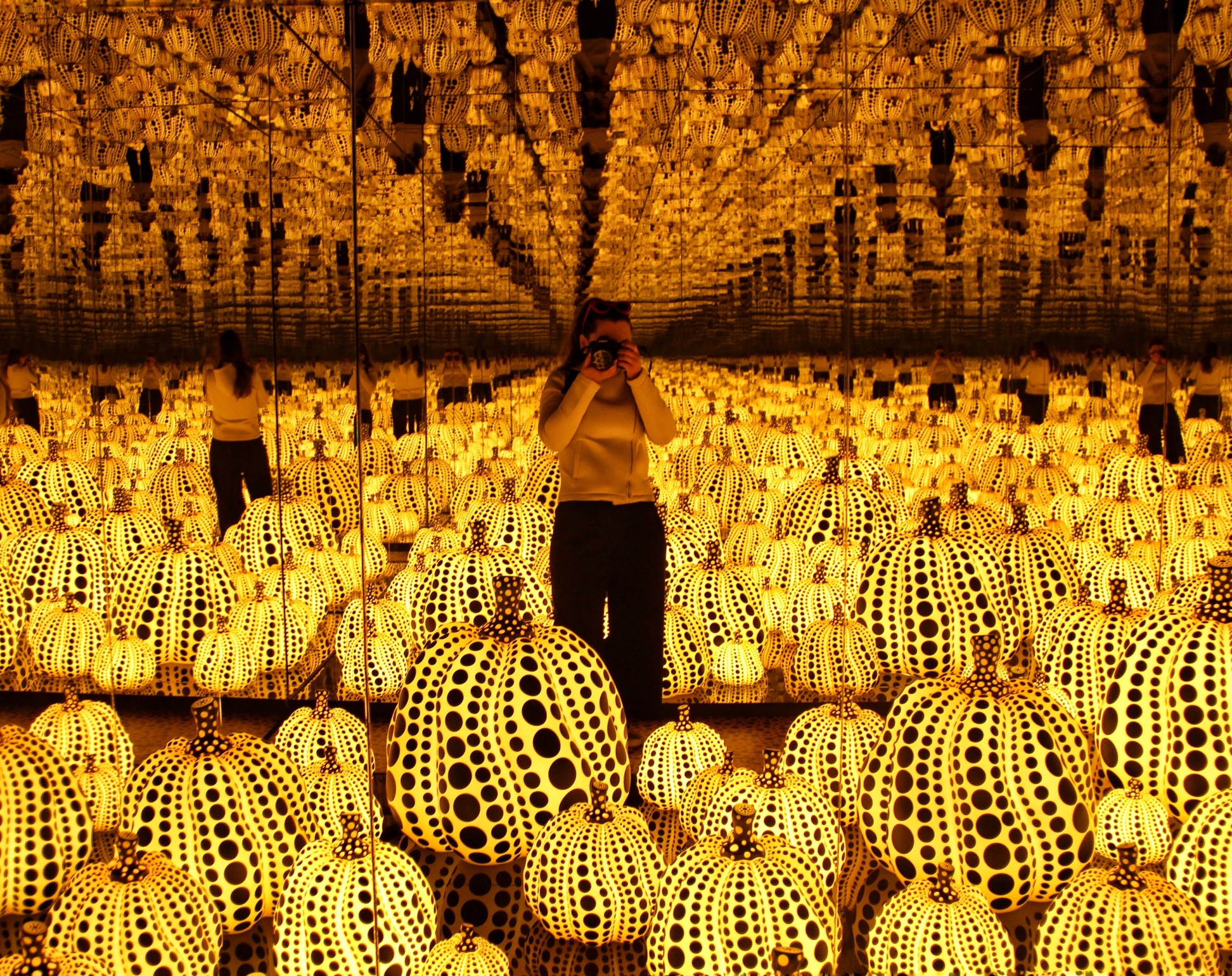 Where can you see Yayoi Kusama this year? For starters, on Instagram. If you haven’t seen at least one Yayoi Kusama Infinity Mirror pic on Instagram this year, then you clearly have not been on Instagram this year. A blockbuster exhibition of works by the 88-year-old artist – one of Japan’s most celebrated – has been on tour since late February, and it has definitely become A Thing. If you weren’t already familiar with the work of the red-wigged avant-garde artist from her 2012 collaboration with Louis Vuitton, or her inclusion on TIME magazine’s 100 Most Influential People last year, you’ve surely heard about her by now. The Infinity Rooms are comprised of repetitive patterned objects: pumpkins, balloons, phallic objects and the like. When visitors step inside the mirrored spaces – the limit is three people at a time – they become immersed in a dazzling swirl of light and color, including images of themselves.

Born in Matsumoto, Nagano prefecture in 1929, Kusama was raised in a strict household where her family was unsupportive of her interest in art. Nevertheless, she persisted – first studying in Japan, then moving to New York City in the 1950s.

The artist produced her first Infinity Mirror Room, Phalli’s Field, in 1965. The story behind it proves the point about necessity being the mother of invention. Kusama had spent much of her time for the prior three years sewing thousands of stuffed fabric tubers and grafting them to furniture and found objects to create her Accumulation sculptures. Her aim was to exhibit the works together to create overwhelming hallucinatory scenes. But the labor involved in making them was so taxing that she started to utilize mirrors to achieve a similar effect. This technique allowed her to achieve her vision, transcending the physical limitations of her own productivity. They also created a participatory experience, by casting the visitor as the subject of the work. Brilliant.

Over the course of her career, the artist has produced more than twenty distinct Infinity Mirror Rooms. The exhibition currently on tour — Yayoi Kusama: Infinity Mirrors, organized by Hirshhorn Museum and Sculpture Garden curator Mika Yoshitake —presents six of them, the most ever shown together. The show also includes a selection of Kusama’s large-scale installations, paintings, sculptures and works on paper from the early 1950s to the present.

Mounting such an exhibit is an exceptionally clever way to get more people – especially the highly desirable and elusive millennial contingent – to engage with art museums. And it’s working. The blockbuster show broke attendance records at the Hirshhorn this spring, and membership at the museum rose 6,566 percent. The same explosion of interest is unfolding at the moment at the Seattle Art Museum, where the exhibit will remain until September 10th.

The frenzy isn’t limited to America: exhibits earlier this year at the Matsumoto Japan Museum of Art in Tokyo and at the National Gallery Singapore saw snaking queues and hours-long waits for admission as well.

Itching to see this phenomenon for yourself? Here are all the places that you can experience one or more of Kasuma’s Infinity Mirror Rooms – as well as her other work – during the month of October 2017 and beyond. Tickets are already on sale – and in some cases, already sold out – but more will be become available later this month.

–Tokyo. The artist is opening her own museum in the Shinjuku neighborhood of Tokyo; the five-story building designed by Kume Sekkei will solely feature Ms. Kusama’s work; the first exhibition, Creation Is a Solitary Pursuit, Love Is What Brings You Closer to Art, will feature a recent series of paintings, My Eternal Soul – Oct 1-Feb 25, 2018

–Dallas. The Dallas Museum of Art will showcase its recently-acquired work by Kusama, an “Infinity Mirror Room” installation titled All the Eternal Love I Have for the Pumpkins (2016). Originally on view last year at Victoria Miro Gallery in London, the installation is comprised of a series of acrylic yellow gourds covered in black polka dots. The museum is touting the work as “Kusama’s first mirror-room work featuring her pumpkin sculptures since 1991,” and notes that “no other museum in North America has a similar work” – Oct 1- February 25, 2018

–Los Angeles. The Broad’s first visiting special exhibition will be Yayoi Kusama: Infinity Mirrors. Tickets went on sale on the museum’s website over the Labor Day weekend, and were immediately sold out (reportedly, over 100,000 people tried to get them, all at the same time). A limited number of same-day timed tickets will be available when The Broad opens each morning. And there’s always Craig’s List – Oct 21-Jan 1, 2018

–Abu Dhabi. The New York University Abu Dhabi Art Gallery’s Inventing Downtown New York: Artist-Run Galleries, 1952–1965 will investigate the New York art scene between the peak of Abstract Expressionism in the early 1950s and the rise of Pop Art and Minimalism in the early 1960s and will include works from Kusama – Opening October 4

There are many public places to see the artist’s work on a more permanent basis. For example, in Singapore, the rooftop garden of the Orchard Central mall displays a mixed-media art installation titled Let’s Go to a Paradise of Glorious Tulips. The flagship Louis Vuitton store on Fifth Avenue in Manhattan features one of her works underneath its central staircase. The Phoenix Art Museum has a permanent display, and the Sky condominium complex in New York has a site-specific installation of one of Kusama’s pumpkins.

But the most magical, bucket-list way to see the artist’s work might be traveling to the island of Naoshima in Japan’s Seto Inland Sea. There you’ll find two site-specific installations: a giant red pumpkin and a smaller yellow one on an undeveloped beach.

If you can’t wait, or won’t be visiting any of these spots, you can purchase the Yayoi Kusama: Infinity Mirrors exhibition catalog online from the Smithsonian Store for $49.95. And the whole family can get in on the act: on September 26, MOMA will publish Yayoi Kusama: From Here to Infinity, a children’s book written for 4-8 year olds.

As with exhibits of the works of glass artist Dale Chihuly the Infinity Mirror Rooms will be a visual feast that will last for only a short period of time. The good news is that Kusama is still actively creating in her Tokyo studio, which makes us all feel downright slothful.

If you visit any of these museum exhibits in the coming weeks and months, we’re sure that you’ll bring your camera or smartphone. Just promise us that you’ll also take at least a few precious seconds to actually experience the works themselves. As we learned during the recent total solar eclipse in the US, a stellar moment can become compromised or lost entirely in the process of trying to document it. The true luxury is letting the works transport you, at least for a few luminous seconds.