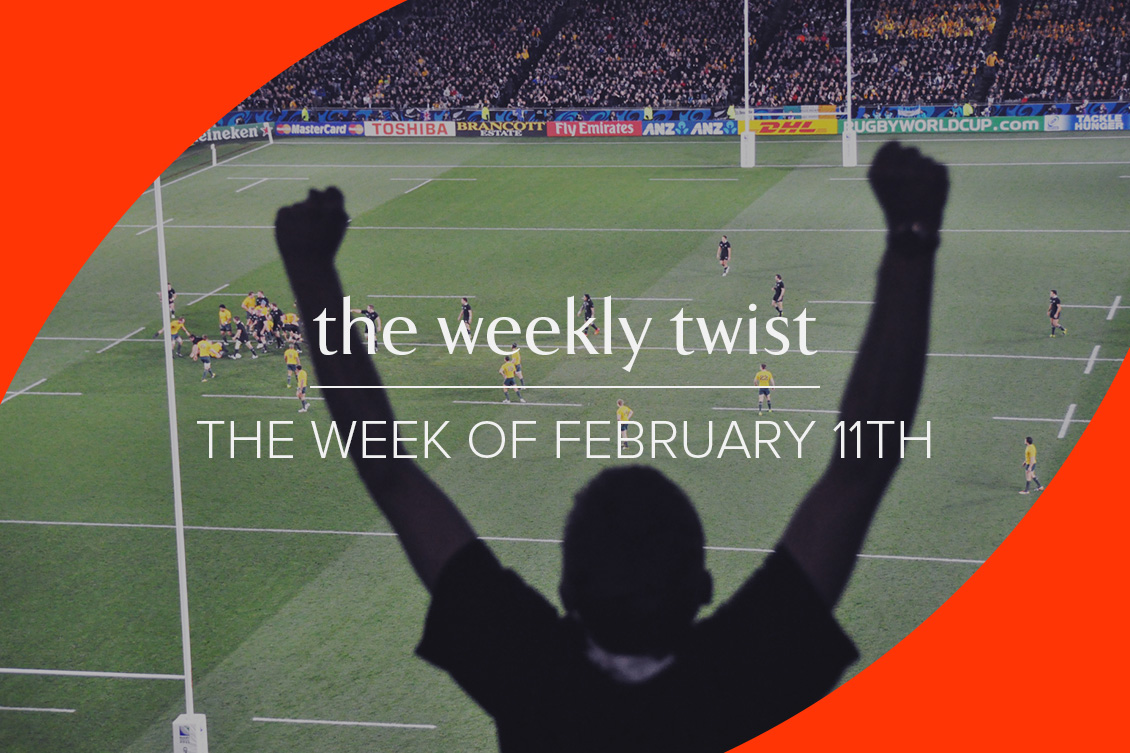 This week’s edition of TWIST: This Week in Sports Talk begins with the news that Team Dandelion Chandelier very nearly won our otherwise all-male NFL pool this year! We came in second, managing to beat all but one of the boys. We won’t subject you to the video of us doing the chicken victory dance. But it was sweet. Of course, number 2 is not good enough. We know that. Next season? Going for Total Victory.

In all seriousness, if you can, you should join (or start) a friendly sports pool with the people in your life who passionately follow sports – could be the NFL, NBA or MLB, doesn’t matter – you’ll learn a lot, and it’s also huge fun. And don’t worry about losing the family farm: in our pool, we put $1 down per game, and the winner buys the burgers at the end of the season.

1. Super Bowl 52 aftermath. Must know: The NFC Philadelphia Eagles defeated the AFC New England Patriots in a stunning upset at last Sunday’s Super Bowl LII in Minneapolis, 41-33. Mad-crazy joy erupted in Philly, and QB Nick Foles was named Super Bowl MVP in a true Cinderella story (he was the back-up QB and was only starting because Carson Wentz suffered a season-ending injury). Nice to know: For the 1,000th time, repeat this phrase: “Defense wins championships.” The Patriots have historically delivered record-setting offensive performances and weak defensive performances. As the Executive Editor of our Sports Desk (who’s a die-hard Pats fan) put it: “one stop by the Patriots defense on the Eagles last drive would have probably won the game for the Patriots, but they couldn’t do it.” Extra credit: Believe it or not, Foles could soon be traded to another team even after this amazing feat – Wentz is expected to fully recover and return to the starting QB position, and it would be bizarre to have the Super Bowl MVP as the Eagles’ backup. In other NFL news, after Patriots offensive coordinator Josh McDaniels verbally accepted the job as head coach of the Indianapolis Colts, he reneged at the last minute and will stay in Boston. With that move, the Pats’ power leadership team remains largely intact for the 2018-19 season.

2. Trade deadlines in NBA. Must know: Just as the deadline was closing this Thursday, the Cleveland Cavaliers made a flurry of trades to position themselves for the post-season. 6 players in their 11-player roster were traded in a series of deals, along with a first-round draft pick. Nice to know: The Cavs’ most significant acquisition this past off-season was Isaiah Thomas from the Boston Celtics. After having seen almost no impact from him all season, they’ve traded him to the LA Lakers. Other players traded: Jae Crowder, Channing Frye, Dwyane Wade (he’s going to the Miami Heat, the team from which he wants to retire), Iman Shumpert, and Derrick Rose. Extra credit: The Cavs have been on a losing streak, and have seemed stuck in a collective funk for most of the season. These moves were done in part to ensure that superstar LeBron James is happy (in the hope that he might remain with the team after this season).

3. Winter Olympics kick off. Must know: North and South Korea have been the news-makers of the Games so far, and not because of what’s happening on the field of competition. The two countries’ teams marched under a new single flag depicting a united Korean peninsula during the Opening Ceremony, and there seems to be a potential rapprochement in the works. Nice to know: In downhill skiing, the American women are expected to be the stars – Mikaela Shiffrin (whose helmet bears the decal A.B.F.T.T.B. – Always Be Faster Than The Boys) and Lindsey Vonn have both been on fire in the run-up to these games. But the first gold medal for Team USA was won today by Red Gerard in the men’s slopestyle competition. Extra credit: Tongan flag bearer Pita Taufatofua stole his second opening ceremony (after his initial star turn in Rio). Despite the frigid temperatures, the cross-country ski competitor (previously a taekwondo combatant) from the Pacific island marched shirtless, in a grass skirt and sandals, and won the adoration of the crowd for a second time. In fairness, we should also note that the Bermudian flag bearer was wearing – of course – Bermuda shorts. The K-pop music was jammin, and it was all good.

And now, as we close for the week, and wave up at the Eagles fans who are still swinging from the rafters and telephone poles in celebration, let’s pause for a moment and let the Patriots fans have one last cri de cœur as the season ends. Here’s what they have to say about what went down last weekend:

-Malcolm Butler, the Pats’ defensive back, had a stellar season and was the best in his position of the available players on the team during the game. But Bill Belichick benched him. No one knows why. Was Belichick angry at him? Did he violate a rule?  He is leaving as a free agent? Who can say? Whatever the reason, many Patriots fans blame Belichick for making a stubborn decision that may have cost them the Super Bowl.

-Matt Patricia, former defensive coordinator for the Pats, will now be the head coach of the Detroit Lions, and the word on the street in Patriots Nation is “good riddance to bad rubbish.” To say that there are some hard feelings about the man who led the worst defensive performance in the history of the Super Bowl would be a gross understatement. The dude should probably flash deuces and clear out of town quietly and quickly.

-Pats’ partisans believe that every referee call went against them, citing – among other things — two Eagles touchdowns, “at least one of which would certainly have been overturned in the regular season.” They acknowledge that blaming the ref is like shooting the messenger. But still.

-Tom Brady delivered a historic performance: threw for a record 505 yards, 3 touchdowns, no interceptions, and a QB rating of 124. But he still lost. That has never happened in the history of the Super Bowl, or in any NFL playoff game, ever. In the words of an anguished Pats fan (caps, spelling and punctuation his): “HOW MANY TIMES IN THE ENTIRE HISTORY OF THE NFL HAS A QB THROWN FOR 500 YARDS, 3 TD’S AND ZERO INTERCEPTIONS AND LOST????? ZEEEERROOOOO!!!!!” Wow. Seems safe to say some folks are feeling a bit bruised by all of this.

Whew! We don’t know about you, but we’re really glad that we got all of that off our chests. We feel a bit better now. And we promise, we’re done.