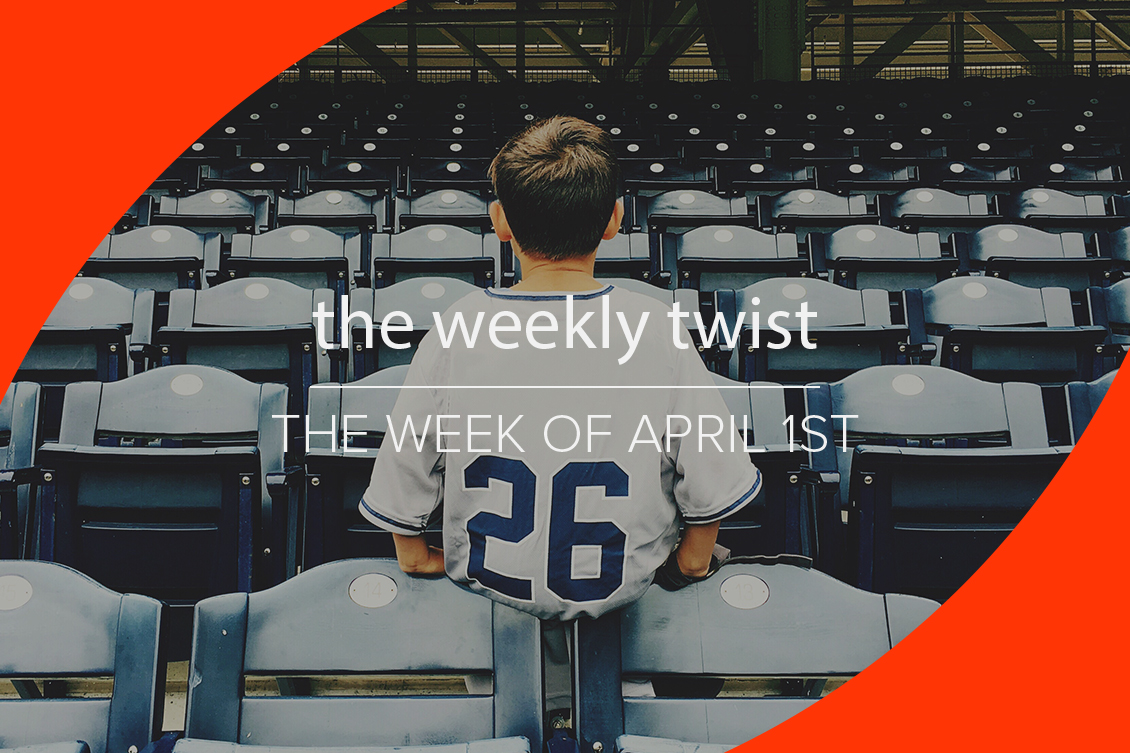 TWIST: This Week in Sports Talk is a weekly recap of the three (and only three) things you need to know this coming week to talk sports. Whether it’s with your boss, the gang at the office, your clients, your barber, your barista, your secret crush, or your in-laws, do the TWIST and we guarantee you’ll be talking sports like a champion in no time.

There’s heartbreak and high drama in Patriots Nation this week. Olivia Culpo (Miss USA, Miss Universe, and Sports Illustrated swimsuit model) has ended her two-year romantic relationship with wide receiver Danny Amendola. The reason for the split is unclear. After five years with the Pats, Amendola has been traded to the Miami Dolphins. People are speculating that either the prospect of a long distance relationship – or the fact that he is no longer a Patriot – must have driven Culpo’s decision. We think the answer to that is pretty obvious. Clearly, Ms. Culpo wants a boyfriend who is with the Pats. Who wouldn’t? Giselle, watch your back, girl.

1. Baseball’s Opening Day does not disappoint. Must know: Thursday was the earliest Opening Day ever. It was also first time in recent memory that all 30 MLB teams were scheduled to play on Opening Day (although in the end, there were a few rain-outs). Excitement was high, and the players delivered with some great ballgames. Actually, you could be forgiven for thinking that it was the Home Run Derby. Nice to know: Giancarlo Stanton hit a home run in his first at-bat for the Yankees. Apparently, it was the hardest-hit opposite field home run ever. And it’s only the first game of the season. In related news, in the first game, at the first pitch of season, Ian Happ of the Chicago Cubs hit a homer off of Derek Jeter’s Miami Marlins. Extra credit: The Houston Astros’ George Springer, the World Series MVP, hit a leadoff homer in the team’s season opener for the second year in a row – it’s the first time in MLB history that it’s happened. These dudes are obviously eating their Wheaties. It’s gonna be a great season.

2. NCAA March Madness and NBA regular season in the home stretch. Must know: The Final Four of this year’s NCAA’s March Madness tournament is in the record books. This has been a historic year of Cinderella stories and shocking reversals of fortune. On the women’s side, Notre Dame defeated the UConn Huskies in a stunner in overtime in the Final Four – they’ll play Mississippi State in the finals. On the men’s side, Villanova and Michigan are the last teams standing; they play for the championship on Monday. Nice to know: The March Madness story that even casual observers followed this year is Chicago-Loyola and its run of upsets. It came to an end as they lost to Michigan in the Final Four. Team Chaplain Sister Jean Dolores-Schmidt, 98, attended every game and proved to be a wonderful good luck charm and fan favorite. Extra credit: The NBA regular season ends in two weeks. The Houston Rockets have clinched first place in the West, dethroning the fearsome Golden State Warriors. Steph Curry is hurt again, and will miss the first round of the playoffs. Bonus Round: During Friday’s game, the Cleveland Cavaliers’ LeBron James scored in the double figures for the 867th consecutive regular-season game, surpassing Hall of Famer Michael Jordan for first place on the all-time list of consecutive games played with at least 10 points. Awesome.

3. NFL new trades and new rules. Must know: The second phase of free agency continues, as does positioning for the draft on April 26-28. The headline this week was the LA Rams and their moves to build a dominant defense. They signed “bad boys” Ndamukong Suh; Aquib Talib; and Marcus Peters. Some think that this is a sign of arrogance on the part of head coach Sean McVay, who apparently thinks that he can coach anyone. Other related topics? Pittsburg Steelers’ star running back Le’Veon Bell is miffed that the team won’t finalize a new deal with him until after the draft. He’s been franchise-tagged for the second year in a row, despite his desire to become a free agent, and he feels disrespected. There’s a lot of talk about whether the New York Giants will trade Odell Beckham Jr., and whether the Pats will trade Rob Gronkowski. Nice to know: There’s a new NFL rule prohibiting the use of players’ heads and helmets in any way. It’s meant to reduce the risk of concussion or more serious injuries. Extra credit: The NFL’s long-despised “catch rule” has been officially amended (it defines what actually constitutes a catch for scoring purposes, and has been a source of fan agita for many years). You would think they would have figured out what constitutes a catch long before now, but better late than never. Fans of the New England Patriots would like for you to know the following: “Many contend that the comments of the referees indicate that the new catch rule was used during the Super Bowl – even before it was ever decided – thus costing the Patriots the Super Bowl.” Yes, we’re still angry about that. You didn’t think those wounds would already be healed, did you?

A catch rule Day of Infamy: Former Detroit Lions’ wide receiver Calvin Johnson’s 20-yard touchdown catch was ruled incomplete due to his “inability to control the ball all the way to the ground.”

Team Dandelion Chandelier is holding its own in our friendly March Madness pool – as of this posting, we’re in a three-way tie for number 4 out of a group of 30 players. We don’t win a prize unless we finish in the top 5, so this is becoming a nail-biter. Wish us luck!