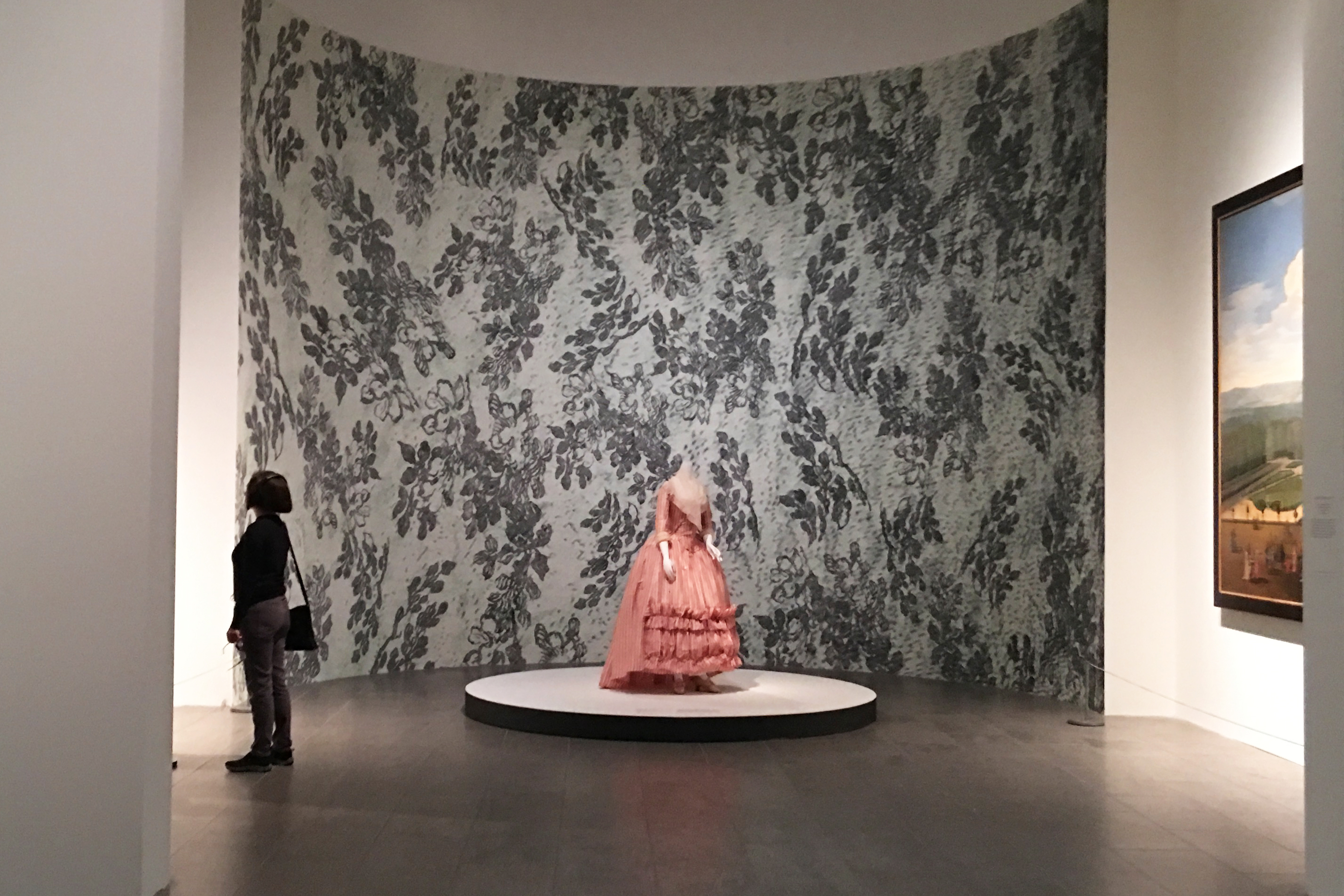 Springtime in Paris is a glorious experience. But if you can’t get there this year, you can experience at least a small measure of the loveliness and grandeur of the City of Light at the Metropolitan Museum in New York. The exhibit Visitors to Versailles 1682-1789 is a glimpse into the elegant, mysterious and decadent milieu of the famous French palace on the outskirts of Paris. If you’ve never visited Versailles, this is a nice introduction. And if it happens to be a favorite historical destination, this will remind you of all the reasons why.

We spent a morning at the Met recently and this was one of the exhibits we enjoyed the most. If you love fashion – and we do – the swirls of rich color and texture in this exhibition will prime your palette for the upcoming Costume Institute exhibit about fashion and the Catholic imagination. And the delicate and intricate sculptures will transport you, at least temporarily, to an era of grace, charm and cloistered privilege far from the cacophony of New York City.

Louis XIV, aka The Sun King, transformed the estate of Versailles from a simple hunting lodge into one of the most spectacular and romantic public courts of Europe – it was designed to be the architectural embodiment of his absolute rule as monarch. Its monumental royal gardens alone took 40 years of cultivation to complete.

The golden era of the palace lasted from 1682 – when the King officially moved his court to Versailles – to 1789, when the Royal Family was forced to return to Paris during the French Revolution. Three Bourbon monarchs made the palace their permanent residence during that time: Louis XIV, XV and XVI.

The experiences of visitors to this ornate and dazzling seat of power are explored in the current exhibit at the Met: who were they? What did they wear? What did they see, eat and listen to? What gifts did they bring? What souvenirs did they take home? And what did they think of it all? The Met provides a splendid overview that addresses all of those questions. It’s beautifully staged in gorgeous tones of regal purple, gold, damask, and marble. The exhibit’s dimly-lit hallways echo the legendary mystery of Versailles — what’s going on in the shadows is often by far the most interesting element. In addition to being a treat for the eye, this is a fascinating and provocative time-travel trip to the Hall of Mirrors and beyond.

Who visited? The splendor of Versailles drew visitors from all corners of the globe: European diplomats and royals, artists, scientists, landscape designers, architects, Grand Tourists from America, tourists from neighboring European countries and everyday French citizens all made the pilgrimage to see its wonders. Visitors came from as far away as Thailand, India and Tunisia to attend receptions and in some cases hold meetings with the King. But not every visitor had business with the King – the grounds were open to the public, with the only requirement being that one was decently dressed.

Versailles has always had an aura of seduction and intrigue, some of it well-founded in historical fact. For example, for security reasons, royals and religious leaders from other countries often visited the palace incognito, using a pseudonym. These included the Holy Roman Emperor Joseph II, the Archduke of Austria, and the King of Sweden. Members of the household staff knew when such a visitor — or someone’s mistress — was being surreptitiously escorted onto the grounds, which we imagine made for lively gossip after hours.

Among the more famous visitors was Benjamin Franklin, the first official visitor on behalf of the American government. He stayed from 1776-1785 and became a popular bon vivant and  celebrity in the court of Louis XVI. John Adams and Thomas Jefferson also visited to ensure that the French would continue to support them in their war against the British.

What they wore. John Adams, the minister to France and future President, wrote in 1782: “The first Thing to be done, in Paris, is always send for a Taylor [sic] . . . this nation has established such a domination over fashion that neither clothes, wigs or shoes made in any other place will do in Paris.”  Some things never change! We feel you, President Adams. You can’t show up in France just wearing any old thing. The dress code for men was a coat with matching breeches and waistcoat and a tri-cornered hat. Women were required to wear a formal gown with a train when meeting with the King.

For strolling in the gardens, the women’s dresses were allowed to be shorter and worn with heeled shoes. The Bourbons, even the young king Louis XV, wore highly embellished attire when receiving overseas diplomats and other guests.

If you want to explore this particular element in far greater detail, have a look a new book published earlier this year: Fashion and Versailles by Laurence Benaim with a foreword by Catherine Pegard is a comprehensive account of the influence of Versailles on contemporary fashion.

How they traveled. The palace is about 12 miles west of Paris, and in the 1700’s it was a 2-hour journey by carriage. But some visitors found it more expeditious to arrive by water – there was daily barge service from the Pont-Royal near the Tuileries in Paris.

What they saw. The buildings and grounds of Versailles are magnificent – their scale is almost overwhelming, and yet the magic of exploring them is in discovering the many hidden alcoves, secret gardens, and whimsical encoded messages in its fountains and statuary. There’s a playful wit at work in much of its design that’s engaging and that brings the enormous property down to human scale. The Met conveys some of the palace’s wonders via paintings and wall panels to illustrate what visitors would have seen upon arrival, for example at the Parade Grounds in front of the palace.

Artists happily captured the grandeur of many of the distinctive architectural elements of Versailles. For example, the One Hundred Steps were built in the 1680’s to make maximum use of the sloping topography from palace to garden.

Despite the thrill of touring the magnificent grounds, the true high point of a visit for everyday travelers was getting a glimpse of the King and the royal family. They were permitted to watch as the ruler made his way to Morning Mass, or they could attend a Grand Couvert, held several times a week, where they could observe as the sovereign and his family dined in public. Yes, you heard that correctly: people lined up to watch the sovereign and his family eat. The meals were full of delicacies and intricately-crafted desserts that were beautiful and tantalizing. Are you beginning to understand the roots of the revolution?

Despite the public access granted to most of the grounds, not surprisingly the apartments of the king and queen were generally off-limits to visitors, as was the Petit Trianon, Marie Antoinette’s personal domain. The exhibit provides a peek at these private spaces and some of the hand-crafted furnishings from these rooms that still survive.

Examples of the furnishings in the private quarters of Versailles Photo Credit: Dandelion Chandelier

Throughout the royal gardens there are whimsical fountains and sculptures, inspired in many cases by literature and fables, that can still be seen today. In the Labyrinth, which fell into disrepair and no longer exists, Aesop’s fables “The Wolf and the Crane,” “The War between the Birds and the Beasts,” and “The Eagle and the Fox” were among the inspirations for what became a collection of three hundred figures, the largest ensemble of animal sculptures in the world until the 19th century. The fountains were fancifully designed and engineered to make it appear that the animals were communicating with one another.

A fountain from the Labyrinth at Versailles Photo Credit: Dandelion Chandelier

All visitors could purchase souvenirs from a shop inside the royal residence during the heyday of Versailles. Not surprisingly, at the end of the exhibit at the Met, you, too can purchase a memento of your visit – even a set of fine Bernadaud china should you be so inclined.

What the visitors thought of it all. Over the course of the ancien regime, views of the grand palace evolved. At the start, global visitors were awed and inspired by what they saw at Versailles, and their admiration influenced the designs of luxurious gardens and homes around the world. It was viewed as a desirable cosmopolitan destination that fostered cross-cultural exchanges of all kinds. However, by the 1780s, Versailles had come to be seen as “a monument to the vanity and folly of Louis XIV.” On October 5th of that year, a large mob of hungry and starving citizens marched to the palace and forced the royal family to return to Paris, leaving Versailles largely unoccupied for many years.

You’ll leave this exhibit reflecting on a number of things: beauty, arrogance, whimsy and folly. The constructed world, the natural world, commoners and kings. What more can we ask of a museum than to make us think? And to help us see? Well done, Met. We’re quite happy to have been visitors to Versailles. You can catch this exhibit from now until July 29, 2018. And you can see more images at #VisitorsToVersailles.