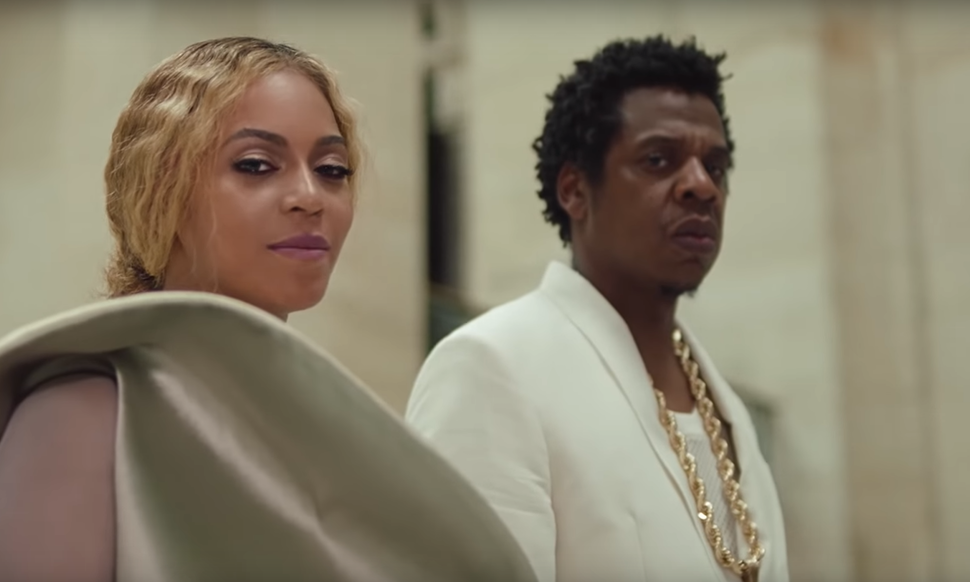 Can’t believe we made it. This is what we’re thankful for. The sound you heard emanating from Paris yesterday was the sound of something dropping. A new music video from the Carters – aka Beyoncé and Jay-Z. But also jaws. And facades. Veils. And masks. Old ideas of beauty. Ancient concepts of privilege. Velvet ropes and restraints. Inhibitions and constraints.

And without a doubt, the mic.

Unless you’ve been working too hard or have been totally off the grid, you’ve already seen the video for Beyoncé and Jay-Z’s latest, Ape*h**. It was filmed after-hours in great secrecy at the Louvre in Paris, and it juxtaposed some of the best-known works of art in the Western canon with the couple, their all-black cast of backup dancers, and every-day images of  black people in America.

It was a meditation and a provocation – visually arresting, profane, beautiful, confrontational, reverent, angry and full of grace. Like any great work of art, it has many layers.

Spoiler alert: If you haven’t seen it – you should. If you want to see it fresh, with no preconceived notions, pause and watch it and then rejoin us.

For everyone else, here are 6 indelible images that have stayed with us – the ones we can’t get out of our heads:

1. Beyoncé as an avenging angel. If you’ve been to Louvre, you’ve seen the grand marble staircase that sweeps upward, presided over by a towering statue: the Winged Victory of Samothrace. Also called the Nike of Samothrace, it’s a marble Hellenistic sculpture created in the 2nd century BC. It has served as the inspiration for many things, including the iconic Nike sneaker “swoosh.” The winged female figure – the messenger goddess Victory – stands atop the prow of a ship. In the video, we see Beyoncé and Jay-Z standing, equally triumphantly, with the statue as a backdrop. With all due respect to Mr. Carter, we couldn’t take our eyes off Beyoncé. She is dressed in a magnificent voluminous pure white gown and cape – sometimes she stands still, sometimes she is dancing. Below her on the stairs are a gathering of black women, lying prone on the marble, and arising at her command.

They’re taking over the Louvre, this modern tribe of female warriors. The hallowed halls have been invaded, and no one will ever be able to see that staircase in quite the same way again. If it reminds you of the female warriors of Wakanda, or the stunning tableau from “Resurrection” by Alvin Ailey, then you’re on the right track.

2. Beyoncé and a line of black women holding hands and dancing together in front of the monumental painting The Consecration of the Emperor Napoleon and the Coronation of Empress Joséphine. Commissioned by Napoleon I, this work by Jacques Louis David was intended to depict the splendor of the emperor’s Coronation. We know how that all ended – and now a cultural Queen Bey is celebrating her own regal status, along with a squad of her black sisters.

3. Two black women framing the Portrait of Madame Récamier. The portrait is of a languid woman at ease on a chaise. In the video, we see two black women sitting underneath, in positions of servitude and readiness – as one commentator pointed out, it’s what would have been in the portrait if we could see beyond the frame: the army of black and brown attendants and servants who waited on the aristocracy.

4. A black woman picking out the hair of a black man seated before the Mona Lisa. There’s a tenderness and intimacy to this scene that is piercing — it reminded us of haircuts around our kitchen table as kids, and later as a parent. And it also evoked the iconic Kitchen Table series by photographer Carrie Mae Weems. For many of us, the message was: this could be you. This could be your son. This is your space, too.

The image serves as the Everything is Love album cover.

5. Quick cuts between images of contemporary black men and women — sometimes with arms outstretched — juxtaposed with details from paintings depicting bondage, war, struggle and despair, including The Raft of the Medusa. The universal human struggle is real – and its been going on for a very long time.

6. A painting of a black woman with a white head scarf: Portrait D’Une Négresse by Marie-Guillemine Benoist. This painting, seen near the end of the film, is seared into our memories. In the context of the video, the subject could be emblematic of an angel, a healer, a priest. A figure of forgiveness and absolution. A witness. Or an accuser, an active questioner — or even the judge and jury.

If you have to ask yourself why it seems so surprising, so shocking, perhaps even so invasive to see black and brown people in iconic poses of Western royalty, and religion, and military might, then you’ve already been touched by this video in the way in which we imagine it was intended.

Like Kehinde Wiley’s heroic portraits, this work of art is a bold statement that everyone is an inheritor of dignity, and stature, and purpose. That black and brown skin are not disqualifiers for anything – not regal bearing, not bourgeoisie respectability, not the inducement of awe nor the bestowing of grace.

We’ve been to the Louvre many times, and we’ve never actually felt that it was for us. We’ve marveled at its beauty, we’ve dutifully noted the histories of the artists and the works on display, and we’ve come away feeling lucky to be in the presence of such master works. But particularly when we’re there as a black family with our children, we’ve felt a pang of disappointment. Because on the rare occasion when we spot someone in a painting who looks like us, it’s always someone in a position of servitude. A man or woman of color meekly tending to the needs of someone else – someone more powerful. We’re the afterthought, the cleaning crew, the disposable ones.

We have always loved the Louvre, but we haven’t ever felt that the Louvre actually loved us back.

In this video, all of that is reversed – the universal desires for love, dignity, purpose, meaning and freedom are made clear. It’s not just people of European heritage who want those things – it’s all of us.

Near the end, we see Beyoncé and Jay-Z sitting together, clothed as Egyptian royalty – they’ve been seen in this pose previously in the video. But in this vignette, they’re smiling, almost like two mischievous children who’ve just gotten away with something.

And they have. They just reclaimed an iconic and majestic space in a way that makes it accessible and relevant – perhaps for the very first time – to all of humanity.

All that from one simple music video? Yes, dear reader. If you can see a dream unfolding before your eyes, then your own unspoken hopes and desires can seem tangible, and achievable and real.

What we see with our eyes matters. Who knows where this might take us next?

We don’t love everything about this video – but we aren’t about to let the perfect be the enemy of the good. It’s more than good enough. And it gets the job done.

What a year of black excellence this has been! Black Panther, a Pulitzer for Kendrick Lamar, an Oscar for Jordan Peele, new sales records for Mark Bradford and Kerry James Marshall, a Royal Wedding, black women artists getting solo exhibitions, and now this. And it’s only June!

Can’t believe we made it. This is what we’re thankful for. Song dropped. Mic dropped. Thank you, Mr. and Mrs. Carter. Well done.