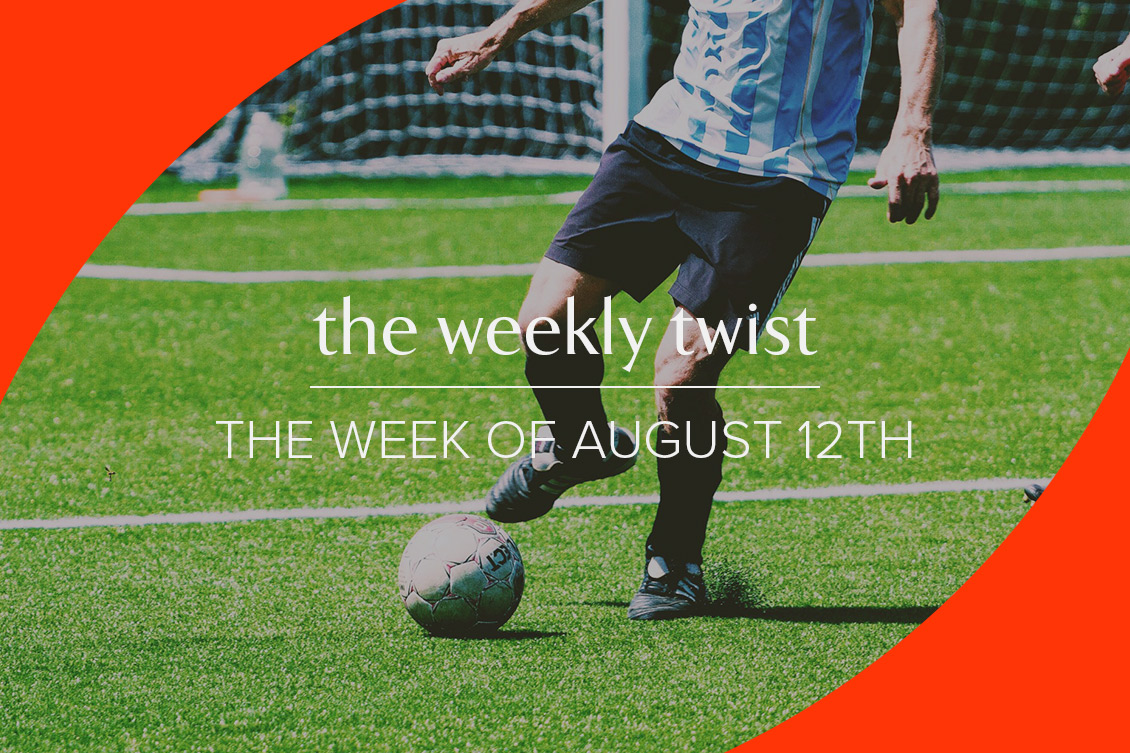 TWIST: This Week in Sports Talk is our weekly recap of the three things you need to know this week to join the conversation about sports. Game on.

We begin this week with all the locker-room gossip from the NFL, as former teammates dish about each other and rekindle dormant grudges. If it reminds you of high school, it should.

Former NFL tight end Martellus Bennett – who played with both quarterbacks Aaron Rodgers and Tom Brady over the course of his career – said this week that while Aaron Rogers has the best arm, Tom Brady is the best teammate, because he is very precise on where he wants you to be and throws it right on the money. We love that he had something nice to say about both of them.

Meanwhile, the Buffalo Bills‘ Kelvin Benjamin has a beef with his former Carolina Panthers teammate, quarterback Cam Newton. In an interview, Benjamin claimed that Newton ruined his career, and that had he been paired with a “an accurate quarterback with knowledge,” he would now have a distinguished NFL record. The two met up on the field at the first Preseason game, and had words (on camera, of course). Our Sports Desk reports that Newton apparently wanted to mend fences and Kelvin wasn’t having it. Dang, that’s cold, dude. For the record, the Panthers won that game 28-23. The two teams aren’t scheduled to play again until 2021, at which time we hope this feud will have resolved itself amicably.

On a happier note, in the MLB the hall talk is all about the redemptive power of true love. A recent article quotes Houston Astros ace pitcher Justin Verlander as crediting his wife, super model Kate Upton, with saving his career. Four years ago, he was hurt, pitching poorly, had to have surgery, was suffering from depression, and was basically ready to call it quits. It was Kate who coached him back to being one of the best pitchers in the game again, helping him understand the pressure of being a celebrity, getting older, and dealing with setbacks. Those of you who questioned why Verlander skipped the victory parade for his World Series win last year because it was the same day as his wedding to Upton? Now you know. The dude owes it all to her! And now she’s pregnant with their first child. So. Sweet.

Justin Verlander of the Houston Astros with then-fiancee Kate Upton after the Astros defeated the Los Angeles Dodgers in game seven to win the 2017 World Series. (Photo by Ezra Shaw/Getty Images)

Meanwhile, for Those Who Do Not Follow Professional Sports, here’s 3 for the week of August 12, 2018:

1. NFL Preseason. Must know: The pro football preseason started last week, with 12 games played. Nice to know:  Jimmy Garoppolo, the great hope of the San Francisco 49’ers, didn’t look so great in his first game. The New England Patriots – in the words of our Executive Sports Editor – played like crap for the first half in their match-up with the Washington Redskins, causing their head coach Bill Belichick to declare: “in 30 minutes of first half football, we played 38 seconds of sound football.” Extra Credit: Quarterback Baker Mayfield looked sharp for the Cleveland Browns, as did running back Saquon Barkley for the New York Giants – he rattled off a 39-yard run in his first touch. Quarterback Deshaun Watson has returned to the Houston Texans after an unfortunate season-ending injury in his rookie season last year. Quarterback Andrew Luck is back playing for the Indianapolis Colts for the first time since 2016, and looked good in his first game. Bonus Style Points: After signing head coach Jon Gruden to a 10-year, $100 million contract, the Oakland Raiders still have an issue with arguably the best defensive player in the league, Khalil Mack, who is still a hold-out. Mack is facing a $814,000 fine for missing Friday’s game, and word is that Gruden has only spoken to him once since becoming head coach. Finally, the rumor is that free agent wide receiver Dez Bryant, who was cut by the Dallas Cowboys, might go to the Cleveland Browns.

2. MLB News. Must know: Since getting swept by the Boston Red Sox at Fenway Park last weekend, the New York Yankees are beating up on lesser opponents, with a 3-game sweep of the Chicago White Sox and a victory over the Texas Rangers. Slugger Giancarlo Stanton seems to be heating up at just the right time. Unfortunately, Aaron Judge’s wrist injury is taking longer to heal than the 3-week time frame first expected. Nice to know: Texas Rangers pitching ace Bartolo “Big Sexy” Colon, age 45, this week achieved his 246th win and becomes the winningest Latin American pitcher of all time. We just have to note that his has to be the most coveted nickname in all of professional sports. Just sayin. Extra Credit: Despite some recent set-backs, the Yanks are still breaking MLB records this season: they’ve had 21 multiple home run games so far this season; only one other team in league history has had that many. The full season record is 24, so the Yankees could definitely break that. This roster has also had the most strike-outs in Yankee franchise history, with 43 strike outs in the the three games from Monday to Wednesday with the White Sox in Chicago. Finally, Yankee Giancarlo Stanton this week hit his 295th home run, in his ninth season in the major leagues. He’s now ahead of both Ted Williams and Ken Griffey, and only 3 behind Hank Aaron for home runs in the 9th season of his career. Says our Sports Desk: That’s a lot of home runs.

3. PGA Championship. Must know: In pro golf,  this weekend is the 100th PGA Championship, being played at Bellerive Country Club in St. Louis. Nice to know: Tiger Woods is still in the hunt as of this posting, which will be great for the TV ratings, if nothing else. He’s in a six-way tie for sixth place right now.  Extra Credit: Going into today’s final round, Brooks Koepka sits atop the leader board, followed by Adam Scott, Rickie Fowler, Jon Rahm and Gary Woodland.

Here are a few other fun facts for those who need all the ammo they can get when the conversation turns to sports:

If you’re eating breakfast, you might want to skip this one. At Wednesday night’s Yankee game, the umpire called time out and jogged into the dugout, whereupon the Yankees trainer took a tweezer and in full sight of the cameras pulled a large (1 inch long) live and moving moth from his ear. YUCK!!!!! Our Sports Desk felt that you should know that is is one of the high points of insects in baseball. There are also midge and gnat stories, but those are definitely for another time.

Johnny Manziel – aka Johnny Football – is now playing for the Alouettes of the Canadian Football League. He’s not starting out so well: he threw 3 interceptions in the first 5 minutes of play in his first game Up North.

Former NFL quarterback Tim Tebow had been doing well playing in the minor leagues for the New York Mets; unfortunately, this week he suffered a hand injury that is likely to keep him out for the rest of the season.

Finally, we end with the news that a 10 year old boy has broken Michael Phelps’ junior record, which had previously stood for 23 years.

Everybody into the pool! That’s it. You’re good to go. See you next week.