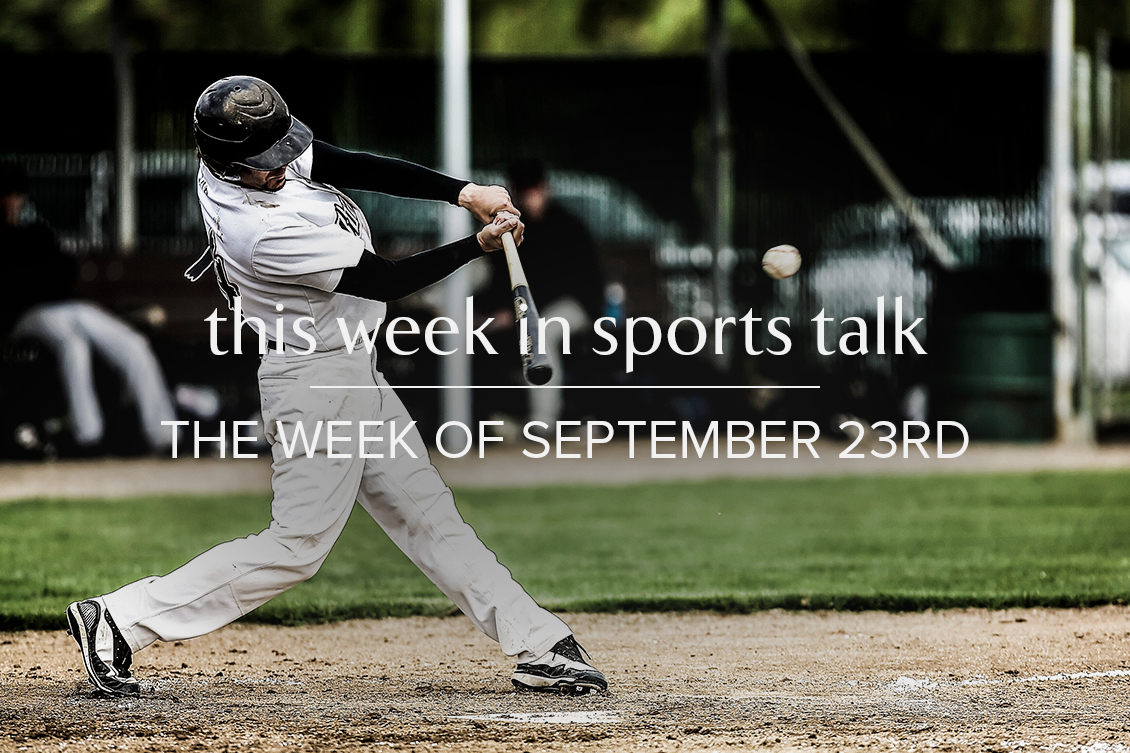 TWIST: This Week in Sports Talk is our weekly recap of what you need to know this week to join the conversation about sports. Why sit on the sidelines when you can get in the game?

We begin this week with news from the world of golf. As of this posting, Tiger Woods is in the lead after the 3rd round of the PGA Tour Championship at the East Lake Golf Club. If he wins, it will be his first victory since 2013. Fans are eager for a Cinderella ending for Woods, who has publicly battled injuries and doubts about his ability to play competitively again for years, and who has made a slow and steady comeback since undergoing spinal fusion surgery 17 months ago.

Also, if you need any further proof that sports and politics are inextricably intertwined, note that this week, North and South Korea announced plans to make a joint bid to host the 2032 Summer Olympics.

For Those Who Do Not Follow Professional Sports, here are the happenings in the wide world of sports that you should know about for the week of September 23, 2018:

1.National Football League (NFL) News. Must know: This is Week 3 of the season. The biggest headline so far this week is that on Thursday night, the Cleveland Browns won their first game in 635 days, defeating the New York Jets thanks to their number one draft pick, rookie quarterback Baker Mayfield. He came off the bench when injured starting QB Tyrod Taylor left the game. The Browns were down 14-0 to the Jets, and Mayfield led his team to a 21-17 win against the number three overall draft pick, Jets rookie QB Sam Darnold. Budweiser had promised free beer for Cleveland fans when their losing streak finally broke (2 cans per person) – so the streets of Cleveland were full of revelers, and ESPN reports that ticket orders started pouring in before the game was even over. Taylor is on concussion protocol right now, and Mayfield may start at the Browns’ next game.

Comparisons between Darnold and Mayfield are inevitable, as both are rookie quarterbacks and early draft picks. Our Sports Desk reports that Mayfield was considered a “free spirit” in college: highly competitive, prone to trash talk, and viewed as somewhat immature. Darnold was much more the “corporate” type, but didn’t display Mayfield’s flashes of brilliance. When Cleveland drafted Mayfield over Darnold, the skeptics thought “here we go again,” with Cleveland blowing a high draft pick on a QB. This victory surely makes people feel better. Still, of their first-round draft picks from 2012-16, not a single player is still with the Browns (that’s called a “draft bust,” and at this feat, at least, Cleveland leads the NFL). To date, it’s been a monumental record of futile attempts at franchise-building. Is that pattern now being broken? Stay tuned.

Nice to know:  There are 2 big marquee NFL games on Sunday. First, the Super Bowl champion Philadelphia Eagles meet the Indianapolis Colts, with QB Carson Wentz returning from his 2018 season-ending injury to lead the Eagles. Second, “the student faces off against the master” when head coach Bill Belichick and the New England Patriots play the Pats’ former defensive coordinator and new head coach of the Detroit Lions, Matt Patricia, at Ford Field in downtown Detroit. This week the Pats signed the talented but troubled wide receiver Josh Gordon from the Browns – there’s a great deal of speculation about whether that will work out or not. Finally, all three Florida-based teams — the Jacksonville Jaguars, the Tampa Bay Buccaneers, and the Miami Dolphins — are undefeated heading into Week 3 for the first time since 1997.

Extra credit: This year’s Pittsburgh Steelers, who are 0-1-1 for the season (no wins, one loss, and one tie), are turning into a hot mess. Wide receiver Antonio Brown, one of the best in the league, had a tantrum after the team’s loss last week to the Kansas City Chiefs. In response, a former front office team executive tweeted that Brown is lucky to have played with QB Ben Roethlisberger. Brown responded, “so trade me and let’s find out.” Then he skipped the team’s next practice and was reprimanded by the head coach. Meanwhile, Le’Veon Bell continues to be a no-show – if he misses this weekend’s game, he will have forfeited $2.56 million so far this season. In far more serious news, in her new book Stephanie Clifford (aka Stormy Daniels) alleges that in 2008, the current President introduced her to Ben Roethlisberger at a party at a hotel in Lake Tahoe (the Steelers had just won the Super Bowl). At the end of the evening, Clifford says the President asked the QB to walk her to her door. Upon arrival at her room, she reports that Roethlisberger asked for a kiss, and when rebuffed became threatening. Reportedly, he skulked around outside her hotel room for several minutes after she escaped inside, even knocking on the door several times before finally retreating. He was later accused of sexual assault by a woman who worked at that same hotel, as well as by a 20-year old college student in a separate incident. Bonus Round: Colin Kaepernick remains unsigned.

2. NCAA college football news. Must know: It’s Week 4. Nice to know: #4 Ohio State head coach Urban Meyer returned to the sidelines after a 3-game suspension for the way he handled domestic abuse allegations against one of his assistant coaches. The team plays Tulane at home. Extra credit: The marquee game this weekend is a Pac-12 primetime match-up: #7 Stanford at #20 Oregon. Stanford’s injured star Bryce Love is expected to return. A second somewhat important game is #22 Texas A&M at #1 Alabama.

3. Major League Baseball (MLB) Latest. Must know: The regular season ends on Sunday, September 30, so the playoffs are getting close. On Thursday, the Boston Red Sox clinched their spot in the American League playoffs by winning the first of a 3-game away series against division rivals the New York Yankees. The Sox have now won the AL East for three years in a row. As of this posting, the Yankees are ahead of the Oakland A’s by only 1.5 games for home field advantage in the wild card game. The Houston Astros are 3.5 games ahead of the Oakland A’s in the AL West, and Cleveland Indians have won the AL Central division for the third consecutive year.

Nice to know: In the National League, as of this posting, the Atlanta Braves lead the NL East by a sizable margin; the Chicago Cubs have a 2-game lead over the Milwaukee Brewers in the NL Central; and in the NL West, the LA Dodgers are 2.5 games ahead of the Colorado Rockies.

Extra Credit: The unfortunate Baltimore Orioles have lost a team record 108 games and counting. And the New York Yankees’ bats keep swinging: when first baseman Luke Voit hit his 10th home run, the team chalked up 12 players with 10 or more home runs in a season, a new major league record. His homer was the 246th for the Yanks this year, a new franchise record. Giancarlo Stanton hit number 247 later in the same game. The team is on pace for 262 homers, which would be only 2 short of the MLB record set by the 1997 Seattle Mariners.

In our friendly NFL pool, Team Dandelion was even-Steven in Week Two — we got it totally wrong on a whole bunch of games (our Pats put in a very poor showing against the Jags). Our shoe money is in danger . . . Here’s hoping we make up some ground this week.