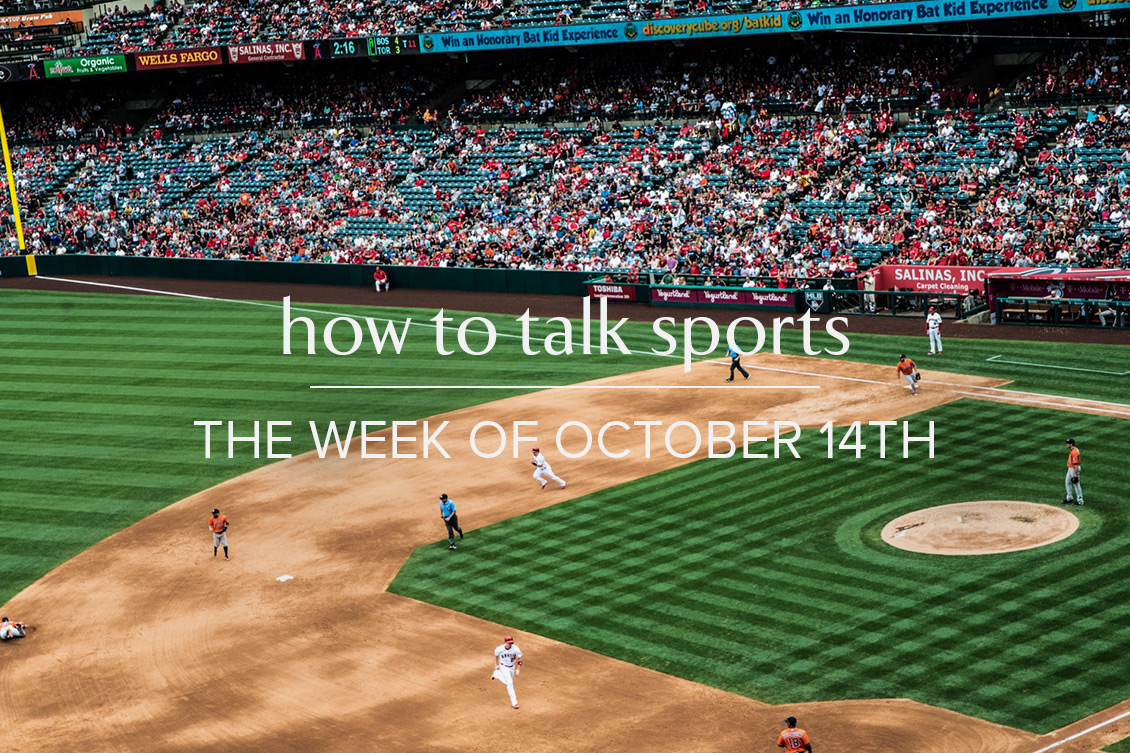 TWIST: This Week in Sports Talk is our weekly recap of what you need to know to talk sports this week without having to fake it. If you’re not a sports fan, here are your talking points for the week of October 14, 2018.

October is a sports fan’s paradise, so take your pick of topics to chat about with the sports fans in your life. The NBA, NHL, NFL and college football seasons are all underway (well, technically it’s the NBA pre-season, but still). Its playoff time in Major League Baseball, with the league championships on the line this week.

We begin this week with good news for football fans and media executives: the TV ratings for the NFL are up for first time since 2015. About a month into the 2018 season, ratings are up around 2% compared to this time last year, attracting an average of 15.6 million viewers across all networks. The declining viewership for football games has been a point of pain and active discussion in the league for the past couple of years, with fingers pointed in all directions. The apocalypse has been averted, at least for now.

For Those Who Do Not Follow Professional Sports, here are the happenings that you should know about for the week of October 14, 2018:

1. Post-season play in Major League Baseball. Must know: The league championship games are now underway. The two winning teams will meet in the World Series. Nice to know: Four teams are now playing best-of-7 series (they’re evenly matched, and the Sports Desk predicts that both of these will go to 6 or 7 games): in the National League it’s the Milwaukee Brewers versus the LA Dodgers. The Brewers are on a 12-game winning streak – on Friday they defeated the Dodgers 6-5 in Game 1 of the NL Championship series, and local restaurant George Webb is making good on a decades-old promise to give away free burgers if the team made it to 12 wins in a row. (“Who knew that we would make it this far and the biggest piece of stress going into this game would be George Webb’s hamburgers?” Brewers manager Craig Counsell asked before Game 1). In the American League, it’s the Boston Red Sox versus the Houston Astros.

The Milwaukee Brewers defeat the LA Dodgers in Game 1 of the NL Championship Series. Photo Courtesy of the New York Times

Extra Credit: New York Yankees fans are in high dudgeon about their ignominious defeat at the hands of their arch-rivals, the Red Sox, in the division championship. Manager Aaron Boone, slugger Giancarlo Stanton, and pitcher J.A. Happ are all facing criticism about their post-season performance (especially Stanton, who has a huge contract and who was invisible in the post season). It all started when the Yanks beat the Sox at home at Fenway Park, and slugger Aaron Judge walked through the stadium (and near the entrance to the Sox locker room) with a boom box blaring “New York, New York.” This diss apparently motivated the Sox, because at the next game – this time at Yankee Stadium – they beat the Yanks 16 – 1, and then squeaked out a narrow victory in Game 4 to take the series. Despite shattering records all season, none of the Yankee sluggers hit very well –while the team hit 267 homers during the regular season, they hit no home runs in games 3 or 4. For a team that won 103 games this season, it’s a bitter end to what had been a sweet season.

2. High stakes in the National Football League (NFL). Must know: It’s Week 6, and the Kansas City Chiefs are still undefeated. They’ll face the New England Patriots in Foxborough today in a highly-anticipated match-up between the youngest QB in the NFL (Patrick Mahomes) and the oldest QB in the NFL (Tom Brady). The Pats have had 10 days to prepare, and it’s potentially a high-scoring game, as both teams lack a strong defense. Nice to Know: This weekend, in addition to the Pats-Chiefs, there are two other big games that fans may be talking about later in the week: the LA Rams head to a cold (and possibly snowy) Denver to meet the Broncos and their strong Von Miller-led defense; and the Pittsburgh Steelers meet the Cincinnati Bengals in a rivalry game; our Sports Desk reports that the Steelers look to be in a bit of an organizational mess versus the better-than-advertised Bengals. Can the Steelers right the ship, or are the Bengals the real deal?

Extra credit: In New York, Giants fans are distraught over their team’s 1-5 record after an embarrassing loss to the Philadelphia Eagles on Thursday night. Giants’ star receiver Odell Beckham Jr (OBJ) made disparaging remarks in an ESPN interview days before the game, and in its aftermath, fans are questioning whether QB Eli Manning is done, and why the team didn’t take a QB in this year’s draft. (For those just tuning in, the Giants drafted the best overall talent in the draft, running back Saquon Barkley, instead – their crosstown rivals the New York Jets drafted a young star QB, Sam Darnold). Meanwhile, the Eagles are building momentum as they get players back from injuries. Bonus Round: On Monday night, New Orleans Saints QB Drew Brees surpassed Peyton Manning to become the NFL’s all-time passing yards leader.

Some of our readers have asked why we don’t give more attention to the great game of hockey, so here goes: the NHL season started last week, and the Toronto Maple Leafs are the stars of the season so far, leading the NHL standings with eight points (4-1-0), averaging five goals per game, with the top four scorers in the NHL. Meanwhile, the New York Rangers are already 1 – 3. Ugh.

Team Dandelion has two friendly sports wagers underway at the moment: after our Sox won in the ALDS, we’re staying with them as they face the Houston Astros. We continue to embarrass ourselves this year in our friendly NFL pool, after a good early start. At least the Eagles won on Thursday night.

That’s it. You’re good to go. See you next week. And for a weekly dose of career insights and ideas, sign up for our newsletter, Power Up, here.