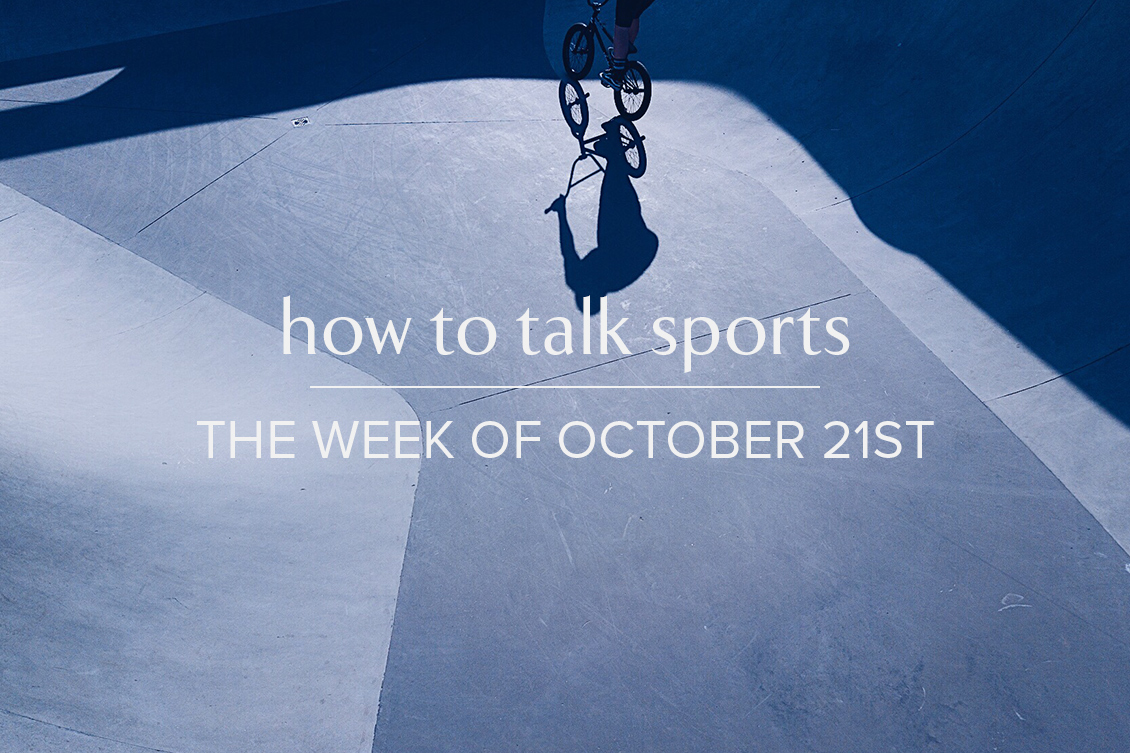 TWIST: This Week in Sports Talk is our weekly recap of what you need to know to talk sports this week without having to fake it. If you’re not a sports fan, here are your talking points for the week of October 21, 2018.

The NBA, NHL, NFL and college football seasons are all underway. But this week it’s all about the grand finale of the Major League Baseball season.

For Those Who Do Not Follow Professional Sports, here are the happenings that you should know about for the week of October 21, 2018:

1. World Series time in Major League Baseball. Must know: The Boston Red Sox will meet the LA Dodgers in this year’s World Series. The coast-versus-coast match-up augurs well for high TV ratings. Game 1 is on Tuesday at Fenway Park in Boston. Nice to know: In the American League, the Boston Red Sox won the championship series 4-1 over the defending world champion Houston Astros. It’s the 14th time the Sox have won the AL pennant, and they took the final three games in this series despite being on the road. In the National League, as our Sports Desk predicted, the series went all the way to Game 7. This is the 20th time the Dodgers will play in the World Series. Extra Credit: Red Sox pitcher Dave Price delivered the first scoreless post-season start of his career, after having never won a post-season game as the starting pitcher until now. It was arguably the best game of his 11-year career in the majors.

2. High stakes in the National Football League (NFL). Must know: It’s Week 7, and the LA Rams are still undefeated. The Kansas City Chiefs lost their first game of the season to the New England Patriots last weekend. Every other team has 4 wins or less season-to-date. Nice to know: This weekend, the New York Jets meet the Minnesota Vikings; fans will be watching to see the former Jets QB Kirk Cousins face rookie Jets QB Sam Darnold.

Extra Credit: New Orleans Saints quarterback Drew Brees can again enter elite status this weekend if he throws touchdown #500. And if the Saints beat the Baltimore Ravens this weekend, Brees will have played and beaten all 32 teams in the NFL. Wow.

Bonus Round: John Mara, owner of the New York Giants, said at the NFL owners meeting this week that he wishes OBJ (who was signed to a $95 million contract just weeks ago) would do less talking and more playing on the field. Harsh. The pressure is high, as the Giants meet Atlanta on Monday night to try to salvage their season.

3. Important match-ups in NCAA college football. Must know: It’s Week 8. Nice to know: The game of the week was #24 Michigan State at #6 Michigan. The historic rivalry had extra vigor as fans watched to see if Michigan head coach Jim Harbaugh could deliver on the promise of his return to the team. Michigan won handily, 21-7. Extra credit: The other notable games this weekend were #16 NC State at #3 Clemson (Clemson won 41-7); #22 Mississippi State at #5 LSU (LSU won 19-3); and #12 Oregon at #25 Washington State (Washington State won 34-20 in an upset).

Some of our readers have asked why we don’t show more love to the great game of hockey, so here goes: the game of the week in the NHL saw the Pittsburgh Penguins defeat the red-hot Toronto Maple Leafs in a big early-season upset.

Finally, in the NBA, the season opened this week with the Golden State Warriors receiving their 2018 Championship rings. They’re epic when it comes to bling: designed by Jason Arasheben (aka Jason of Beverly Hills), they’re the first reversible championship rings (as an homage to their back-to-back victories). The rings feature 56 stones on the team side and 74 sapphires and diamonds on top. In other NBA news, LeBron James lost to the Portland Trailblazers in his first game as an LA Laker.

Team Dandelion is celebrating the victory of the Sox in the AL and hoping for a win in the World Series. Meanwhile, in our friendly football pool, we did OK this week. Good thing the Broncos won Thursday night. We’ve got our eyes on some suede boots upon which we intend to blow any winnings this weekend. Mama needs a new pair of shoes.

That’s it. You’re good to go. See you next week.  And if you find yourself in the mood for a weekly dose of career insights and ideas, sign up for our newsletter, Power Up, here.