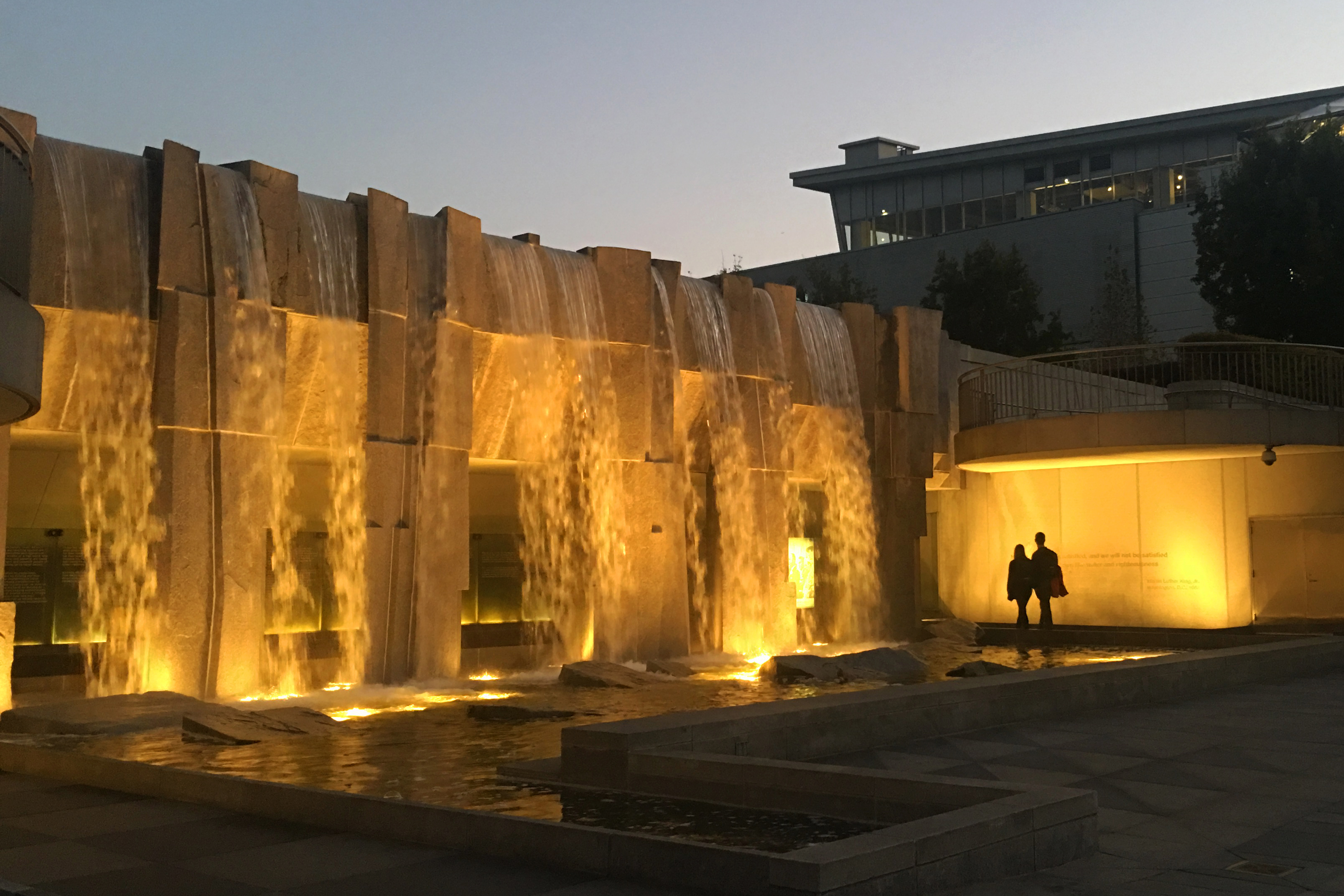 In a lovely spot in San Francisco, the Martin Luther King, Jr. Memorial reminds us all of the very best of humanity.

The achievements of African-Americans are celebrated in many forms and in many places around the world: in paintings, sculpture, film and literature, among others. One of the most magnificent ones that we’ve ever seen is a magical spot in San Francisco.

Yerba Buena Gardens is the name for two blocks of public parks located downtown, just steps away from the San Francisco Museum of Modern Art and the Yerba Buena Center for the Arts. The Martin Luther King, Jr. Memorial is located there, behind a waterfall. It’s said to be the largest fountain on the West Coast.

On a recent business trip to San Francisco, we stayed at the tony Four Seasons on Market Street. At dusk, we could see from our window on a high floor of the hotel what appeared to be an enormous illuminated waterfall. We had no idea what it was, but we were keen to find out. It felt as if it was beckoning to us. So we set out to investigate.

And this is what we found.

It was golden hour as we approached, and that felt exactly right once we realized what we were seeing: the United States’ second largest Martin Luther King Memorial, titled Revelation. It was designed by Houston Conwill and built in San Francisco in 1993, behind a granite wall overflowing with cascading water, tucked under an expansive reflecting pool.

The late African-American artist Houston Conwill invested all of his sculptures and memorials with a deep spirituality. That’s evident in his design for this monument. The centerpiece is a 50-feet wide waterfall that invites visitors to step behind it and into a cool, serene refuge from the cacophony of the surrounding city.

Conwill was a former seminarian and a Vietnam War veteran who built site-specific installations honoring black culture; in addition to this magnificent waterfall, he crafted a memorial to poet Langston Hughes in Harlem.

On each side of the waterfall are clearly visible statements etched in Sierra granite. One is a Bible passage from the prophet Amos that Dr. King often quoted: “But let justice roll down like waters And righteousness like an ever-flowing stream.”

Those words stay with you as you explore this incredible structure. As the rushing water roars and sprays, step behind the waterfall, and you’ll find photos of Dr. King and quotes from his speeches etched into 12 glass panels, translated into the language of San Francisco’s 13 sister cities, as well as Arabic and African dialects.

The city is never far away, but when viewed from behind the waterfall, it takes on a dreamy quality. The only sound is the roaring water, in its endless unceasing rush. The stones below you are damp, and there’s a soft mist in the air.

With this memorial, the sculptor’s intention was to create “a sacred space, a pilgrimage, a journey.” As you stand quietly behind the waterfall, reading Dr. King’s words, or just reflecting on them, you begin to see how this work evokes images of baptism by immersion; the washing away of sins; and the inexorable and mighty wave of justice that will engulf us all.

The space has the feeling of a sanctuary, and if you experience it as we did – when it’s not too crowded, in the glow of the evening – you might start to feel that you’re being swept up in something powerful – that you are part of this rolling wave. Not just observing it, but participating in it. Being changed by it. Being challenged by it.

It’s rare to find such a transformative experience on a spontaneous stroll in the middle of a great city. On a business trip, no less! We feel that we should have known about this memorial long before we did – that it should have been a deliberate destination for us, rather than pure serendipity. But perhaps that’s part of the power of this memorial — it’s hidden in plain site, waiting for you. When the student is ready, the teacher arrives.