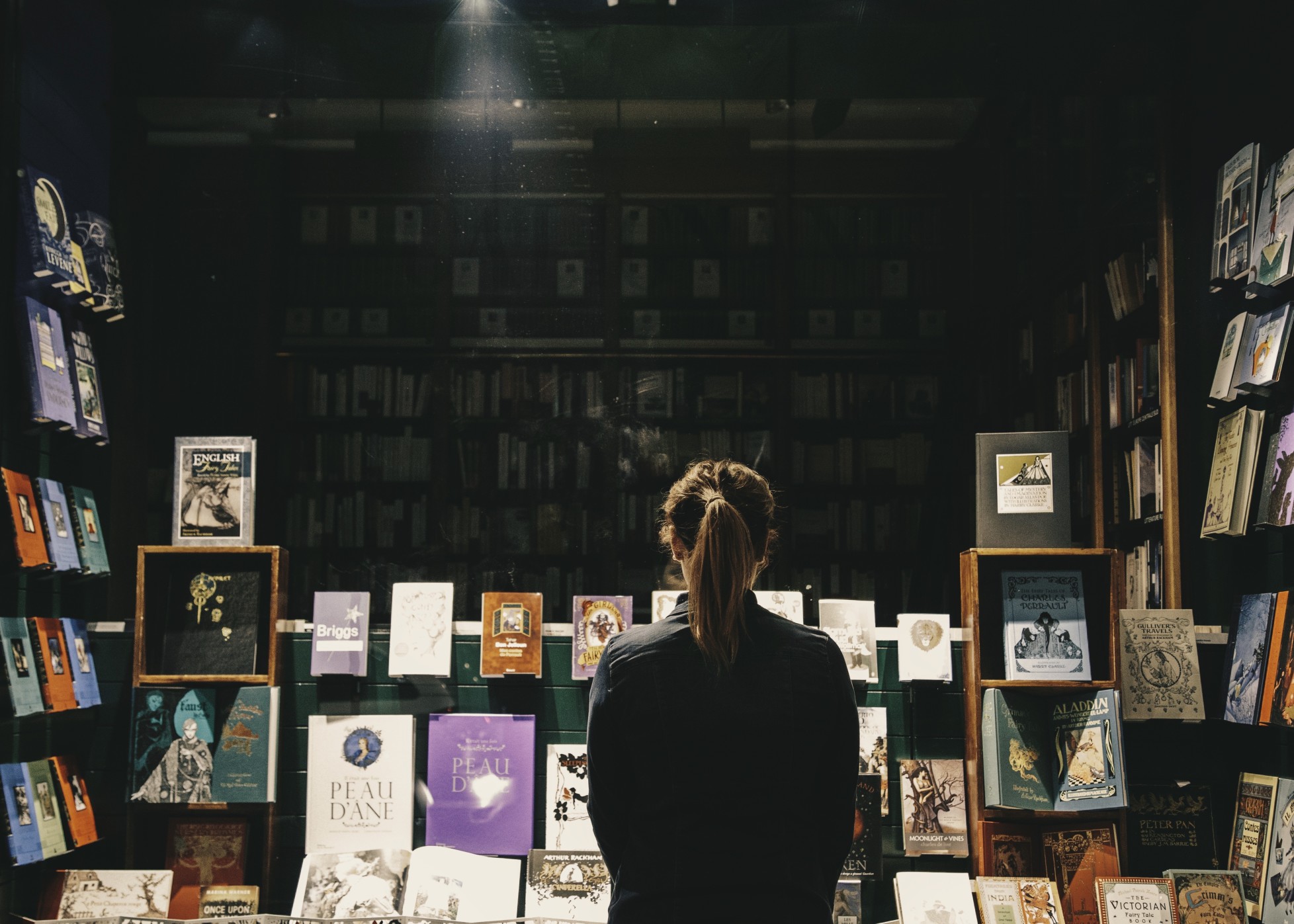 New month, new books! Book Light is our Dandelion Chandelier curated list of the titles we’re most excited about that are being published in the upcoming month. Our intrepid team has been exploring the most-anticipated new books scheduled to be released in November 2018 and here’s what we found.

Despite the approach of the glittering holiday season, many of the new books of November are reasonably dark. On deck are dystopian fiction, plus novels about unfortunate occurrences at a luxury spa, a scheming writer with lethal ambitions, a female serial killer (and her sister), and a new cookbook to help us prepare for the apocalypse.

On a brighter note, though, there are comic novels about family, gorgeous poems, tales of unlikely friendships, Michelle Obama’s long-awaited memoir, and a book about the regenerative power of dreams.

Here’s our pick of the top new books – novels, poetry, short stories, essay collections, and non-fiction – that we cannot wait to read. You can pre-order them now if you like.

Family Trust by Kathy Wang. Stanley Huang is the dying patriarch of the Huang family. His son feels that he should be making a lot more money; his daughter is juggling work and family; there’s also an ex-wife and a new wife in the mix. Stanley has always claimed that he’s worth a small fortune. Now his family is starting to fear that it may be more “small” than “fortune.” Think of it as “a brilliant mashup of The Nest and Crazy Rich Asians.” – October 30, 2018

The Feral Detective by Jonathan Lethem. In the author’s first detective novel since Motherless Brooklyn, an unlikely pair navigate the enclaves of desert-dwelling vagabonds on the outskirts of LA in search of a young woman who has mysteriously vanished – November 6, 2018

Monument by Natasha Trethewey. The poet’s first retrospective layers joy and urgent defiance, giving voice to unsung icons. The collection includes verse that delineates the stories of working class African American women; one of the first black Civil War regiments; mestizo and mulatto figures in Casta paintings; and Gulf coast victims of Katrina. This volume has been longlisted for the 2018 National Book Award for Poetry – November 6, 2018

Nine Perfect Strangers by Liane Moriarty. From the New York Times bestselling author of Big Little Lies comes a new novel that addresses this pressing question: Could ten days at a health resort really change you forever? Nine people gather at a remote health resort, the luxurious Tranquillum House. The strange and charismatic owner/director of the facility might have the solutions they’re seeking. Should they put aside their doubts and immerse themselves in everything the spa has to offer – or should they run while they still can? – November 6, 2018

Those Who Knew by Idra Novey. From the award-winning author of Ways to Disappear (a smart novel we absolutely love) comes a new tale about what a powerful politician thinks he can get away with, and the group of misfits who finally bring him down. On an unnamed island country ten years after the collapse of a U.S.-supported regime, Lena suspects the powerful senator she was involved with back in her student activist days is taking advantage of a young woman who’s been introducing him at rallies. When the young woman ends up dead, Lena revisits her own fraught history with the senator and the violent incident that ended their relationship. What follows is an exploration of the cost of staying silent and the mixed rewards of speaking up in a profoundly divided country. – November 6, 2018

Paris Echo by Sebastian Faulks. When American historian Hannah, immersed in research about World War II research in Paris, takes in as a boarder Tariq, a Moroccan teenager, an unexpected connection occurs. As the young man tries to assimilate and research turns up disquieting history, both must confront the question of what the past century can teach about the future   – November 6, 2018

The William H. Gass Reader by William H. Gass features more than fifty selections chosen by the late author himself from his essays, criticism, commentary, short stories, and novels.  – November 6, 2018

Evening in Paradise: More Stories by Lucia Berlin is a second collection of previously written stories from the short-story master and literary sensation. A Manual for Cleaning Women, a posthumous story collection by a then-relatively unknown writer, emerged to wild, widespread acclaim in 2015. This follow-up is a selection from Berlin’s remaining stories: twenty-two gems that showcase the gritty glamour that made readers fall in love with her. – November 6, 2018

The End of the End of the Earth: Essays by Jonathan Franzen. The award-winning author of Freedom and The Corrections returns with a collection of essays and speeches written mostly in the past five years. The author brings renewed vigor to the themes that have long preoccupied him. Whether exploring his complex relationship with his uncle, recounting his young adulthood in New York, or offering an illuminating look at the global seabird crisis, the collection is filled with “wit and disabused realism.” – November 13, 2018

Becoming by Michelle Obama. In her memoir, former First Lady Michelle Obama invites readers into her world, chronicling the experiences that have shaped her—from her childhood on the South Side of Chicago to her years as an executive balancing the demands of motherhood and work, to her time spent at the world’s most famous address. – November 13, 2018

Fed Up by Gemma Hartley. An expansion of the author’s popular Harper’s Bazaar article, “Women Aren’t Nags—We’re Just Fed Up,” this book is about the emotional labor that falls on women to perform on a daily basis at both work and home. Hartley argues that the assumption that women will gladly perform this thankless work fosters and exacerbates gender inequality — and she offers practical advice on what we can do to change that. – November 13, 2018

Heirs of the Founders: The Epic Rivalry of Henry Clay, John Calhoun and Daniel Webster, the Second Generation of American Giants by H. W. Brands. The New York Times bestselling historian returns with the story of how America’s second generation of political giants–Henry Clay, Daniel Webster, and John Calhoun– took the country to war, battled one another for the presidency, and tasked themselves with finishing the work the Founders had left undone. – November 13, 2018

Fox 8: A Story by George Saunders, illustrated by Chelsea Cardinal. The New York Times bestselling author of Lincoln in the Bardo shares a darkly comic short story about the unintended consequences unleashed by our quest to tame the natural world. – November 13, 2018

A Ladder to the Sky by John Boyne is a psychodrama following one cunning, ruthless man who will stop at nothing in his pursuit of success. Aspiring and ambitious writer Maurice engineers a chance encounter with celebrated novelist Erich Ackermann. He quickly ingratiates himself with the powerful – but desperately lonely – older man, teasing out of Erich a terrible, long-held secret about his activities during the war that provides the grist for the perfect first novel. – November 13, 2018

Why We Dream: The Transformative Power of Our Nightly Journey by Alice Robb. For anyone who’s ever kept a dream journal or fixated on the idea of lucid dreaming, a thorough exploration of the mysterious nightly phenomenon from a scientific point of view. – November 20, 2018

My Sister, the Serial Killer by Oyinkan Braithwaite is a satirical novel about a Nigerian woman whose younger sister has a very inconvenient habit of killing her boyfriends. This highly-anticipated debut novel has already been optioned for a film in the UK – November 20, 2018

Hazards of Time Travel by Joyce Carol Oates. In this dystopian novel, an idealistic girl dares to test the perimeters of her tightly controlled (future) world and is punished by being sent back in time to a region of North America — “Wainscotia, Wisconsin”—that existed eighty years earlier.  Set upon a course of “rehabilitation,” she falls in love with a fellow exile and begins questioning the constraints of the Wainscotia world – with results that are both devastating and liberating. – November 27, 2018

Joe Beef: Surviving the Apocalypse: Another Cookbook of Sorts by Frederic Morin, David McMillan, and Meredith Erickson is the second cookbook from Joe Beef, one of Montreal’s best restaurants. – November 27, 2018

How Long ’til Black Future Month?: Stories by N. K. Jemisin  The speculative fiction writer debuts her first collection of short fiction, a series of narratives of destruction, rebirth, and redemption. Dragons and hateful spirits haunt the flooded streets of New Orleans in the aftermath of Hurricane Katrina. In a parallel universe, a utopian society watches our world, trying to learn from our mistakes. And in the Hugo award-nominated short story “The City Born Great,” a young street kid fights to give birth to an old metropolis’s soul. – November 27, 2018

Come with Me by Helen Schulman. Amy, the middle-aged protagonist who has signed on to work for a tech startup that’s poised to bring “multiverse theory”—an idea that taps into the idea of multiple versions of a life playing—to the mainstream (think Sliding Doors meets Silicon Valley). Amy is the firm’s guinea pig, and at first she’s intrigued: Who would she be if she had made different choices, loved different people? Where would she be now? – November 27, 2018

Whatever you decide to dive into this month, we hope it’s a great read.