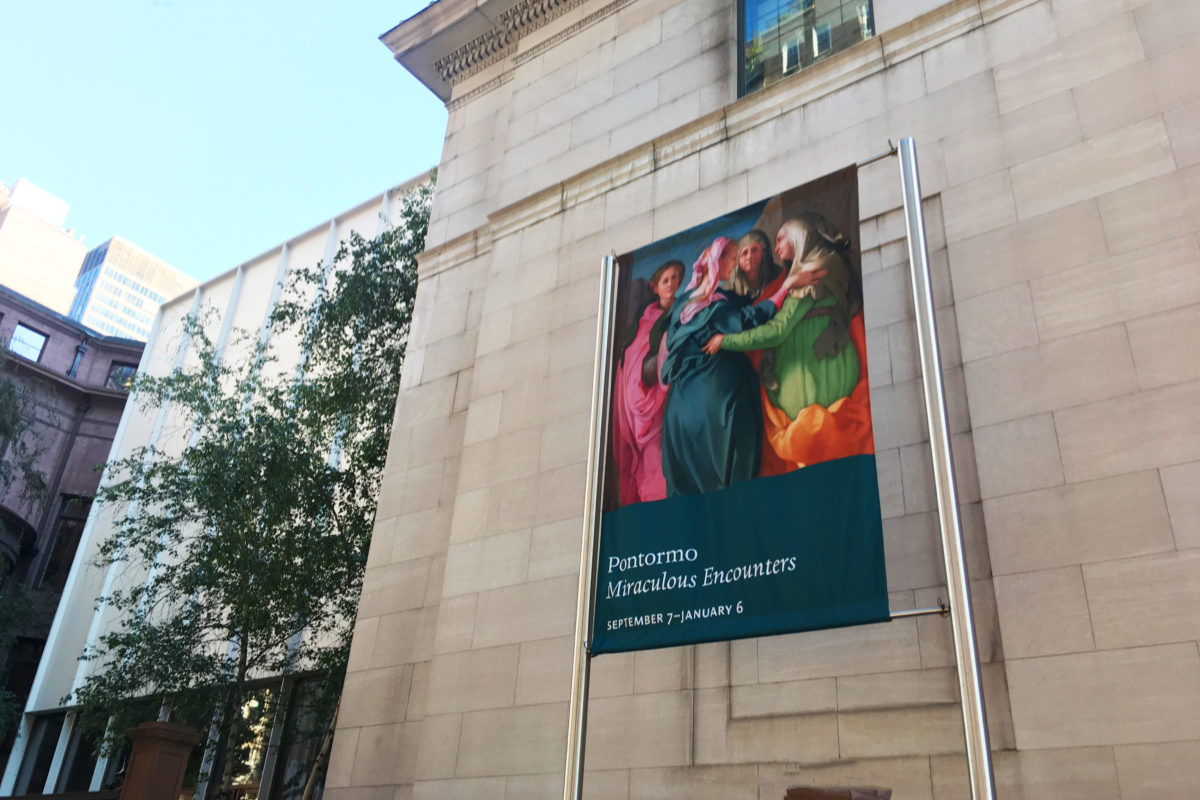 In a city filled with wondrous works of art from every conceivable time period and genre, and from hundreds of nations and cultures, which one is the most beautiful of all? This fall in New York City, the art critics and experts have reached an uncommonly uniform consensus. The most beautiful painting in New York City – at least for another few weeks – is Visitation, an oil painting by the Italian Mannerist Jacopo da Pontormo (1494–1556). You can see it for yourself from now until January 6, 2019 at the Morgan Library & Museum.

a sensational exhibit on a very small scale

Pontormo: Miraculous Encounters at the Morgan Library in New York has been a buzzy sensation in New York this fall, despite the fact that it consists of only two completed works.

The exhibit is housed in an intimate enclosed gallery on the ground floor of the Morgan. It’s a space not much bigger than the office of a mid-level manager at a large corporation. Given the usual blockbuster New York art museum exhibits, with their expansive dramatic galleries and jostling crowds, you’d be justifiably puzzled at what all the fuss is about as you approach this workmanlike space.

Then you’ll see the painting, and you’ll understand.

why is this work so important?

At the end of the 1520s, at the time of the siege that brought to an end the last Florentine Republic (1529–1530), the painter Jacopo da Pontormo, (1494–1557) created one of his most moving and groundbreaking paintings, the altarpiece of the Visitation of the Virgin and St. Elizabeth.

The conditions under which the work was created are part of the reason for its celebrated standing today.

a city under siege

Facing overwhelming odds, young Florentine soldiers paraded through the city, vowing their readiness to die for their cause. Artists, too, prepared to join the fight. Michelangelo was working in Florence at the time, sculpting the tombs of the Medici family. He put down his chisel and joined the fight to save the republic.

His most ingenious idea was to turn San Miniato, a hill that overlooks Florence, into a gun fort with a lethal commanding view over the countryside. Stymied by this unexpected barrier, the imperial army settled in for a siege. Meanwhile, the militant youth of Florence stood on the battlements – while the food supply dwindled in the city behind them.

While all of this transpired, Pontormo was creating paintings that would later stand as among the best existing examples of Mannerism.

The works are rarely seen, as they’re extremely fragile. Visitation was the subject of a multi-year restoration project. Now that the work is complete, the Italian government has permitted the painting to travel for the first time from Carmignano (near Florence) to the United States.

Four women stand in a tight cluster. One is Mary, mother of Jesus. She’s visibly pregnant, and filled with light and joy. The other is Elizabeth, the mother of John the Baptist. She, too, is clearly expecting a child. And she’s equally radiant.

Elizabeth is much older than Mary, and her pregnancy is nearly as miraculous as that of her friend: she has been infertile her entire life, and at a late stage she becomes pregnant with her first child.

is it really so special?

Yes, dear reader. It really is.

For starters, the colors are extraordinary.

The pink of one of the figure’s robe might be expected. But the teal of Mary’s robe is like a color plucked from the depths of the ocean. The orange of Elizabeth’s robe plays off of the green of the dress underneath it in a way that’s just dazzling. There’s a strain of gorgeous olive green interwoven in the hair and upper bodies of three of the figures. And just the merest hint of lavender in the belt around Elizabeth’s waist.

The fact that these colors have been restored to their true and vibrant origin after centuries is in itself a kind of miracle. But it’s not just a pretty array of colors that makes this work so mesmerizing.

Pontormo was a master at conveying human emotion.

The expressions on the faces of the women are filled with a complex array of feelings: joy, excitement, gratitude, friendship, empathy, reassurance and love. You can almost feel the sisterly warmth and happiness between them. Their bond is like a tangible presence in the room.

Part of the lure of this work is that it rewards close and careful study.

For example, upon further inspection, it’s not clear if there are two women or four. Some art critics say that the painter was mirroring Mary and Elizabeth in the two figures that stand beside and slightly behind them.

The way the figures are arrayed creates a circular energy.

The swirling circular feeling of this painting reminds us of the labyrinths we’ve walked and seen. Circular energy of all kinds is very powerful, and we’ve encountered this motif in several surprising and varied settings recently.

There’s also a sly sense of humor at work in this piece.

Tucked away at the very lowest left margin of the painting, a handful of male figures can be seen in the dim light doing something mischievous. Which also lends an air of lightness and modernity to this majestic ancient work. Even at a moment of grave importance for these women, the courtiers are off living their own lives, and getting into adventures of their own.

what about the other portrait in the exhibit?

The exhibit at the Morgan presents Pontormo’s spectacular altarpiece with another masterpiece by the artist, the Portrait of a Young Man in a Red Cap (1530).

Pontormo painted this portrait of the handsome yet enigmatic young man during the same dramatic months of the siege of Florence. Believed to be lost, it has only been recently rediscovered in a private collection in Europe.

Portrait of a Man in Red Cap

It’s been described as “a painting full of romance and political anger.” The subject of this portrait is unknown. It’s believed to be Carlo Neroni, a young aristocrat – shown here as a defiant volunteer in the armed forces of the republic.  In the painting, he holds a love letter and has a ring on his finger. The implication is that he’s planning to marry, despite the siege.

That has led many to conclude that Pontormo intended the portrait to serve as a hopeful expression of belief at a moment of impending catastrophe.

The painting comes with some political controversy: the National Gallery in London attempted to purchase the work, but lost out to hedge fund billionaire Tom Hill, who paid £30 million for it in 2015. When the British government offered to match that price, he refused.

the impact of visiting the Visitation

No photographs are allowed in this exhibit, which makes a visit feel like a throw-back to pre-Instagram times. With no pressure to document the experience, you can just live it.

Having visited, we now understand why the Morgan decided to cloister this exhibit in such a small space. The central masterwork was created as an altarpiece. And the Morgan displays it reverently, in a serene space. Not unlike a chapel.

We also now understand the urgency underlying the ostensible placidity of both of these paintings. The story of the environment in which these works were created caused us to reflect on the nature of being an artist in a time of crisis.

What would you do as an artist if your city or nation was under siege? Would your work be luminous and filled with hope? What legacy would you attempt to leave? Would you have the courage to see it through?

We’re in awe of the discipline and the deeply-rooted faith that seems to have driven Pontormo. These works are stunningly beautiful – and so is the thought of what this one man’s spirit must have been like.

We left the Morgan and re-emerged into the sharp brightness of a Manhattan afternoon feeling at peace, and full of unexpected happiness after seeing these paintings. The experience reminded us that even in the midst of a noisy, glittering, and sometimes cruel city, there are still available moments of quiet. And reflection. And grace.

What could be more beautiful than that?

Come and join our community! For access to insider ideas and information on the world of luxury, sign up for our Dandelion Chandelier Newsletter here. And see luxury in a new light.