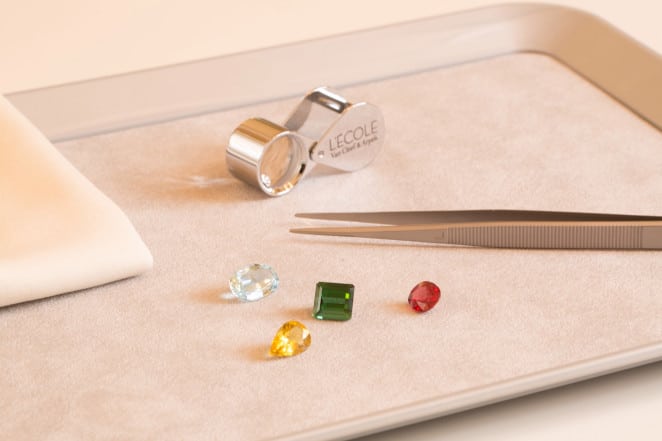 Have you ever dreamed of getting schooled about diamonds? Van Cleef & Arpels recently conducted a New York pop-up of its Paris-based school of instruction in haute joaillerie. Our head of research, Jillian Tangen, spent a brilliant day at the School of Jewelry by Van Cleef’s. Here’s her report.

heading back to school

Like you dear reader, I have accomplished a few things my life – college, masters degree, a way of balancing work and kids. Recently, I even learned how to make my Google Home turn off my lights.

Okay, that last one isn’t too impressive. But here’s one that is, at least to me. I had the opportunity to complete coursework at the L’Ecole School of Jewelry Arts by Van Cleef & Arpels at their New York pop up at 2 East 63rd Street earlier this fall.

With degrees in history and business and a career in research, this is not something I ever thought I would have the opportunity to do (or even the ambition to try). I’m not a jewelry maker, nor am I an aspiring one. So why would I attend a class at a luxury jewelry school?

And now, thanks to L’Ecole’s belief that everyone from novice to expert should have an opportunity to enjoy and learn about the beauty of jewelry arts, I can now add L’Ecole “The Diamond’s Magic Symbols & Legends” graduate to my list of accomplishments.

Here’s what it was like to have a day at the School of Jewelry by Van Cleef’s.

the l’ecole school of jewelry arts

The L’Ecole School of Jewelry Arts is based in Paris. But in recent years, the jeweler has started a nomadic approach to its courses. There have been pop-up schools in places like Tokyo, Hong Kong, Dubai and most recently in New York, where I took my course.

The classes at both the jewelry school’s main and satellite locations are open to anyone seeking an initiation into the world of fine jewelry and watchmaking. It could be for professional reasons. Or just for fun.

The school has three overarching themes with varying levels of instruction by professionals.

First, “Savoir-Faire” lets you wear a jeweler’s coat and try your hand at manipulating materials and tools.  That means you can actually set jewels or learn how to paint lacquer on pieces.

Second, for history buffs like myself, there is a series based on the “Art History of Jewelry.” It covers everything from gold during the renaissance times to amulets to the birth of jewelry itself.

Finally, if you’re curious about gemology and the characteristics of various stones, there are classes about that too. All of these classes are open to anyone who would like to broaden and deepen their knowledge about these hidden worlds.

Even though I knew that the classes at L’Ecole were open to all, I couldn’t help but be a little nervous as I headed into the brownstone where the school’s pop-up would take place, given my limited technical knowledge on diamonds.

Upon entry though, my fears melted away. I was greeted promptly and courteously and led up the winding staircase to my classroom. In total there were 12 of us students, ready to explore the history of one of the world’s most sought-after items.

Under the tutelage of a Van Cleef & Arpels Gemologist and an Art Historian, we learned lots of fascinating things about the myths surrounding diamonds.

For example, we learned, the story of how Alexander the Great was able to overcome the terrible creatures and terrain within the Valley of the Diamonds. Legend is that he alone was able obtain the elusive stones, forever turning them into a symbol of strength and power.

We then moved on to other myths and stories from history, including how diamonds have used as both medicine and poison at times.

Some of the most famous diamonds to make their mark on history include the famous Shah Diamond; and the Tavernier’s Diamonds of the Sun King. Two of the largest diamonds ever found are the Cullinan Diamond and the Cullinan II Diamond, both owned by the British Royal Family.

While we were unable to actually see any of these legendary gemstones in person, we were able to get up-close and hands-on with their replicas.

Following the two hour class we were invited to explore the exhibitions on display. I was given a private tour of the exhibit of masterworks created by the acclaimed American jewelry artist Daniel Brush.

In the next room, I gazed longingly at a sparkling collection of 40 pieces from a private collector that included items from nearly every major jewelry house. They ranged from the 19th century through the 1960’s.

Toward the end, I came to an exhibit on the Tavernier’s Diamonds. This display featured replicas of 20 diamonds previously owned by Louis XIV. Most were lost, but all of them have now been recreated in partnership with the Muséum National d’Histoire Naturelle. It was the perfect way to bring my L’Ecole experience full circle back to the rich history of diamonds.

Having taking my class at L’Ecole, I now have a wealth of fun facts to share with friends and family. Tidbits like how red diamonds are the most rare or that it wasn’t until the 15th century when King Charles VII of France gifted his chief mistress Agnès Sorel with diamonds that they became popular for women to wear in Europe.

More importantly, I left feeling accomplished for trying something completely unknown to me.  But best of all, I left feeling a great sense of connection to the past and with a new understanding. There’s a lot more to the world of jewelry isn’t than mere ornamentation.

As I strolled down Fifth Avenue wandering in and out of Cartier, Bulgari and Van Cleef & Arpels itself on my way home, I reflected with a new eye. Jewelry embodies a society’s vast cultural roots. It is an exquisite art form that can be studied and cherished by anyone who has the desire to learn.

how you can take a class with Van Cleef’s

The New York pop-up has concluded. But there’s a similar course on constant rotation at the Van Cleefs Paris location.

As with the New York pop-up, these will offer a similar curriculum, and glittering exhibits to top them off.

In the meantime I will be here, dreaming of their return to New York City.

Jillian Tangen is the Head of Research at Dandelion Chandelier and a former Senior Research Analyst at McKinsey & Co and Analyst at Shearman & Sterling. She is an avid fan of Nordic design, having owned an independent lifestyle store and sales agency focused on emerging Scandinavian design. Jillian lives in NYC and is married with three young children and loves cross country skiing, the New York Rangers, reading, travel and discovering new brands.