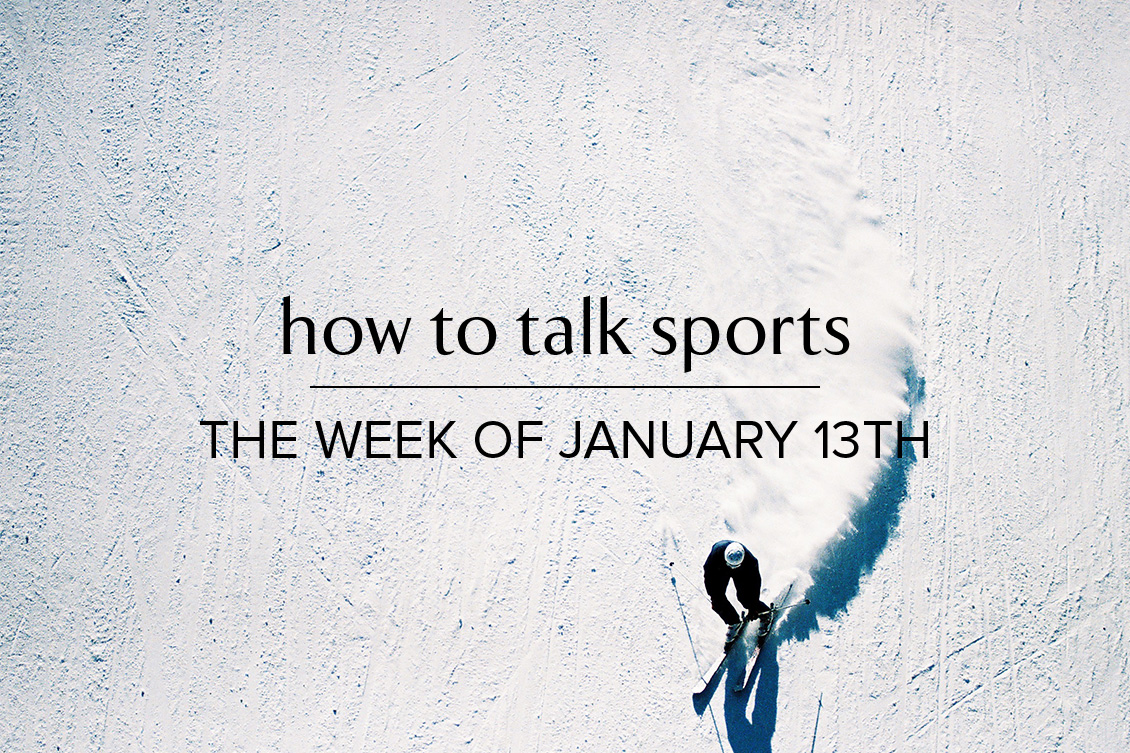 TWIST: This Week in Sports Talk is our weekly recap of how to talk about sports this week like a pro. If you’re just starting to learn about sports, or need a quick summary of what’s up in your favorite league, or just want to know why your spouse keeps obsessively checking the sports scores during important social occasions, here’s what you need to know to talk with a sports fan the week of January 13, 2019.

we begin this week with a reminder

It’s time to start planning your Super Bowl party! The big game is on Sunday, February 3.

Party news aside, our lead headline is the major upset in this week’s College Football National Championship game. Clemson not only won, the Tigers did a beat-down on Nick Saban’s fearsome Crimson Tide with a 44-16 win. Like a true Cinderella story, the Clemson victory was led by true freshman quarterback Trevor Lawrence. Note that name: its likely you’ll be hearing it a lot in the future.

Avid fans are already asking: Will there be a rematch next year?  2020 could be the 5th year in a row that the national championship comes down to a game between Clemson and Alabama. Both have won two national championships in the last four years. Seems like we need a tie-breaker, dudes.

what you should know to talk about sports this week

For Those Who Do Not Avidly Follow Professional Sports and Need to Be Able to Talk to a Sports Fan, here are the happenings that you should know about for the week of January 13, 2019:

This weekend is the divisional championships. After that come the conference championship games; and finally, the Super Bowl. The best  (and most fun) way to follow the NFL playoffs is to pick one team and track them all the way through. If/when “your” team loses, pick another. That way, you can feel free to ignore everything else. If you like.

Last week in the wildcard games, the Colts, Eagles, Chargers and Cowboys advanced. This is weekend two of the playoffs, with four big games. (After which four more groups of fans will join the “trail of tears” with the fans of the other 24 teams who are already looking forward to next year.)

Every game is a big game this weekend.

Yesterday, the Kansas City Chiefs and their quarterback and potential MVP Patrick Mahomes soundly defeated the previously surging Indianapolis Colts, 31 – 13. Up until then, Colts quarterback Andrew Luck had been considered the “comeback player of the year.” The Chiefs advance to play in the AFC championship next week. And Mahomes becomes the first quarterback from a Big 12 school to be the winning QB in an NFL playoff game.

The Dallas Cowboys lost to the LA Rams yesterday, 22-30. Los Angeles will play the winner of today’s Eagles-Saints game in the NFC championship next week.

This afternoon the defending Super Bowl champion Philadelphia Eagles, led by back-up quarterback Nick Foles, head to New Orleans to meet the Saints and their quarterback Drew Brees. Is the Nick Foles magic (which carried the Eagles to a Super Bowl win last year) for real? Or is the New Orleans Superdome just too hard a place to win for a road team? We’ll find out.

Also this afternoon, the New England Patriots (who haven’t lost at home this year) host the LA Chargers (who haven’t lost on the road this year.) Fans are keen to see quarterbacks Philip Rivers (age 37) and Tom Brady (age 40) face off. Fun fact: Whenever anyone misspells Rivers’ first name by inserting another L, Pats fans respond that he won’t get that additional L until today.

The “coaching carousel” has spun, 6 of the 8 spots have been filled. Only the Bengals and the Dolphins are still looking for a new head coach. Some of the names are old (Bruce Arians is going to the Tampa Bay Buccaneers). And some are new (Kliff Kingsbury, Tom Brady’s back up quarterback for the Patriots in 2002, is the new head coach of the Arizona Cardinals).

There’s a lot of controversy in NY with the Jets choice of head coach. Mike McCarthy, the historically very successful coach of the Green Bay Packers, stated his strong interest in the Jets.  For some reason, they went with the recently fired Adam Gase of Miami. Fans are saying that Gase didn’t have much success in Miami. Rumor is that Peyton Manning (who played under him when he was the Offensive Coordinator in Denver) lobbed a call in to the Jets General Manager to vouch for him. Jets fans remain unhappy, and former Super Bowl-winning coach Mike McCarthy remains unemployed.

In other head coach news, fans of the Baltimore Ravens question the future of both head coach John Harbaugh and quarterback Joe Flacco. While Harbaugh’s contract has been renewed, the rumor is that Flacco may be traded after losing his status as the starting QB late in the season.

Chicago Bears kicker Cody Parkey received a great deal of grief for missing what would have been a winning 43-yard field goal in the playoffs last week. His final kick not only hit the upright, but also bounced off the crossbar. That’s known in the business as a “double doinker.” Or a “two doinker.” Apparently, he’s actually been getting death threats. On social media, somebody published a photo of him on a boat in warm weather with his wife (the implication being that he’s yucking it up in the Caribbean while Chicago suffers).

And yet. Of the 101 contestants who tried the same kick, from the same yardage in wintry conditions in Chicago yesterday, not one put the ball through the uprights. The “Cody Parkey challenge,” sponsored by Chicago brewery Goose Island Beer Company, was a good reminder to all. Football is hard.

Must know: The Australian Open runs from January 7-27 this year. Nice to Know: The draw has been set, and the result are unremarkable. Roger Federer is playing the number 99 seed to start, and Serena Williams is also playing someone in the top 100. Extra Credit: In an emotional press conference, Andy Murray has announced that the Australian Open will likely be his last match – he is retiring due to his recurring hip issues.

In the NBA, LaMarcus Aldridge put up 56 points for San Antonio against the Oklahoma City Thunder this week, delivering what many are calling the best performance of the year to date.

In NCAA football, Clemson freshman quarterback Trevor Lawrence is now the darling of the media as “the Prototype QB.” He’s a “true freshman,” meaning he just left high school 7 months ago, and now has won the college football national title. The press believes Lawrence would be the #1 pick if he was participating in the NFL draft this year. However, he has to play 2 more years at Clemson. The experts say there’s nothing but downside if he plays (the risk of serious injury is always there), and that he should just sit out the next two years.

power up with us

For a weekly dose of career insights and ideas, sign up for our new newsletter, Power Up, here.