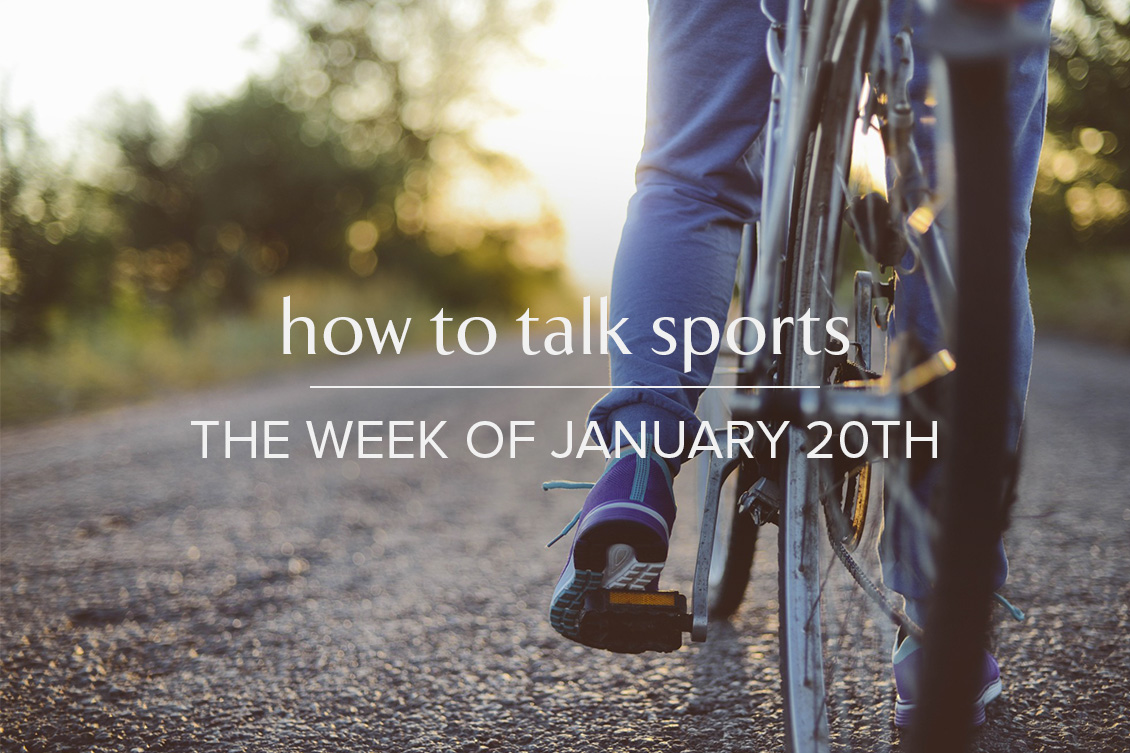 TWIST: This Week in Sports Talk is our weekly recap of how to talk about sports this week like a pro. If you’re just starting to learn about sports, or need a quick summary of what’s up in your favorite league, or just want to know why your spouse keeps obsessively checking the sports scores during important social occasions, here’s what you need to know to talk with a sports fan the week of January 20, 2019.

We begin this week on a joyful note

Everyone is buzzing about a video of UCLA student Katelyn Ohashi scoring a perfect 10 in a floor routine. Her brilliant technical performance was matched by her infectious happiness and sense of fun. Her teammates on the sidelines silently echoed her dance moves, making it a celebration of both skill and camaraderie. If you haven’t seen it yet, you should.

On a related note, kudos to the Greatest of All Time Serena Williams and her show of sportsmanship this week at the Australian Open. Williams was seen comforting a teary-eyed Tatjana Maria after defeating her in the tournament’s opening round, offering encouragement specifically as a fellow mom.

In a sharp contrast, Maria Sharapova was seen at the same tournament dismissively turning away from her defeated opponent, Harriet Dart, who was also in tears. ESPN reported that the Russian player said “I mean, there is no time for that, I’m sorry to say…when you’re playing the first round of a Grand Slam.” Sharapova is known for her “frosty reserve.” Some players believe she has received preferential treatment after returning from her 2016 two-year ban from tennis due to her use of performance-enhancing drugs.

And finally, in more feel-good news, the national champion Clemson Tigers were invited to the White House for a celebratory meal this week. On the menu? Burgers and fries from McDonald’s, Burger King and Wendy’s – plus Domino’s Pizza. Seriously? Winning a national title, being invited to the nation’s capital, and getting to eat what just about every college football player would really like to be eating? Win-win-win. Congratulations, Clemson.

The championship Clemson Tigers at the White House

what you need to know to talk about sports this week

For Those Who Do Not Avidly Follow Professional Sports and Need to Be Able to Talk to a Sports Fan, here are the happenings that you should know about for the week of January 20, 2019:

The two conference championship games will be played today. After that comes the Super Bowl on February 3.

Last week in the division championship games, the Kansas City Chiefs, LA Rams, New Orleans Saints and New England Patriots advanced. Kansas City and New Orleans have the home field advantage today, and the fans of both of those teams are among the most raucous in the NFL. Don’t expect it to be easy for the visiting teams.

Today is the big day for the two conference championship games, and the excitement of NFL fans is adorable and completely infectious. We made a supermarket run yesterday for comfort food in anticipation of the Big Snow Storm, and encountered several gents with carts full of beer and snacks. One yelled happily “I have to clean out the back of the car to make room for all this stuff!” It’s like Christmas morning. Or the day Chanel goes on sale at Bergdorf’s.

It’s not just the quarterbacks who are best-of-breed in these match-ups. Head coaches Bill Belichick, Sean Payton, Sean McVay and Andy Reid are some of the best coaches in the NFL. The Belichick-Reid “battle” is of particular interest.

Will the weather matter?

For the Chiefs-Pats game, the forecast was originally brutal cold, which was thought to benefit the Pats (who are in their 8th straight championship game).  Now it appears Kansas City weather will be a bit warmer.

In an unusual turn of events, the Pats are the underdogs in today’s game, and they’ve responded by taking on the “we don’t get no respect” mantra. Tom Brady and Julian Edelman have implied that their team is being unfairly disrespected. Meanwhile, the rest of the sports world is vocal in its belief that the Pats have gotten plenty of respect in the past few years. “Gimme a break” is the most common response, often accompanied by an F-bomb.

At this point, many football fans are just enjoying this show. The feeling is that the Super Bowl is going to be very entertaining no matter which of these teams make it through to the big game.

Meanwhile, every team not playing today is already focused on next season. In Philadelphia, the debate over who should be the starting quarterback – Nick Foles or Carson Wentz – has already started. So far, Eagles management has been firm: Carson Wentz is the starter. The LA Chargers are planning to re-sign Philip Rivers (who did, in the end, earn that second “L” last weekend). This week the Seattle Seahawks signed Paxton Lynch, Denver’s previous first round draft pick.

The Jets’ new Head Coach Adam Gase had his first New York media day last week, and reporters and fans had a field day discussing his “bug eyes.” Perhaps of more significance, Gase has hired Gregg Williams as Defensive Coordinator. Williams is well- respected for his technical skills. But he’s infamous for the “BountyGate” scandal that occurred when he was with the Saints. He was suspended indefinitely after it was revealed that the team was paying players extra to aggressively go after players on opposing teams.

Must know: The Australian Open runs from January 7-27 this year. In a stunning upset, earlier today Roger Federer’s chances of winning a third consecutive Australian Open title were ended as 20-year-old No 14 seed Stefanos Tsitsipas beat him to advance to the quarter finals. Nice to Know: Maria Sharapova ended her run at the tournament, losing to 15th seed and local favorite Ashley Barty. Extra Credit: Serena Williams is pursuing her eighth Australian Open title and 24th Grand Slam singles trophy overall, which would equal Margaret Court for the most in tennis history.

In the NBA, the LA Lakers are still without LeBron James, and the team is 3-7 since a groin injury sidelined him. They’ve dropped from 4th in the Western Conference to 9th, and are currently ½ game out of playoffs. Meanwhile, the Golden State Warriors are surging. The team scored a record 51 points in the first quarter of a game this week. Finally, James Harden of the Houston Rockets is having an epic year so far this season.

James Harden of the Houston Rockets

In Major League Baseball, Manny Machado and Bryce Harper are still unsigned. And for those experiencing the winter doldrums, take hope. The MLB pitchers and catchers start reporting to Spring Training on February 12 and 13.

Meanwhile, in our friendly football pool, Team Dandelion had a small comeback last week. We took more risk, and it paid off. A lesson for all the kids at home. We’ll see how we do today. Go, Pats!