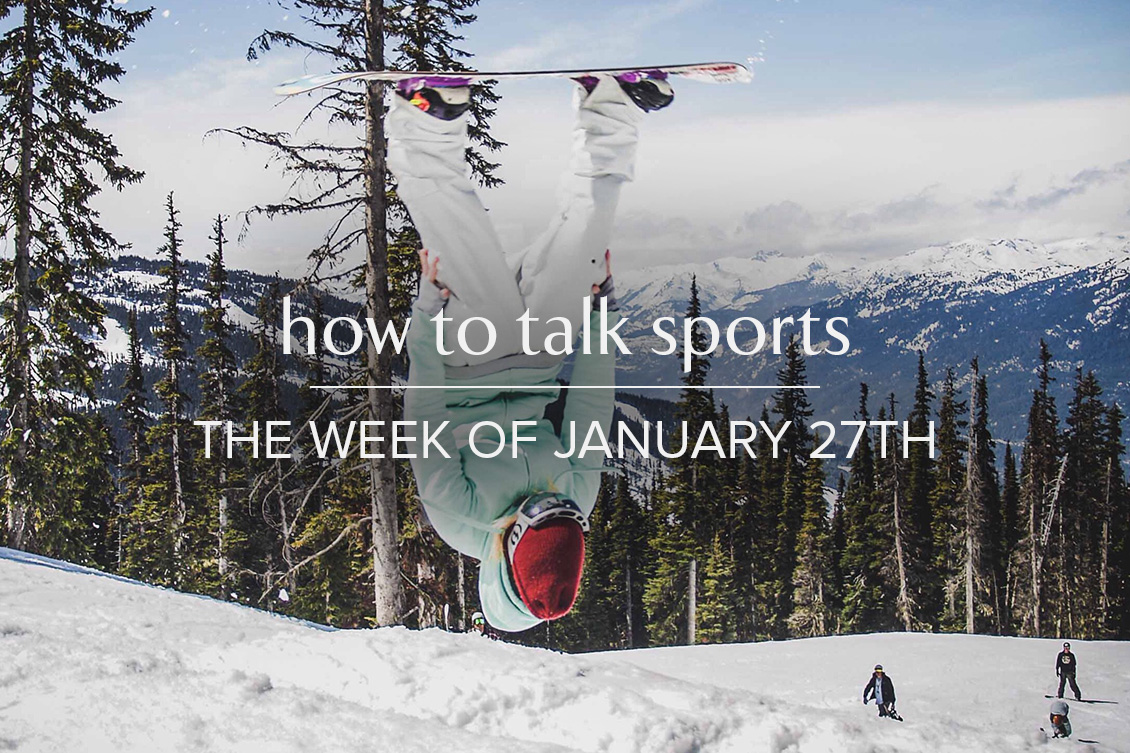 TWIST: This Week in Sports Talk is our weekly recap of how to talk about sports this week like a pro. If you’re just starting to learn about sports, or need a quick summary of what’s up in your favorite league, or just want to know why your spouse keeps obsessively checking the sports scores during important social occasions, here’s what you need to know to talk with a sports fan the week of January 27, 2019.

We begin with a new world record

American gymnast Alysa Liu became the youngest individual winner ever at the US Figure Skating Championships in Detroit this week. The 13-year old took the title with two triple axels and a score of 217.51. Tara Lipinski had previously held the record, winning at the age of 14 in 1997. Lipinski was in the arena as an NBC commentator when her record was broken. A consummate pro, she praised Liu as “a phenomenal talent.” Whoo hoo!

what you need to know to talk about sports this week

For Those Who Do Not Avidly Follow Professional Sports and Want to Be Able to Talk to a Sports Fan, here are the happenings that you should know about for the week of January 27, 2019:

The two conference championship games last weekend turned out to be epic. Both went into overtime (a first for the NFL) and there was serious controversy over a blown call in the LA Rams – New Orleans Saints game.

When the dust settled, the LA Rams and the New England Patriots emerged victorious. They’ll meet at Super Bowl 53 in Atlanta on February 3. Fun fact: the Boston Red Sox won the World Series last fall, and if the Patriots win the Super Bowl, Boston will once again be that rare city with national champions in two professional sports in the same year. It has already happened once for Boston, in 2004. Pittsburgh has come close: the Steelers and the Penguins were national champions in 2008 and 2009, respectively.

The run-up to the Super Bowl is always good fun. There will be lots of statistics thrown around, the Vegas line will be debated, and parties will be planned. And there’s the Pro Bowl today. It’s not taken seriously by avid fans (but they’ll all watch anyway, ’cause hey, it’s still a football game).

Here are some facts you can drop into the conversation with your sports fan this week.

The match-up between the Pats and the Rams hearkens back to the first Super Bowl won by Pats’ quarterback Tom Brady and head coach Bill Belichick in 2001. The Rams (who were then in St. Louis) met the Pats in New Orleans (this was just months before Hurricane Katrina).

Going into the game, the Pats were huge underdogs to “TGSOT” (The Greatest Show on Turf), which is what the Rams under head coach Kurt Warner were called back then. Tom Brady was in his first year as starting quarterback, having taken over from Drew Bledsoe after he suffered an injury. Brady played a mediocre game, but the Pats defense kept them in the hunt. With 2 minutes left and the score tied, Brady drove the Pats down the field to score a game winning field goal at the last second. That play was a harbinger of what he would do many times over in the years to come.

Which one matters more? Experience or age? At this Super Bowl, it’s the Proven versus the Prodigies. And it’s going to be really fun to watch.

As of this posting, the Pats are 2.5-point favorites. It’s expected to be a high-scoring game, since both teams have strong offensive lines. The longest odds on Super Bowl 53 at the moment are 9,999 to 1 that either of the teams ends up with a final score of 4 points. Feeling lucky?

There may still be conversation this week about what happened last weekend in the championship games. Here’s what you need to know.

In the Saints-Rams game, a missed call by the referee with about 2 minutes to go is almost universally seen as having robbed the Saints of a victory. The call was not one that could be video reviewed at the time, but on subsequent viewing, it’s clear that it was a blown pass interference call.

Now the Saints feel robbed, the NFL says the call was blown but there’s nothing to be done about it, and fans want a rematch. The experts on our Sports Desk think that this may lead to what has been proposed for some time: making every play and referee call reviewable. A rules change could happen in the off-season.

This one was a classic nail-biter. The Pats dominated the first half, with the Chiefs totally shut down in the first half for the first time this year.

But then, in the 4th quarter, things got really interesting. Whichever team had the ball scored. The Chiefs scored with 2 minutes to go. Then Tom Brady scored with 32 seconds to go to take the lead. Then the Chiefs kicked a field goal with 8 seconds to go, sending the game into overtime.

The Kansas Chiefs and New England Patriots in the Championship Game

This was the moment at our house when we covered our eyes and watched through our fingers, as one does at a horror movie. ‘Cause you kind of want to see what happens. And you kind of don’t.

In overtime, the Pats won the coin toss, got the ball, and drove it down the field for 5 minutes to score a touchdown and win. Chiefs quarterback Patrick Mahomes never even got to touch the ball in OT. This isn’t the first time this has happened: Tom Brady is 3 – 0 in playoff and Super Bowl overtime. It’s his Thing, actually. Some fans complained that it wasn’t fair that the Chiefs and Mahomes didn’t even get a chance to score. That could lead to a change in overtime rules during the off-season.

In news from other NFL teams, 46-year old Adam Vinateri, a kicker for the Colts, has signed a deal to return for one more year. Who says old dudes don’t have game? We’re loving that Silver Fox vibe he has going on. Meanwhile, in Baltimore, head coach John Harbaugh has signed a 4-year extension of his deal with the team. This follows speculation that he was on the way out, and that quarterback Joe Flacco was injured. But the Ravens won their division with rookie quarterback Lamar Jackson. So the coach gets to stay.

Must know: It was a wild and eventful week at the Australian Open. And not only because of the record heat. The men’s final was “a match-up for the ages” between Rafael Nadal and Novak Djokovic. Earlier today, Djokovic defeated Nadal to win a record seventh title. Yesterday in the women’s final, Petra Kvitova lost to Naomi Osaka. At age 21, Osaka has now won back-to-back Grand Slams (she won the US Open last year) and she’s the new number one seed in the world.

Nice to know:  On the women’s side, Serena Williams had dispatched number one seed Simone Halep and seemed ready to cruise to a record 25th Grand Slam victory. But after being up 5 – 1 in the 3rd set in her quarter-final match against Karolína Plíšková, Williams dropped 6 consecutive games (losing 6 match point opportunities).

Extra credit: The chatter has already started about whether Roger Federer will play a full clay-court swing for the first time since 2016. The French Open at Roland Garros is played on clay, and he has skipped it for the past two years.

And finally, in hot gossip from the locker room, commentator John McEnroe couldn’t stop talking about how during a bio break he unexpectedly ran into a naked Rafael Nadel in the locker room at the Australian Open. Undoubtedly like many others before him, the sight was burned into his retina. He recounted the story during an interview with Nadal, and ended it by saying that after his initial shock, his only thought was “I said to myself I wish I had a body like that.” We feel you, dude.

In the NBA, James Harden of the Houston Rockets continues on his record-breaking tear. LeBron James was named captain of the Western Conference team as players for the All Star game were chosen this week.

In the MLB, four new players were added to the Baseball Hall of Fame. Mariano Rivera, Edgar Martinez, the late Roy Halliday, and Mike Mussina. Mariano Rivera is the first inductee to receive a 100% unanimous vote for election to the Hall. It’s an incredible achievement, considering that former legends Babe Ruth, Hank Aaron, Jackie Robinson, Mickey Mantle, and Willie Mays all preceded him. The previous highest vote-getter was Ken Griffey Jr at 99.3%.

The PGA Tour is on its “West Coast Swing.” On Friday, golfer Tiger Woods squeaked into the next round of the Farmers Insurance Open at Torrey Pines in San Diego. As of this posting, Justin Rose is in the lead. The tournament ends later today.

Hannah Storm and Andrea Kremer will return for a second season calling NFL games on Amazon Prime. They’re the first and only all-female booth to call any major men’s team sport in the US.

Meanwhile, in our friendly football pool, our Team Dandelion has continued to claw our way back up in the standings. We’re in second place at the moment, thanks to much-needed encouragement from the Sports Desk. One more game to go, and its the Big One. Go, Pats!