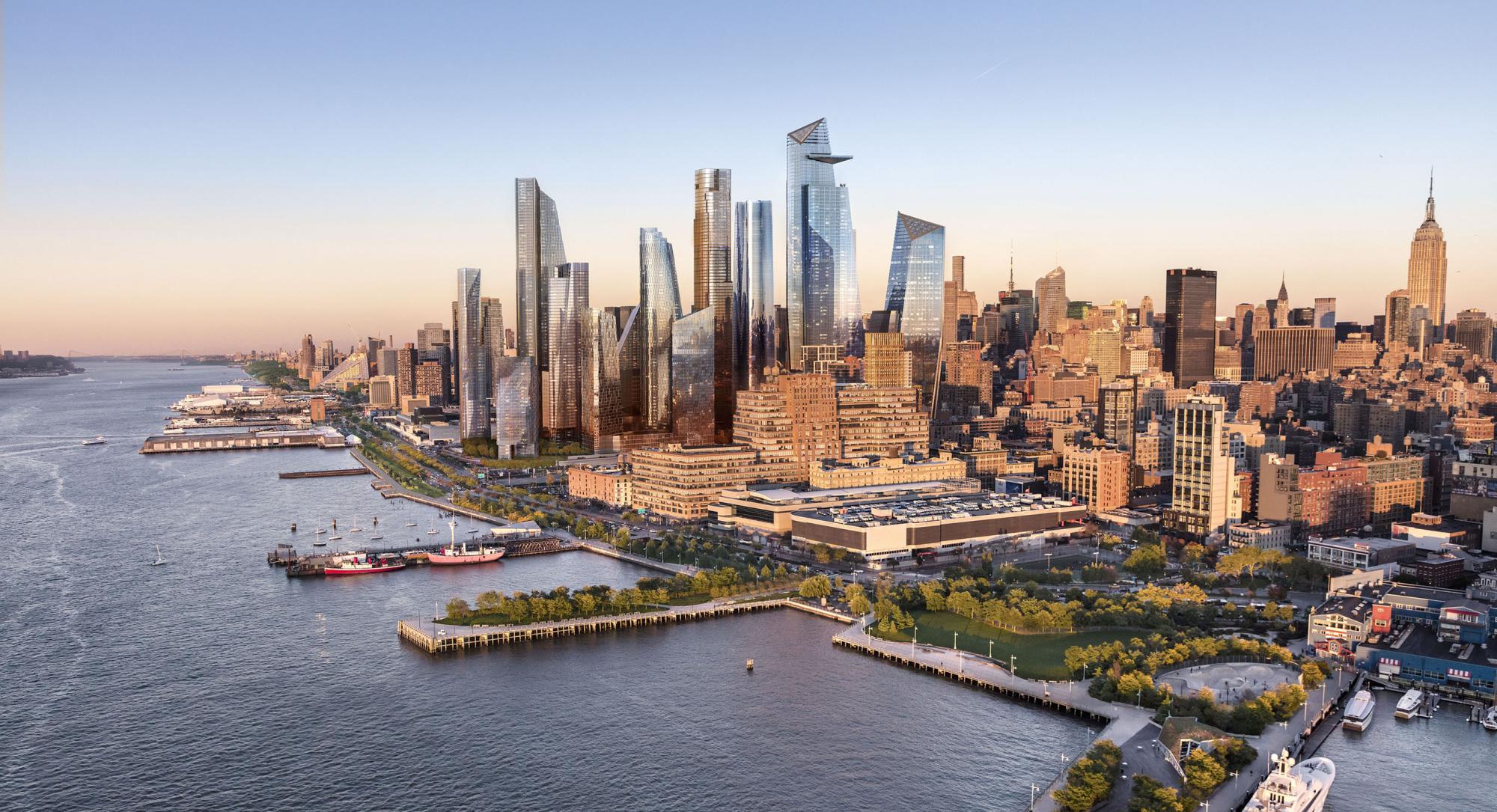 The long-awaited opening of the ultra-luxurious development in New York City, Hudson Yards, is finally here. In our ongoing series, Luxury Lessons, we’ve got the run-down on everything you need to know about this dazzling new addition to the luxury landscape in Manhattan. Shopping, restaurants, art and more. Consider this a West Side Story about a dazzling new level of luxury.

Sometimes if feels as if everywhere you look in New York City there is a new real estate development. However, of all the 160,000 or so construction projects going on in NYC, none are as big and game changing as the mega-project known as Hudson Yards.

It’s the city’s most expensive and largest real estate project, at least according to square footage, in recent memory. Hudson Yards is not only home to thousands of condominiums and new offices. It also houses cultural attractions, retail shops, restaurants and green spaces. For good or for ill, Hudson Yards will transform New York City’s landscape. It may also alter how we think about modern luxury.

What and where is Hudson Yards?

Sitting atop the rail yards bounded by 10th and 11th Avenues and 30th and 34th Streets in Manhattan, the area known today as Hudson Yards has a storied history.

The area was first used as a military fortification for the British during the Revolutionary War. After that, it became home to New York’s first railroad trains in the 1800’s. Subsequently it served as an offloading area for shipping. It was the would-be home to the 2012 Olympics.

Its current incarnation is the product of a 2005 rezoning. The now 28-acre neighborhood on the Hudson River has become the ne plus ultra of modern luxury. That’s quite a West Side Story.

March 15, 2019 is the Grand Opening of the first phase of the property developed by Related Companies and Oxford Properties Group. Expect new landmarks, lots of Instagram-ready vignettes, new fine dining establishments and a fabulous new performing arts space. Oh, and shopping. Lots and lots of shopping.

what you need to know about Hudson Yards

So what do you need to know and where should you go in this monumental new neighborhood?  We’ve rounded up some tips and information on all the places to see, stay and work at come next week and beyond.

So without further ado, here’s the Dandelion Chandelier guide to the new Hudson Yards.

Hudson Yards isn’t just about office towers and condos. The development includes public park space, gardens, public art, and a performance space. And of course, shopping and dining options galore. Which means that everyone is invited to the party.

Currently known as the Vessel (although this name is subject to change), this 150-foot tall structure reminiscent of a beehive was designed by Britain’s Thomas Heatherwick. It sits at the center of the development’s five-acre public park.

The sculpture is made of 54 interconnecting flights of stairs with 2,500 steps and 80 landings.  According to Heatherwick, the Vessel is intended to “lift people up to be more visible and enjoy new views and perspectives of each other.”

Visitors will also be able to take in spectacular views of the Hudson River and the towering glass skyscrapers of Hudson Yards. There’s an elevator for those who can’t make the climb (or for those who just want a ride up or down).

The Vessel at Hudson Yards

The Shops and Restaurants – Opening March 15

Near the Vessel is the seven-story building housing The Shops and Restaurants at 20 Hudson Yards. Designed by Kohn Pedersen Fox with interiors by Elkus Manfredi Architects, the building will be home to a variety of high end restaurants, many helmed by celebrity chefs.

The new eateries include:

A rendering of Estiatorio Milos at Hudson Yards

The shopping spaces will feature names like Dior, Louis Vuitton and Cartier. There will also be more affordable options like H&M, Madewell and Coach.

Hudson Yards will be home to the first-ever New York outpost of Neiman Marcus, which will also include posh dining spots like the Zodiac Room within the store.

Rendering of the Neiman Marcus at Hudson Yards

Located on the second floor of The Shops at Hudson Yards is Snark Park, a permanent exhibition space for immersive art installations designed by Snarkitecture.

The space will re-imagine everyday objects and familiar settings. For example, in its inaugural showcase Lost and Found,  visitors experience a modern interpretation of an enchanted forest.

There will also be a collection of individual stalls serving a wide selection of tapas and pintxos, from signature Spanish jamon to churros and fried seafoods to Spanish sandwiches, salads and pastries. Retail kiosks will be selling a variety of Spanish products.

Located where the Highline meets Hudson Yards is the 200,000 square foot cultural center, exhibition space and performing arts venue The Shed.  Designed by Diller Scofidio + Renfro in collaboration with the Rockwell Group, it features a retractable outer shell and six levels that will house up to 1,250 seated people or 2,700 standing.

The Shed at Hudson Yards

The Edge – Under construction, opening in 2020

The 1,000 foot high Edge on the 100th floor of 30 Hudson Yards is set to be the highest observation deck in the Western Hemisphere when it opens in 2020.

The deck is composed of 15 primary sections, each weighing between 35,000 and 100,000 pounds and will feature 7,500 square feet of viewing space. Visitors can walk 65 feet straight out over a glass floor to see city views both over and out.

From rentals to condos to hotels, there is no shortage of places to stay or live in Hudson Yards.  Highlights include lots of luxe amenities like basketball courts and pools in the condos and rentals, as well as the first of its kind Equinox Hotel.

The 33-story rental building One Hudson Yards was designed by architect Davis Brody Bond and features interiors by Andre Kikoski.  There are 178 apartments here, all with 10-foot ceilings and Manhattan views.  The building’s amenities include an 82-foot pool, a gym, a basketball court and a bowling alley.

Designed by Diller Scofidio + Renfro in collaboration with Rockwell Group, 15 Hudson Yards is an 88-story tower located on the High Line and adjacent to The Shed. While sales efforts launched in 2016, reportedly 40% of the 287 apartments still remain available for purchase. Residents will have access to a 75-foot swimming pool, screening room, a fitness center, a rooftop lounge and a private co-working space dubbed the Atelier.

AD100 architect Tony Ingrao designed each of the apartments hitting the market on March 15th.  Prices start at $5 million for a two-bedroom and expected move-in dates are Fall 2019.  Amenities will include a screening room, a “comprehensive fitness experience” from Equinox and SoulCycle, a kid’s playroom and a “director of residences” who can do everything from coordinate laundry service to book cars.

The Equinox Hotel, which is expected to open in June, will feature 222 rooms, a 60,000 square foot fitness center (Equinox’s largest) and a slew of wellness-focused offerings, including healthy in-room dining and an on-property spa.

Approximately 40,000 or so people will be calling Hudson Yards their place of work thanks to a number of big companies moving their New York headquarters and offices there.  The development includes four new modern office towers to add to the Midtown skyline.

Unlike any other building along the High Line, 10 Hudson Yards bridges over the park, creating a dramatic 60’ public passageway through the building. This Kohn Pedersen Fox-designed skyscraper was the first building to open and is home to tenants like Coach, L’Oreal and social media agency VaynerMedia.

10 Hudseon Yards and the High Line

30 Hudson Yards – Under construction, opening second half of 2019

30 Hudson Yards is set to welcome tenants in the second half of 2019.  Designed by architect Bill Pedersen and Kohn Pedersen Fox Associates, it officially reached its full 1,296 foot height last summer.  In addition to being the home of the Edge observation deck, the tower will welcome companies like HBO, Time Warner, CNN and Hudson Yards developers Related and Oxford Properties Group as tenants.

Spanning an entire city block, 50 Hudson Yards will be the last of the office towers to be completed.  The work of British star-architect Norman Foster, the building will stand 985 feet tall and will feature private sky lobbies, outdoor terraces and of course, staggering views.

55 Hudson Yards – Under construction, opening second half of 2019

The architects at Kohn Pedersen Fox teamed up with Kevin Roche John Dinkeloo and Associates to create the glass office tower known as 55 Hudson Yards.  Located at the intersection of Hudson Yards, the High Line and Hudson Park & Boulevard, it has a façade inspired by the manufactured cast iron façades of Soho buildings and the revitalized High Line district.  A few law firms have signed on as tenants, along with several healthcare and private equity firms.

There you have it. Everything you need to know right now about New York City’s most ambitious and transformational development.  With so much going on and even more to come, it’s definitely worth a ride to the end of the 7 train to check out. We’ll see you at the top of the Vessel. We’ll be the ones with the Neiman Marcus shopping bags in our hands.

What are you most excited about at Hudson Yards? Where will you be going first?