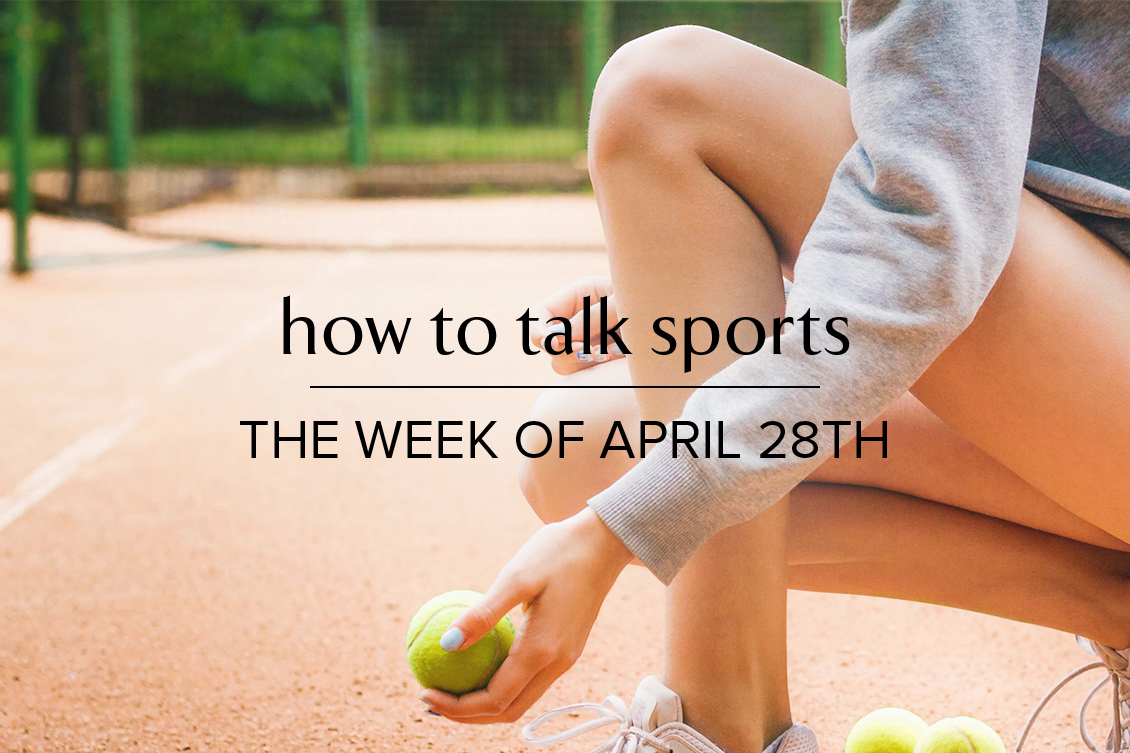 This Week in Sports Talk (TWIST) is our weekly recap to help you learn how to talk about sports right now. If you’re just starting to learn about sports, or want a quick summary of the headlines, or even if you just want to fake a modicum of sports knowledge at work or at the bar, read on. Here’s what you need to know to talk with a sports fan the week of April 28, 2019.

sports talk: what you need to know this week

Boston could become the first city to win all four major sports championships in one season. The Red Sox and Patriots have already won world championships in baseball and football, respectively. The Bruins are now favored in hockey’s Stanley Cup playoffs (they won the first game of their second series against the Blue Jackets on Thursday night). And in the NBA playoffs, the Celtics have advanced to the semifinals. Sure, its a long shot. But it’s possible. And no city has ever done that. We’re rooting for you, Beantown. Get after it!

Shifting gears to much more serious news, a terrible situation has worsened in the NFL. New audiotape surfaced this week of Kansas City Chiefs wide receiver Tyreek Hill being accused of child abuse by his fiancé. The child has been removed from their home and Hill has been suspended from all NFL activities pending further investigation.

This week, Los Angeles Angels first baseman and future Hall of Famer Albert Pujols moved ahead of Babe Ruth with his 1,993th RBI (run batted in). Days later, he moved past Lou Gehrig for fourth place on the all-time RBI list with 1,995. Next up? Barry Bonds, who had 1,996 RBIs.

new records at the london marathon

how to talk about sports this week

For Those Who Do Not Avidly Follow Professional Sports and Want to Be Able to Talk to a Sports Fan, here are the happenings that you should know about for the week of April 28, 2019:

The NBA Playoffs are in full swing, and there was plenty of drama this week. In Game 5, the Portland Trail Blazers continued their hard-fought and somewhat acrimonious first-round battle with the Oklahoma City Thunder.

The Blazers came back from being down 15 points in the fourth quarter to tie the game. Then, Damian Lillard, who already had 50 points in the game, took a 37-foot step-back shot over Paul George’s head and drained it for the buzzer-beating win. Afterward, Dame waved “bye bye” to the Thunder and Russell Westbrook. Paul George complained that it was a “bad shot” to take (but many said that he did a “bad job” defending it). The Blazers move on to the next round.

Damian Lillard scores the winning shot in the NBA Playoffs Game 5 against the Oklahoma City Thunder.

In the West, the conference semifinals will see the Houston Rockets face off against the defending champion Golden State Warriors. It took the Warriors 6 games to take out the LA Clippers, including two losses at home. Most observers think that Kevin Durant’s uncertain status has been a cloud over the team all year, and continues to be one now. Durant finished Game 6 with 50 points, while Steph Curry left the game after twisting his ankle. Curry assured fans that he’ll be ready for Game 1 against the Rockets later today.

The Denver Nuggets held on to defeat the San Antonio Spurs in Game 7 last night. They’ll meet the Portland Trail Blazers in the semifinal round. Game 1 is tomorrow night.

In the East, the semifinals see the Toronto Raptors take on the Philadelphia 76’ers. Toronto currently leads the series 1-0. And the Milwaukee Bucks face the Boston Celtics. These should all be really good games – expect lots of chatter about them in the coming week.

John “Hondo” Havlicek, one of the all-time greats of the Boston Celtics, passed away this week at 79. He had been suffering from Parkinson’s disease.

The first round of the NFL Draft was held Thursday night. To the surprise of almost no one, the number one pick was Heisman Trophy winner Kyler Murray. The Arizona Cardinals took the quarterback from Oklahoma as #1.

Dude, can we just say that we LOVE the pink three-piece suit? So fresh! Congratulations.

Quarterback Kyler Murray is the #1 pick in this year’s NFL Draft. He’s going to the Arizona Cardinals.

The first round of the draft generally went as expected. Nick Bosa was the number 2 pick; he’s going to the San Francisco 49’ers, as predicted.

However, there was one notable exception. The General Manager of the New York Giants is getting a huge amount of criticism for his #6 pick of Duke quarterback Daniel Jones. Most experts had Jones as the #5 quarterback in the draft, and expected him to go in the second round. Jones has a strong connection to the Giants “family,” having been coached by David Cutcliffe, who also coached both Eli and Peyton Manning in college. Maybe the Giants are counting on Jones to be a good fit and to make a smooth transition as Eli retires?

Maybe, but fans are fuming that the Giants previously passed on Josh Allen. And that this year, they let their division rival Washington pick up Ohio State quarterback Dwayne Haskins, who is viewed as a much stronger prospect (Haskins ultimately went at number 15, which was much lower than expected).

Daniel Jones is going to the New York Giants

After picking up Kyler Murray in the draft, the Arizona Cardinals subsequently traded last year’s #10 pick, quarterback Josh Rosen, for a 2nd and 5th pick in next year’s draft. Rosen is headed to the Miami Dolphins.

That means the four starting quarterbacks in the AFC East are almost all second-year QBs chosen in the top 10 in the 2018 draft. The New York Jets’ Sam Darnold, the Miami Dolphins’ Josh Rosen and the Buffalo Bills’ Josh Allen. The fourth one in this quartet? That would be Tom Brady, who was chosen in the 6th round at number 199 in the 2000 draft.

Josh Rosen is headed to the Miami Dolphins

As a training ground for the NFL, current college national champion Clemson has won the day. The Tigers saw three of their defensive linemen go in the first round this year. Most view Alabama and Clemson as having the rosters with the most “NFL-ready” players.

And speaking of winning the day, this week Clemson’s head coach, William “Dabo” Swinney, signed a 10-year, $93 million contract extension, making him the highest-paid coach in college football. At least for now. Swinney has led the Tigers to two national championships in the last three years. Can’t wait to see what he and Trevor Lawrence can accomplish this fall.

The first round of the NHL Playoffs is done, and the second round has started. The headline? Basically, all of the teams favored to win were upset in the first round. It was one of the most extraordinary starts to the NHL playoffs ever. And it showed in the ratings: this year’s NHL playoff first round achieved the highest ratings in 7 years.

There was a lot of action on this ice this week, including a surprising win by the San Jose Sharks. The Sharks were down 3 – 0 to the Las Vegas Golden Knights in their game 7, with 10 minutes to go in the third period.  The Vegas odds-makers concluded that they had a 1.19% chance of winning at that point.

Then, a Sharks player was pushed, hit his head on the ice, and had to be removed. The referees called a major penalty – and one of the Knights’ players had to sit out for 5 minutes. The Sharks quickly scored 3 goals to tie the game. They went on to win 4 – 3 in overtime. The Sharks advance to the next round. Meanwhile, the Knights liken this episode to the NFL’s recent issues with referee calls. In the Saints-Rams playoff game last season, many believe that a blown ref call changed the outcome of the game.

The Sharks defeat the Vegas Golden Knights in Game 7

The entertaining, limbo-dancing Carolina Hurricanes won game 7 in double overtime to advance to the second round of the playoffs. They’ll face the New York Islanders.  After winning Game 7 against the Toronto Maple Leafs, the Boston Bruins have already defeated the Columbus Blue Jackets in the first game of round 2.

The St. Louis Blues have already won Game One of the second round against the Dallas Stars.  And the San Jose Sharks are playing the Colorado Avalanche (still really don’t like that team name. Just sayin’).

It’s hockey’s moment in the sun, so it’s time to get smart about these team names. Yes, there is a major hockey team in Columbus, Ohio. Showing that you know this will definitely win you some street cred this week.