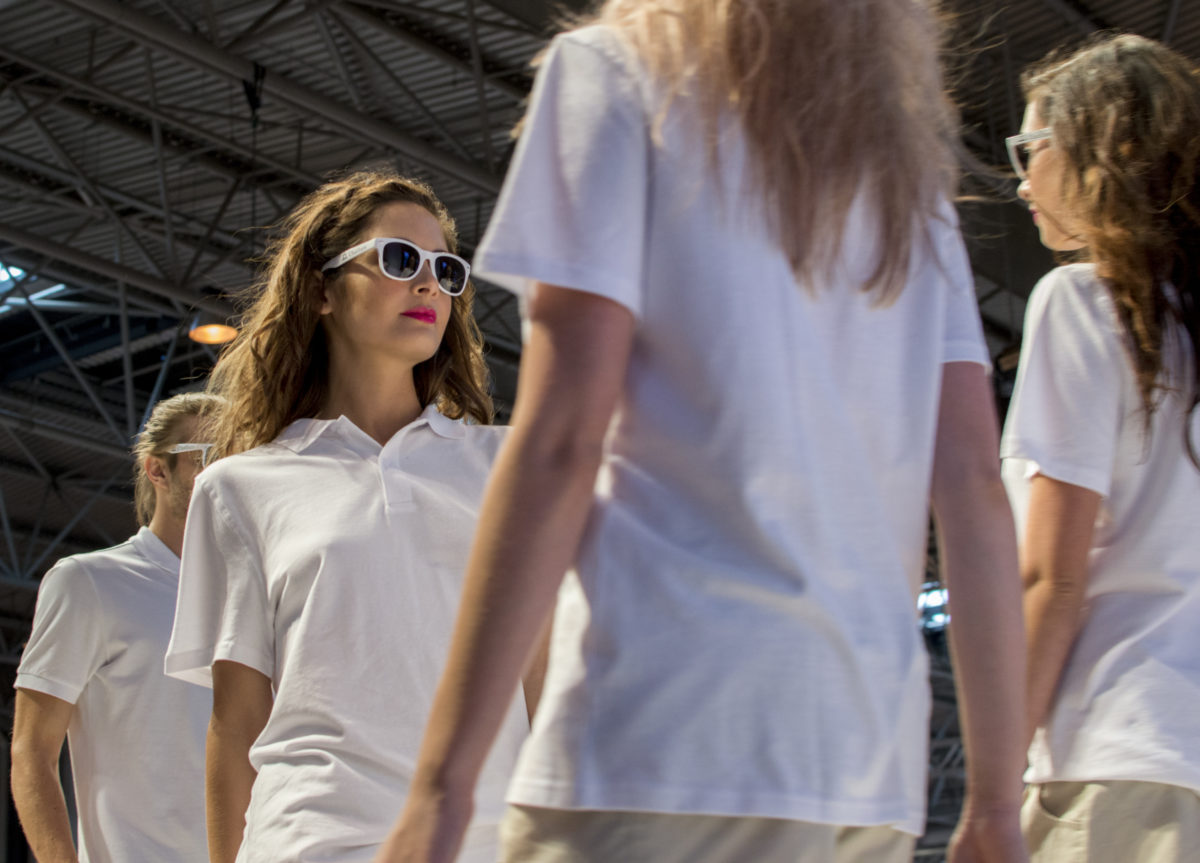 Fashion and film are the perfect pair. They meet in runway shows, at film festivals and on Hollywood red carpets. But our favorite mind-meld between fashion and film is in movies about luxury fashion designers, fashion models, fashion magazines and shopping. Our film expert and correspondent Abbie Martin Greenbaum shares our list of the best films about luxury fashion.

film and fashion are the perfect pair

The fashion world has always and will always be a complex, beautiful beast. It’s a polarizing and at times divisive business filled with exhilarating narratives and notorious personalities. And of course, stunning designs.

What better way to showcase such a visual artistic medium than with another visual artistic medium? Cinema is the ideal mate for couture. Why else do we find videos from fashion shows so irresistible? But it’s not just on the catwalk and on the red carpet where fashion and film collide, collude and conspire. There are some fantastic movies about luxury fashion. Some are satirical, and others dead serious. All are gorgeous eye candy.

Here are 10 of our favorite recent fictional and documentary films about fashion, designers, models, magazines, luxury emporiums and the glittering world of high-end fashion. They’re in rough order from most serious to most satirical/superficial.

Think back a couple of years, and you may remember Phantom Thread (2017), the aesthetically pleasing masterpiece nominated for six Academy Awards. It’s no surprise that Paul Thomas Anderson’s film won for best costume design.

In this film about a fashion designer, Daniel Day Lewis stars as the fictional Reynolds Woodcock. Woodcock is an eccentric and demanding genius, and it is his whims and work that create the setting for a strange and wonderful story. Though the center of the film revolves around Woodcock’s complex power struggle with his muse and fashion model Alma, played by Vicky Krieps, there are enough beautiful dresses displayed to keep your heart and eyes content.

If you’re looking for a film about a world-famous fashion designer, the French biopic Coco Before Chanel (2009), directed by Anne Fontaine, is the perfect choice. Audrey Tatou stars as Coco Chanel. She plays the role with nuance and sympathy, revealing the inner life of a woman viewers may have previously known only through her work.

The story starts off with Chanel in an orphanage. We follow her journey as she builds her way to iconic status from the very bottom of the industry. The movie fully commits to the mood of the moment, letting Chanel’s hardships permeate the film’s ambiance. As a result, the triumph she eventually reaches feels hard-won, and will leave you cheering for all that she achieves. You may never look at a Chanel handbag the same way again.

Frédéric Cheng’s documentary Dior and I (2014) is another cinematic peek behind the curtain in the life of a fashion designer. This time its Raf Simons, during the year he became the creative director at Dior, in 2012.

The film covers everything about the creation of Simons’ new couture line – from the the anxieties about how it will be received to the snags in production. For those who truly want to be swept up in the madness, this is a gritty behind-the-scenes look at what actually goes into producing fashion of this caliber. The high stakes are clear. And you get to watch as the apparel and the brand come to life on screen.

Iconic Italian fashion designer Valentino Garavani announced in 2007 that he would retire, after running his widly successful fashion house since 1959. In the documentary film Valentino: The Last Emperor (2008) director  Matt Tyrnauer details the final two years of Garavani’s career as the designer of his eponymous brand. Throughout the transition, the designer is accompanied by Giancarlo Giammetti, his partner in business and life.

The film is gorgeous and moving in its own right. With the benefit of hindsight, it’s also an important case study in how to transfer creative responsibilities when a founder steps down. Valentino is one of the few who got this right. Upon Garavani’s retirement, design duties were first shared between Maria Grazia Chiuri and Pierpaolo Piccioli. When Grazia Chiuri was named lead designer at Dior, Piccioli took the reins solo, and has had a smashing success as he crafts a new era for the brand. Lots of luxury and founder-led businesses could take a lesson from it all.

In Colette (2018), which had its world premiere at Sundance, Keira Knightley stars as author Sidonie-Gabrielle Colette. After moving to Paris in the early 20th century, Colette agrees to ghostwrite a semi-autobiographical novel for her husband. Its success inspires her to fight for creative ownership and agency over her own fate.

While strictly speaking, it’s not a film about the fashion industry, Knightley embodies the fierce spirit of Coco Chanel in the title role. And the much-beloved and now dearly-departed Paris luxury fashion retailer Colette was named in memory of the actual Colette. The film is as much about the ability of what we wear to empower us as it is about the writing life and marriage at the turn of the last century. And Knightley’s wardrobe is impeccably chic.

6. scatter my ashes at bergdorf’s

Taking a look at the fashion world through a different lens, Matthew Miele’s documentary Scatter My Ashes at Bergdorf’s (2013) is about luxury fashion retailer Bergdorf Goodman. What makes it especially watchable is that it’s not only about fashion. Miele also tells the story of the history of this beloved department store, and the way it became the iconic location it is today.

You’ll see an array of well-known faces who are regular Bergdorf’s shoppers. And you’ll learn more about each aspect of the establishment’s operations – including, of course, the beautiful fashion. For those who enjoy the cinematic, almost mythical aura of the fashion world, you’ll appreciate this tribute and love letter to one of the most revered institutions in the business.

Dedsigner Vera Wang in Scatter my Ashes at Bergdorf’s

The September Issue (2009), RJ Cutler’s documentary about Vogue and its fearless leader Anna Wintour, first premiered at the Sundance Film Festival. Filmed during the weeks prior to  publication of the September issue of the fashion magazine – which is always its largest and most-read – this film is a fascinating window into the worlds of fashion and publishing.

The movie does a balanced job acknowledging all of the preconceived notions about Wintour as a person, and even the fashion world as a whole. Then it plows forward, showing the raw talent and power possessed both by Wintour and by Grace Coddington (who practically walks away with the film). This is definitely one of the best documentaries on the subject. If you love fashion or publishing, it’s is a must-see that remains relevant even 10 years after its first showing.

Sandy Chronopoulos’ documentary about Zac Posen, House of Z (2017), is another that goes under the surface of the seemingly effortless life of a designer. The film chronicles the designer’s climb back to the top after a hard fall early in his career. It takes a different tone than some of the other films on this list, since it has a different narrative. It’s a cautionary tale about what might come after immense power and success.

Rather than seeing global recognition as the end of the story and reveling in the mystique of the fashion world, the filmmaker chooses instead to analyze the darker elements of the industry, showing its brutal underside. Through interviews and archival footage, you get to know the man at the center of this narrative. And you’ll certainly find yourself rooting for him.

Yves Saint Laurent stars Pierre Niney as the titular designer, while Gaspard Ulliel plays him in Bonnello’s version. Watching both of these films in tandem is the best way to fully grasp the life of YSL. Lespert’s operates more as a traditional biopic, showing Laurent’s actual designs. Though Bonnello’s takes a bit more poetic license, his portrait of Laurent – even if it is fictionalized – is an arresting one. It beautifully captures YSL’s era, and paints the designer as a flawed but magnetic figure.

No list of films about the fashion industry can be fully complete without The Devil Wear Prada. (2006). Meryl Streep is Miranda Priestley, the commanding editor-in-chief of a fashion magazine eerily similar to Vogue. She was nominated for an Oscar for her performance. Anne Hathaway is her intelligent and highly unfashionable assistant. There’s love, betrayal, a trip to Paris Fashion Week and a lesson or two about the enduring cultural relevance of fashion design. Plus some seriously gorgeous handbags.

While not about the fashion world per se, last year’s Crazy Rich Asians (2018) was like watching a runway show on steriods. It’s a romantic comedy with a beating heart. And lots and lots of shopping and costume changes. The ensemble cast is brilliant, and the clothes are to die for. For those who are interested, Michelle Yeoh’s wardrobe is a master class in how to dress like a modern woman of power.

Those are our recommendations for the best recent films about luxury fashion, fashion designers, models, and fashion magazines. What’s your favorite? Did we miss anything?

For a weekly dose of career insights and advice, sign up for our Sunday newsletter, Power Up, here.