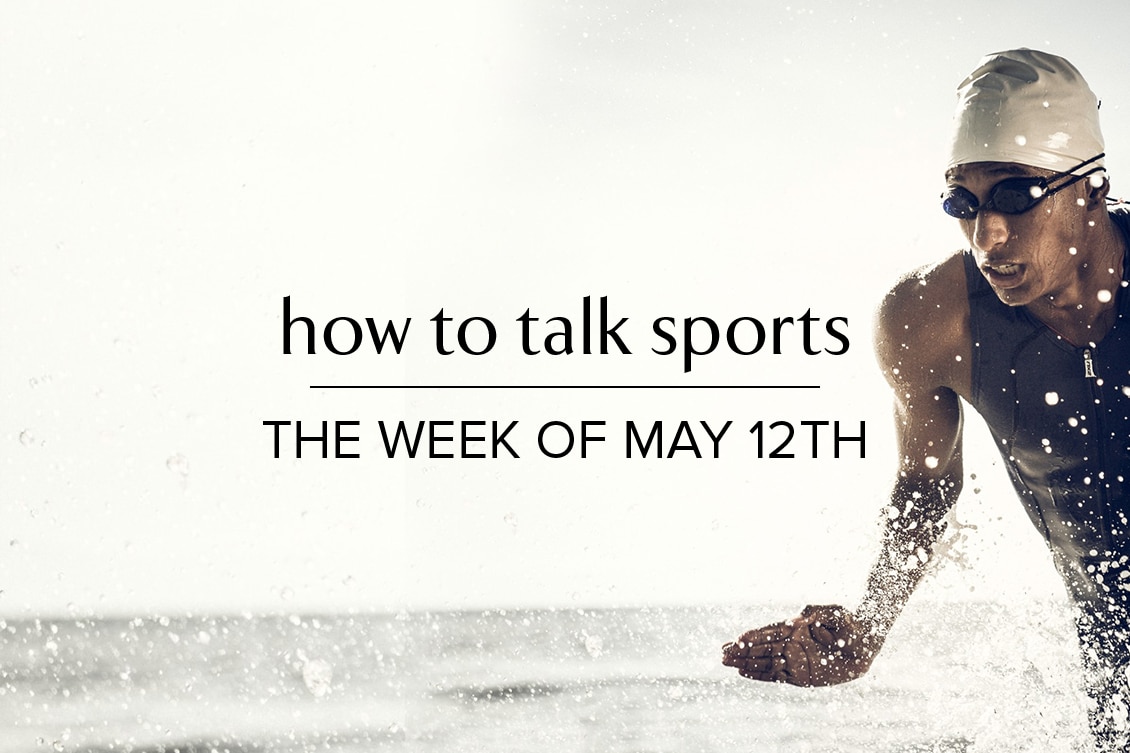 This Week in Sports Talk (TWIST) is our weekly recap to help you learn how to talk about sports right now. If you’re just starting to learn about sports, or want a quick summary of the headlines, or even if you just want to fake a modicum of sports knowledge at work or at the bar, read on. Here’s how to talk to a sports fan the week of May 12, 2019.

First, some short takes, ’cause we know you have your hands full spoiling Mom today, so you’re a little distracted. Step away from the waffle-maker for just a minute.

an all-England final in the Champions League

Grown men cried in public this week after an epic pair of improbable wins in what some would call real football. On Tuesday, Liverpool beat Barcelona in one of the greatest Champions League matches ever. The next day, Tottenham beat the Dutch team Ajax in their Champions League semifinals. Now they’ll meet each other in the Finals on June 1 in Barcelona. It will be Tottenham’s first Champions League final ever. If Liverpool wins, it will be the first time since 2005. Expect the UK to remain fully in the grip of football fever for the rest of the month.

Tottenham Hotspurs celebrate their victory in the Champions League Semifinals 2019.

the preakness loses some luster this year

The Preakness, the second leg of horse racing’s triple crown, is this coming weekend. But there won’t be much fanfare this year. Kentucky Derby winner Country House is not running – he’s out with a cough and a possible virus. It’s the first time that the Derby winner will miss the Preakness since Grindstone in 1996. Meanwhile, the owners of the horse that was first to cross the line in the Derby but then disqualified, Maximum Security, refuse to race him. With no chance for a Triple Crown Winner, or even a Kentucky Derby rematch, there’s not much at stake at this year’s Preakness.

federer returns to the clay in Madrid

Roger Federer returned to playing on a clay court for the first time in three years at this week’s Madrid Open. But it lasted for only three matches. A day after winning a very close match against Gael Monfils, he lost in the quarterfinals to Dominic Thiem. During the match against Monfils, officials called a penalty against Federer for ball abuse after he seemed to get angry and hit a ball out of the stadium. The player was more sanguine in the press conference after his loss to Thiem, saying “I feel good on the clay right now. It’s been a good week. Frustrating, clearly. But nevertheless, if I take a step back, it’s all good.”

Roger Federer at the Madrid Open 2019

The NFL was in the house for two significant social events this week. At the Kentucky Derby, Patriots quarterback Tom Brady bet former teammate Danny Amendola (who is now with the Detroit Lions) that he couldn’t throw a football far enough to hit a building. Amendola promptly made the throw and won $100,000.

Two nights later, the pink carpet at the Met Gala was lousy with football and other pro sports stars. Tom Brady and his wife Gisele Bündchen are fixtures at the event every year. This year they were joined by Super Bowl LIII MVP Julian Edelman, who hammed it up with Cleveland Browns receiver Odell Beckham Junior and Saquon Barkley. Also spotted on the pink carpet? Serena Williams, Dwyane Wade, Colin Kaepernick and Alex Rodriguez.

Now that we’re warmed up, let’s get to the real deal updates.

For Those Who Do Not Avidly Follow Professional Sports and Want to Be Able to Talk to a Sports Fan, here’s what you really need to know if you want to talk sports this week.

The NBA Playoffs are in full swing, and the Conference Semifinals have been pretty exciting. In the West, the defending champion Golden State Warriors knocked out the Houston Rockets at home in Game 6. Steph Curry stepped up and scored 33 points. Kevin Durant was on the bench with a strained calf. The Warriors will play either the Portland Trail Blazers or the Denver Nuggets in the Western Conference Championship. The Blazers visit the Nuggets this afternoon for Game 7.

May 5, 2019; Portland, OR, USA; Portland Trail Blazers guard Damian Lillard (0) tries to dribble around Denver Nuggets guard Will Barton (5) in the second half of game four of the second round of the 2019 NBA Playoffs at Moda Center. Mandatory Credit: Jaime Valdez-USA TODAY Sports

In the East, the Toronto Raptors meet the Philadelphia 76’ers at home for their Game 7, also this afternoon. The winner of that game will be taking on the Milwaukee Bucks and their star player Giannis Antetokounmpo in the Eastern Conference Championship.

Game 7 between the Phillies and the Raptors is this afternoon

Game 1 of the Western Conference Final is Tuesday; in the East, Game 1 is Wednesday.

The prospects for a Boston Slam went down this week, along with the Celts. But the Bruins are still alive! The Celtics lost in 5 games to the Milwaukee Bucks – in the words of our Sports Desk, it was “an ignominious performance.” Many observers felt that Kyrie Irving had given up in the 2nd quarter of Game 5. Some said he actually gave up on the Celtics at the beginning of the season.

Irving was surprisingly untroubled in his comments after the game. Was he ultimately just a rented player? Our Sports Desk notes that Irving went to Boston to be the team leader, to move out of the shadow of LeBron James. But apparently, he ended up not liking being the leader, didn’t get results, and will now move on. The two top destinations that he’s rumored to be heading for? They’re both in New York: the Nets and the Knicks. Many people cynically comment that Irving would make for a perfect Knicks player.

Kyrie Irving in Game 7 against the Milwaukee Bucks

This Tuesday, May 14 could be defining moment for the New York Knicks for the next 10 years or more. Or perhaps for some other NBA team. That’s the day the NBA lottery will determine who will get the first draft pick – and presumably who will get Zion Williamson.

We wonder if Zion Williamson and Kyler Murray ever hang out together? Seems like they’d get on well together.

The LA Lakers’ dysfunction continues. This week they came close to hiring Tyronn Lue, LeBron James (LBJ)’s former coach in Cleveland, to fill the head coach job after the departures of Magic Johnson and Luke Walton. But at the last minute, Lue pulled out. Word is he was offered only a 3-year deal (he wanted 5), and also told he had to hire Kurt Rambis as part of his management team, so he declined.

After interviewing 5 candidates, the team settled on a compromise candidate, hiring Frank Vogel on a three-year contract. Former Brooklyn Nets and Milwaukee Bucks coach Jason Kidd will join him as an assistant. Kidd played with LBJ on the US Olympic team. Most think that the new coach is in a tough bind: he has to cater to LBJ and rejuvenate the younger players on the team. Owner Jeannie Buss has her hands full.

Meanwhile, conspiracy theorists think the fix is in and that the Lakers – who have only a 2% chance to win the draft lottery- will somehow get #1, and draft Zion Williamson. That said, New Yorkers are really hoping that the fix is in for the Knicks – they have a 14% chance to get the #1 slot.

The second round of the NHL Playoffs is underway. In the Eastern Conference Final, the Boston Bruins took Game 1 from the Carolina Hurricanes. Game 2 is this afternoon.

The San Jose Sharks achieved a 6-3 win against the St. Louis Blues in Game 1 of the Western Conference Final last night.

Game 1 of the NHL Conference Playoffs. The St. Louis Blues are defeated by the San Jose Sharks.

As of this posting, the Vegas odds makers are calling the Blues versus the Bruins for the Stanley Cup Final.

The LA Angels’ Albert Pujols got Run Batted In (RBI) number 2,000 this week. Only two other players have officially gotten to 2,000: Alex Rodriguez (2,086) and Hank Aaron (2,297). So Pujols will likely beat them both before his career is done. In the Annals of Churlishness, mark this one down: the man who caught Pujols’ home run ball – the one that gave him 2,000 RBI’s – refused to give it back. Despite several entreaties, he kept it, saying he didn’t like the way security treated him. Bad karma, dude.

Albert Pujols’ teammate Shohei “Baby Ruth” Ohtani returns to the lineup as a Designated Hitter (DH) after undergoing Tommy John surgery in October. The 23-year old slugger-pitcher will not pitch this season until he’s fully recovered; he’ll be only a DH for remainder of the season.

Tampa Bay is still leading the American League (AL) East after winning a game last night against the New York Yankees in Tampa. The Yanks are 1.5 games back as of this posting. The defending world champion Red Sox are 4 games back. In the AL West, the Astros are 5.5 ahead of the rest. In the National League, the Philadelphia Phillies, Chicago Cubs and LA Dodgers are on top.

That’s how to talk to a sports fan the week of May 12, 2019. You’re good to go. Give all the people in your life who are like mothers to you lots of love today, kids. See you next week!