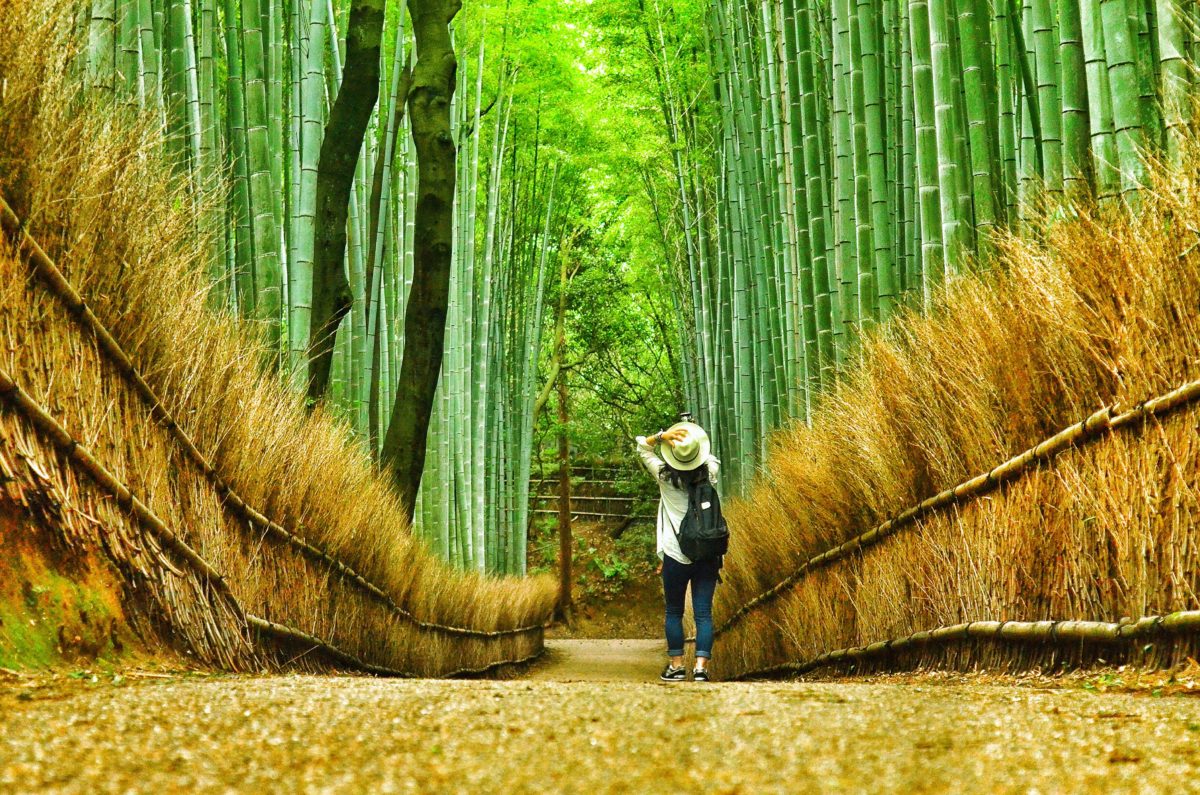 Science tells us that spending time in a garden is excellent for our health and well-being. We intuitively felt that, but its great to have validation from the experts. So where will you go to get your dose of Vitamin-G this spring and summer? To help you find the nearest lovely spot, we’ve previously shared our top picks of the best gardens in Europe and in the Americas. Next up, we answer the pressing question: what are the most beautiful gardens in Asia?

what makes a garden “most beautiful?”

What makes for the perfect garden? What’s the right combination of art and engineering, natural and constructed elements, artifice and reality, formality and eccentricity?

Should nature be allowed to take over the garden, or should we manipulate nature to create something more stylish and composed? And how does that balance vary by region of the world, and by era? Is the most beautiful garden epic in scale, or intimate?

Those are questions you can ponder in your travels this spring and summer. In honor of the season, we asked our far-flung correspondents to share their thoughts about the most stunning and luxurious gardens in the world.

We received so many passionate responses from our global network of contributors that we decided to make this a four-part series. Here’s the third installment of our Dandelion Chandelier list of not-to-be-missed gardens worldwide. It’s our curated list of some of the best and most beautiful gardens in Asia.

the most beautiful gardens in Asia

Several of the best gardens in Asia, not surprisingly, are in China.

Our Paris Bureau Chief recommends the Yu Yuan Ming Gardens in Shanghai’s Old Town, with their beautifully preserved architecture (although you should go early on a weekday to avoid the crowds). Yu Yuan means “Garden of Peace and Comfort.” 400 years old, the gardens were built in the Ming Dynasty during the reign of Emperor Jia Jin, and took 20 years to complete.

Highlights include the Hall of Serenity and the Tower for Watching Waves in the Inner Garden. And the famous Exquisite Jade Rock, a 5-ton slab procured by the Huizong emperor of the Northern Song from the waters of Lake Tai. It’s meant to represent mountain peaks in classical Chinese garden design.

If you’re feeling adventurous, you can climb to the top of the Great Rockery, which consists of 2,000 tons of rare yellow stones fused together with rice glue and designed by a famous garden artist, Zhang Nanyang. If you visit during the Spring Festival, the garden will be decorated with beautiful lanterns shaped like dragons and phoenixes.

In Beijing, the grounds of the Summer Palace will transport you back to imperial days. Initially built in 1750 by Emperor Qianglong, the royal family’s living quarters, pagodas, pavilions and the Dowager Cixi’s marble boat are all immaculately preserved.

Don’t miss the covered walkway with animal scenes, and the boat ride on Kunming Lake to an island temple. Just a few steps away, the Aman Summer Palace resort is an ideal place to stay. The property includes a number of historical dwellings, including those once used by guests awaiting an audience with the Empress.

The Dowager Cixi’s marble boat at the Summer Palace in Beijing. Courtesy Photo.

Liu Yuan (the Lingering Garden) in Suzhou is a bullet-train ride away from Shanghai. Suzhou is known as “the Venice of the East,” and our Asia Bureau Chief reports that it is home to some of the most beautiful gardens in Asia. “Suzhou is known for the literati gardens from the Tang Dynasty (618-907 AD) – where the pinnacle of the scholar classes built magnificent homes and gardens governed on the principles of yin-and-yang.”

There are still over 70 private gardens in Suzhou, so you could spend weeks there touring if you’re passionate about horticulture. While you’re there, our Bureau Chief recommends a visit to the Suzhou Museum, which is one of I.M. Pei’s most recent masterpieces – and a significant cultural site in itself.

Near Suzhou is Hangzhou, which is also known for its scenery and the nearby WuXi (West Lake). The city is also famous for its longjing tea, considered by tea connoisseurs to be the finest type of Chinese tea. The Bureau Chief suggests staying at either the Aman Resort or the Four Seasons Resort, both located in Hangzhou/West Lake.

4. Gardens by the Bay

Sing is one of our favorite places, and the fantastical Gardens by the Bay in Singapore have to be seen to be believed. The Flower Dome is the largest glass greenhouse in the world, showcasing whimsical displays of flowers and plants. The orchid gardens are incredible. Dragonfly and Kingfisher Lakes provide a lovely setting for viewing aquatic life and plants. The Cloud Forest is a large geodesic dome containing mountains, a miniature rain forest, and rare plants and flowers, all shrouded in mist.

Tulipmania at the Flower Dome in Gardens by the Bay, Singapore

And of course, you can’t miss the iconic Supertree Grove: the tree-like vertical gardens standing 25 to 50-metres tall, designed with large canopies that provide shade in the day and are illuminated at night so that its marvels are always in view.

The Supertree Grove in Singapore

Just under 20-minutes away from the center of town are the Singapore Botanic Gardens, the only tropical garden in the world honored as a UNESCO World Heritage Site. It is 160 years old this year, and if you enjoyed their partnership with The New York Botanical Garden’s The Orchid Show: Singapore, then its National Orchid Garden is a must-see. There are over 1,000 species and 2,000 hybrids on display.

One could spend an entire day here exploring the 203 acres of lush paths and greenery. And we love that it remains open until midnight, which makes many of the gardens like the Fragrant Garden and Ginger Garden come alive as an olfactory experience.

A well-traveled friend offers: “Definitely visit the Imperial Garden in Tokyo – it is very special.” Filled with bamboo and cherry blossoms in springtime, the gardens are on the former site of Edo Castle, the residence of the Tokugawa shogun who ruled Japan from 1603 to 1867. The current Emperor and Japanese Royal Family live in the western part of the grounds, but the Imperial Palace East gardens are open to the public. Plan ahead, though: the gardens are closed every Monday and Friday.

In Kyoto, the dry landscape garden at Ginkaku-ji, or ‘Silver Pavilion’, is enigmatic and striking; it features a platform of sparkling white sand raked into parallel lines, beside which is a 6-ft high cone of sand with a flat top. The pavilion is not actually silver, but an austere black and white (it was the original intention of the shogun who built it to cover it in silver leaf).

Also in Kyoto, Ryoan-ji is one of Japan’s most iconic gardens. Set in a temple, it’s also a dry landscape garden. Created at the end of the sixteenth century as an aid to contemplation for the Rinzai sect of Zen Buddhism, it features five groups of three stones, on a bed of raked gravel. All of the stones, except one, appear to point upstream and all of the stones, except one, are visible from any one viewpoint. The garden has a viewing pavilion that runs its length to foster quiet contemplation.

The “moss garden” of nearby Saiho-ji temple is noted for over 120 different species of moss growing around a large heart-shaped pond.

In Kanazawa lies one of Japan’s most beautiful gardens, Kenroku-en, which was created as the outer garden of a castle over a 200-year period, from the seventeenth to the nineteenth century. Known as “The Garden Displaying Six Qualities” – spaciousness, seclusion, artistic intent, maturity, abundant water and striking vistas – it has been a National Site of Scenic Beauty since 1922.

Bowen Road in Hong Kong is one of best gardens Asia. While not technically a garden, it’s a glorious hidden green space in the middle of a face-paced metropolis. A flat, tree-lined paved path halfway up a mountain, with brilliant views over the central part of the city. We like to run there when we visit, but you can also walk it. Either way, it’s a short trip into different world, surrounded by trees and charming vistas. It’s a little paradise – go in the early morning to experience it at its most magical, when people are practicing Tai Chi, running, walking and otherwise greeting the day.

The View from Bowen Road in Hong Kong

For almost 150 years, the Grand Palace in Bangkok was the residence of the Thai royal family and the administrative seat of the government; its ceremonial gardens and wats (Buddhist monasteries or temples) are now on view, and the architecture is as mesmerizing as the surrounding greenery.

Our Dear Friend in Delhi writes: “Chandigarh in North India is called Garden City; it has a beautiful rose garden, and each home owner is superbly proud of their gardens” (she has a lovely estate of her own, with 4 miles of flowers in front of the main house alone). The Rose Garden, a botanical garden spread over 30 acres, is the largest of its kind in Asia. Started in 1967, the garden has 1,600 varieties of roses and also a wide range of plants of medicinal value.

The building and the garden at the Viceroy’s Palace in New Delhi were designed by Sir Edwin Lutyens, who took direct inspiration from the architectural style of the Mughal emperors. It’s a fascinating way to experience one way in which cultural influences passed between East and West in the early 20th century. The garden covers 13 acres, and it is filled with ornamental fountains (some shaped in the form of giant lotus leaves), gazebos, flowering trees, flowers, and shrubbery. Some residents call it “God’s own Heaven.”

The Garden at the Viceroy’s Palace in New Delhi

Also in the north of India, in Kashmir, is the Shalimar Bagh, a royal garden of the Fifth Mughal emperor (who also commissioned the Taj Mahal). Located on the shore of a lake, the distinctive element of this garden is its ingenious use of water, symbolizing life and refreshment.

For most people, though, it is the emperor’s other garden in India that demands a pilgrimage: the Mughal Garden at the Taj Mahal. It is, without question, one of the best gardens Asia.

The place to stay is the 5-star Amarvilas in Agra, which is part of the Oberoi chain. It has postcard views of the Taj Mahal from every room. The hotel itself is very small, with spectacular gardens. It is also in a very privileged position. The hotel operates its own rickshaws, which ferry guests to the entrance to the Taj Mahal. If you don’t stay at the Amarvilas, then you must walk – and it can feel like a very long walk on a hot, sunny day. Our expert on the matter says that a one-night stay is perfect. This allows you to visit the Taj Mahal, relax afterwards, see the Taj Mahal at sunset the first day and at sunrise the following morning.

The grounds of the Oberoi Amarvilas Agra, India. Courtesy Photos.

While you’re in Agra, you could stop in at the Mehtab Bagh, known as the ‘Moonlight gardens.’ They were constructed as an extension of the Taj Mahal garden. Planted with fragrant flowers, these gardens were intended to be used in the cool of the night as a place to view the memorial.

Come and join our community! For a weekly round-up of insider ideas and information on the world of luxury, sign up for our Dandelion Chandelier newsletter here. And see luxury in a new light.