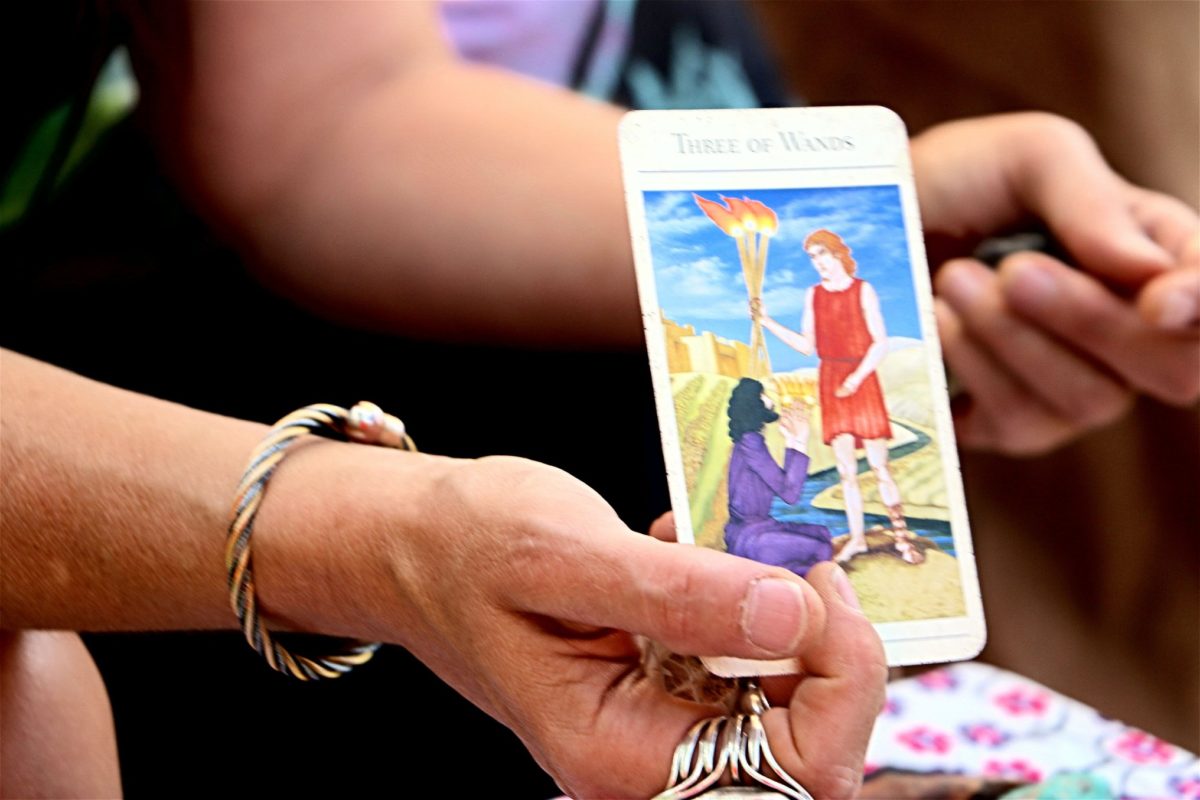 We’ve been exploring metaphysical trends here at Dandelion Chandelier- first crystals, then astrology and now, the mystical and mysterious tarot. Used for centuries by the very wealthy, they’re an intriguing element of luxury life. Not always spoken of, but frequently present in the lives of the elite. How do tarot cards work? Our correspondent Julie Chang Murphy shares what you need to know about tarot cards.

tarot cards are a Thing now

Wealthy elites have relied on metaphysical elements like tarot cards for generations. But they don’t talk about it much. So for most people, ephemera like tarot cards were relegated to the realm of New Age shops, carnivals and that strange lady in the neon-lit storefront window. Fast forward, though, and tarot cards have been fully embraced by the wellness community. How do tarot cards work?  Here’s what you need to know about tarot cards to understand some of the subtleties and nuances of modern luxury.

they’re read and sold in many places

You don’t have to look far to find the presence of tarot cards in luxury wellness spaces. The yoga teacher who also reads cards. The cool Brooklyn hair salon that has tarot readers on the weekends. There seem to be newly illustrated decks every month at my local indie bookstore ranging from the now ubiquitous The Wild Unknown Tarot to the irreverent and humorous for the insouciant types. At GOOP’s online store, tarot cards are listed under the category of Cosmic Wellness. It’s a Thing, dear reader.

they’re more popular than ever

Sales of tarot decks are at an all-time 50 year high, according to US Games Systems, which owns the rights to more than 140 card collections. Still, tarot seems to be the most “dark” of the metaphysical arts. We can get into the crystal thing. So pretty! Astrology is fun and a quick way to make yourself feel better. “My boyfriend has been hot and cold lately. It’s because he’s a Gemini and they’re going through something right now with mercury in retrograde.” But I’ve seen enough television shows and movies where that Death card is flipped over to say “No thanks” when my idiosyncratic friend offers to give me a free reading. Spoiler alert: People die when it makes an appearance!

Yikes. How do tarot cards work? Are they supposed to – gulp – predict my future?

there’s no need to be afraid

For sure, one thing on our list of what you need to know about tarot cards is that you don’t need to fear them. Turns out tarot is nothing to be scared of. If you have the luxury of time and imagination, reading tarot cards for yourself or others is a fun way to exercise your intuition and abandon the screens for a little while.

In our deep dive into this latest occult trend, we’ll explain how tarot cards work and give you a glimpse into some of the beautiful decks out there that are veritable works of art. If you feel compelled to try it out for yourself, instead of game night next weekend, try tarot card reading night!

what you need to know about tarot cards

they originated in Italy

Why would anyone trust a pack of playing cards to tell the future? Tarot cards originated as a parlor game in medieval Italy around the 1400’s. They were picture cards with suits and numbers. And like many of the paintings of the time, the pictures contained allegorical illustrations. As time wore on, the game spread throughout Europe. And with the rise of the occult starting in the 1800’s, the cards became popular as a divination tool due to their symbolic illustrations.

they’re not dissimilar to a Rorschach test

It’s helpful at this point to compare tarot cards to Rorschach ink blot images and other picture interpretation techniques that ask test takers to tell stories about what’s being portrayed in the illustration. Talking about inner experience does not come naturally to many, except for that co-worker. You know the one. Every office has got one.

Often psychologists will use these tools to help people try to describe their feelings objectively. And bring to the surface thoughts that might be relegated to the subconscious for whatever reason. Shame, fear, or simply a blind spot. The pictures are essentially neutral and the patient imbues them with meaning. The desired result is that the person can better understand their motivations, beliefs and inner conflicts.

With cartomancy, the idea is the same. Relying on synchronicity and the reader’s intuition, the cards that are drawn are a mirror into someone’s current situation. And if you can understand the current situation, the future can be seen with more clarity. It’s that simple.

What do all the pictures and suits mean?

Sounds straightforward, right? Except it’s not that simple when you open a package of tarot cards. There are 76 cards in there! Let’s use the most popular deck used today- the Rider-Waite tarot cards, published in 1910, as an example. Its a good way to understand how tarot cards work.

There are 22 cards in the Major Arcana, which in a regular card game like Bridge or Hearts, would be considered the trump cards. They are a combination of royal, celestial, and religious figures and imagery and yes, the infamous Death card. Each archetype from The Fool, The Empress to The Devil represent the major life lessons, karmic influences and the big common themes that are influencing your life and your journey.

All the other 56 cards are known as the Minor Arcana. They have 4 suits: Cups, Pentacles, Swords and Wands. The Cups represent feelings, emotions, intuition and creativity. The Pentacles rule finances, work and material possessions. The Swords represent your thoughts, words and actions. And finally, The Wands govern energy, motivation, passion and purpose. Even though these cards are named ‘minor’, they are far from it. These Tarot cards relate to what is happening in your daily life- the trials and tribulations- and offer insight into the present situation.

how to use the card deck

So what happens now? Does one just shuffle the deck, start dealing them out and check, bet, or raise? How do tarot cards work?

There are some basic recommended spreads to start with. For example, one of them is to ask a question and pick a card from the deck and simply meditate on its meaning and significance for you. There are 3-card spreads which requires the reader to pick 3 cards- left to right, suggesting some sort of linear path, sequence of events, cause and effect, or a way of getting from point A to point B. The most common is past, present and future. But there are more specific ones like you, relationship, partner or idea, process, aspiration.

books to read to help you get started

Of course with 76 cards, it would be pretty difficult to memorize each meaning. In researching this topic, a few beginner guides were repeatedly recommended.

Check out Learning the Tarot: A Tarot Book for Beginners by Joan Bunning. The Ultimate Guide to Tarot: A Beginner’s Guide to the Cards, Spreads, and Revealing the Mystery of the Tarot by Liz Dean. And Mary K. Greer’s 21 Ways to Read a Tarot Card.

One of the key words of wisdom from Liz Dean’s book is to ignore your logical left brain. Resist the urge to quick-reference the meaning of each image. Instead, stay with the image as long as you want to stimulate your intuition. There is no right or wrong interpretation. Just tell a story.

Tarot decks for everyone

What else do you need to know about tarot cards? There’s a perfect deck out there for everyone.

As mentioned before, the Rider-Waite deck is the most well-known. There is no mistaking its archetypal imagery. And the cards are often used as a reference, which makes it easy for beginners to get started.

“Just tell a story,” we are told. Well, to do that effectively, one must find a connection with the cards and its images. I prefer more multicultural representation. Others might have an affinity for animal symbolism. Still others might be drawn to something feminine to tap into their inner goddess.

Here are some of the most philosophically appealing and visually gorgeous decks we’ve come across if you’d like to get started.

If you are searching for something referencing classic medieval motifs, the sumptuous The Golden Tarot is a collage of imagery from the European masters paintings from the Middle Ages to early Renaissance. Other fine art inspired decks include these by Breugel, Bosch, Mucha, and Klimt.

Do the images used in The Motherpeace Tarot, first printed in the 70’s, look familiar? That’s because Vicki Noble and Karen Vogel’s designs of strong female archetypes were used in Dior’s 2018 Resort Collection. Women of color represent more than half of the archetypes. The creators researched the goddess-based cultures of indigenous peoples around the world to make their illustrations. Another girl power deck aptly named The Goddess Tarot features ornately illustrated images of goddesses throughout history and the world: Isis, Lakshmi, Freyja and Venus.

The Linestrider Tarot is a deck of dreamy, yet evocative images by Siolo Thompson that invites openness instead of fear. There are beautifully detailed line drawings of flora and fauna, mixed with splashes of pastel watercolors. Even the Death card escapes from looking ominous; it would look pretty cool on a t-shirt.

If animal imagery speaks to you, The Animal Totem Tarot is a gorgeous choice. Soaring above or swimming below, crawling along the earth or silently stalking in the shadows, animals are perhaps the easiest symbols to use for story telling.

A little bit glam and little bit mysterious with minimalist illustrations, the black tarot cards from The Golden Thread Tarot are printed with gold foil. They come with a companion app featuring guided readings and handy database of meanings. The design of the deck was inspired by the “concept of the night, and the archetype of a single string that connected all things within the universe, threading images in a murky unknown.”

Its sister deck, The Luminous Spirit Tarot , on the other hand, is stark white with simple hand drawings. The cards have an eye-catching prismatic backing to spark the light within us all.

That’s the basics of what you need to know about tarot cards. I don’t know about you, but I’m excited to read for my friends for our next girls night. Thanks for playing along.

Come and join our community! For a weekly round-up of insider ideas and information on the world of luxury, sign up for our Dandelion Chandelier Newsletter here. And see luxury in a new light.