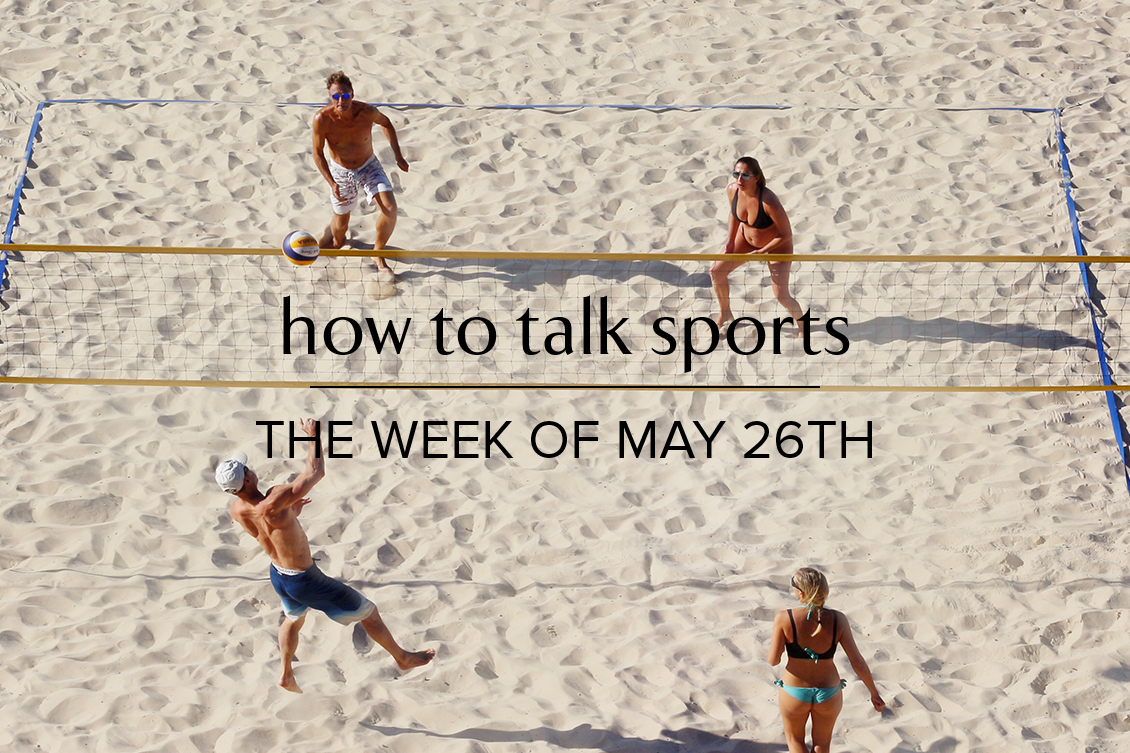 This Week in Sports Talk (TWIST) is our weekly recap to help you learn how to talk about sports right now. If you’re just starting to learn about sports, or want a quick summary of the headlines, or even if you just want to fake a modicum of sports knowledge at work or at the bar, read on. Here’s how to talk to a sports fan the week of May 26, 2019.

First, some short takes on how to talk to a sports fan before you fire up the grill for your Memorial Day barbecue. Interestingly, this week sees lots of Men Behaving Badly. That probably comes as a huge surprise to you. Nevertheless, dear reader, it’s true.

beef on the hardwood

Pop culture fans may already know that Drake, the rapper from Toronto, is a huge Toronto Raptors fan. If you want to leverage your music knowledge as you learn how to talk to a sports fan, this is your moment. Throughout the NBA Eastern Conference finals, he’s been actively involved in several aspects of the games. In addition to trash-talking opponents, Drake gave the Toronto coach a back rub during a recent game. His actions are so over-the-top that some think the NBA will institute a crack-down.

Not content to wait for official action, though, Bucks fans took matters into their own hands. The 20-something daughter of one of the Bucks’ owners wore a shirt with a picture of Pusha T on it to Game 5 (’cause Pusha T and Drake have a huge ongoing beef). Drake responded to her provocation in a frenzy of social media postings, and it was on. Milwaukee radio stations stopped playing Drake’s music.

Game Five of the Eastern Conference Finals of the 2019 NBA Playoffs between the Toronto Raptors and Milwaukee Bucks in Milwaukee, Wisconsin. Photo by Jonathan Daniel/Getty Images

But the Raptors won the Eastern Conference Finals last night in Game 6 – so look out, Warriors. He’s coming for you next.

Roger Federer is playing in the French Open for the first time since 2015.  His first Grand Slam event ever was 20 years ago in the 1999 French Open. There were 128 players in the tournament that year. Federer, who was 17 at the time, is the only one still playing. The odds-makers favor Rafael Nadal to win the French. Meanwhile, Vegas doesn’t even have Serena Williams in the top 5 favored to win. Meanwhile, Nick Kyrgios has pulled out of the tournament. On his way out, he was caught saying “the French Open sucks.” This after he defaulted in a recent match in Italy because he threw a chair across the court.

Roger Federer at the French Open 2019

So much in sports – just like so much in politics – comes down to who’s got it at clutch time. Turns out that Green Bay Packers’ quarterback Aaron Rogers may not. Rodgers was in the stands for Game 5 of the NBA Eastern Conference Finals (sitting next to the provocateur in the Pusha T shirt, no less) when his offensive lineman David Bakhtiari – seated on the opposite side of the court – was caught on camera chugging a beer.

With the TV audience watching, Bakhtiari downed 2 cups of beer in quick succession. Then he pointed to Rogers, challenging him to a drink-off. Rogers went down to an ignominious defeat, halfheartedly sipping about half a cup of beer. The camera then returned to the offensive lineman, who promptly chugged down another one for good measure. Dang, bro. That’s gotta hurt.

Brooks Koepka is a clutch player

On the other hand, in another sport, one man has proven to consistently rise to the occasion. Brooks Koepka has a record of winning Majors,  and is not nearly as focused on regular PGA tournament play. He has 5 tournament wins, of which 3 are Majors. By way of contrast, fellow player Dustin Johnson has 20 wins, but only 1 major. So while Johnson has been the #1 player on the tour for the last 64 weeks, when big money is on the line, it’s Koepka in the clutch.

Now that we’re warmed up, let’s get to the real deal updates this Memorial Day weekend.

For Those Who Do Not Avidly Follow Professional Sports and want to know how to talk sports the week of May 26 2019, here’s what you really need to know.

The Golden State Warriors swept the Western Conference Finals. They went 4-0 against the Portland Trail Blazers, despite the absence of Kevin Durant (KD), who was out with an injury (he got hurt in the 3rd quarter of Game 5 against Houston in the division finals).  The Warriors have now won 6 straight without KD; this is the fifth consecutive year that they’re in the NBA Finals. They’re the first team to achieve that since the 1966 Celtics.

Stephen Curry #30 of the Golden State Warriors dribbles against Damian Lillard #0 of the Portland Trail Blazers in Game 3 of the NBA Western Conference Finals. Photo by Jonathan Ferrey/Getty Images.

In a shocking turn of fortune in the Eastern Conference Finals, the Milwaukee Bucks and their star player Giannis Antetokounmpo (“The Greek Freak”) went down 4-2 versus the Toronto Raptors. The Bucks were up 2-0 but proceeded to lose four in a row. Antetokounmpo had been fighting to establish himself as the best player in the East over Toronto’s Kawhi Leonard. The Greek Freak started out strong, then stumbled. This streak was the first time all year that the Bucks have lost even 3 games in a row. Meanwhile, Leonard caught fire and took the series. This is the first trip to the NBA Finals for the Raptors.

Who will win it all? We say don’t sleep on the Warriors, but Charles Barkley is going with the Raptors. Vegas has the Warriors as huge favorites to win; as of this posting it’s a -310 money line, which is about a 75% chance of winning the title. But the odds-makers have been wrong before – and Toronto has home court advantage in the Finals. Whoever wins, the Raptors get a lot of credit for taking a huge risk trading for Kawhi Leonard when he had only one year left on his contract. As a free agent, he can leave Toronto after the finals. Will making the Finals (and maybe winning title) be enough to get him to stay?

Meanwhile, there is heartache in Milwaukee, as the Bucks are only the third team in NBA history to win 60 games, then lose 4 straight after winning the first 2 games of a playoff series. It’s like watching a car just run out of gas.

Kawhi Leonard of the Toronto Raptors

The 2018-19 All-NBA Teams were announced this week. They’re selected by a global panel of sportswriters and broadcasters. And as usual, there was some controversy. The First Team is Steph Curry, James Harden, Paul George, Nikola Jokić and Giannis Antetokounmpo. The Second Team is Kyrie Irving, Kawhi Leonard, Damian Lillard, Kevin Durant, and Joel Embiid. And the Third Team is LeBron James, Russell Westbrook, Rudy Gobert, Blake Griffin, and Kemba Walker.

The controversies? Steph Curry made the first team and Kevin Durant is only on the second team? Many would say that KD outplayed Curry in the post-season before his injury sidelined him. LeBron James, perhaps the Greatest of All Time, is on the third team? And a couple of stars from the Golden State Warriors are not on the list at all: what about Klay Thompson and Draymond Green?

This isn’t just an academic discussion: being named to the All-Star team has contract implications for the players. Their collective bargaining agreement ties compensation to these achievements, so his lack of inclusion on the list has probably cost Klay Thompson $30 million in his next contract. Ouch,

This week in Major League Baseball, if you want to know how to talk to a sports fan, it’s really simple. It’s all about the New York Yankees. The pinstripes are now in first place in the AL East by two games. As recently as April 12th, they were 5 – 8. They had already lost Giancarlo Stanton and Gary Sanchez, and were about to lose Aaron Judge.

Fast forward, and as of this posting, Stanton and Judge are still out. But Sanchez is back, and is “hot as a pistol” according to our Sports Desk. Even with their battered squad, the Yanks are atop the AL East and have the second-best record in baseball this season, trailing the Houston Astros by only one game. They swept the Kansas City Royals in a doubleheader last night, making this the best 35-game stretch for the Yankees since 2009. They’ve won 9 of their last 10 games. And that’s without a lot of their stars not even on the field.

The team’s bench strength is pretty impressive. The cynical among us are saying that when the stars come back, the Yanks will probably win less frequently . . . For now, let’s just bask in the glow.

Meanwhile, the World Champion Boston Red Sox lost this weekend, and are currently 7.5 games behind the Yanks. That London game in June is looking even more interesting now.

From the True Story files comes this: the very day after New York Mets second baseman Robinson Cano was heavily criticized for not hustling out of the batter’s box ( he has a history of lacking hustle when running to first), he hurts his quad. By running to first.

Even though the primary focus is on baseball and basketball, part of knowing how to talk to a sports fan means knowing that there’s always something going on in the NFL.

New York Jets Head Coach and interim General Manager Adam Gase says he is keeping Le’Veon Bell. Gass said this week that while he doesn’t like how much the team paid to get Bell in free agency, he has no plans to trade him. The rumors were that Gase was unhappy, and that with the abrupt departure of Mike Maccagnan as General Manager, Gase would be free to trade Bell.

The injuries have started at the NFL’s Organized Team Activities (OTA’s) ahead of training camp. San Francisco 49’ers defensive end Nick Bosa is dealing with a Grade 1 hamstring strain and may be out until the start of training camp. The 49’ers safety Jimmie Ward suffered a broken collarbone while diving for a ball during Thursday’s OTA practice. He’ll definitely be out until training camp begins.

Dallas Cowboys running back Ezekiel “Zeke” Elliot is in the news again. The player was involved in a scuffle with the event staff at the Electric Daisy Carnival in Las Vegas. He was cuffed and detained, but not arrested, at the music festival in the early hours last Sunday. Zeke is one of those players who just seem find trouble. He’s on the brink of signing a huge new contract with the Cowboys. And while team owner Jerry Jones says the incident won’t affect his stranding, our Sports Desk has some sage advice: when you have a big contract negotiation coming up, maybe just stay home, bro.

Last but not least in our rundown on  how to talk sports the week of May 26, 2019 , in the NHL the St. Louis Blues beat the San Jose Sharks. So this year’s Stanley Cup Finals will be the St. Louis Blues versus the Boston Bruins.  It’s a repeat of the 1970 Stanley Cup, which is also the last time the Blues were in the Stanley Cup Finals. That’s one of the longest “pauses” in major sports history. Welcome back, dudes!