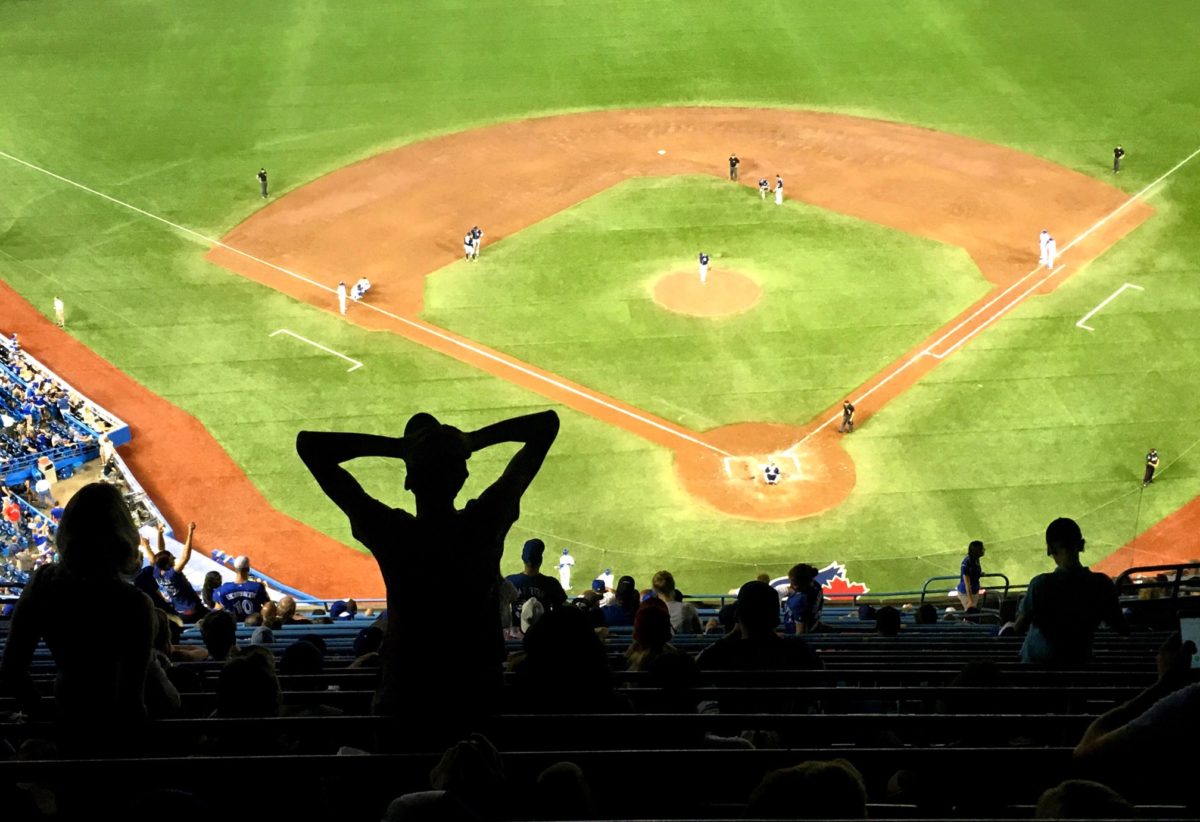 a new crop of books about baseball

America’s National Pastime is endlessly interesting for fans – the history of baseball, the techniques, the personalities, the epic rivalries, the scandals and the legendary plays have all been topics of shelves full of non-fiction books. Some of these accounts settle old scores, while others shine a light on little-known episodes on and off the field.

The good news? Many of these are great reads even if you don’t care much about baseball. The Wall Street Journal notes that legendary writer and sportsman George Plimpton once said, “when it comes to sports writing, the smaller the ball, the more formidable the literature.” Meaning that after golf (and maybe tennis?) some of the best sports writing in history is focused on the game of baseball.

Crack the covers on any of these new books, and you’ll find true stories that cut to the heart of issues that are still painfully relevant today: class, race, gender, the challenges of aging gracefully, the grit necessary to overcome low expectations. You’ll also find inspiration and uplift. There are tales of the joy of being part of a team. The euphoria of beating the odds. The lasting pleasures of friendship.

Dip into one of these as part of your summer reading, and you might be pleasantly surprised. And if you’re looking for a gift for a die-hard baseball fan, look no further than this list.

the best new books about baseball

In both quantity and quality, this year’s crop of books about baseball is exceptional. A number of the new books this season focus on the 50th anniversary of the Mets’ miraculous 1969 World Series win.

Here’s our roundup of the best new books about baseball right now.

Ten Innings at Wrigley by Kevin Cook. Written by a former editor at Sports Illustrated, this is the story of a wild baseball game played between the Chicago Cubs and the Philadelphia Phillies. The date? May 17, 1979. The location? Wrigley Field, the Cubs’ hometown stadium. It started a bit slowly – but by the end of the fifth inning, the score was 21-16. Because it was early in the season, the stakes weren’t terribly high. But this is an entertaining recounting of a game in which one pitcher after another leaves the mound, the game goes into extra innings, and we become immersed in life in the summer of ’79, warts and all.

Let’s Play Two: The Legend of Mr. Cub, the Life of Ernie Banks by Ron Rapoport. Sportswriter Rapoport has written a biography of lesser-known Chicago Cubs shortstop Ernie Banks. He was a first-ballot Hall of Famer and All-Century Team shortstop, played in fourteen All-Star Games, won two MVPs, and twice led the Major Leagues in home runs and runs batted in. He outslugged Willie Mays, Hank Aaron, and Mickey Mantle when they were in their prime. But Banks spent his entire career with the Chicago Cubs, who didn’t win a pennant in his adult lifetime.

Today he is remembered for his signature phrase, “Let’s play two,” exemplifying his enthusiasm for the game. But his public display of good cheer masked conflict, melancholy, and loneliness. Despite years in the Negro Leagues, he was reluctant to speak out about the Civil Rights movement. And he never shook his disappointment at being one of the greatest players never to reach the World Series. This poignant chapter from a long-lost era still has lessons for us today.

K: A History of Baseball in Ten Pitches by Tyler Kepner. Penned by the New York Times National Baseball columnist, this is a history of Major League Baseball told through the craft of pitching. Kepner makes a passionate case that the best aces are innovators – even the slightest calibration can turn an ordinary pitch into a weapon to foil a great hitter. Here, we learn about the origins of the ten major pitches. Each chapter is dedicated to a different pitch: the fastball; the knuckleball; the spitball. We even learn about Candy Cummings, inventor of the curveball. Kepner interviewed more than three hundred people for this book, including 22 Hall of Famers.

Full Count: The Education of a Pitcher by David Cone with contributions from Jack Curry. If “K” provides a macro view of pitching in the Major Leagues, this book is a complementary micro view, as told by Met and Yankee All-Star pitcher Cone. He had a 17-year career and was a five-time All-Star and five-time World Champion. The ace shares the lessons he learned and the experiences he had at the very top of his profession. If you want to understand the allure of this sport, this is a good place to start.

108 Stitches: Loose Threads, Ripping Yarns, and the Darndest Characters from My Time in the Game by Ron Darling. Writer and broadcaster Darling shares 108 baseball anecdotes that span his career. The book proved to be explosive when it was published this spring. In it, Darling claims that outfielder Lenny “Nails” Dykstra ranted obscenities and racial comments at Boston’s Dennis “Oil Can” Boyd in the 1986 World Series. Darling says the remarks were “worse than anything Jackie Robinson heard.”

In response, Boyd said he never heard anything, but he does think Dykstra was capable of making such comments. By making this claim 30+years after the fact, Darling angered a number of former players. None of them would back up the claim – in fact, Darryl Strawberry, Dwight “Doc” Gooden and others stated that they never heard anything close to this uttered by Dykstra. Also, Dykstra is in dire straights: bankrupt and formerly incarcerated. So it feels like Darling is kicking a guy when he’s down. As of this posting, Dykstra is suing Darling. So now you know the backstory of the book, and you can make your own call about whether or not to add it to your shelf.

Inside the Empire: The True Power Behind the New York Yankees by Bob Klapisch and Paul Solotaroff. Using the 2018 baseball season as the backdrop, two journalists promise a “straight-from-the-gut” set of truths and insights into the inner workings of the best-funded team in baseball. Brian Cashman, Aaron Boone, Giancarlo Stanton, C.C. Sabathia—they’re all here. It’s a fascinating depiction of a general manager’s daily life, and a peek into the drama of a season with the Bronx Bombers.

They Said It Couldn’t Be Done: The ’69 Mets, New York City, and the Most Astounding Season in Baseball History by Wayne Coffey. Going into the 1969 season, the odds that the New York Mets would win the World Series were 100-1. By the end of the season, they were known as the Miracle Mets. The bestselling author of The Boys of Winter tells how they did it.

Young and untested, it turned out the ’69 Mets had the best pitching staff in baseball, including future Hall of Fame and Cy Young-winning ace Tom Seaver. Other notables included Nolan Ryan and Cleon Jones. The team manager, Gil Hodges, brilliantly put his part-time players to work. And he was unyielding in demanding the best from his players (he famously took his star left fielder, Jones, out of a game because he made a low-energy play). Under his leadership, the team reached the World Series and defeated the best-in-a-generation Baltimore Orioles.

After the Miracle: The Lasting Brotherhood of the ’69 Mets by Art Shamsky and Erik Sherman tells the same story through a different lens. Right fielder Shamsky was one of the ’69 Mets. He confronts head-on the racism and abuse that black players faced in the sport. And his perspective casts a different light on the episode in which Hodges took Cleon Jones out of that game. Jones is black – and Hodges played his ejection from the game for maximum drama – and maximum humiliation of Jones. The book ends with a tender and funny reunion of some of the aging members of the Miracle Mets team of ’69. Ailing, wheelchair-bound, but still full of life, it’s totally clear why this particular gang exceeded all expectations.

Here’s the Catch: A Memoir of the Miracle Mets and More by Ron Swoboda. Right fielder Swoboda was also a ’69 Met, and it turns out that he’s both a great athlete and a talented writer. He’s honest about how he was perceived by some as mediocre (he noted that the Mets bullpen coach once told him “Don’t think. You will only hurt the team.”).

Ultimately, though, he made one of the greatest catches in Mets history, saving a game in the ‘69 World Series. And his run-batted-in (RBI) clinched the final game. The stories of how Swoboda rose above low expectations – as well as his anecdotes about his friendship with teammate Tug McGraw, and of his love for his wife – make for a touching and poignant read about one man’s life in baseball.

Ballpark: Baseball in the American City by Paul Goldberger. Rounding out our list is a look at the history of baseball told through the stories of the glorious ballparks where the game was and is played. Some of our dearest childhood memories are from baseball games as a family at Tiger Stadium, so we know how meaningful and influential a great ball field can be.

Pulitzer Prize-winning architectural critic Goldberger reminds us of the iconic role that ballparks play in the life of a city and its residents. In the changing locations and architecture of our ballparks, he persuasively demonstrates how they manifest changes in society. The earliest ballparks had bleachers for the “riffraff” and grandstands for the middle-class. In the 1950’s and ‘60’s the “concrete doughnut” architecture demonstrated television’s grip on the public, with many fewer people actually watching the games in person. Newer stadiums like Baltimore’s Camden Yards signaled baseball’s vital role in urban development. After reading this, you’ll never look at a Major League baseball stadium quite the same way again.

That’s it! Our picks of the best new books about baseball. What’s on your summer reading list?