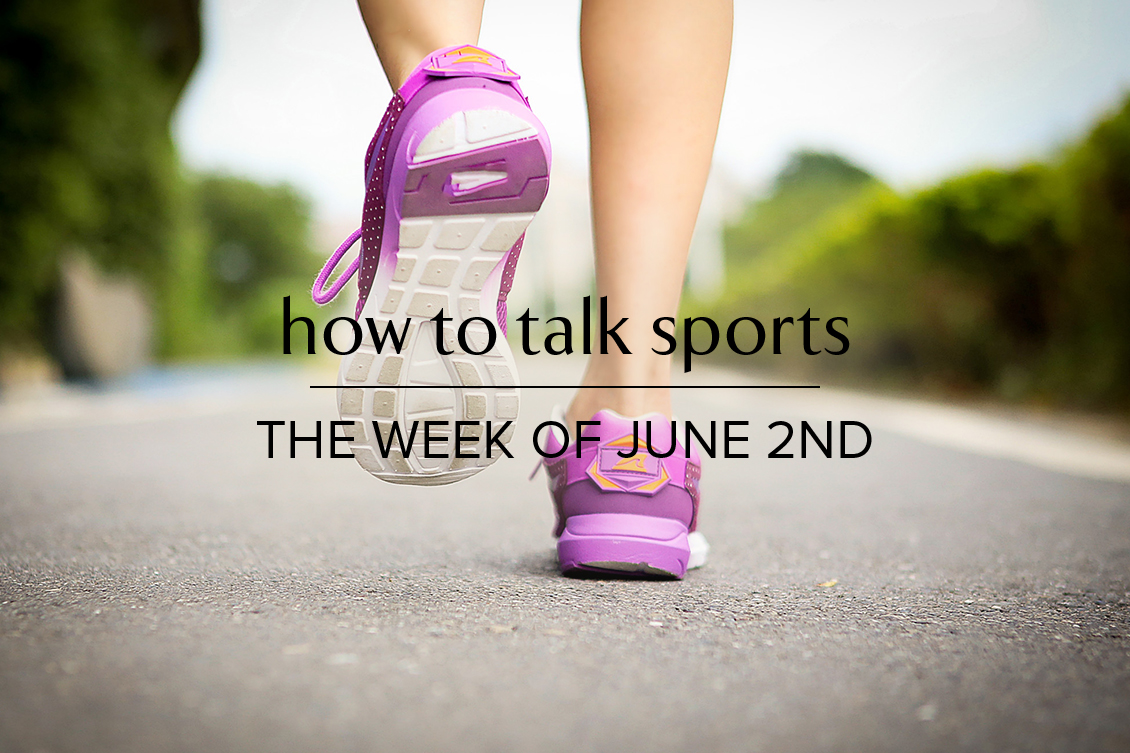 This Week in Sports Talk (TWIST) is our weekly recap to help you learn how to talk about sports right now. If you’re just starting to learn about sports, or want a quick summary of the headlines, or even if you just want to fake a modicum of sports knowledge at work or at the bar, read on. Here’s how to talk to a sports fan the week of June 2, 2019.

For our warm-up this morning, here are some short takes on how to talk to a sports fan right now.

It wouldn’t be Paris without talk of fashion, and that’s true even of the French Open. In a repeat of last year’s tournament, the early talk of the week was Serena Williams’ competition apparel. In 2018, the “catsuit” that she wore drew frowns from the French Tennis Federation. This year, she  wore a custom performance outfit by Off-White and Louis Vuitton Menswear designer Virgil Abloh. The black and white two-piece ensemble with a matching cape was printed with the French words for “Mother, Champion, Queen, Goddess.”

Sadly for Serena’s fans, though, she lost yesterday to fellow American Sofia Kenin 6-2, 7-5. In another shocking upset, Katerina Siniakova defeated Naomi Osaka 6-4, 6-2. As of this posting, of the 32 seeds in Paris, 23 have been eliminated or have withdrawn before the fourth round. Having said that, last year’s finalists, Simona Halep and Sloane Stephens, are still in as of this posting.

On the men’s side, Roger Federer and Rafael Nadal are safely through to the fourth round for a record 14th time. Federer, the French Open champion in 2009, also became the oldest person to reach this stage of a Grand Slam since Jimmy Connors at the US Open in 1991. That sets the stage for a possible Federer v. Nadal semi-final, which would be a huge fan favorite.

Roger Federer at the French Open 2019

To celebrate his recent signing with the Cleveland Browns, NFL wide receiver Odell Beckham Jr (OBJ) purchased a customized Rolls-Royce Cullinan. Making its debut on social media this week, the world was transfixed by the new SUV, which features a Cleveland Browns-themed Dawg Pound Orange wrap.

OBJ’s new ride has a long list of modifications. The most notable?  The traditional Rolls Spirit of Ecstasy hood ornament has been replaced with a custom figurine of Beckham making the play widely considered one of the greatest catches in all of NFL history. Although OBJ made the catch when he was a rookie with the New York Giants, the figurine sports a Browns jersey.

And for those who need to know how to talk to a sports fan who loves soccer, in yesterday’s Champions League Final, Liverpool defeated Tottenham Hotspur, 2-0, for the title. It’s their sixth-time win, making them the third most-winning team in the Premier League, after Real Madrid and Milan.

Head in the game now? Then let’s get to the heart of the matter.

For Those Who Do Not Avidly Follow Professional Sports and want to know how to talk sports the week of June 2, 2019, here’s what you need to know.

In a surprise – at least to some – the Toronto Raptors won Game 1 of the NBA Finals over the defending champion Golden State Warriors. It was the first NBA finals game ever played outside the US, as this is Toronto’s first time in the finals. Raptors star Kawhi Leonard played well. But the real surprise in Game 1 was the Raptors’ Pascal Siakam. He’s not a household name in America, but the 3rd year player is a fan favorite in Canada. The native of Cameroon scored a playoff career-best 32 points and sank 14-of-17 shots from the floor.

The consensus is that this is shaping up to be a good series. Most experts had picked the Warriors to win in 5 or 6 games. It just might get interesting.

If Toronto native and rap star Drake has his way, it’ll definitely get interesting. And stay that way. At the end of Game 1, Drake and Warriors forward Draymond Green mixed it up verbally as Green was walking off the court. The #Drakemond episode captivated fans. But it appears to be much ado about . . . not much.

The two have a long history of mutual respect – mixed with a lot of trash-talking, especially about fashion. As press reports note, in 2016, during the Warriors’ record-breaking 73-win season, Drake name-dropped Green in his hit single, “Summer Sixteen.” Two years ago, following a 127-121 Warriors win over the Raptors, Green was treated to an advance listen to “Free Smoke” from Drake’s then-upcoming mixtape “More Life.” Last season, as the Warriors geared up for a playoff run, Green wore a promotional jacket for Drake’s fifth studio album, “Scorpion.”

The two were spotted having a friendly drink with others in a group in the private lounge of Toronto’s Cactus Club Cafe on Friday evening. Peace out, y’all. Game 2 is tonight in Toronto.

The Golden State Warriors have entered the finals without one of their star players. Kevin Durant (KD) is still recovering from an injury, although although DeMarcus “Boogie” Cousins was back for Game One.  KD has not been seen practicing, so most people think that he will not play for the rest of the series. But that remains to be seen, of course. The Warriors may need him to win.

This week in Major League Baseball, if you want to know how to talk to a sports fan, it’s still all about the New York Yankees. They’re playing their long-time nemesis the Boston Red Sox in a three-game series in the Bronx. And so far, they’re dominating.

On Friday night the Yankees won, 4-1. Last night, they won again, 5-3. The play of the night was when Gary Sánchez hit a tie-breaking two-run one-handed homer.

The Red Sox are now nine and a half games behind the Yanks in the American League East (the Tampa Bay Rays are two and half back). The Yankees have won 15 of 18, and the Sox have lost their last 4. If the Yankees win this afternoon, the Sox may end up in a hole they won’t be able to get out of. That London game at the end of this month is looking even more interesting now.

The real story, though, is not this epic rivalry. It’s the remarkable success of the Yankees who have replaced the injured super-star players this season. Miguel Andujar, Aaron Judge, Giancarlo Stanton, Didi Gregorius, Luis Severino and Dellin Betances, among others, are all on the disabled list. But a roster of younger players has the team on a winning streak, anyway. The Yankees’ team stores now sell “Next Man Up” T-shirts, and they’re flying out the door.

This season for the New York Yankees, it’s all about the Next Man Up

In the National League, the LA Dodgers continue to roll; they beat the New York Mets in 3 out of 4 games this week. They sit atop the NL West, nine games ahead of the Colorado Rockies.

22-year MLB veteran Bill Buckner passed away at 69 this week, after a long illness. With a record of 2,715 career hits, Buckner is best known for his infamous fielding error playing for the Boston Red Sox in the 1896 World Series. It happened in Game 6 against the New York Mets, who went on to win that game and then Game 7 (where the Sox also had a lead). Red Sox Nation blamed Buckner for denying them a championship and continuing “The Curse of the Bambino.”  Many felt Buckner was unjustly blamed – but fans didn’t truly forgive him until they finally won the pennant in 2004.

The St. Louis Blues lost the first game of the Stanley Cup Finals.  At that point they were 0 – 5 in the last 5 Stanley Cup games in their history, all against the Boston Bruins.

The city of St. Louis has had a reasonably bad run historically in competition with Boston. Our Sports Desk notes the following:

That is a whole heap of bad karma. But it’s not over yet, at least for this Stanley Cup Final. The Blues won the second game of the Finals in Boston in overtime to tie it up 1 – 1. The series then headed to St. Louis, with the Blues having wrested home ice advantage from the Bruins. But last night, the Bruins blew out the Blues in Game 3, 7-2, taking a 2-1 lead in the series.

Brad Marchand #63 of the Boston Bruins battles for the puck with Carl Gunnarsson #4 of the St. Louis Blues in Game Two. Photo by Adam Glanzman/Getty Images.

At last night’s game, Kansas City Chiefs quarterback and NFL MVP Patrick Mahomes was in the stands, chugging beer and supporting his fellow Missouri team. His Chiefs teammate Travis Kelce was there, too. We love this display of support and camaraderie across teams in the same city. We’ll note that Boston got there first, with the Pats players showing up for the Sox, the Celts and the Bruins. While Kansas City and St. Louis clearly aren’t the same city, so this is a bit of a stretch, we’ll celebrate any show of civility and friendship that we can find at this point.

Patrick Mahomes at Game 3 of the Stanley Cup Finals 2019

The Organized Team Activities (OTA’s) continue in the NFL, and the story of the week is that Odell Beckham Jr. (OBJ) – new to the Cleveland Browns – and the New York Jets’ new running back Le’Veon Bell are both still missing from their team’s voluntary OTA’s. It’s not viewed as a great way to start as a new member of the team.

In other NFL news, Hall of Fame quarterback and Super Bowl MVP Bart Starr, formerly of the Green Bay Packers, passed away at 85 this week.