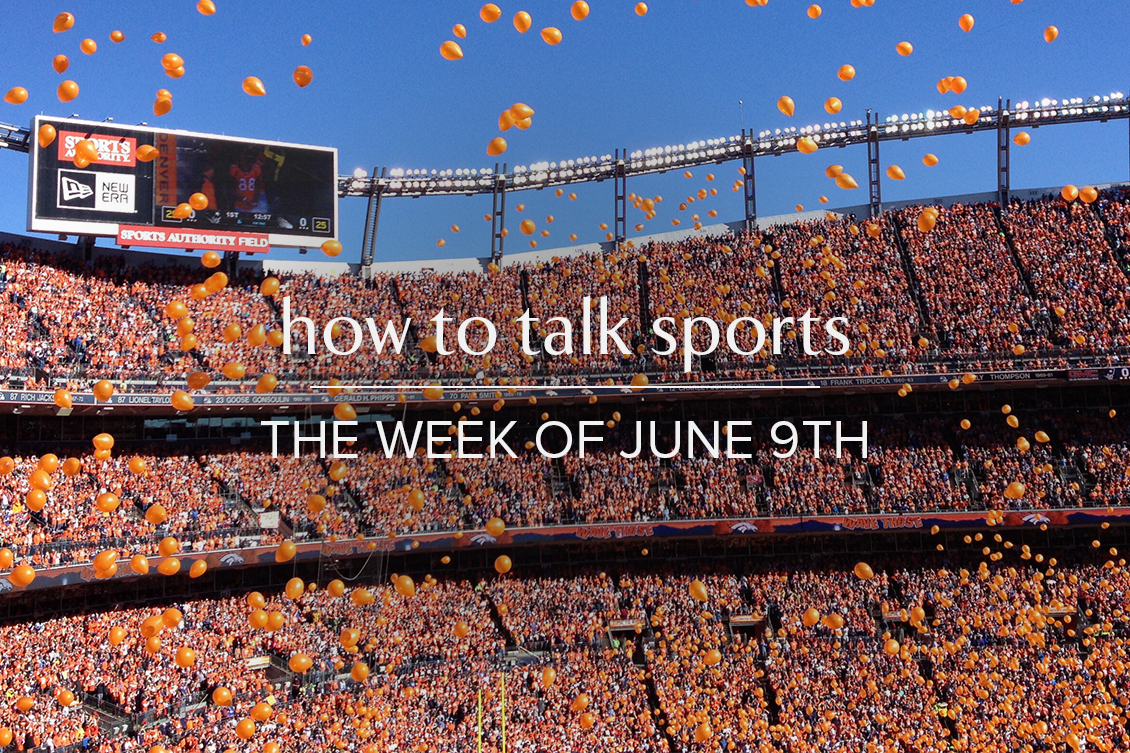 This Week in Sports Talk (TWIST) is our weekly recap to help you learn how to talk about sports right now. If you’re just starting to learn about sports, here’s how to talk to a sports fan the week of June 9, 2019.

Here are some short takes on how to talk to a sports fan right now.

This year’s French Open has been full of surprises and upsets. The latest is that world number one Novak Djokovic lost in the semi-finals to Dominic Thiem. Severe winds made for a tough time – Djokovic said he felt like it was “hurricane conditions.” The match was stopped due to bad weather three times.

With Roger Federer out after his semifinal loss to 11-time champion Rafael Nadal, which also happened in the midst of a windstorm, the finals are now set. Theim and Nadal meet in the final today.

On the women’s side, with Serena Williams out, there’s been less fan interest and press coverage. yesterday, Australian Ashleigh Barty beat Czech teenager Marketa Vondrousova in the final to win her first Grand Slam singles title. Barty quit tennis to play professional cricket in 2014, but returned to the sport 17 months later.

The FIFA Women’s World Cup is underway, with defending champions the US and host country France the two favorites heading into the tournament. France easily won their opening match against South Korea, 4-0. Germany defeated China 1-0 yesterday, and Norway beat Nigeria 3-0.

The US plays its first match on June 11, following a dispute with the soccer federation over pay equity with the men’s team. Despite winning the world championship four years ago, the women’s team makes significantly less than its male counterpart. Overall, the 2019 Women’s World Cup prize purse is $30 million – only 7.5% of the Men’s World Cup prize.

The final leg of the Triple Crown was yesterday at Belmont. There was not the usual level of buzz, with no chance for a Triple crown winner. The winner was Sir Winston, who made a late surge and withstood a late push from betting favorite Tacitus.

For Those Who Do Not Avidly Follow Professional Sports and want to know how to talk sports the week of June 9, 2019, here’s what you need to know.

In a shocking series of surprises – at least for some – the Toronto Raptors won Game 4 of the NBA Finals over the defending champion Golden State Warriors. At home. Wut???? This is Toronto’s first time in the finals, and they’re one game away from winning it all.  They could close it out at home tomorrow night.

Raptors stars Kawhi Leonard and Pascal Siakam and rookie coach Nick Nurse have stunned almost everyone in this series. Most experts had picked the Warriors to win in 5 or 6 games. Now the odds are against the Warriors – the last time a team was down 3-1 and came back to win it all was when LeBron James and the Cleveland Cavaliers did it in 2016 versus the Warriors.

The Warriors have been saddled with injuries: Klay Thompson was out for game 3 and Kevin Durant hasn’t played since the Conference series. Steph Curry and the remaining supporting cast haven’t been able to overcome those deficits. Meanwhile, the Raptors have been playing brilliantly.

These NBA Finals have seen some odd/bad behavior from the stands. First it was rapper Drake trash-talking the Bucks players in the Eastern Conference finals. This week Mark Stevens, one of the co-owners of the Warriors was fined $500,000 and banned from the arena for one year.

Why? The Raptors’ Kyle Lowry fell into the first row of the stands going after a ball.  He landed in the vicinity of Stevens and his wife. Stevens reached over and shoved Lowry, totally unprovoked, and apparently said “Go f- yourself”. Lowry immediately complained to the refs, but nothing happened until after the game.

LeBron James chimed in, saying “There’s no place for this.” Lowry said “this guy should be banned for life from NBA games.” But wait – there’s more.

Stevens’ wife, wearing golden boots, was seated next to Beyonce and Jay-Z. She was filmed leaning across Bey and saying something to Jay-Z.  Bey looked irritated in response. Cue The Bey Hive, which went after Stevens’ wife. She was deleted on social media and even received death threats. In response, she said she was just offering the couple a drink and asking if Jay wanted ice. No comment from Mr. and Mrs. Carter on all of this.

A key question for Game 5 is whether Kevin Durant (KD) will play. Word is that he tried to practice on Friday and couldn’t do it.  KD has long been rumored to be looking for an exit from the Warriors so that he can get out from under the shadow of Curry and build a dynasty of his own. A loss without him on the court fits that narrative. If the Warriors can’t win this series without him, his legend only grows stronger.

The New York Yankees ended a 3-game losing streak Friday, and as of this posting they are tied for first in the AL East with the Tampa Bay Rays. In a demonstration of how quickly things can change, just a week ago the Yanks had a 9.5 game lead on Boston. Now its down to 6.  We’re not yet at the halfway point of the season and there are a lot of games still to play.

Left-hander and 2015 American League Cy Young Award winner Dallas Keuchel has signed a one-year deal with the Atlanta Braves. Apparently, Keuchel passed on the Yankees, who are looking to sign or trade for  a starting pitcher before the trading deadline. Reports are that the Yankees are eyeing Max Scherzer from the Washington Nationals if their season continues to tank. And also Madison Bumgarner from the San Francisco Giants.

In the NL West, the LA Dodgers are 10 games ahead of the second-place Colorado Rockies. In the NL East, the Phillies and the Braves are only a couple of games apart. The Twins and the Astros lead the AL Central and West by comfortable margins, respectively.

The St. Louis Blues won in Boston to take a 3-2 lead in the Stanley Cup over the Bruins.

Bruins fans are up in arms over two, in their view, disastrous calls by refs.  One was a reversal of a goal by the Bruins. The second was an obvious tripping penalty against the Blues that was not called.  The Bruins player who was tripped left the game with a concussion.

Word is that Le’Veon Bell looked good in his first practice with the New York Jets. And Odell Beckham Junior (OBJ) was said to look pretty good in practice with his new team, as well. This week at training camp, OBJ said he has to “get used to a quarterback with an arm.” in a parting shot at New York Giants quarterback Eli Manning. Cleveland Browns fans are definitely excited. And not just about OBJ’s new orange car.

The Philadelphia Eagles’ Carson Wentz has agreed to a  contract extension for 4 years at  $128 million, with $107 million guaranteed. Wow.

Commissioner Roger Goodell says 4 preseasons games are not necessary and that two should be cut. But that might be his angle to move from 16 to 18 regular season games (which would of course mean more revenue for the NFL).

The New York Jets have named Joe Douglas their new general manager, three weeks after the abrupt dismissal of their prior GM. Douglas has prior ties to head coach Adam Gase, who was rumored to be the reason the prior GM was let go.

Thursday night the New England Patriots had a party to distribute all of their Super Bowl rings. Each ring has the player’s name and the phrase “Still here.”  Tom Brady, unlike Green Bay Packers quarterback Aaron Rogers, beat his offensive lineman in a beer chugging contest. We have his victory on tape. Josh Gordon got his Super Bowl ring. And rumors are swirling again that Rob “Gronk” Gronkowski will come out of retirement and play for the Pats again this year.

Tom Brady has filed to trademark the name “Tom Terrific.” That has sent New York Met fans into a lather, as they believe the original “Tom Terrific” is the ailing Tom Seaver, who lead them to an improbable World Series win in 1969. The whole dust-up seems to be a misunderstanding. Brady says he is trying to trademark the moniker so that nobody would use it to refer to him, as he hates the nickname.