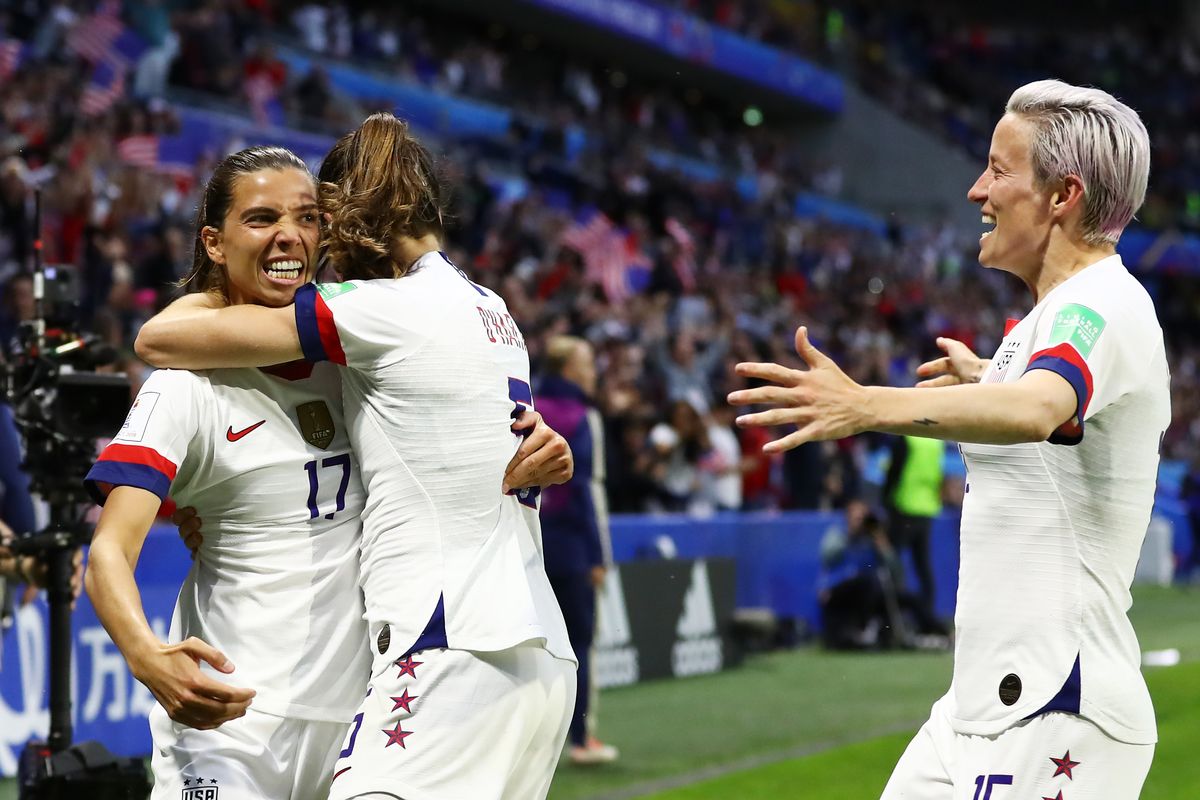 This Week in Sports Talk (TWIST) is our weekly recap to help you learn how to talk about sports right now. If you’re a novice, or just want a summary of the big headlines and coming attractions this week in sports, here’s what you need to know the week of June 23, 2019.

The FIFA Women’s World Cup is underway, with defending champions the US and host country France the two favorites heading into the tournament.

On Thursday, defending champions Team USA won a comfortable 2-0 victory against Sweden. The team is now three wins away from facing France in the quarterfinals, without ever giving up a goal. The victory is particularly sweet, since Sweden knocked out the US at the quarterfinal stage of the Rio Olympics three years ago. It was the US’s worst showing in a major tournament to date – now the score has been settled.

This week, Team USA will face Spain in the Round of 16.

If you want to go deeper on the mash-up of sports and popular culture, have a look at this great read in the New York Times, about how the FIFA women’s players think about their makeup and their hair styles when they’re on the field. These women are inspiring on many levels.

The NHL draft was held yesterday in Vancouver, and 217 players have a new team. The New Jersey Devils made a trade for P.K. Subban as the draft was underway. The Devils and the New York Rangers had the 1st and 2nd picks respectively. The Devils drafted forward Jack Hughes, and with two moves in 16 hours, they’ve transformed their prospects for the upcoming season. The Rangers took right winger Kaapo Kakko. And the sports press declared: “The Devils-Rangers rivalry is back on!”

Jack Hughes is the number 1 draft pick in the NHL for 2019. Photo Credit: AP

Daniel Jones, the first round NFL draft pick quarterback for the New York Giants, was booed at the New York Yankees game. In the immortal words of Taylor Swift: Welcome to New York!

Major League Baseball is one of the underwriters for a new Broadway show about Toni Stone, the first woman of any race to play in a professional baseball game. Stone played two seasons for the Indianapolis Clowns in the Negro Leagues  beginning in 1953. Critics are raving about the performance of April Matthis in the lead role – you can catch Toni Stone at the Laura Pels Theater.

NBA player Marvin Bagley of the Sacramento Kings challenged Portland Trail Blazers star Damian Lillard to a rap battle during an appearance this week on ESPN’s First Take. Bagley dropped a track early Thursday, which didn’t initially attract much attention. Then Dame responded with this 2-minute diss track. And the crowd went wild, declaring him unquestionably the best rapper in the NBA. We gotta say, the man has mad skills.

For Those Who Do Not Avidly Follow Professional Sports and want to know how to talk sports the week of June 23, 2019, here’s what you need to know.

The NBA Draft was held on Thursday, and the top three picks went as expected. With their No. 1 overall pick, the New Orleans Pelicans selected Zion Williamson, the star player from Duke and one of the most exciting prospects to enter the league in several years. The Memphis Grizzlies took Ja Morant with the No. 2 pick. And the New York Knicks chose R.J. Barrett, also from Duke, with their No. 3 pick.

Zion-Williamson is the No 1 pick in the 2019 NBA Draft. Photo Credit: UPI.

In an interview after he was picked Number 1, Williamson teared up and said he owed it all to his mother, who “sacrificed her dreams for me.” Nice.

In less happy news, the young player is embroiled in a $100 million lawsuit in federal and state court. Two weeks ago, Williamson sued marketing agency Prime Sports, declaring an April agreement with them null and void. He’s being represented by CAA now. But Prime Sports has counter-sued both the player and his new agents. Ugh.

Fans of the New York Knicks seem happy with the R.J. Barrett pick at No. 3. They note that there are several stellar players who are former #3 picks, including Kevin McHale, Dominique Wilkins, Grant Hill, and James Harden. And of course, the G.O.A.T., Michael Jordan.

In other NBA draft news, Rui Hachimura was selected No. 9, making him the first Japanese player to go in the first round.

In the aftermath of the NBA Finals, Steph Curry congratulated Kawhi Leonard on his big victory. Love that. Now the conversation moves to where Leonard will be playing next season.

Warriors’ management clearly feels remorse about Kevin Durant’s injury. There’s a $31 million option in place for next season. Now comes word that the team is considering extending him a “max deal,” and then trading him so he can max on salary. Unlike in football, which is even more likely to result in player injuries, in the NBA injured players still get paid, even if they cannot play.

Meanwhile, in Houston there are reports of massive dysfunction between the Rockets’ James Harden and Chris Paul – aka CP3. Reports are that the two didn’t speak to each other for 2 months, with one saying that the relationship is “unsalvageable.” Apparently the combination of CP3’s declining skills and his “grating personality” are causing friction. What happens next? Will the Rockets trade CP3 this off-season? Stay tuned.

Cineastes take note: Space Jam 2 is in the planning stages, and the players to be featured include Damian “Dame” Lillard, Anthony Davis, and Klay Thompson. We doubt they can fill Shaq’s shoes. But we’ll see.

Here at Dandelion Chandelier, we’re always fascinated to learn what a person chooses to wear for the biggest (planned) events in their lives. Weddings, graduations, the red carpet – we love all of it. Based on what the gents wore at the big NBA draft ceremony, the traditional tailored suit is far from “dead.” It’s just taking on new life and sartorial flair – in some cases sans tie – in more expressive and optimistic colors. Including purple pinstripe.

This week in Major League Baseball, it’s all about the New York Yankees.  They are at the top of the AL East, up 5.5 games on Tampa Bay as of this posting. And up 8 against their arch-rivals, the Boston Red Sox.

The pinstripes have won 8 in a row, and their roster of injured stars is starting to return. They won a thrilling game against the Houston Astros last night, 7-5. That gives the Yanks the longest active winning streak in baseball — only the Astros, who have a pair of 10-game winning streaks, have had a longer winning streak this year.

Gary Sanchez is back and red hot. Didi Gregorius and Giancarlo Stanton are back. And – all rise! – Aaron Judge returned to the lineup on Friday. C.C. Sabathia logged his 250th win this past week, which is a huge accomplishment.

However, as previously reported, the players who have carried the Yanks through the past couple of months are guys with no name recognition. For example, D.J. LeMahiue and Cameron Maybin have both batted over .300 for the season. They’ve achieved amazing stats with runners in scoring position. Maybin suffered a calf injury on Friday and will be out for 6-8 weeks – before that, he hit .405 from June 5-19, 2019.  If you want to dazzle the baseball fans in your life, just casually drop one of those names and see your street cred sky-rocket.

The Yanks have now hit home runs in 25 consecutive games, tying the franchise record. The major league record is 27.  Watch this space to see what happens next. And tune in for the big game in London this coming weekend.

The Houston Astros have hit a bad patch: yesterday’s loss was their seventh in a row.

Meanwhile, the LA Dodgers are the first team to chalk up 50 wins this season. As of this posting, they’re at 53-25 after a win over the Colorado Rockies, who are now 12 games behind them in the NL West. The Braves have widened their lead over the Phillies in the NL East, while the Cubs, Brewers and Cardinals are all within a game of each other in the NL Central.

And in a story that may remind you of Boston Red Sox ace Curt Schilling and his bloody sock in the 2004 AL Championship Series against the Yankees, here’s another one to add to The Tough Guy File:

Max Sherzer, ace pitcher of the Washington Nationals, was practicing bunting this week. He hit a ball at an odd angle, and it hit him in the face, breaking his nose and giving him a black eye. It was all caught on video. The mishap didn’t slow him down, though. He went on to pitch 7 scoreless innings against the Phillies, with 10 strike-outs.

After a series of foul ball injuries this season, MLB teams are extending the protective netting that runs down stadium baselines. The first team to implement the move was the Chicago White Sox. The Washington Nationals will install theirs during the All-Star break. These seem like sound moves: the netting doesn’t deter from enjoying the game, and it provides much-needed protection, especially for distracted kids at the games.

Law enforcement reports that injured Boston Red Sox player “Big Papi” Ortiz was not the target of the hit attempt that resulted in him being shot in the Dominican Republic last week. The team flew him to a Boston hospital; he continues to improve and is expected to make a full recovery.

This week, New England Patriots quarterback Tom Brady posted a video on social media showing him throwing passes to Josh Gordon, his former teammate who has been suspended indefinitely for violating the league’s substance abuse policy. The Pats hope the league will reinstate the receiver before the start of the 2019 season. Gordon has struggled with personal issues, and Brady has invested in lending him a hand. He feels the player made the team better, and he’d like to see him back on the field. The press reports the Brady even has included Gordon in some family dinners. Awww . . .

Vegas odds-makers have given Kansas City Chiefs quarterback Patrick Mahomes the best odds to be the 2019-20 season MVP. Tom Brady is currently 4th.

Meanwhile, in Green Bay, there are news reports that the new Packers head coach Matt LaFleur and quarterback Aaron Rodgers are having a heated dispute regarding Rodgers’ control of offense. Specifically, whether the quarterback will have the freedom at the line of scrimmage to “audible out” of plays he may not like. Some say the disagreement is over-blown and that the two get along fine. Time will tell.

From our Huh? File: Brett Favre dropped a “fake news” Instagram announcing he was “un-retiring” and coming back into the game. We have no idea why he did this.