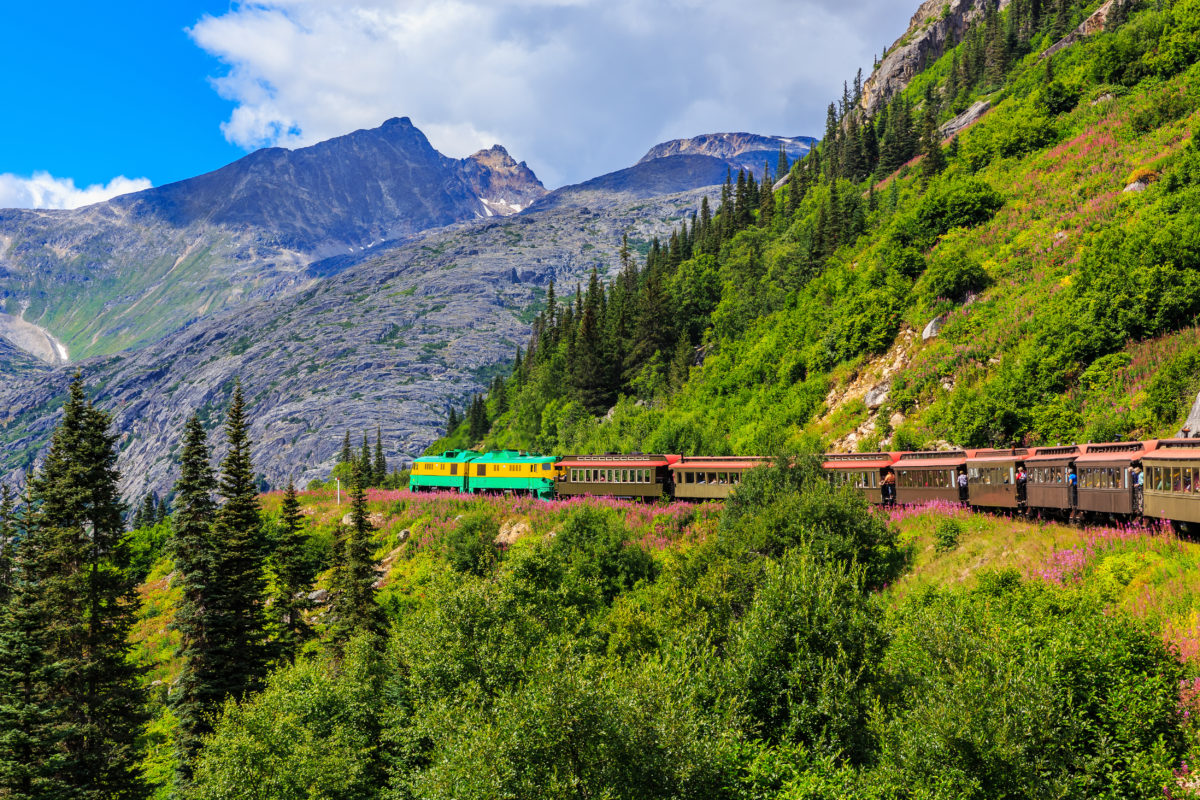 If you’re taking a cruise, or otherwise planning to be in Skagway, Alaska, we highly recommend taking a ride on the vintage White Pass and Yukon Route train while you’re there. We did recently as part of a 7-day voyage on Norwegian Cruise Lines’ Norwegian Bliss. (Full disclosure – the author is a board member of the ship’s parent company). Here’s our report on the stunning beauty you’ll find on the train in Skagway, Alaska.

When you think of Alaska, you probably think of whale watches, kayaking, glaciers and wildlife.

But if you ask a friend or family member who has been to Skagway, Alaska what you should do while you’re there, they will almost surely mention the train. It’s one of the iconic experiences of a visit to this part of the world. The next thing they’ll say, though, is “it’s beautiful, but it’s really long.”

Dear reader, don’t be put off by that. The easy hack if you don’t want to spend 5-8 hours on an excursion is to opt for the 3-hour version. It’s perfect for families with young kids and anyone else who – like us – wouldn’t voluntarily choose to spend several hours in a vintage train car with no air conditioning. In three hours, you’ll still see some gorgeous scenery, and hear the history of the Klondike Gold Rush. And afterward, you’ll have plenty of time left for other adventures.

Are you on board for the express train? Then let’s go.

stunning beauty on the train in skagway alaska

The White Pass and Yukon train is incredibly easy to get to if you arrive in Skagway by cruise ship. The train tracks begin and end right at the cruise ship dock. Which makes this a perfect multi-generational family excursion – it’s not at all demanding physically.

Luxury lovers, take note: the train on the White Pass and Yukon Route is reasonably comfortable. But city types and sophisticates won’t consider it a luxurious transport. However, everyone working on this railway is extremely friendly, and our fellow passengers were good fun to talk with along the way. So don’t be put off by first impressions – the luxury is in what you’ll see and experience on the journey.

where to be to experience the views

We highly recommend getting seats near the very front or back of your rail car. If you’re a photographer, or just want to breathe in the crisp mountain air, you’ll want to stand on the wrought-iron train platforms in either the front or rear of each car. Parents take note: kids must be accompanied by an adult on the platforms at all times.

We spent most of the journey up the mountain out on a platform, and it was huge fun.

When you’re on this journey, don’t forget to look down from time to time . . . as long as you don’t have vertigo.

Early on, the train passes maintenance shops, the “Gold Rush” cemetery – final resting place of gangsters and heroes of the Klondike Gold Rush – and the popular Denver Glacier hiking trail.

The first preview of the stunning scenery to come, though, is when the train passes the East Fork of the Skagway River.

The Skagway River as seen from the White Pass and Yukon Railway. Photo Credit: Dandelion Chandelier.

The first seriously dramatic view on the journey is at Rocky Point. A gorgeous valley spreads out before you, and even on a foggy day like the one when we visited, you can see both the Harding Glacier and Mount Harding.

Mount Harding and the Harding Glacier as seen from the White Pass and Yukon Railway at Rocky Point. Photo Credit: Dandelion Chandelier.

Another milestone? The iconic sign proclaiming “On to Alaska with Buchanan.” Hung almost 100 years ago, the sign was painted  by the Buchanan Boys Tour Group, circa 1925. During that era, they visited Skagway every year from their home in Detroit (our home town!).

The Buchanan Rock as seen from the White Pass and Yukon Railway in Skagway, Alaska. Photo Credit: Dandelion Chandelier,

Seeing the topography with your own eyes will give you a deep appreciation for the grit, drive and determination that the indigenous people who made this landscape their home must have had.

All along the rail line, there are wooden signs marking various points of interest and landmarks. Some are reasonably easy to decipher.

Our favorite, though, was the one reading Slippery Rock. It’s set very close to a vertiginous fall-off, complete with loose crumbling rocks. Which left all of us in our train car chuckling. Good know that we should be really careful not to slip if we go out there . . .

At this marker, you’ll have a jaw-dropping view of the Lynn Canal, Mount Harding, and the Chikat Mountain Range. It’s so beautiful, it’s almost hard to comprehend when you see it for the first time – especially if you’re out on the train platform, with no window between you and this majestic landscape (which is where we were). It’s pretty hard not to be awe-struck.

As we journey onward at a reasonably good speed, the train chugged around a bend and a very fragile bridge came into view. We exchanged uneasy glances with our train car companions: are we actually going over THAT? Our speed didn’t slow, which caused our traveling companion to murmur under his breath aren’t we going to hit that bridge going too fast?

Happily, we realized that we were NOT crossing this bridge – we were just passing it. Might have been good to know that a tick sooner, but fair enough. We later learned that it’s called the Steel Cantilever Bridge. Built in 1901, it was the tallest cantilever bridge in the world until 1969.

Once you spy the extremely deep gorge that runs underneath this bridge, you’ll be doubly glad that the train is not actually going over it. ‘Cause it would be a long fall if it collapsed under you.

Then we entered a narrow pitch-black tunnel, which runs through the aptly-named Tunnel Mountain. Which was actually kind of cool. But also kind of scary, because who knew what was waiting on the other side?

Happily, nothing awaited but more gorgeous scenery. And Canada!

At the Canadian border, a small cabin serves as the backdrop for 5 flags: the US, Alaska, Yukon, British Columbia and Canada. Shortly after that, the “express” train turns back toward Skagway. The longer versions of the tour continue on further into Canada; some include a salmon bake before you return.

Five flags at the border of Canada and the US in Skagway, Alaska as seen from the White Pass and Yukon Railway. Photo Credit: Dandelion Chandelier.

On the way back down the mountain, we had a chance to reflect and to appreciate the slightly less obvious gems of natural beauty on this journey. The huge mountain landscapes are the show-stoppers. But there’s incredible scenery that’s almost close enough to touch that could escape your notice.

Also on the way back down, we got a good look at Bridal Veil Falls and some of the smaller waterfalls and streams. One good thing about the rainy, misty weather? The waterfalls were especially beautiful.

If you step out on the train platform toward the latter part of your journey, close your eyes and breath in the scent of the forest. You’ll smell the sweet fragrance of a Christmas tree lot. The train is too noisy to indulge in listening to birdsong or to the sound of the river – but the intoxicating smell of the evergreens alone is worth the trip.

All too soon you’ll be back at ground level. And you’ll wonder why anyone would say this trip is too long. For us, it seemed to be just the right length.

Heading back to our ship, Norwegian Bliss, we passed painted rocks with the emblems of each major vessel that regularly sails into Skagway. Whoo hoo, Bliss! With helicopters and seagulls overhead, it was time to press on and head north.

In a day filled with wonders, we have to say that the sweetest view of the entire visit may have been the one looking back toward Skagway as dusk settled in. It’s a staggeringly beautiful place.

If you decide to take this trip, when you return home, you can share the news that you can experience the stunning beauty on the train in Skagway Alaska in only three hours! We bet the memories will stay with you for far longer than that.