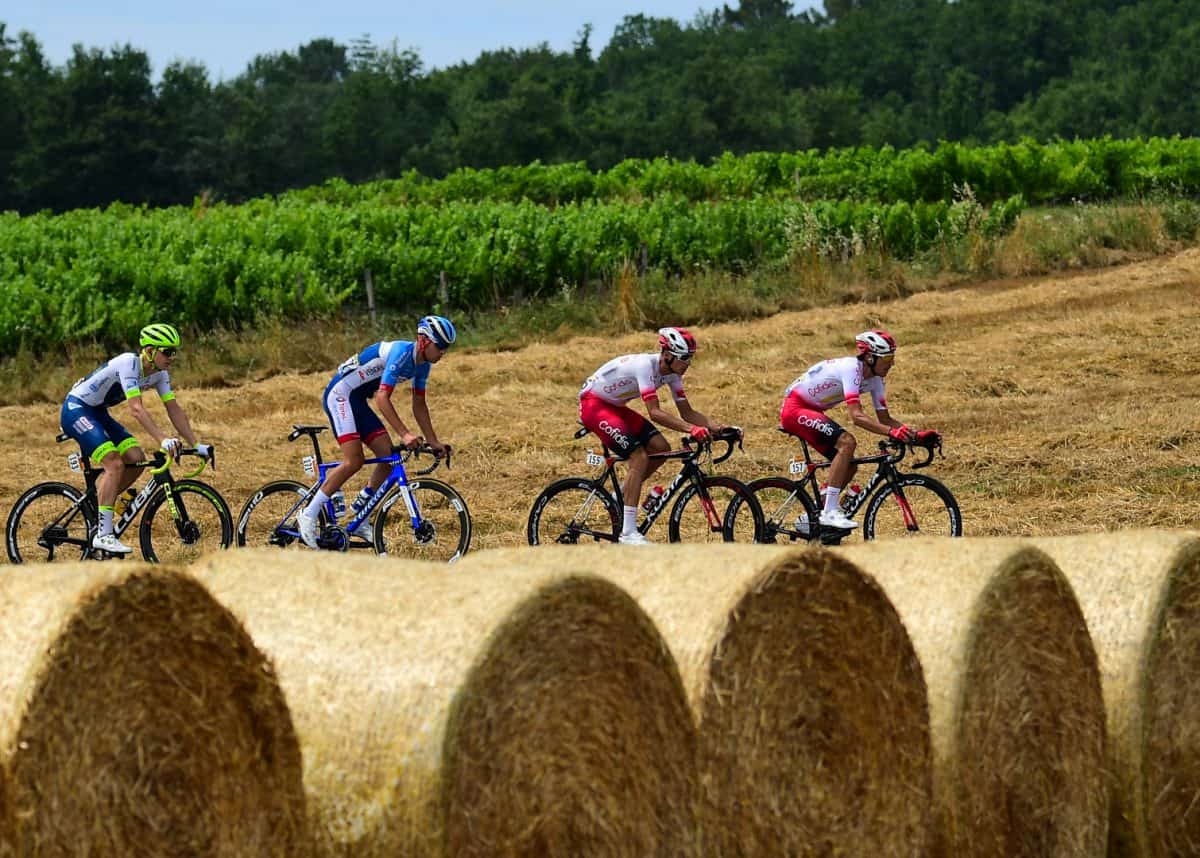 This Week in Sports Talk (TWIST) is our weekly roundup of the big events and what’s up next in the world of sports. Heading into the week of July 21, 2019, straight from the Dandelion Chandelier Sports Desk, here are the top headlines and a preview of the week to come.

It’s too darn hot! Here in New York, the authorities have cancelled the Triathlon scheduled for today due to the oppressive heat. Our Sports Desk sniffs that “triathletes are wimps” for not going ahead with the competition. But personally, all we have to say is everybody into the pool! Let’s start with some short takes on this sweaty sweltering sticky swampy sultry summer Sunday. Did we mention it’s really hot?

The Tour De France rolls on; it concludes on July 28th in Paris. As of this posting, with Stage 14 completed, Julian Allaphilippe of France is still wearing the leader’s yellow jersey. His unexpected breakout in this competition has made him a darling of the press, and French fans are cautiously beginning to dream of a seeing a homegrown winner for the first time since 1985.

If you’re an occasional sports fan who loves well-written literary fiction, definitely read We Begin our Ascent by Joe Mungo Reed. We read it exactly a year ago during the Tour de France, and we loved it. It will bring the sport of cycling to emotional life for you in a way that watching the Tour on TV might not.

The 148th Open, also known as the British Open, is being played in Northern Ireland this year for the first time in 68 years. The competition for the Claret Jug is going down at the Dunluce Links at Royal Portrush.  The tournament’s first round was Thursday, and two of the most-watched celebrity golfers – Tiger Woods and Rory McIlory – had terrible first rounds.

The Irish course is McIlroy’s “home” course. He started the first hole with a quadruple bogey. But then – true story – his shot on the first tee went out of bounds, hit the pocket of a woman in the gallery, and broke her mobile phone. Wut????  In the end, McIlroy missed the cut after being favored to win.

Meanwhile, McIlroy’s countryman Shane Lowry had a round for the ages yesterday. Lowry’s 16-under 197 is the lowest 54-hole score in Open history. He sits atop the leaderboard by four strokes heading into today’s round. He’s followed by Tommy Fleetwood at 12 under and J.B. Holmes at 10 under. Tee times have been moved up today, as adverse weather is expected.

This week comes word from the world of competitive eating that skulduggery may be afoot. Takeru Kobayashi, a competitive eater from Japan, is accusing American Joey Chestnut of cheating, Kobayashi claims that Chestnut – who won the July 4th hot dog eating contest this year – was consuming hot dogs that are smaller than the specified size. Is this a Deflategate in the making? We hope the authorities are on the case, as it seems quite important to get to the bottom of this pressing matter.

In case you missed it, last Sunday at the men’s singles Final at Wimbledon, Roger Federer engaged in an epic battle with Novak Djokovic, the No. 1 seed and defending champion. Djokovic claimed victory and won his fifth Wimbledon title in the longest Final match of all time. It lasted 5 hours, as Prince William and Kate Middleton looked on from the stands. Djokovic saved two match points and then prevailed in a fifth-set tie-breaker. Of note, Federer lost despite winning at least 6 games in every set; he won one set 6 – 2 and one 6 – 4, and then lost the other three sets in tie breakers.

Lots of significant news at this year’s Wimbledon: the rise of Coco Gauff, the epic rematch between Roger Federer and Rafael Nadal. Now it’s on to the US Open. Let’s see what you got, New York.

Top Sports Headlines heading into the week of July 21, 2019

Now that we’re warmed up, here’s everything else you need to know about sports heading into the week of July 21, 2019:

Now that the All-Star break is over, its back to business in Major League Baseball. In a classic New York moment, Yankees manager Aaron Boone let loose an epic tirade against a rookie umpire during a game Thursday versus the Tampa Bay Rays. A day later, Boone confessed that ref Brennan Miller “handled the situation with a lot more class than I did.” Boone received a one-game suspension for his profanity-laced rant.

the best new books about baseball 2019

As of this posting, the Yankees sit at the top of the AL East, 10 games ahead of the Tampa Bay Rays. And 11 ahead of their arch-rivals the Boston Red Sox. If you live in Baltimore, it’s tough being a baseball fan right now – the Orioles are 34 games back of the Yanks.

Elsewhere in the American League, the Minnesota Twins are only 3 games over Cleveland in the AL Central, and the Houston Astros are at the top of the AL West, 5.5 ahead of Oakland.

In the National League, the LA Dodgers continue to dominate in the West; they’re now 14 games ahead of the Arizona Diamondbacks. The Chicago Cubs are 3.5 games ahead of the Cardinals and the Brewers in the NL Central. And the Atlanta Braves are 5.5 ahead in the NL East.

Here’s one from our They Don’t Make ‘Em Like They Used To File: Future Hall of Fame member Albert Pujols, first baseman and designated hitter for the Los Angeles Angels, is in the “600 home runs” club. He’s an incredible slugger, and has never in his 19-year career been struck out 100 times or more in a season. By comparison, with the current season just over half completed, Bryce Harper has already had 112 strikeouts. The Yankees’ Luke Voit has 100 and the Mets’ rookie slugger Pete Alonzo (winner of the Home Run Derby) already has 102.

The Baseball Hall of Fame induction ceremony is today. The five living members of the Class of 2019 are in Cooperstown to receive the honor. Four pitchers and two Designated Hitters are being inducted, including former Yankee Mariano Rivera, the greatest closer and arguably the most important Yankee during their late 1990’s-early 2000’s dominance. Rivera is the first player to be unanimously voted in to the Hall of Fame (Ken Griffey Jr is the next-highest vote getter at 99.32%).

The other inductees this year are Roy Halliday (who died tragically in a plane crash in 2017); Mike Mussina; Harold Baines; Lee Smith; and Designated Hitter Edgar Martinez.

Among the top sports headlines heading into the week of July 21, 2019, Oklahoma City Thunder management may have decided not to trade recently-acquired Chris Paul (aka CP3), at least not right away. Paul has a payday of $38 million coming this season, and $41.4 million next season. He can choose to decline those “player option” payments if he wants to join a team with a shot at a Championship. Word on the street earlier in the week was that Pauls’ likely destinations were the Miami Heat, the Dallas Mavericks – maybe even the New York Knicks. Now comes word that he may start the season with the Thunder and be traded in mid-December of this year.

Speaking of the Knicks, this week we read an article by a hometown journalist in New York trying to cheer up despondent Knicks fans by reminding them that phenom Giannis Antetokounmpo of the Milwaukee Bucks could conceivably join the team as a free agent in two years. Vegas currently has Antetokounmpo as the favorite for MVP for the upcoming season. He’s the reigning NBA MVP, so its certainly not a crazy idea.

In other Giannis Antetokounmpo news, this week the player revealed the next iteration of his Nike Zoom Freak 1 basketball sneaker. And cineastes should take note. It’s inspired by one of his favorite films, “Coming to America.” The shoe features a mesh-based upper covered with a leopard print inspired by the ensemble worn by Eddie Murphy’s character, Prince Akeem. Faux fur material with the name of the movie is embroidered on the tongue. Oh say can you see? Get ’em while you can, dear reader.

Electronic Arts will release the video game Madden NFL 20 on August 2nd, but the annual ritual of complaints and chatter about the player rankings in this season’s version has already begun. Our Sports Desk reports that every year, most players end up complaining about their “Madden rating.”

The game creators give each player in the game (for example, quarterbacks Tom Brady and Patrick Mahomes) a rating that determines the skill of the animated player in the game. The rating takes account of metrics like speed, arm strength, and so on.  Once those become known, most of the players complain (except the number one in their position group, of course) about their ranking and their actual score. For example, Aaron Rodgers has fallen out of the top five quarterbacks in the current rankings.

Reigning NFL MVP quarterback Patrick Mahomes is on the cover of the game this year.

To tide you over until the NFL season begins, here’s some news from Vegas. The new predicted win totals have the Kansas City Chiefs as number one with 12 victories. The New England Patriots are in second place with 11. The LA Rams and New Orleans Saints are next at 10.5. The New York Jets are in at 7.5, the New York Giants at 6, and the Miami Dolphins at 5.

Former NFL All-Pro and Tennessee Titans star Albert Haynesworth has appealed to the public for a kidney donor. The press reports that more than 1,000 potential transplant donors have already come forward. Insiders grouse that defensive tackle Haynesworth was considered a “pretty dirty” player during his 10 seasons in the NFL. So it’s somewhat ironic, or perhaps poetic, that he’s now reaching out for compassion from others.

Those are the top headlines in sports heading into the week of July 21, 2019. You’re good to go. See you next week!