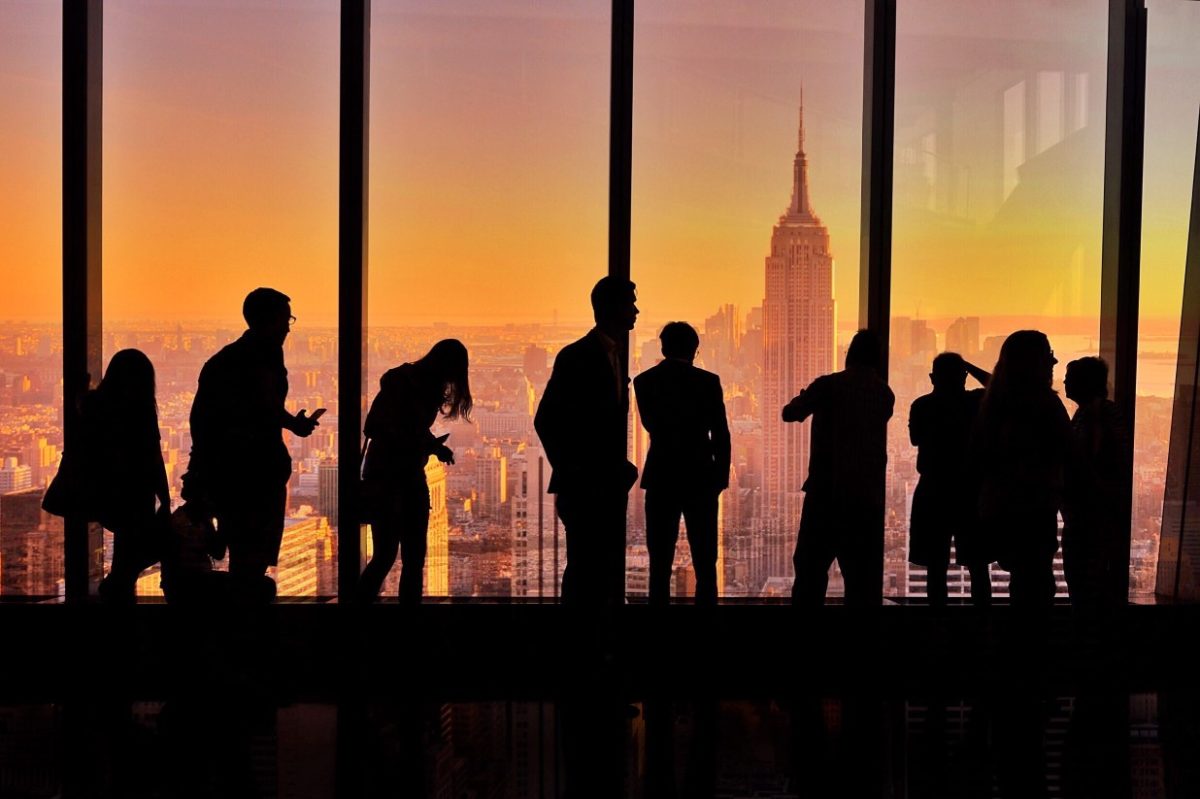 Sorry Paris, but there is nowhere we would rather spend autumn than right here in New York City. Well, I guess we wouldn’t mind one long weekend or two after apple-picking season is over!

The warm but brisk weather is made for iconic strolls, as well as going off the beaten path to explore the neighborhood gems that luxury insiders frequent. And in the city that never sleeps, there is always something new to check out and tell your crew about.

If you’re feeling nostalgic for summer already, rest assured. There are lots of exciting new things hitting the city this fall. Enough to make you forget about the long, lazy days at the beach. So put on those knee high boots and leather jacket and let’s go!

Here are the new openings that have captured our attention in the world of luxury retail, food, culture and more in New York City this fall.

Talk to any New Yorker for 5 minutes and they will start lamenting about their favorite shop shuttering or a row of storefronts sitting empty on a once vibrant and bustling block. Still, there are some notable and anticipated openings in New York City to look forward to this fall.

The biggest news is that we are finally getting a Nordstrom, slated to open in October at 57th and Broadway. According to their press release, customers will be able to shop 320,000 square feet of retail space located on seven levels.

The best cool and chic new things to do in New York City this fall: Nordstroms opens its first women’s store. Courtesy Photo.

In addition to merchandise categories of clothing, accessories, shoes, beauty, children’s and home, the store will feature a robust selection of exclusive, limited-edition and emerging brands and styles. In addition to this mega store, Nordstrom is debuting two “Nordstrom Local” locations, one on the Upper East Side and another in the West Village. These will be service-oriented hubs where customers can process returns, pick up online orders, get alterations and free styling help.

The destination Apple store on 5th Avenue with its iconic glass cube has been a fixture of Manhattan’s tourist circuit since it arrived in 2006. It closed two years ago for renovation and re-opened bigger, brighter and bolder on September 20th.

The spaces for activities, Genius consultations, and other interactions have been expanded. And there’s now enough light filtering through the subterranean space for live trees. As well as a new LED system overhead that will responsively adjust its color temperature over the course of the day. Sounds like a wonderful space for some selfies, self-reflection and of course, shopping.

The corridor along Fifth Avenue in the 40’s has become a Runner’s Row, with Nike, Adidas and Asics all opening enormous new stores there in the past couple of years.

The best cool and chic new things to do in New York City this fall: Puma opens its first store in the city. Courtesy Photo.

They’re now joined by Puma. The brand unveiled its first flagship store in New York City on 49th and Fifth earlier this month. Like so many other new stores, this one emphasizes immersive shopping experiences. For example, in the soccer section of the store is a room with video simulations that put the customer through drills coached by Puma soccer stars. To highlight its comeback to the the sport of basketball, Puma set up a space where shoppers can hang out on mini bleachers and play the latest NBA 2K video game.

The piece de resistance are Puma’s F1 racing simulators—the same models professional F1 teams which rumble and roar as your car accelerates and hurtles through turns and race around a course of New York City. I know I’ll be bringing my kids there on a rainy day this fall!

The best cool and chic new things to do in New York City this fall: Sandro opens its first store in the city. Courtesy Photo.

In addition to their quality and sophisticated clothing, mother and son team Evelyne and Ilan Chetrite have brought in ceramics and art from French artisans and artists that hold significance for them, personalizing the store and giving it that ineffable je ne sais quoi.

Legendary upscale restaurant Gotham Bar & Grill has reopened in Greenwich Village, headed by newly appointed chef Victoria Blamey. The previous menu has been completely overhauled and updated with a more multicultural and innovative menu that has a seafood focus. Expect dishes like Yellowtail Crudo with Puree of Smoked Avocado, Fish Sauce, Cilantro and Milk, Smoked Trout Roe with Burrata and Spaghetti with Spicy Octopus Ragu.

The best cool and chic new things to do in New York City this fall: Gotham Bar & Grill gets a makeover and new chef. Courtesy Photo.

In more Gotham news, Alfred Portale, the pioneering chef predating Blamey, who has a Michelin star, three James Beard Awards, and five three-star reviews in the Times, finally opened a place of his own aptly named Portale. Located in Chelsea, Portale will feature simple Italian food, modern and contemporary with a focus on vegetables.

The folks behind the acclaimed Williamsburg hot spot Llama Inn have opened a new upscale restaurant in the West Village, Llama San. The menu features a mash up of Japanese and Peruvian cuisine. Yep, you heard that right. Chef-Owner, Erik Ramirez is Peruvian with a Japanese grandmother. He aims to use his unique heritage to cook dishes like Quinoa-Infused Tofu served with Quinoa Furikake, Wild Sturgeon Caviar, and Chancaca, a Peruvian syrup made from sugarcane.

The best cool and chic new things to do in New York City this fall: Llama San opens in Manhattan. Courtesy Photo.

Back to Nordstrom, the retail store will offer a variety of upscale dining establishments. Most notably, Wolf is the first New York restaurant from Chef Ethan Stowell, a James Beard Award nominee and one of Food & Wine’s Best New Chefs in America.

The best cool and chic new things to do in New York City this fall: Ethan Stowell’s Wolf opens in Manhattan. Courtesy Photo.

Autumn in New York always brings a flurry of new shows and performing arts experiences. We have one revival and two original musicals that we can’t wait to see.

9. Porgy and Bess at the Met Opera

The best cool and chic new things to do in New York City this fall: Porgy and Bess at the Metropolitan Opera. Courtesy Photo.

10. Lin-Manuel Miranda is back in town

Before there was Hamilton and even In the Heights, there was Lin-Manuel Miranda and Anthony Veneziale’s hip-hop improv music group, Freestyle Love Supreme.

The crew takes to the stage this fall. Each evening, the audience is urged to suggest phrases and share anecdotes which the group then uses onstage as inspiration for their spontaneous and haphazard, yet undeniably sophisticated and transcendent series of rapped musical narratives. It’s honest and authentic and so New York.

The best cool and chic new things to do in New York City this fall: Freestyle Love Supreme. Courtesy Photo.

Jagged Little Pill is a musical using Alanis Morissette’s songs from her trailblazing album of the same name. The story, written by Academy Award winner Diablo Cody, centers around the Healys, a seemingly picture-perfect family.

When the cracks beneath the surface begin to show, they must choose between maintaining the status quo or facing harsh truths about themselves, their community, and the world around them. It features Morissette’s iconic songs, including “Ironic,” “You Oughta Know,” and “Hand In My Pocket,” plus brand-new songs written for the show.

12. Pace Gallery has a new home in Chelsea

The best cool and chic new things to do in New York City this fall: Pace Gallery has a new flagship Courtesy Photo.

Pace, which represents the estates of Agnes Martin, Mark Rothko and Robert Ryman along with living artists like Chuck Close, Adam Pendleton and Adrian Ghenie, views this flagship as an opportunity to breathe new life into the art gallery as an inclusive, communal space for cross-disciplinary arts and programming.

The Museum of Modern Art will reopen in October after an extensive renovation and expansion. The new footprint accommodates more space to exhibit artists from diverse backgrounds and geographies than ever before.

The best cool and chic new things to do in New York City this fall: MoMA reopens after a summer-long renovation. Courtesy Photo.

In addition, the state-of-the-art Marie-Josée and Henry Kravis Studio will be the world’s first dedicated space for performance, process, and time-based art to be centrally integrated within the galleries of a major museum. And finally, The Paula and James Crown Creativity Lab will be an experimental, creative space to explore ideas, questions, and art processes that arise from MoMA’s collection.

Aside from these more traditional experiences of art, Instagram culture has birthed a genre of “pop-ups” – temporary, immersive, and multi-sensory installations.

14. The Color Factory in SoHo

The Color Factory is hosting a pop-up in Soho until mid-November. Visitors experience 16 participatory installations inspired by the colors of the city. There are 16 rooms to explore throughout the 20,000-square-foot space. Each one showcases immersive artwork from local writers, poets and musicians.

The best cool and chic new things to do in New York City this fall: The Color Factory pop-up. Courtesy Photo.

Highlights include ombré floating balloons with wishes for the world, a walkable infographic leading visitors to their “secret color”, a baby-blue ball pit and a disco-themed dance floor.

Arcadia Earth is the creation of Italian-born, New York based experimental artist Valentino Vettori. His 18-room exhibition in Noho is powered by artificial reality that takes viewers on a mind-bending and multi-sensory journey through underwater worlds, mystical forests, and underground caves.

The best cool and chic new things to do in New York City this fall: The Arcadia pop-up. Courtesy Photo.

In addition to the augmented reality rooms, there are rooms made from the pages of discarded library books, a tsunami of waves created from plastic that washed up on the shores of Long Island, and an oceanic space filled with vibrant plastic-coated jellyfish. Until November, proceeds from ticket sales plant a tree and go to Oceanic Global, Arcadia’s charity and educational partner.

There you have it- our curated list of the new places shop and eat, and things to see and do for a luxurious fall in New York City. We hope these highlights make you see the city in a new way. While by no means an exhaustive list, may they inspire you to make some discoveries of your own- which is the way of a true New Yorker.