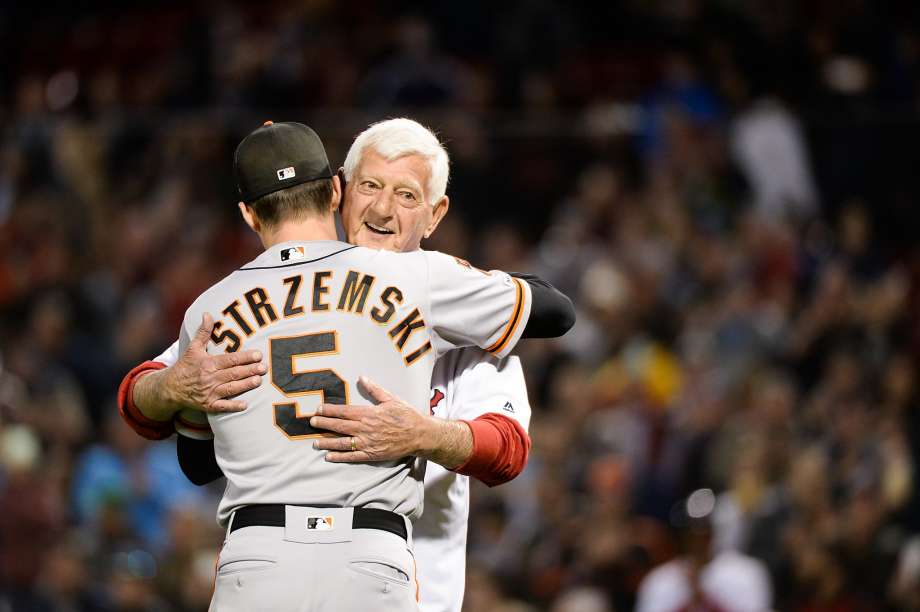 This Week in Sports Talk (TWIST) is our weekly roundup of top headlines and sports news, plus a preview of what’s up next. Heading into the week of September 22, 2019, here’s the top sports news, with a twist. Skim it, and you’ll be good to go all week.

We begin with some short takes in sports news heading into the week of September 22, 2019.

all in the family

Major League Baseball fans revere tradition, and this week there were two moments that touched fans of many generations.

First, rookie Cavan Biggio – second baseman for the Toronto Blue Jays – hit for the cycle this week, getting a triple in his final at-bat. His dad, Hall of Famer Craig Biggio, did the same thing during his MLB career. They are just the second father-son pair to do so in league history.

Second, Mike Yastrzemski, the grandson of Boston Red Sox legend Carl Yastrzemski, made his Fenway Park debut Tuesday night with the San Francisco Giants. Carl threw the first pitch of the game to his grandson.

And then, with his granddad in the stands, young Yastrzemski clubbed a homer.  So. Sweet!

the ceiling can’t hold them

With the Buffalo Bills off to a 2-0 start, officials in the area are worried that fans may be even more exuberant than normal for their home opener against the Cincinnati Bengals this afternoon. They’re sending in hundreds of extra security personnel just to be sure the crazy is contained. OMG, what  if they win? Gather up the chickens and put them in the pen – it could could be a long wild night in Buffalo.

On Thursday night, Tulane pulled off a 38-31 upset victory at home against Houston. Yesterday, #13 Wisconsin stunned #11 Michigan in a 35-14 victory. It was an embarrassing loss for Head Coach Jim Harbaugh. Michigan is 1-6 on the road against ranked opponents during his tenure.

Notre Dame’s loss yesterday all but eliminates them from the national playoffs. Our Sports Desk notes that they deserve credit for playing a top 5 team in week 4. By way of contrast, this weekend, Alabama played Southern Miss and won 49-7. And Clemson defeated Charlotte 52-10. No wonder the kids leave the games early! Wonder how that tracking system is working at ‘Bama?

Finally, in a late-night Pac12 shoot-out, UCLA beat Washington State with a 67-63 final score. The combined score of 130 points with no overtime is the most in a PAC 12 conference game in history.

Top Sports Headlines heading into the week of September 22, 2019

Now that we’re warmed up, here’s everything else you need to know about sports heading into the week of September 22, 2019:

For the first time since 2012, the New York Yankees have clinched the AL East. The Yankees secured the division title Thursday night with a 9-1 win over the Angels. New York is the second team to clinch a division title this year, joining the LA Dodgers. The Yanks also crossed the 100-win mark, making Aaron Boone the first manager to win over 100 games in each of his first two seasons. The Yanks are also the only team to have 5 players hit 25+ home runs 2 seasons in a row.

But a merely good season isn’t what the Yankees want or need right now. As our Dandelion Chandelier Sports Desk puts it: “either they make it to the World Series or this season is a bust.” Yikes. That won’t be easy.

Sports news heading into the week of September 22, 2019: the New York Yankees clinch the AL East.

Currently, the Houston Astros have the best record in baseball at 101-54. Just a sliver ahead of the Yanks, who are at 101-55. They’re in a tight race to achieve home field advantage in the playoffs. What’s really worrisome for Yanks fans is the strength of the Astros’ starting pitching. There’s also the reality that there are teams in the AL who manage to scrap it out with the pinstripes in every game – like the Oakland A’s and Tampa Bay Ray’s.

The Yankees also continue to be plagued by injuries. Delin Betances made just one appearance this season after spending time on the IL with a shoulder injury. In an instance of really bad luck, Betances celebrated by being back on the field by hopping off the mound. He tore his Achilles in the process. And is now out for the rest of the season. Ugh! At least they still have their ninth inning closer, Aroldis Chapman.

Meanwhile, in the NL, the LA Dodgers have the best record, with the Atlanta Braves 4 games back. Both teams have clinched their divisions.

the best new books about baseball 2019

In the wild card race, in the AL the Oakland A’s, Tampa Bay Rays and Cleveland Indians are in a tight race for the 2 slots, with Cleveland currently one game behind the Rays.

In the NL, right now the Washington Nationals and Milwaukee Brewers hold the wild cards, with the Chicago Cubs now three games back. The Cubs had been on a good trajectory, but they lost last night with back-to-back homers against the St. Louis Cardinals in the ninth inning. As a result, they’ve  gone from a 1-game lead in the wild card to 3 games back in the space of a week. Having lost 5 in a row, they’re now a  long shot to make the playoffs.

Similarly, the Mets are starting to fade from view – they’re currently 4.5 games out of the wild card. They’d have to win every remaining game, plus have the “right” teams lose to make it at this point.

As a reminder, the two wild card teams meet each other in a one-game postseason playoff game.

There is one bright spot for Mets fans this season – and his name is Pete Alonso. The rookie broke the NL record for homers in a rookie season, and now he’s chasing Aaron Judge for the MLB record. He’s at 50, and the record is 52. He’s only the second rookie in MLB history to get that far. Amazing season, dude.

New York Yankees‘ ace Domingo German will not be pitching again this season, as he has been placed on administrative leave. German, 27, is being investigated for an alleged domestic violence incident involving his girlfriend at home earlier this week.

Pittsburgh Pirates closer Felipe Vazquez has been arrested on charges of soliciting a child, computer pornography and providing obscene material to minors.

On a much brighter note, the New York Yankees’ CC Sabathia made his final regular season start mid-week, and was treated to a rousing send-off from the fans in the Bronx.

There are lots of changes in the starting quarterback lineup as the NFL heads into Week 3.

Several marquee names are now on the injured list, including Drew Brees, Ben Rothisberger, Nick Foles, Sam Darnold and Cam Newton. They’re all out this week.

The New York Jets are without their starting quarterback Sam Darnold until after their Week 4 bye – he’s out due to mononucleosis. Trevor Siemian, the Jets’ second-string quarterback, went down with an injury of his own against the Cleveland Browns. Luke Falk, the third-stringer, took over and will start this week. Next man up . . . he’s facing the New England Patriots later today.

And speaking of the Pats . . . they’re on fire. The team did not give up a single touchdown in the first two games of the season. And they have allowed only 6 points (and no touchdowns) in their last three games, including the Super Bowl.

After an 0-2 start, the New York Giants are starting 6th-round draft pick Daniel Jones today against the Tampa Bay Buccaneers. Meaning that the Eli Manning era seems to be truly over. Fans are already debating whether Eli’s career performance warrants a place in the NFL Hall of Fame.

Sports news heading into the week of September 22, 2019: Daniel Jones takes over from Eli Manning as the starting quarterback for the New York Giants.

In what must be encouraging news for the front office, New York Giants fans are clearly excited about Daniel Jones; his jersey sales are up 500 percent season to date.

The Pittsburgh Steelers traded for safety Minkah Fitzpatrick. The former Dolphins first-round pick was put on the trade block last week after concerns that the Dolphins are “tanking” and have no real desire to win games this season.

Jalen Ramsey of the Jags had demanded to be traded prior to the game – maybe he’ll stick around now?

Meanwhile, the speculation about Minshew’s origin story has reached comic proportions. Our Sports Desk is investigating the claim that apparently there is no Gardner Minshew the 1st. So how is he II? Sounds sketchy. A press report speculates that the Jags found him wandering around Area 51, the infamous government installation where alien life is supposedly being monitored. Hmmmm. . . . The Truth is Out There.

We just want to know if mustaches are making a comeback. The Fu-Manchu on Minshew II, the pencil-thin ones on Luke Falk and Cavan Biggio. What’s up with that?

The Antonio Brown (AB) story took another head-spinning twist this week, and seems to be over, at least for now. After two accusations of rape were filed against him, the press reported late this week that Brown had sent threatening texts to one of his accusers. On Friday afternoon, the New England Patriots announced that they were dropping him after just one game.

AB’s future in the NFL is now highly uncertain. This morning, AB posted on social media that he’s “retiring” from the NFL. On the way out, he cast some shade on Patriots owner Robert Kraft, who has had his own issues with possible sexual misconduct and illegal behavior. Apparently, Kraft was particularly bothered by the threatening texts sent to Brown’s accuser. To which AB Tweeted “different strokes, different folks.”

In an interview in last weekend’s Wall Street Journal magazine, NBA star Kevin Durant said that he was “different” from the rest of the Warriors, and never fully fit in. Steph Curry, his former teammate, responded this week saying only that the time he spent with KD was “special” and that he bears him no ill will.

In news from the world of college hoops, DJ Steward has committed to joining the Duke Blue Devils over offers from Texas, North Carolina, Louisville and a handful of others. With the addition of Steward, a prospect from Chicago, the Blue Devils now have the second best 2020 recruiting class.

That’s it. You’re good to go with the top headlines and coming attractions heading into the week of September 22, 2019. Have a good one, and see you next week.