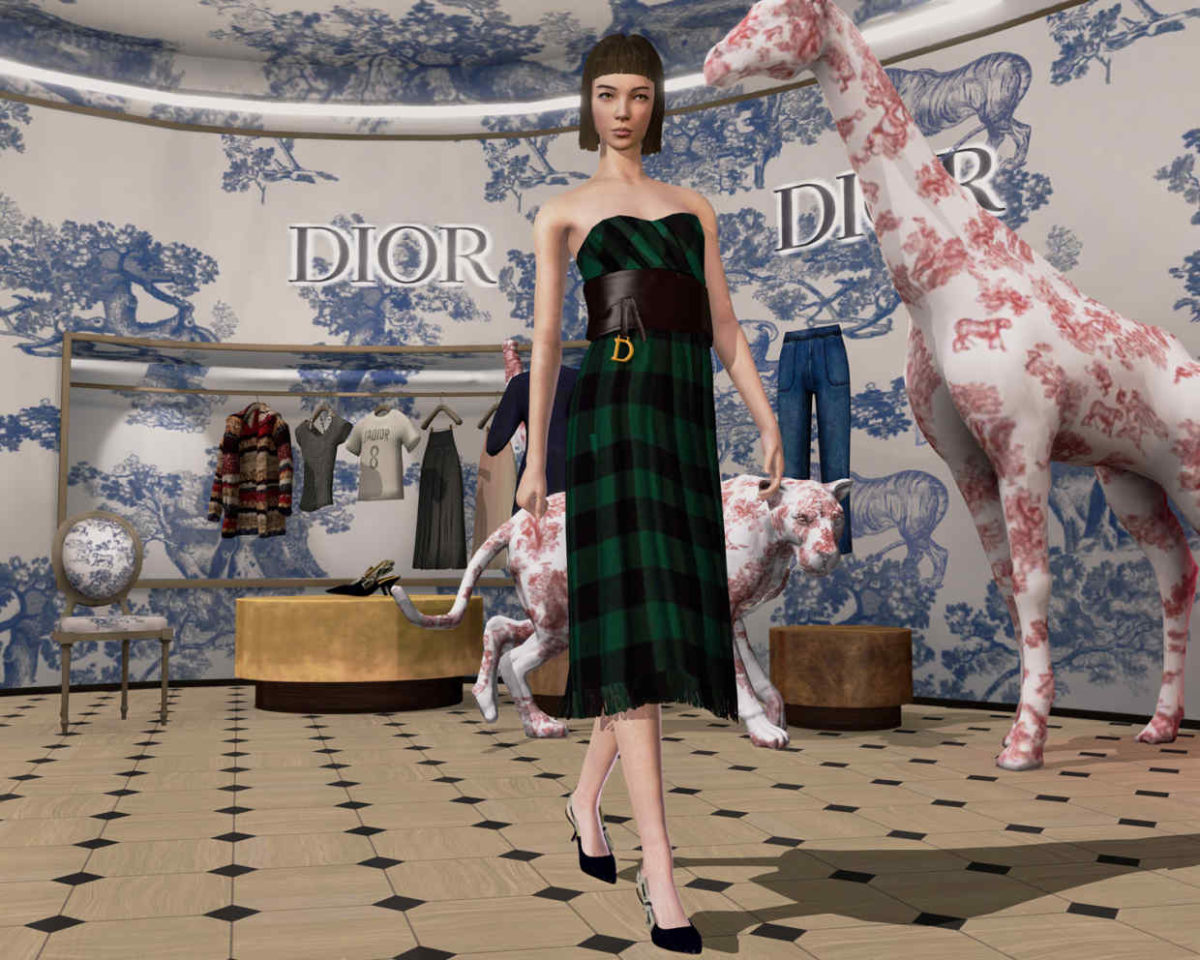 The luxury world is evolving faster and faster, and it’s interesting to see which of the global luxury houses is doing the best job keeping up – and even getting ahead of the curve. Gucci is always in the first tier. When it comes to menswear and accessories, you can add LV and Chanel to the list. But what about luxury tech and the worlds of gaming and VR? We decided to see who’s really in that game right now.

First there was Brickbreaker, then there was Candy Crush, then came Pokemon Go.  It seems no matter where you go these days, be on board a train, at your local coffee shop or even in the UK parliament, you’ll find someone playing the latest “it” game on their phone.

The luxury fashion brands that are into virtual reality (VR) and gaming.

With the spread of mobile phones, gaming has gone from arcades to basements to handheld devices quicker than you can say Pac-Man.  In fact, according to a report from the research firm Newzoo, the gaming market generated about $138.7 billion in revenue last year and is expected to continue to grow by about 10% this year.

The most interesting fact though? These days more than 50% of mobile game users are women.

Yep, you read that right – no longer are video games dominated by adolescent boys.

The luxury fashion brands that are into virtual reality (VR) and gaming.

To the surprise of no one, of course it’s not just game developers that are taking note of this shift. Luxury fashion brands are too, hoping for a chance to meet potential digital customers and transition them into loyal repeat clients.

So which of our favorite luxury brands are getting in on the game?  We found four brands who are working directly with apps and developers, as well as two completely new apps tapping into the luxury fashion space.

With everything from creating a Gucci-clad Bitmoji of yourself to jumping a Burberry-wearing bouncing deer high in the sky to an app that will let you create a closet that would make even Cher Horowitz from Clueless jealous, here’s what’s happening when gaming goes luxury. And vice versa.

By now you have probably heard that Louis Vuitton recently opened a handbag assembly factory in Texas. But did you know that the storied brand has also been at work making virtual clothes for the battle arena game League of Legends?

the luxury gift guide: the new tech and gadgets we love

Just this past week, the brand released its first look (aka skin), designed by Nicolas Ghesquière himself. It’s called the Qiyana Prestige Edition for True Damage.  Available starting November 10, 2019, the champion’s weapon is covered in the iconic Louis Vuitton monogram.

The luxury fashion brands that are into virtual reality (VR) and gaming: Louis Vuitton and the True Damage Qiyana Prestige Edition. Courtesy Photo.

To unlock this skin, gamers will have to buy the 2019 Worlds Pass for 1,650 RP, which is a little over $10. The brand will be releasing another Prestige Edition skin designed by Ghesquière in early 2020. This time for Senna, another member of the League of Legends music project True Damage.

The partnership between Riot Games (the brand behind League of Legends) and LV isn’t just limited to skins and clothing though.  The French fashion house is also creating a custom digital  trophy case for the League’s annual esports finals in Paris this month.

Moschino has partnered with The Sims 4, a video game published by Electronic Arts. Not only can you dress your Sims character in a Moschino branded Freezer Bunny hoodie. You can also dress yourself in one.

The Moschino x The Sims Capsule Collection features iconic motifs from The Sims reimagined as Moschino Couture pieces, including dresses and handbags.  And while the actual Moschino clothes and accessories inspired by the game cost anywhere from $85 for a phone case to $1,295 for a pixelated backpack, the virtual items that resemble the real-life versions cost around $10 for a set.

Inspired by retro 1970’s and 1980’s arcades, Gucci released a duo of 8-bit arcade games to play on their Gucci App earlier this year.  Much like its Alessandro Michele-designed collections, Gucci Arcade is influenced by retro themes that blend the past and present.

The luxury fashion brands that are into virtual reality (VR) and gaming: Gucci Arcade Games.

The games, called Gucci Bee and Gucci Ace, take players through a journey of Gucci’s history via a series of badges hidden throughout the games. Players then collect and place the badges in a special trophy showcase and can compare their scores against other players in a worldwide leaderboard.  While there isn’t any fashion directly involved, the game does create a lasting bond with would be fans and customers and rumor is there are even more games still to come.

Arcade games aren’t all Gucci has been up to. Last year the brand partnered with the celeb backed avatar app, Genies to become the app’s exclusive provider of high end accessories and clothing.

The luxury fashion brands that are into virtual reality (VR) and gaming: Gucci x Genies.

Users can outfit their Genies with 200 pieces from the Italian label’s real life collection. And choose from a number of Gucci-themed actions via the Gucci Wheel. It’s estimated that 65% of the app’s users have their Genies wearing Gucci digital products.  And aytime users mention things like Rodeo Drive, luxury, Milan, gold and other fashion-related keywords in chats? Genies rains Gucci-branded items down on their conversations.

the best films made by luxury fashion brands

Burberry’s newest cult product isn’t a trench, “it” bag or a pair of shoes – it’s a game.  But before you brush it off as another gaming app you won’t play or download, think again.

The luxury fashion brands in partnership with a game developer for virtual reality (VR) and gaming: the new B Bounce Burberry. Courtesy Photo.

Launched last week, Burberry B Bounce is a simple game on the brand’s website (no download necessary). In it, you race a Burberry-clad deer (the animal beloved by creative director, Riccardo Tisci) to the moon, winning points and prizes like custom GIFs and virtual products along the way.  Before you get playing though, you must first choose a Burberry coat for the deer to compete in. And if you’re lucky, you might end up winning the coat, too.

The luxury fashion brands that are into virtual reality (VR) and gaming: the new B Bounce Burberry. Courtesy Photo.

The first prize is a real coat from the new Burberry puffer collection, available to players in the UK, US, Canada, China, Japan and Korea. Word to the wise – this one is harder than it looks.

Launching in early 2020, the gaming app Drest is from Lucy Yeomans, a former magazine editor and Net-a-Porter alumnus.

Drest invites players to dress up a model (it’s rumored the app is in the midst of contracts with numerous supermodels) in clothing and accessories from current collections of more than 100 brands, including Gucci, Prada, Stella McCartney, Valentino and Burberry.

The luxury fashion brands that are into virtual reality (VR) and gaming: The forthcoming Drest app. Courtesy Photo.

The looks – plus hair and makeup – are paid for using in-game currency. The final look is then released to the wider user community for rating.  On top of that, if users are happy with their final products, they can click through to purchase the model’s outfit in real life via Farfetch, the e-commerce site with which Drest has formed an affiliate partnership.

The luxury fashion brands in partnership with a game developer for virtual reality (VR) and gaming: the forthcoming Drest app. Courtesy Photo.

Similar to Drest is an app coming next year called Ada. Named after Ada Lovelace, it’s the brainchild of co-founders and fashion insiders Alexia Niedzielski and Elizabeth von Guttman, along with Andy Ku, a Korean gaming guru.

The luxury fashion brands that are into virtual reality (VR) and gaming: The Ada app, coming in early 2020. Courtesy Photo.

While the app focuses on styling and clothing, Ada also includes a luxury interior design component, allowing users to choose from a series of 3D luxury interiors. Like an apartment filled with Armani/Casa furniture. Or a luxury brand-sponsored pop-up shop.

After users dress up their 3D avatars (which can be tailored to their size) in the likes of Prada, they take a series of shots to share on social media or with friends. And like Drest, users will be invited to purchase their digital clothes directly from the 20 brands who have already signed up. To date, those brands include Dior, Gucci, Prada, Armani, Balmain, Miu Miu, Christopher Kane and Mary Katrantzou, among others.

The luxury fashion brands in partnership with a game developer for virtual reality (VR) and gaming: The Ada app, coming early 2020. Courtesy Photo.

The clothing collections released in the game will be released as they are in the real world, meaning if only 500 of a particular style of Prada jackets are being made, there’ll only be 500 in the game world.  So getting a rare piece will give you some serious digital bragging rights.

So what do you think readers?  Will you be logging in and creating the closet or your dreams?  Or will you be sticking to things you can actually wear IRL?  While apps like Drest and ada seem like the game of my teenage dreams, only time will tell if they are the game of everyone else’s current dreams.