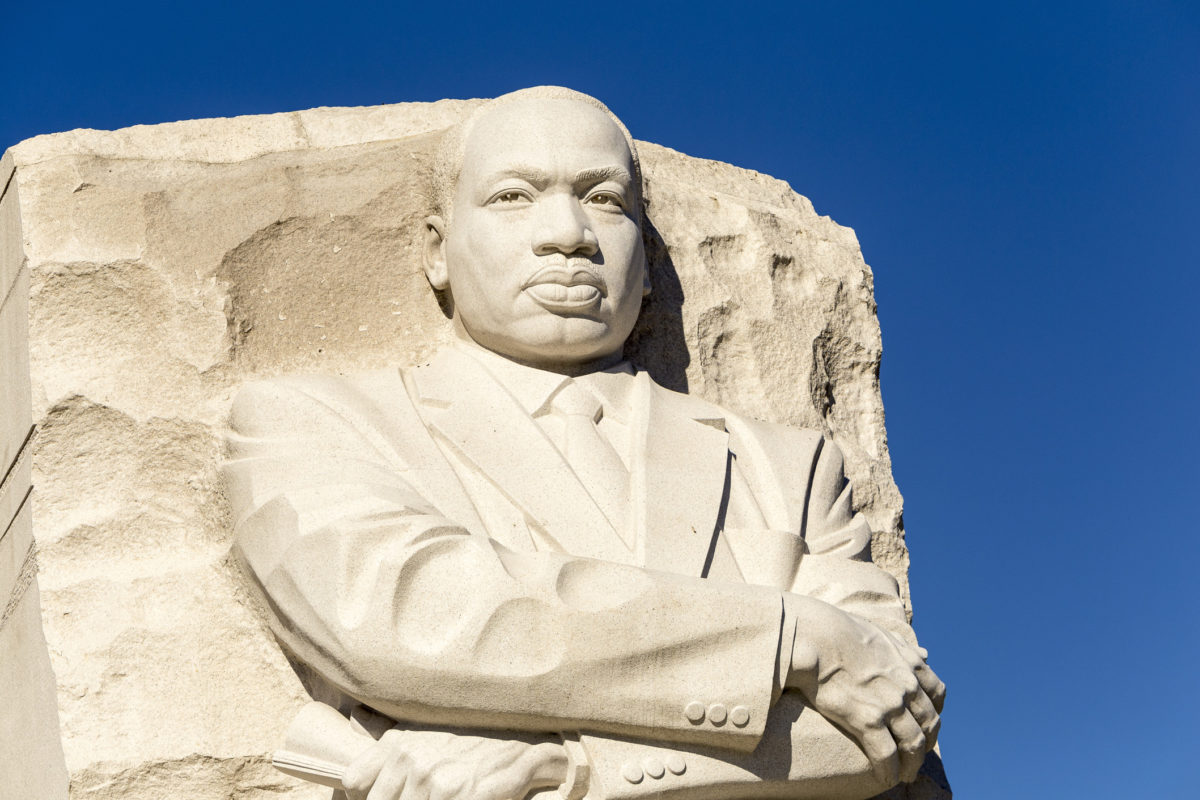 Where are the best places to travel to spend Martin Luther King Day if your goal is to honor the meaning of the holiday and the legacy of Dr. King? We’ve shared some thoughts on the best books to read to mark the occasion. We’ve previously reported on monuments, museums, and other ways to experience and celebrate the spirit of the civil rights movement and its leader. Here are our recommendations on the best places to travel for Martin Luther King Jr. Day (MLK Day) this year.

the best places to travel for MLK Day this year

The splendid National Museum of African-American History and Culture receives rave reviews, as does its restaurant, the Sweet Home Cafe. Visit the Lincoln Memorial and the Dr. Martin Luther King Jr. Memorial.

Be sure to see the monumental work from artist Mark Bradford, Pickett’s Charge, at the Hirschhorn Museum from now until 2021. And the portraits of Former President Barack Obama and Former First Lady Michelle Obama at the National Portrait Gallery are a must-see. For a luxurious experience right in the center of everything, stay at the Hay-Adams or the Willard.

The best places to travel for MLK Day: the National Museum of African American History and Culture. Courtesy Photo.

Arguably the birthplace of the civil rights movement, Atlanta is where you can visit the Martin Luther King Jr. National Historic Site and see the house where Dr. King was born. The historic Ebenezer Baptist Church, where he preached for many years, is a short walk away.

The Center for Civil and Human Rights, the Botanical Garden, and the campuses of the historically black universities Morehouse and Spelman would be good stops, too.

We always stay at the Four Seasons in Midtown, but The Whitley (formerly the Ritz) in Buckhead is also very good. Every great holiday has its own special food, and in Atlanta you have the best soul food options imaginable to choose from. We love Paschal’s, run by our friend Sylvia Russell (and don’t feel obligated to restrain yourself to the usual “meat plus two” – have three side dishes! It’s a holiday).

The best places to travel for MLK Day: the Fountain at Centennial Olympic Park in Atlanta, Georgia.

3. The slave fortresses of Ghana

With the capital city of Accra as home base, a 2-day trip on the coastal highway toward Abidjan, Cote d’Ivoire will allow you to experience the infamous Gold Coast, where once there were over 50 “castles” and forts where black slaves were put on ships bound for the U.S.

The imposing St. George’s Castle in Elmina was the African headquarters of the Dutch West Indies Company; at its peak it exported 10,000 slaves per year. Cape Coast Castle is about 30 miles away (this is the site the Obama family visited in 2009).

Fort William, in nearby Anomabo, is the only coastal structure still standing that was built for the sole purpose of exporting slaves; its Door of No Return is a vivid reminder of all that occurred there.

The best places to travel for MLK Day: the Cape Coast Castle in Ghana.

While it may be better-known for pink sand beaches, shorts, golfing, baby-moons and sea glass, the island nation of Bermuda has played a vital role in the history of the African diaspora. Roughly 60 percent of Bermudians are of African ancestry; many are descendants of West Indian and West African slaves brought to the island during the 18th century.

Today, the island’s African Diaspora Heritage Trail been officially designated by UNESCO as part of its global Slave Route Project. We walked part of it on a recent trip to Bermuda, and it was an incredibly moving experience.

Sites on Bermuda’s black heritage trail include the National Museum of Bermuda, where visitors can examine artifacts related to the trans-Atlantic slave trade. And the Bermuda Heritage Museum, which highlights the many accomplishments of Black Bermudians in various fields.

Cobbs Hill Methodist Church was built by slaves by moonlight; St. Peter’s Church is the oldest Anglican church where a historic slave graveyard is still intact. Nearby Cobbler’s and Gibblet Islands are where slaves were punished and executed; many artifacts on these islands have survived virtually untouched.

This Trail is one of Bermuda’s most lovely hidden gems. If you go, we love staying at the chic boutique hotel The Loren at Pink Beach. If you prefer to be in bustling Hamilton, the Fairmont Hamilton Princess is wonderful, too.

There are so many great choices in the city, you’ll be hard-pressed to experience them all. Make a trip to Harlem, and visit the Schomburg Center for Research in Black Culture. Worship at Abyssinian Baptist Church, the first African-American Baptist church in New York State. While the main building of the Studio Museum in Harlem is closed for renovations while a new design from architect Sir David Adjaye is completed, there are still great exhibits to see in their temporary quarters. Round out your great day in Harlem with a meal and a swanky night out at supper clubs Minton’s or Red Rooster.

Elsewhere in the city, visit the African Burial Ground National Monument downtown. Head to Jazz at Lincoln Center or (Le) Poisson Rouge and listen to some music created by black Americans. For pure luxury, stay at the Whitby, the St. Regis or the Mark.

The Motor City is our home town, and it has many important ties to the civil rights movement, including being the home of Rosa Parks. The city is on the upswing, so this is the perfect time to go.

While you’re there, visit the Charles H. Wright Museum of African-American History (the current exhibits include one on black achievements in science and tech). See Second Baptist Church, a stop on the Underground Railroad and the oldest black church in the Midwest. Stop by the Motown Museum, site of the recording studios of Berry Gordy and Motown records.

While you’re in town, you have to visit the Detroit Institute of Arts to see the famous Diego Rivera murals. Chic places to stay? The Siren Hotel, the new Shinola Hotel, the Westin Book Cadillac, or the boutique Aloft Hotel at the David Whitney.

Where to spend Martin Luther King Day: the Detroit skyline.

The Windy City was the end-point of the Great Migration; it’s the home town of poet Gwendolyn Brooks. Several iconic black-owned businesses got their start here: four major insurance companies, Oprah’s Harpo Studios, and Johnson Publishing were all born in Chicago. The Chicago Defender was the preeminent black newspaper in its day; three of the six black Senators elected since Reconstruction were from Chicago. It’s the place where Barack Obama’s Presidential Library will ultimately stand.

For now, you can visit the DuSable Museum of African-American History. Listen to jazz at the same clubs where Louis Armstrong played; and see Grant Park, where President-Elect Obama spoke on election night 2008.

The Conrad Hotel is a good lodging option. And you cannot go wrong with the Four Seasons, the Park Hyatt, or the Ritz-Carlton.

heritage and honor at the museum of the African diaspora

You might be surprised to learn how much there is to see and do in a city not best-known for its role in African-American history.

In the center of San Francisco you’ll find a spectacular monument to Dr. King that will literally take your breath away. At the Museum of the African Disaspora, the traveling exhibition Black Refractions: Highlights from The Studio Museum in Harlem will be on display until April 14, 2019.

At the de Young Museum of American art from now through April 1, you can catch Revelations: Art from the American South. The exhibit features 62 contemporary works by African-American artists from the southern United States that were recently added to the museum’s permanent collection.

Willie Mays Plaza is home to 24 palm trees (a homage to his jersey number) and a nine-foot bronze sculpture of the Hall of Fame center fielder. Leidesdorff Street is named after William Alexander Leidesdorff, a black man originally from the Virgin Islands who became a prominent businessmen and built the city’s first hotel.

For a truly luxurious stay, The Four Seasons hotel is right in the center of everything you’ll want to see.

Head to Memphis to visit the National Civil Rights Museum. Located at the Lorraine Motel, where Dr. King was murdered, it’s an incredibly powerful and moving experience that will stay with you long after you leave. The Peabody Hotel is charming (don’t miss the duck parade in the lobby).

The newest and possibly the most arresting place to visit this Martin Luther King Jr. holiday is the National Memorial for Peace and Justice in Montgomery, Alabama. Opened in spring 2018, it’s a stunning museum dedicated to the memory and legacy of enslaved and terrorized black people in America. Inspired by the Holocaust Memorial in Berlin and the Apartheid Museum in Johannesburg, this is a sober, meaningful site where people can gather and reflect on America’s history.

The grounds and the museum itself are filled with sculptures and wrenching testimonials. The centerpiece is the memorial square. There, visitors walk past and underneath 800 six-foot weathered steel monuments hanging from the ceiling. There is one for each county where a lynching took place in the US.

The Legacy Museum, a companion site to the Memorial, is just a short walk away. It’s housed in a warehouse in what was once Montgomery’s sprawling slave market. The museum addresses the contemporary issues of criminal justice reform, voting rights, and equal opportunity. At the end of a visit there, the institution points visitors toward the future. Prominently sited beside the exit is a voter registration kiosk.

Where to spend Martin Luther King Day: the National Memorial for Peace and Justice in Montgomery, Alabama.

the best places to travel for MLK Day this year

Those are our personal top picks for the best places to travel for Martin Luther King Jr. Day this year. Wherever you decide to mark the occasion, we hope it’s moving and meaningful.