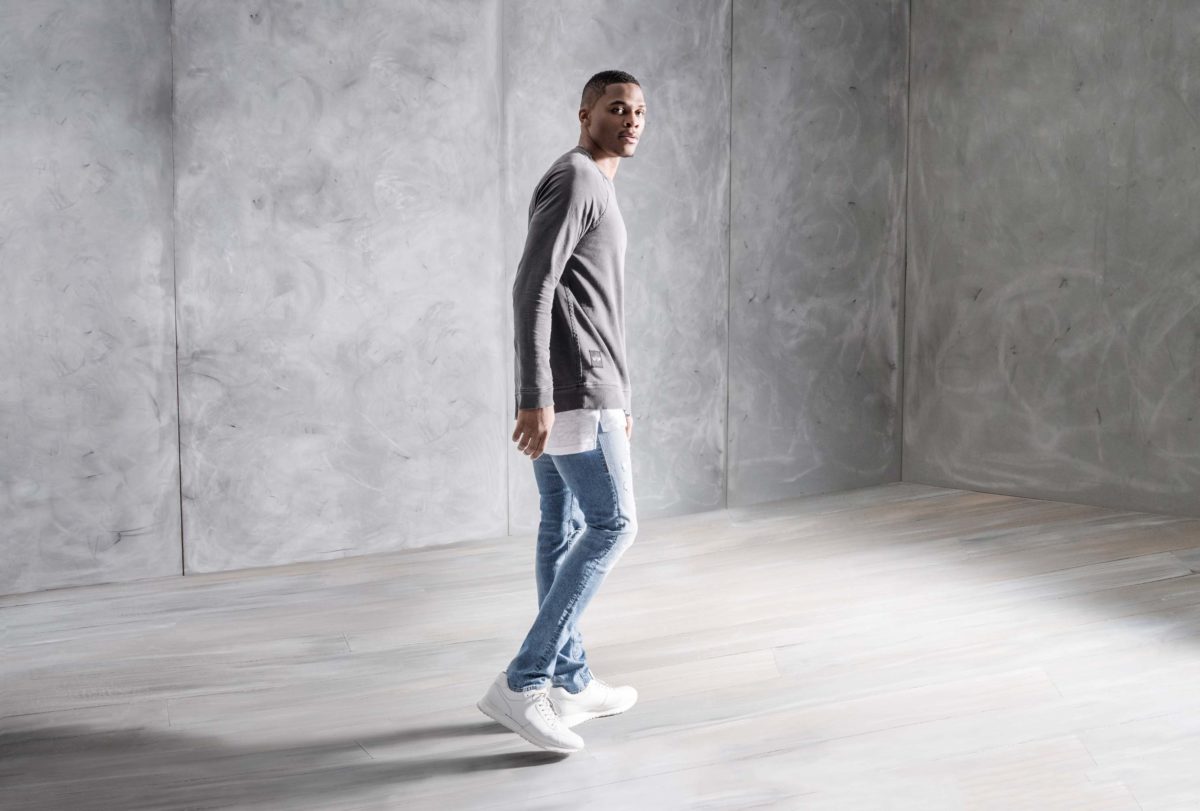 Style influencers, fashion-savvy gentlemen, and sartorial All-Star players of the basketball world. Yep, we’re talking about Russell Westbrook, LeBron James, James Harden and their peers. You probably already know that pro basketball and luxury fashion have been having an ongoing and mutually-beneficial love affair for several years now. But who are the best-dressed NBA players of all? Our ace correspondent Julie Chang Murphy ranks the MVPs of style in the NBA right now.

If you follow fashion, chances are you’re aware of the NBA’s deep bench of sartorial All-Stars – even if you don’t know the difference between a point guard and a shooting guard.

NBA style superstars are sitting front row at major fashion shows, attending the MET Gala, working on their own collabs, and being photographed for pre-game arrivals in “the tunnel” and on the street at Paris Fashion Week.

a new field of competition: the red carpet

Naturally, for a group of professional athletes, competition is in their blood. And the off-court fashion game has evolved into a competition of being the best dressed baller. It’s big business, as the savviest athletes carve out their brand identity alongside the assistance of stylists and fashion designers who help dress their impossibly tall and sleek frames. Which, we might note, are ideal for the catwalk and for designer clothes.

the best of the red carpet from the golden globes 2020

it started with a mandatory player dress code

As we profile the most stylish NBA icons today, you might be surprised to learn that this marriage of sport and style actually emerged out of a dress code established in 2005 by the late NBA commissioner David Stern.

Informally referred to as the Allen Iverson rule, it banned hip-hop staples like baggie pants, oversized tanks, t-shirts, and even chain jewelry and medallions worn over a player’s top. Instead, players were required to don business casual attire and dress shoes when arriving at NBA games or at press conferences. Yawn.

The NBA players with the best fashion sense: Chris Paul.

At the time, Marcus Camby joked that he did not have an issue with the league rules as long as the players received a clothing allowance. However, many viewed the new rules as racially-biased – a rejection of popular black culture and another way to control the players in every element of their professional lives.

players make the rules their own

Fast forward to today. The rules still exist, but are no longer enforced. And in the interim, elite black basketball stars took what was meant to be a constraint and turned it into a means of personal expression.

They found designers and looks they loved that were insouciant, fashion-forward, unique and expressive. Fans embraced the idea, clamoring for more just as movie fans lap up the latest from the Hollywood red carpet.

Now, brands and designers clamor to dress and collaborate with NBA stars just as they do with leading actors. The men of the NBA have established themselves as culturally relevant trendsetters off the court. And they’re bringing much-needed diversity to the fashion world. Best of all? They’ve made following sports a lot more interesting for all of us.

a new (or perhaps broader) definition of masculinity?

We’ve written previously about the new codes of masculinity that are emerging in Western culture. The rise of makeup for men, purses for men, and many other luxury accouterments that were once reserved for women. The men of the NBA, along with others in entertainment, music and the arts, are re-writing the old tropes and creating something brilliant, and new and liberating.

Russell Westbrook of the Houston Rockets in the front row of the Givenchy show in Paris.

No small amount of credit goes to these dudes for showing us that male energy and masculinity can take lots of different forms. And that being an athlete and an aesthete at the same time is not only possible, but perhaps even desirable.  If you want to change the world, you first need to be seen, right?

how luxury brands are embracing new codes of masculinity

Here are the top NBA style icons that inspire us with their creativity and confidence (Editorial note: the trade deadline is nearly here, so all team names are as of this posting).

At the top of everyone’s list (GQ, Esquire, Hypebeast and Sports Illustrated) and ours, too, is Houston Rockets’ guard, Russell Westbrook. He owes his quirky and fearless style to his own imagination and creativity, preferring to work without a stylist.

He is front row royalty at shows like Louis Vuitton and Dior Homme. And as a testament to his fashion prowess, Westbrook has created several capsule collections for the dearly-departed Barneys. Whether he’s wearing leopard print, Tom Ford or a distressed vintage tee, his unconventional style is unrivaled.

Harden is instantly recognizable with his signature beard and daring ensembles. He favors a singular and bold style from designers like Dries Van Noten, Neil Barrett and Marni.

Neon, bright florals, and head to toe looks are carried off with aplomb but these fun looks belie his seriousness about fashion and his personal ambition in the industry itself. He’s collaborated with Y-3 and Adidas and wants to “reduce the space that can be between sport and fashion” to “create a different culture for all.”

TWIST: what you need to know to talk sports

Formerly of the Houston Rockets and the LA Clippers, Chris Paul is another standout not only for his elevated streetwear style. But also for using fashion as a platform for social and political commentary.

What can’t this guy do? Multiple MVP winner, founder of the I Promise School, Beats headphone investor, and a sharp dressed man.

This NBA veteran leans towards bespoke suits for his 6’9” frame and a more polished and sophisticated look than his younger counterparts. Last year, James launched a sleek and minimalist travel-friendly clothing collection called Hôtel, sold exclusively at UNKNWN.

what you need to know about expensive luxury sneakers

We always look forward to Golden State Warrior forward Draymond Green’s posts of his outfits from the cement corridor for Fashion Fridays on his Instagram.

His look is clean cut with an edginess that comes from an unconventional color, bold prints or innovative tailoring. Last summer, Green was one of the initial investors in fellow Flint, Michigan native and designer, Kiara Tyler’s high-end unisex street wear brand Kalm Clothing.

The sun shines brightly on this Phoenix Suns forward in spite of his goth leanings. He rocks Rick Owens, Saint Laurent and Givenchy as if he were on the runway.

and this former Esquire fashion intern and CFDA ambassador is quoted as saying, “I love fashion as much as I love basketball.” Oubre is currently working on a creative partnership with Converse as it makes its foray back into the pro basketball space.

the ultimate luxury gift guide for him: best for men

You’d expect a New York City based team to have serious fashion cred and DeAndre Jordan of the Brooklyn Nets certainly represents.

He admires vintage clothing and the history behind an item of clothing but loves mixing it up with pieces from Balenciaga, 3.1 Phillip Lim and Gucci. His accessories game- from his oversized hats, rings and bags- is always on point as well.

Even the most jaded have to smile at Toronto Raptor’s Serge Ibaka’s style. As a young child in the Congo, after his mother died and his father was imprisoned, he was forced to beg for food, clean the streets, and play basketball without shoes. Now, he’s a world champion and a style influencer, famously wearing Thom Browne and a kilt at Paris Fashion Week last year. He was also seated in the front row at Hermès, Balmain, and Kenzo.

His enviable style and immaculate good looks have him repping storied brands like Tiffany and Co., Gucci, Valentino and Balmain. Ibaka recently designed three boxer brief styles for Toronto-based Topik Wear. A portion of all sales go to his foundation, which provides health services and education to disadvantaged children all over the world.

luxury lessons: what you need to know about supercars

This Australian native and 76ers guard may be a bit of an enigma. But he describes his style as approachable and sharp.

Pre-game, Simmons usually wears track pants, ripped denim, sweatshirts and hoodies. But like his mentor, LeBron James, he always look effortlessly cool and put together. He’s been proclaimed as the heir to the King’s throne – and we think that refers to more than just his on-court performance.

Signed to the Portland Trail Blazers last November, this forward has long been a fashion trailblazer. Never one for subtlety, Anthony embraces bright, punchy colors in relaxed silhouettes.

His foray into the world of high fashion has been thoughtful and inspired. Last September, he had his second show at NYFW for his label Melo Made. He collaborated and shined a spotlight on South African brand, Maxhosa Africa. The result? Elevated and sporty knits with plenty of color inspired by African heritage and beauty.

A loyal reader alerted us to the smart, polished style of Garrett Temple. His look is neatly-tailored suits that wouldn’t be out of place at a global advertising agency or a cool law firm.

Which means that while the fashion press may not laud him in the same way that they do some of his flashier peers, dudes in the real world might want to take some cues from his choices. A range of shades of blue and grey for the suits, a slightly bolder color choice on the shirt, perfect tailoring, and no tie needed. Works for us!

the NBA players with the best fashion sense

That’s it! Our top picks for the best-dressed players in pro basketball right now. So who’s your NBA fashion MVP?