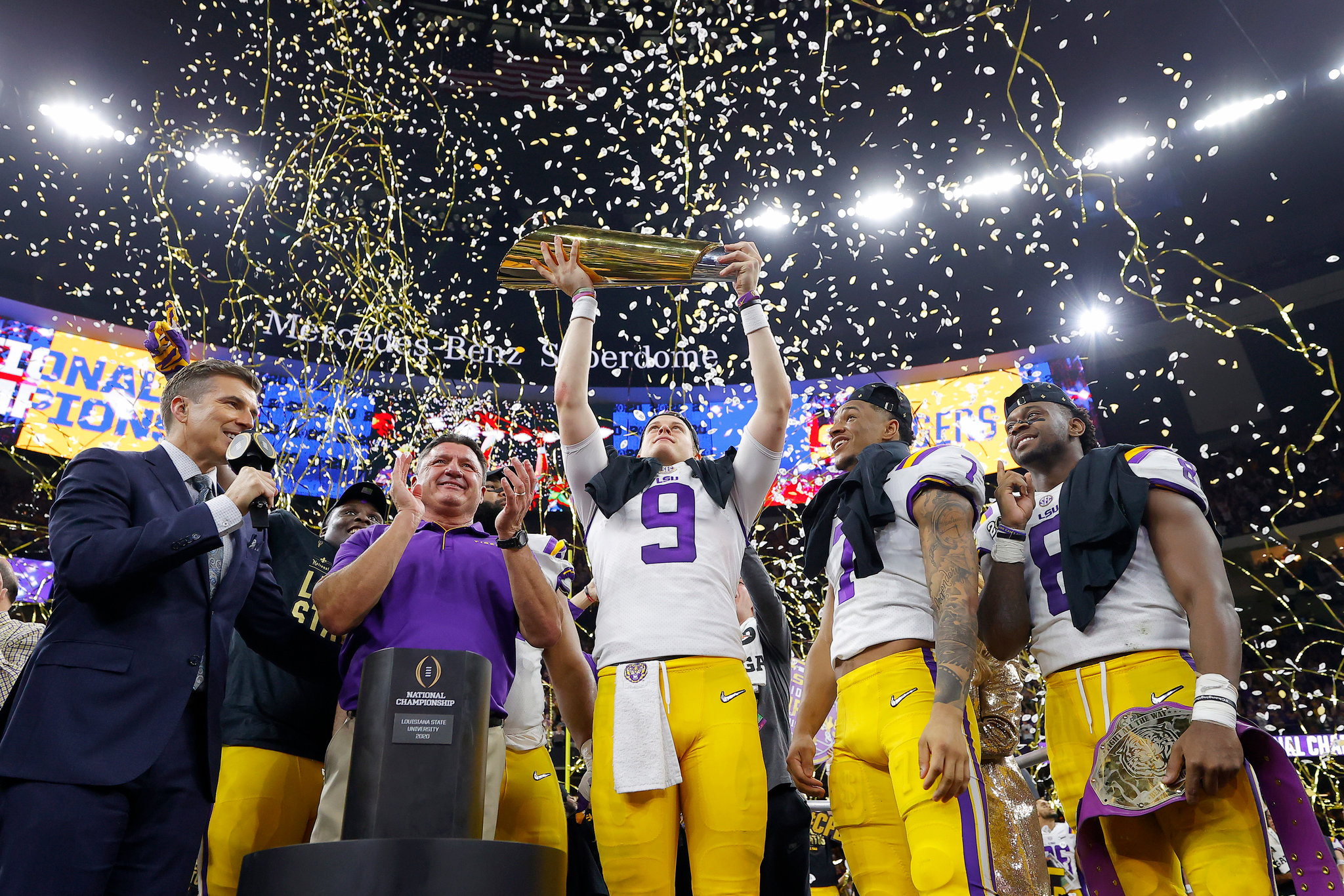 This Week in Sports Talk (TWIST) is our weekly roundup of top headlines and sports news, plus a preview of what’s up next. Heading into the week of January 19, 2020, here’s the top sports news, with a twist. Skim it, and you’ll be good to go all week.

We begin with some short takes in sports news heading into the week of January 19, 2020.

In the end, it wasn’t even close. Louisiana State (LSU), which opened the college football season as an underdog in its own division, won the national championship. The LSU Tigers beat the Clemson Tigers, the defending champions, with a decisive 42-25 victory in the Superdome in New Orleans. It was LSU’s first title since the 2007 season.

LSU quarterback Joe Burrow delivered an outstanding performance in the game, rallying from a 10-point second-quarter deficit and scoring 6 touchdowns. This was on top of an incredible season, during which Burrow threw for an NCAA record of 60 touchdowns and won the Heisman Trophy, and LSU went 15-0.

Meanwhile, Clemson fans saw their 29-consecutive-game winning streak snapped. The team was seeking its third national championship in four seasons. And before they could shake the glitter off their clothes, LSU fans had to confront the formidable obstacles their program will face next season. Within just 72 hours of this epic victory, key LSU players and coaches had already announced their departures for the NFL or other college programs. LSU will have real challenges in replicating this kind of success next season.

wait – OBJ did what?

Odell Beckham Jr (OBJ), star wide receiver for the NFL’s Cleveland Browns, created the kinds of headlines this week that might have been reasonably been mistaken on first glance as an early April Fool’s joke. If only, though. Turns out they were all true.

This week in sports talk, January 19, 2020: Odell Beckham Jr. of the Cleveland Browns.

OBJ is an LSU alumni, so naturally he was in the stands for the big College Football Playoffs National Championship Game on Monday night. First, he was filmed giving cash to players after the game ended. Authorities initially thought it was “novelty currency.” But it was real, and therefore a clear violation of NCAA rules. Heisman Trophy winner and LSU quarterback Joe Burrow confirmed that he had gotten cash from Beckham “sometime after the game.” He seems to have no immediate plans to give it back.

Meanwhile, having distributed his wad of cash, OBJ then joined the festivities in the LSU locker room. Whereupon at some point, he allegedly slapped the rear end of a male security officer. The officer filed misdemeanor battery charges, and at one point there was a warrant out for Beckham’s arrest in the state of Louisiana.

Word came yesterday that the charges had been dropped. Whew! This whole scenario reminds us of the Katy Perry song “Last Friday Night.”  You know, the part where she sings “Ripped my favorite party dress; Warrants out for my arrest; Think I need a ginger ale; That was such an epic fail.”

who are the best-dressed players in the NBA right now?

Coco and Venus to meet again

Coco Gauff will take to the court for her third Grand Slam tennis event when the Australian Open commences tomorrow. And thanks to the draw, in the first round Gauff, 15, will meet Venus Williams, 39, just as she did in the first round of Wimbledon 2019. Gauff became an international sensation when she won that match.

Cori Gauff and Venus Williams at the end of the first round of the Championships, Wimbledon on July 1, 2019.

Other story lines at the Open include Serena Williams’ ongoing quest to tie the women’s record set by Margaret Court, who won 24 Grand Slam singles titles. On the men’s side, Rafael Nadal, Novak Djokovic and Roger Federer have combined to win the last 12 Grand Slam events. Will this season be the start of a generational change? And finally, the bushfires that have ravaged Australia continue to burn in some places, and depending on the wind direction, the smoke and ash could affect the players. Tournament organizers have vowed to keep the event on schedule but that may not be possible.

Top Sports Headlines heading into the week of January 19, 2020

Now that we’re warmed up, here’s everything else you need to know about sports heading into the week of January 19, 2020:

Last week, the Seattle Seahawks lost to the Green Bay Packers, 28-23, despite a valiant attempt at a last-minute comeback by quarterback Russell Wilson.

And in an even more eventful game, the Kansas City Chiefs beat the Houston Texans. Some commentators described it as “like 5 games in one.” The Texans pulled out ahead by 24 – 0 by the middle of the second quarter. But the Chiefs came all the way back to win 51 – 31. It was one of the biggest comebacks in the NFL postseason in history.

The Kansas City Chiefs host the Tennessee Titans this afternoon. This evening, the San Francisco 49’ers host the Green Bay Packers.  The Chiefs and 49’ers are the favorites. The winners will meet in Super Bowl LIV in Miami on February 2, 2020.

what can we learn about life from this year’s Super Bowl?

Speculation is now running high about where Joe Burrow will be signed in the upcoming NFL Draft. As the presumptive number one draft pick, it’s almost certainly going to be to the Cincinnati Bengals. Although some Pats fans are murmuring that maybe New England will find some way to trade Tom Brady in exchange for the number one draft pick.

This week in sports talk, January 19, 2020: Press reports are that Tom Brady and his family have moved into this home in Greenwich, Connecticut.

Of course, Brady’s a free agent, and can’t be traded. The press reported that this week, Brady and his family officially moved from Boston to Greenwich, Connecticut. Although there seems to be a lot of confusion about the veracity of this reporting – did they or didn’t they? There are also reports that the couple has cleared out of their box in Gillette Stadium. Who knows what will happen next? Is this real, or a negotiating strategy? Watch this space for further updates.

As the All-Star voting continues, the Milwaukee Bucks (38-6) and LA Lakers (33-8) continue to dominate the NBA.

The Bucks’ Giannis Antetokounmpo (aka “The Greek Freak”), the reigning MVP, is on fire. He’s posting the kind of performances not seen since Shaq O’Neill’s MVP year. As of this posting, Antetokounmpo is averaging 30 points per game; 12.7 rebounds; and making 33.2% of his three-pointers.

Number one draft pick Zion Williamson is getting ready to play in New Orleans after missing the first months of the season due to injury. It may be time for him to get back to work – he was caught falling asleep on the bench during a recent game.

Williamson has always been a Big Man, and he has reportedly gained 8 pounds of muscle from working out in his recovery period, so it will be really interesting to see how he does on his return.

Louis Vuitton and the NBA are reportedly about to unveil a new partnership as part of Haute Couture Week in Paris. The French fashion house has sent out a save-the-date for a cocktail party on Wednesday January 22 at its flagship on Avenue Montaigne in Paris. The invite features the outline of a basketball court with the LV initials in the middle. As we’ve previously reported, NBA players have become serious fashion influencers. This seems like the logical next step.

This week in sports talk, January 19, 2020: Louis Vuitton is planning a collaboration with the NBA and will announce it in Paris this week.

And expect the days leading up to the February 6 NBA trade deadline to be busy as teams make moves to position themselves for the post-season.

It may be the off-season, but a major scandal in Major League Baseball has dominated the sports headlines this week.

After an investigation, earlier this week the MLB fined the Houston Astros $5 million and the loss of several draft picks for stealing signs from their opponents during the 2017 season (the one in which they won the World Series). The unfortunately-named “Banging Scandal” took place when players used electronic equipment to read the hand signs of the opposing pitcher, and then banged their bats on the lids of garbage cans to signal to their batter what pitch was coming.

No, we are not making this up.

Heads began to roll immediately following the release of the report. The Houston Astros fired their General Manager Jeff Luhnow and their Manager A.J. Hinch after the league ordered suspended them for one year.

The two masterminds from the 2017 Astros season were then-bench coach Alex Cora and then-player Carlos Beltran. Cora was fired from his position as Manager of the Boston Red Sox. And Beltran has stepped down from his new job as the Manager of the New York Mets. Beltran had just been hired, and he’s now gone before the season has even started.

This week in sports talk, January 19, 2020: Carlos Beltran has stepped down as New York Mets Manager.

Cora is likely to face additional penalties from the league, due to electronic sign stealing that he apparently also fraudulently employed during his tenure with the Red Sox. He could be a facing a one-year plus suspension or even a lifetime ban.

All the teams the Houston Astros defeated in 2017 and 2018, particularly the New York Yankees and the LA Dodgers, are furious. Some note, of course, that the Yankees have their own skeletons in the closet. They won the 2009 World Series with Alex “A-roid” Rodriquez carrying the team on his back for most of that season, including the playoffs.

That’s it. You’re good to go with the top headlines and coming attractions heading into the week of January 19, 2020. Have a good one, and see you next week.