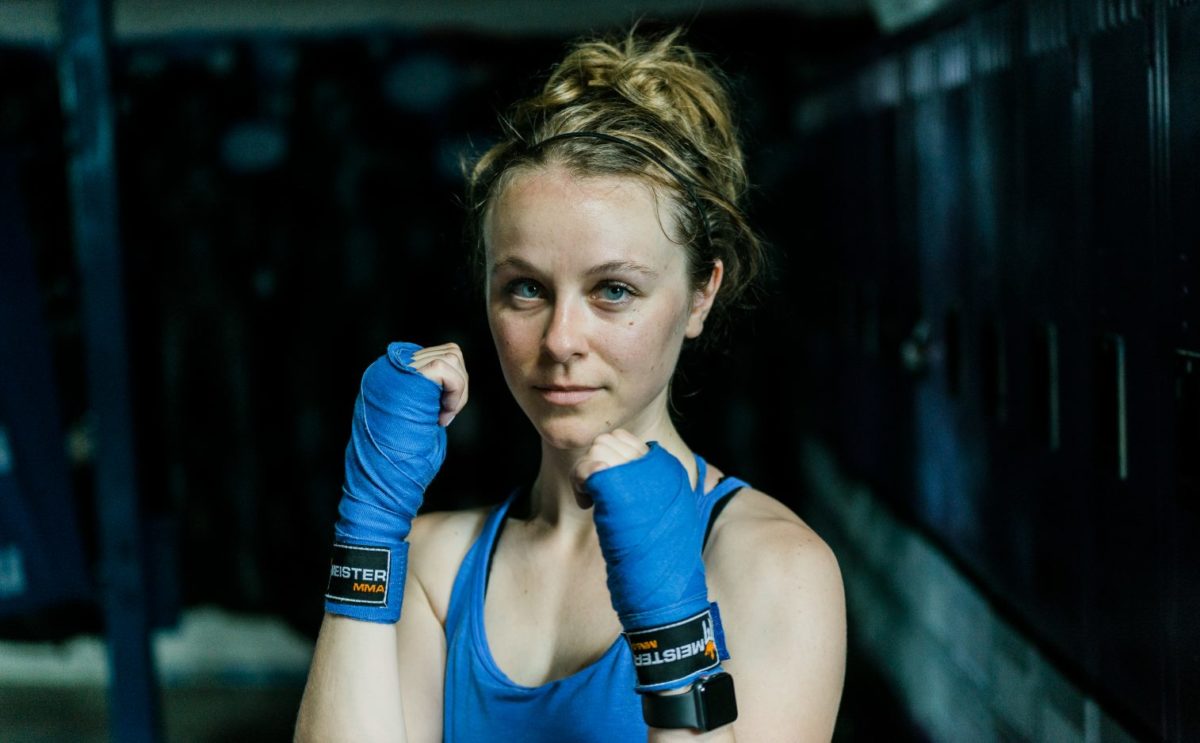 Sparklers is a monthly series that highlights those spreading light in the world. We’re celebrating good deeds and those who choose to shine in January 2020. This month we’re recognizing Haymakers for Hope, a charity organization that gives people the opportunity to fight back against cancer – literally. Our correspondent Jillian Tangen shares the inspiring story of Haymakers for Hope and the organization’s innovative approach to raising money for cancer research.

Every day, people choose to shine in ways large and small. These moments of grace and generosity don’t always get reported on, and unfortunately, they can be quickly forgotten. So we’re celebrating good deeds and kind acts in January 2020. Because sometimes good news and kindness are the sweetest luxuries of all.

Each month, we shine a light on an organization or an individual spreading light in the world. Our Sparkler for the month? This January, we’re celebrating the good deeds of Haymakers for Hope. For packing a serious punch in the fight against cancer, hats off to Haymakers for Hope.

the january sparkler of the month: haymakers for hope

As the first month of the new year begins to wind down, you may find yourself struggling to keep up with those 2020 goals you set at the end of 2019. And that’s okay – we are too. Believe it or not, putting down that phone has been a little bit harder than we thought it would.

the December sparkler of the month: Bombas socks

And that’s why for this month’s sparkler, we decided to celebrate an organization that may help to inject your mid-January slump with a much needed jolt of inspiration.

Whether you’ve resolved to get in better shape, give back to your community or just spend more time with the people that matter, we are sure the story of Haymakers for Hope and its fight against cancer will leave you feeling inspired to conquer your goals.

Haymakers for Hope began in the fall of 2009, when co-founders Julie Anne Kelly and Andrew Myerson embarked on a grueling training process to compete in the New York City Golden Gloves competition. Julie was the defending champion in the women’s 132-pound division and was looking to defend her title. Andrew was competing to try and win his first trophy.

the November sparkler of the month: Chef Jose Andres and World Central Kitchen

As the two began their journey, they realized that the training timeline for boxing was very similar to running a marathon, about four months. They also realized that many people who decide to train for marathons do so to raise money and awareness for causes that they care about. So why couldn’t they do the same with boxing?

Both had causes meaningful to their hearts. Julie is a Hodgkins Lymphoma survivor. and Andrew lost a close friend to the same disease.

That was when the duo decided that the severe physical, mental and emotional test of competing against the country’s best amateur boxers was not enough. They also wanted to raise money for cancer research. So they created Haymakers for Hope (H4H) to literally fight for a cure.

Today, H4H gives everyday people the once-in-a-lifetime opportunity to compete in a sanctioned boxing event while also fighting for a cause they care about. Participants are not allowed to have any official boxing match experience prior to their training and eventual match. Only an interest in changing not only their own lives, but the lives of others by raising money to support a cancer organization of their choice.

the sparkler of the month for October: trick or treat for UNICEF

Interested participants fill out an application on H4H’s website. Applications for specific events such as the upcoming Rock N Rumble X Boston close 6 months before the fight dates so that participants have ample time to both train and fundraise.

If selected, H4H matches boxers based on USA boxing requirements of age and weight, previous athletic or boxing experience and commitment to knocking out cancer. Then the fighters embark on a strenuous 4-month training program to prepare for their first-ever boxing match.

Fighters are assigned a local gym and trainer to track their progress every week, making sure they’re progressing at the same pace as their opponent who is also training and fighting to raise money for cancer.

In addition to their training, participants raise money before the event for a specific cancer organization of their choice. When fight day comes, the crowd is full of about 1,200 family members, friends, volunteers, training partners, coworkers and fight-night lovers.

the sparkler of the month for september: SmartWorks

Last year alone, Haymakers for Hope hosted 5 boxing events with 150 boxers across 4 cities, raising $3.75 million in funds to be spread across 50 organizations that combat cancer. Since its formation 10 years ago, H4H has raised a total of $11.5 million, all of which goes towards cancer research, care and survivorship. Meaning new trial studies can be launched. And more funding is available to support cancer patients and families who cannot afford the care they need.

We applaud Haymakers for Hope for empowering organizations with the funds they need to win in the battle against cancer. And also for empowering the fighters themselves. They dedicate their personal time preparing for fights, so that they can help others fight. Their punches carry some serious impact. And just like that, our 2020 New Year’s resolution doesn’t sound quite so daunting anymore.

We’ll highlight one new Sparkler every month. If you’d like to nominate a person or organization, send us your suggestions!

In the meantime, we’ll take inspiration from those who choose to shine as we head into a new month. Let’s work to make it brilliant.

Jillian Tangen is the Head of Research at Dandelion Chandelier. Formerly, she was a Senior Research Analyst at McKinsey & Co and Analyst at Shearman & Sterling. She is an avid fan of Nordic design, having owned an independent lifestyle store and sales agency focused on emerging Scandinavian design. Jillian lives in NYC and is married with three young children. She loves cross country skiing, the New York Rangers, reading, travel and discovering new brand.