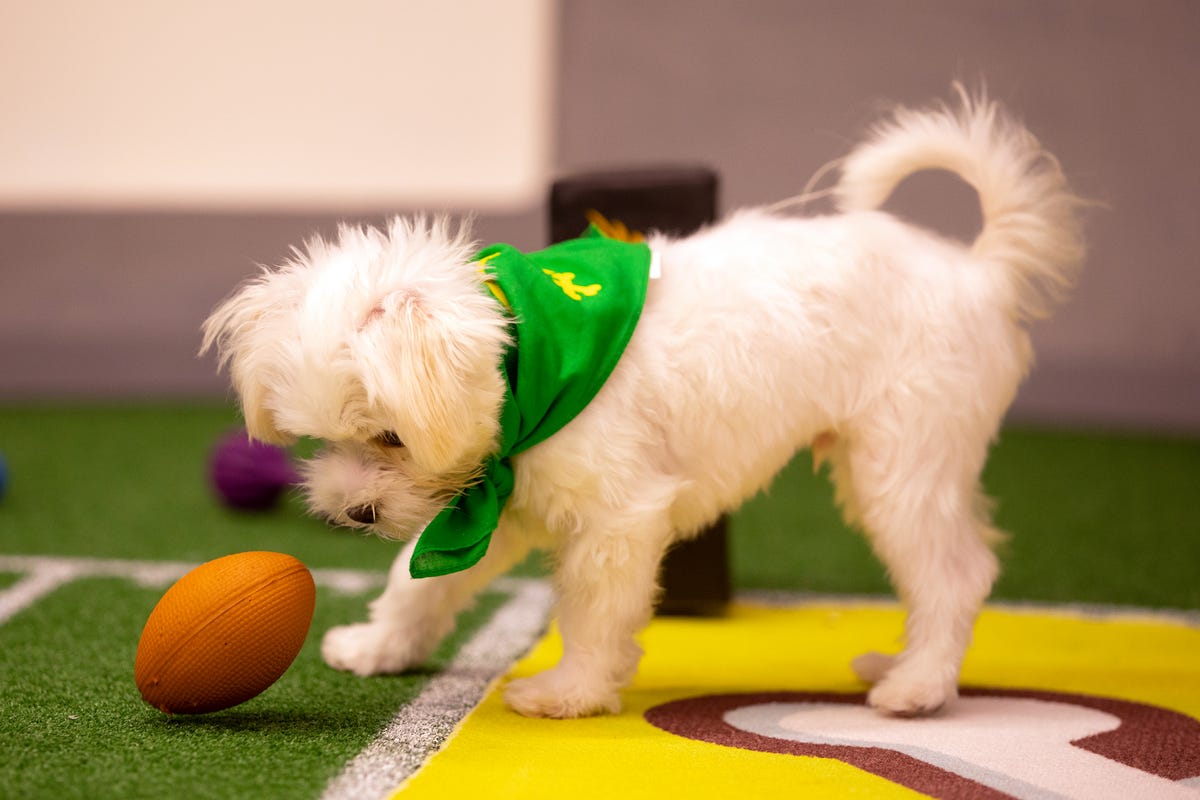 We all know that there are two kinds of people in the world. Those who really want to watch the Super Bowl. And those who really don’t. If you happen to be among the latter, read on. There’s a world of great entertainment available on Super Bowl Sunday that has nothing to do with football. We swear. What’s the best football-free TV and other entertainment to watch on Super Bowl Sunday? Our correspondent Abbie Martin Greenbaum has the rundown on what to watch instead of the Super Bowl this year.

what else other than football is on TV on Super Bowl Sunday?

It’s that time of the year again. You know the one. Everyone you know is buying beer, making bets, and sitting down to watch the biggest sporting event of the year – but you’re not totally sure you know who’s playing. Maybe you’ve never even seen a game of football before. And maybe you’re totally good with that.

Maybe when you saw the words ‘Super Bowl’ in this title, you could not have sworn with one hundred percent certainty that you knew which sport that even was.

Well, don’t worry, dear reader. We fully understand. Some of us here at Dandelion Chandelier love the whole idea of the Super Bowl, and Super Bowl parties, and all that great NFL trash talking. Our Sports Desk has been making plans since Christmas, actually.

Despite all that merriment, there’s another group of us here that have absolutely zero interest in the Super Bowl. Or professional sports. Or any sports at all, actually.

the best of the red carpet from the Golden Globes

If we were you, we’d still plan to catch the Half-Time Show – because Jennifer Lopez and Shakira are going to light the place up. But that’s your call.

Here are ten amazing choices, new and old, weird and wonderful, of what you can watch the night of Super Bowl Sunday. And there is absolutely no need to know who the quarterbacks are, or even what a Hail Mary pass is.

Even if you are a regular Super Bowl avoider, you probably already know all about the Puppy Bowl. It has run annually for 15 years before the big game, and it’s exactly what it sounds like. A bunch of adorable dogs, playing sports in a stadium, complete with commentary.

What to watch instead of the Super Bowl this year: Puppy Bowl XV. Photo Credit: Damian Strohmeyer/Animal Planet.

“Team Fluff” always meets “Team Ruff,” and there will plenty of slow-motion replays and nose-to-nose action from the water-bowl and puppy-kiss cams. If you are an animal lover who somehow missed the boat on this one, don’t make that mistake again! Puppy Bowl XVI will feature 96 adorable shelter puppies from over 25 states and four international locations. In years past, every one of the players has been adopted into a loving home following the game. (For those of you who prefer cats, there is also a Kitten Bowl!)

How to Watch: The Puppy Bowl 2020 airs Sunday, February 2. The pregame show will start at 2 p.m Eastern time. The game is set to begin at 3 p.m. Eastern time on Animal Planet.

what are the best movies about dogs?

It doesn’t get further from football than Encore! Hosted by Kristen Bell, this ABC reality TV show is every theater kid’s dream come true. It’s so ridiculously high concept we can scarcely believe it exists.

What to watch instead of the Super Bowl this year: Encore! Photo Credit: ABC/Matt Petit.

The show reunites the cast from high school musicals (as in, musicals performed by high schools, not High School Musical) around the country, and asks them to re-perform the same play, but as adults. It is a gift, and even though the episodes are being released one at a time, they are absolutely binge-able, and can certainly fill your evening with as much fanfare as any football game.

Where to Watch: Disney+

3. Anna and the Apocalypse

Did the idea of something musical get you excited, but you don’t want to watch a TV show or don’t have Disney+? Well, move over, La La Land. If you missed Anna and the Apocalypse when it graced theaters in 2017, now is your chance to make things right.

What to watch instead of the Super Bowl this year: Anna and the Apocalypse. Courtesy Photo.

This British movie is somehow simultaneously a Christmas movie, a musical, and a zombie apocalypse story all at the same time. And as if that weren’t enough, it is also an absolute delight, and has a soundtrack so catchy, you’ll find yourself listening to it all week long.

Where to Watch: Amazon Prime or Hulu

what are the best movies about female friendship?

This is maybe the best night of all to watch Jenny Slate’s stand up special Stage Fright. Of course, it is always wonderful to watch Jenny just being herself on stage, and the set is sweet and hilarious at anytime.

But there also happens to be a hysterically funny bit about football that is more apt tonight than ever.

The clear answer to the question “what to watch for a football-free Super Bowl Sunday?” is one word. Pose. Because if there’s anything or anyone that could be the antidote to a nationally-broadcast live sporting event: it’s dance, and of course, Billy Porter.

A show about the lifestyles of LGBTQ New Yorkers in the 1980’s, Pose puts a spotlight on a chosen family who are completely immersed in the ballroom scene. Nominated for several Golden Globes and Emmy’s, the drama’s first two excellent seasons are available to watch now, and would make the perfect Super Bowl alternative. And yes, there’s music.

luxury fashion brands get in the game with VR and gaming

Speaking of ballroom dancing, do you remember Strictly Ballroom? That’s right, the 1992 Baz Luhrmann film, about a ballroom dancer whose unusual dancing style brings him a lot of criticism as he competes for the National Championship.

This quirky romantic comedy is an offbeat cult classic, and could not be further from football if it tried.

If you’re getting into a new TV show, you want to be sure before committing that it’s going to be worth your time. Well, Watchmen is so good, it was even on President Obama’s list of TV shows that are “as powerful as movies.”

And yes, it’s powerful. Loosely based on the beloved comic series of the same name, Watchmen is a dystopian series with an all-star cast that asks you to think critically about the world we live in. Remixing elements of different genres to create a world that feels totally, fully realized. We live in a time with endless, excellent television shows to choose from, and this still might be the best of the best.

Where to Watch: HBO Go

the best movies about American politics and politicians

8. Sorry to Bother You

We all have that movie that we simply never got around to watching. We missed it while it was in theaters, and then new things came out, we lost track of it, we weren’t sure which streaming platform we could find it on, and we simply never found the time.

How to have a football free Super Bowl Sunday: watch Sorry to Bother You. Photo Credit: Detroit Free Press.

If Sorry to Bother You was that movie for you, the time has finally come. Boots Riley’s masterpiece starring Lakeith Stanfield and Tessa Thompson starts out as a movie about a telemarketer. And then morphs into a bizarre, surrealist piece about capitalism and… other things.  We’ll let you find out for yourself on February 2nd.

Maybe you remember the original Party of Five, which ran from 1994 to 2000 and was about a family of five children who had lost their parents in a car accident. The show has been rebooted, but updated to fit the current moment.

It is now about five children of immigrants, who are forced to stay on their own in the US, after their parents are deported. It is not always an easy watch, being about the trauma of young children, but it is one of the best-conceived revivals of a show to have emerged and would be a great way to spend your time if you aren’t interested in watching the big game.

10. Catch Up On Oscar Nominees

Oscar nominations have been released. So on Super Bowl Sunday, while everyone is at home screaming at their televisions, you can head to an empty movie theater and catch up on any contenders you may have missed.

How to have a football free Super Bowl Sunday: watch the film Parasite. Courtesy Photo.

Take advantage of everyone being distracted to grab the best seat in the house, and see some of the best cinema 2019 has to offer.

Where to Watch: A Theater Near You

don’t like football? here’s what to watch on super bowl Sunday

There you have it! A wide range of programming options that are totally football free on Super Bowl Sunday. You do you – and have a great day!