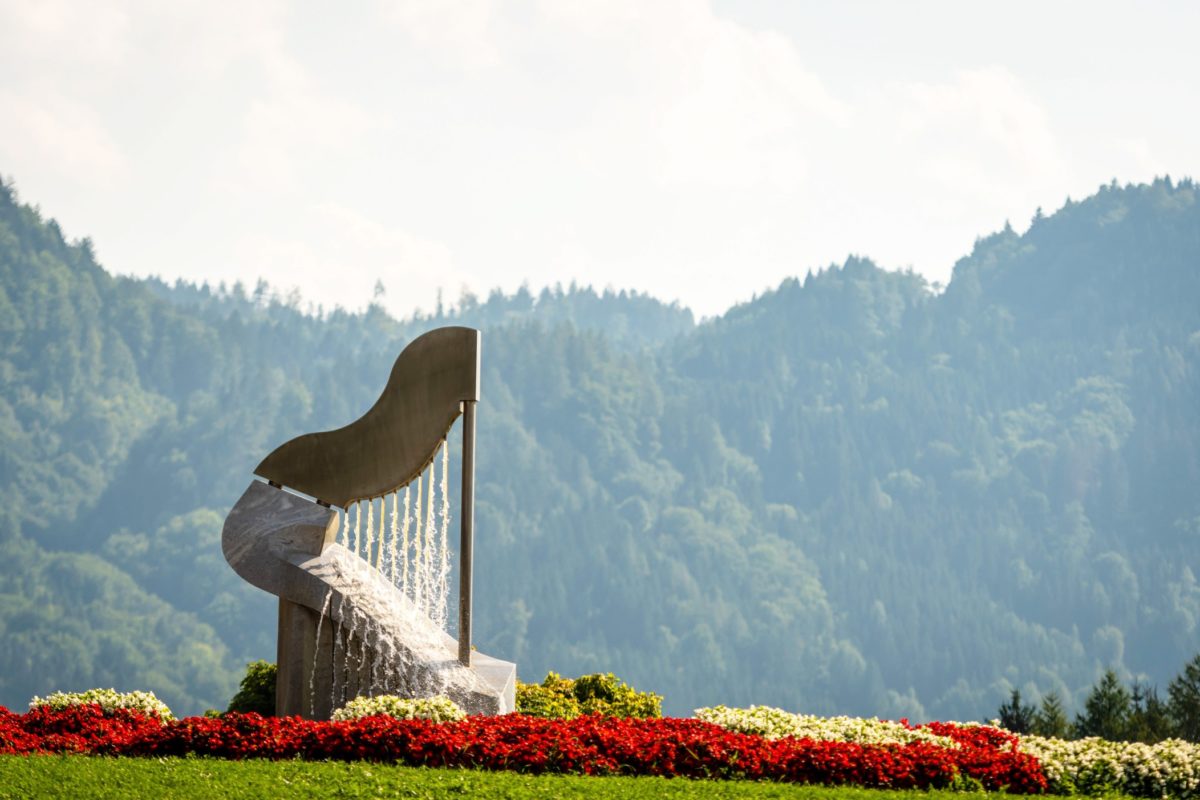 Summer music. Two of the best words in the English language. But with so many options, what are the best concerts to catch? Here’s our list of the most important summer classical music festivals and opera festivals of 2020. What to see, where to stay, and what not to miss – we’ve got it right here.

Tickets are already on sale for most of these events, some are nearly sold out, and others are just about to become available, so this is a good time to get out your calendar and start scheduling.

One caveat in this time of the novel coronavirus (COVID-19): check the website of your preferred events for updates, as all events are subject to being postponed or cancelled as the situation unfolds.

The most important classical music and opera festivals in summer 2020.

The Most Important Classical Music Festivals of Summer 2020

Here’s our list of 16 not-to-be missed 2020 summer music festivals (in chronological order) if you love classical music or opera:

Glyndebourne Festival Opera, May 21 – August 30, 2020. Held near Lewes in East Sussex under the supervision of the Christie family, this highly esteemed opera festival has taken place annually since 1934, except during the World War II years. It’s elegant, luxurious and very British. Glyndebourne is an English country house where performances were once held. Now, there is a free-standing opera house on its grounds.

The stunning opera house can seat up to 1,200 guests, and this year’s highlights include performances of Dialogues des Carmélites; Alcina; Die Entführung aus dem Seraill; and Fidelio. Performances start in the afternoon, and people arrive early, dressed in formal attire, for en plein air picnics on the extensive lawns. A long interval during the evening performances facilitates picnic dinners or a gourmet meal in one of the restaurants on the grounds. Stay at: The Grand Hotel Eastbourne or Gravetye Manor. Don’t miss: A study event on woman in opera, on August 8, 2020.

This year’s highlights include the opening performance of Gougalōn – Scenes from a Street Theatre by Unsuk Chin. Followed by Pintscher’s own Bereshit. Stay at: The Ojai Valley Inn Don’t Miss: The US premiere of Genesis Cycle, from the Ensemble Intercontemporain.

the most evocative and influential paintings about love

Tanglewood, June 19 – September 1, 2020. The summer home of the Boston Symphony Orchestra since 1937, Tanglewood is quite similar in spirit to Glyndebourne – a serene country estate with ample room for strolling and picnics.

This year’s program will feature performances from an enormous range of artists, including Ringo Starr and Patti Labelle. Classical highlights will include the overture to Beethoven’s The Creatures of Prometheus, in honor of the composer’s 250th birthday. As well as Berlioz’s Requiem. Stay at: Blantyre in Lenox, Massachusetts. Don’t miss: A special performance on June 21, 2020 from Judy Collins, Arlo Guthrie, and special guest Jesse Colin Young. And the John Williams Film Night, hosted by the composer himself. It’s a favorite of attendees, and features some of the most beloved music of Hollywood.

The Bravo! Vail Music Festival, June 25-August 2, 2020. Several of the world’s greatest orchestras make their summer home at Bravo! Vail. The Dallas Symphony Orchestra, the Philadelphia Orchestra, the Chamber Orchestra of Europe and the New York Philharmonic will each perform this summer for a stretch of one or two weeks.

Stay at: The Ritz Carlton Vail Don’t Miss: The opening from the Chamber Orchestra of Europe, who will start off the first night of the festival with Mendelssohn and Chopin.

the most romantic and chic restaurants in Paris

Embedded within Summerscape is the 31st annual Bard Music Festival – its theme this year is Nadia Boulanger and Her World. Over two weekends, a series of discussions and concerts will celebrate the life of the 20th century composer, beginning with a performance of Vers la vie Nouvelle on August 7, 2020. Stay at: The Ritz Carlton Westchester. Don’t Miss: A performance of Frank Loesser’s The Most Happy Fella, directed by Daniel Fish.

Aix-en-Provence, June 30- July 18, 2020. The Festival International d’Art Lyrique d’Aix-en-Provence has been held each summer since 1948. Devoted mainly to opera, it also includes concerts of orchestral, chamber, vocal and solo instrumental music. Performances are given in a variety of locations, including the Théâtre de l’Archevêché (in the courtyard of the former Archbishop’s palace); the Jeu de Paumes (a restored 18th century theatre); and the Théâtre du Grand Saint-Jean, on the grounds of a chateau.

This season, each performance in the program is based on a true or historical event, and each circles existential questions of guilt and innocence. There will be performances of Mozart’s Così Fan Tutte, Monteverdi’s L’Orfeo and L’Incoronazione Poppea, and The Golden Cockerel by Nikolai Rimsky-Koraskov. Stay at: The Hotel Le Pigonnet. Don’t miss: The premiere of a new opera from Kaija Saariaho, called Innocence.

the best restaurants in the world in performing arts venues

Ravinia, July 1-August 30, 2020. The Chicago Symphony Orchestra plays an annual 18-concert summer season at the Ravinia Festival. This summer-long event takes place in the 36-acre park of one of Chicago’s most upscale suburbs—Highland Park– and is North America’s oldest music festival. Founded in 1904, it got its name because of the ravines located at the nearby shores of Lake Michigan.

This year’s program runs the gamut from a performance of Mendelssohn by Itzhak Perlman, to a screening of the 2019 Lion King with live orchestra accompaniment. And of course, there’s going to be a lot of Beethoven. Stay at: The Four Seasons Chicago or The Ritz-Carlton Chicago. Don’t miss: Cynthia Erivo’s performance, accompanied by the Chicago Symphony Orchestra and conducted by Marin Alsop.

The Aspen Music Festival, July 2 -August 23, 2020. Now in its 71st year, this festival in Colorado Rockies is a wonderful mix of performances from well-known global artists and students at the Aspen Music School.

The 2020 season theme is “Beethoven’s Revolution,” in celebration of the composer’s 250th birthday. The program includes performances of symphonies 2, 4, 5, 6 and 7. Stay at: The Little Nell or the St. Regis. Don’t miss: An opera theater master class with co-artistic directors of the Aspen Opera Theater and VocalsARTS, Renée Fleming and Patrick Summers.

what are the best museum gift shops in the world?

The Hollywood Bowl, June 13 – September 10, 2020. The summer home of the Los Angeles Philharmonic has been, for more than 90 years, this open-air amphitheater with 17,500 seats and distant views of the iconic Hollywood sign. As with many of its peer orchestras, the LA Phil keeps the seats filled by performing the scores from several movies during its residency outdoors (it is Hollywood, after all).

This year’s repertoire will feature a wide array of music, from Dvořák & Brahms, to Tchaikovsky, to the scores of Amadeus and Bernstein’s Wonderful Town.  Stay at: The Beverly Wilshire (A Four Seasons Hotel). Don’t miss: A performance from Janelle Monae, with a complete orchestra accompaniment.

The Santa Fe Opera Festival, July 3rd – August 29, 2020. Founded in 1957 by the Santa Fe Opera Company, this festival provides attendees a fully immersive experience in a stunning location. There are shuttles to the festival each day from Santa Fe and Albuquerque, and preview dinners before each show.

The company’s 64th season will feature the beloved The Barber of Seville, The Magic Flute, and Madame Butterfly. Stay at: The Four Seasons Resort Rancho Encantado or the Rosewood Inn of the Anasazi. Don’t miss: The tailgate picnic, a beloved tradition of festival-goers.

the most beautiful artist-designed chapels in the world

This year’s program will open with a performance of The Sound of Music, and will include performances of Don Giovanni and Die Feen. Stay at: The Otesaga Hotel in Cooperstown. Don’t miss: Così? a contemporary take on the beloved Mozart opera.

This year’s music and opera highlights include a production of Mozart’s Requiem; the US premiere of Verdi’s Falstaff; a lot Beethoven; and Blue, a new opera by Jeanine Tesori and Tazewell Thompson.  Stay at: The Mandarin Oriental. Don’t miss: Flowers for Kazuo Ohno, a performance set to Leonard Cohen’s music that reflects upon a transcendent meeting between Kazuo Ohno and the Colombian dance troupe Compañía Cuerpo.

the best destination art museums in the world

The BBC Proms, July 17 – September 12, 2020. Founded in 1895, this eight-week summer festival of almost 100 classical music concerts is held in the Royal Albert Hall in central London and in Chelsea’s Cadogan Hall. The list of this summer’s performances and their specific dates will be announced on April 22nd, 2020, and tickets will go on sale on May 16th.

Stay at: The Beaumont Hotel in Mayfair. Don’t miss: The Last Night of the Proms, which always draws a devoted crowd and is also broadcast live on radio and television.

The Salzburg Music Festival, July 18-August 30, 2020. In their hundredth year, the birthplace of Mozart will be the site of several opera productions from the Vienna Philharmonic this summer, including Richard Strauss’s Elektra, Puccini’s Tosca, and Mozart’s Don Giovanni.

the best summer jazz festivals in the world

Bayreuth Festival, July 25 – August 30, 2020. Performances of operas by the 19th-century German composer Richard Wagner are presented here annually. Conceived of by the composer himself, this festival serves as the perfect showcase for his music.

The most important summer classical and opera festivals: The Bayreuth Festival. Courtesy Photo.

In a theater built specifically for these works, attendees can enjoy performances of Siegfried, Lohengrin, Das Rheingold and more. Stay at: The Hotel Rheingold. Don’t miss: A special performance of IX. Symphonie on the last night of the festival.

Lucerne Summer Music Festival, August 11 – September 13, 2020. One of our favorite places in all of Switzerland is home to an international music festival first held in 1938, when Toscanini directed a gala concert in front of Wagner’s home. Tickets go on sale this year on March 23, 2020.

The program this summer will include more than 100 concerts, with performances by the Lucerne Festival Orchestra, the Berlin and Vienna Philharmonics and the Pittsburgh Symphony Orchestra. The theme this year is “joy.” A highlight will be the many performances on August 30, 2020, or “Beethoven Day” in honor of the composer’s 250th birthday. Stay at: The Burgenstock Resort. Don’t miss: A series of performances scattered through the festival by musical groups from all around the world.

The Most Important Classical Music Festivals of Summer 2020

That’s it! Our top picks for the best, most magical summer classical music and opera festivals and performances for 2020. What’s at the top of your list?