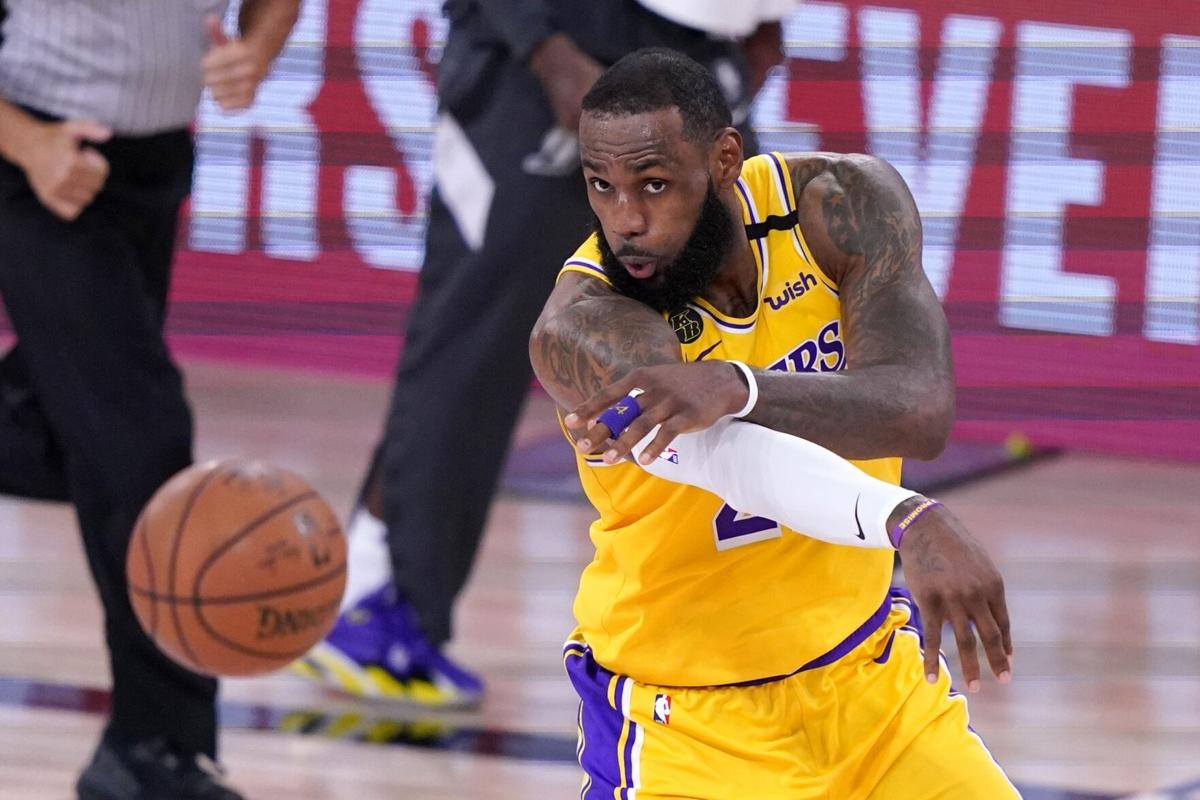 This Week in Sports Talk (TWIST) is our weekly roundup of top headlines from the past seven days in the world of sports, plus a preview of what’s up next. Heading into the week of September 20, 2020, here’s the top sports news, with a twist. Skim it, and you’ll be good to go all week.

This week in sports talk, September 20, 2020: The Denver Nuggets rallied to beat the LA Clippers in the Western Conference semifinals. Courtesy Photo.

In Game 1 on Friday night, the Lakers cruised to a win, 126-114. Reports are that the Lakers’ LeBron James was on fire in part because he’s angry that he received only 16 votes in the regular season MVP vote – and now has something to prove. Game 2 is tonight.

Meanwhile, in the Eastern Conference Finals, the Miami Heat have a 2-1 lead over the Boston Celtics. The Celts lost Games 1 and 2 in heart-breaking fashion, but came back last night to take Game 3, 117-106. Still, emotions are understandably running high. After their game 2 loss, the Celts had a very heated “discussion” in their locker room that was overheard by several reporters. Marcus Smart and Jaylen Brown had to be physically separated as the “discussion” heated up.

Despite his team missing the Finals, Giannis Antetokounmpo of the Milwaukee Bucks was named MVP of the NBA for the second straight year. In what may be an ominous development for Bucks fans, Antetokounmpo “unfollowed” the team and teammates on Instagram a week ago. Is he headed West? Stay tuned.

Forget everything we said last week about the disappointing performance of the New York Yankees. They’re been on fire for the past week or so, and are currently on a 10-game winning streak; they now hold second place in the AL East, 3.5 games out of first place!

The Yanks are hitting home run records during this comeback streak, too. Against the Toronto Blue Jays this week, they had three consecutive 6-home run nights, a MLB record. In scores that sound like football, not baseball, the Pinstripes had 19 home runs in 3 games, also a MLB record.

Just another reminder, kids: it ain’t over ’till it’s over.

Finally, the Cleveland Indians’ Zach Plesac pitched an “immaculate inning” against the Detroit Tigers this week: 9 pitches, 9 strikes, 3 strikeouts. It was only the third time since 2014 that Cleveland had an inning like that.

Week 1 of the NFL season is in the books, and there were a few notable headlines. Tom Brady disappointed in his debut with the Tampa Bay Buccaneers, losing at New Orleans to the Saints and Drew Brees, 34-23. Some blame the lack of a preseason for his slow start.

Tom Brady has a rough start with the Tampa Bay Buccaneers. Photo Credit: The Guardian.

Meanwhile, his replacement in New England, Cam Newton, led the Pats to a 21-11 victory over the Miami Dolphins.

Our Sports Desk summarizes it this way. Those who are up in perception after Week 1: the Kansas City Chiefs; Seattle Seahawks; Pittsburg Steelers; Cam Newton; and Aaron Rogers. Those who are down: Tom Brady; the New York Jets; the Philadelphia Eagles.

It’s just one week, though – so don’t be surprised if it’s all changed by Monday.

Monday Night Football has officially entered its 50th-anniversary season. Sports in primetime? Who would have thought that would work?

Top draft pick Joe Burrow and the Cincinnati Bengals had a good showing in a Week 2 in a Thursday night primetime game against the Cleveland Browns. Despite a strong performance by the rookie quarterback, though, the Bengals lost, 35-30, in the Battle of Ohio (doesn’t quite have the ring of “the Battle of LA,” but we’re going with it).

The Big 10 reversed its earlier decision to postpone its fall sports season and will now commence playing football on October 24. This appears to have been a result of players insisting that they wanted to take the field, pressure from alumni and others in the face of the SEC and ACC going ahead with their seasons. And of course, it’s also due to the significant financial hit that universities were taking without the lucrative business of fall football.

That leaves the Pac-12 standing alone as the only Power 5 conference not playing this fall. Will they also reverse course? Watch this space for further updates. Meanwhile, CBS Sports reports that nearly 20% of scheduled college football games have been postponed so far this fall due to positive tests for coronavirus among players or team staff.

In related news, the NCAA Division I college basketball season will start on November 25 (aka the day before Thanksgiving).

Notable college football games this weekend: Boston College rolled over Duke in a “statement win,” 26-6. Pittsburgh beat Syracuse, 21-10. The eagerly-awaited game between Houston and Baylor was postponed due to one or more positive coronavirus test results on the Houston team.

The New York Islanders’ Cinderella story has come to a close. They were eliminated from the Stanley Cup playoffs this week with a 2-1 loss in Game 6 in overtime to the Tampa Bay Lightning. The Vegas Golden Knights fell to the Dallas Stars earlier in the week.

This week in sports talk, September 20, 2020: The Dallas Stars have a one-game lead in the Stanley Cup Finals against the Tampa Bay Lightning. Photo Credit: AP.

So Tampa Bay meets Dallas in the Finals. Both franchises have just one Stanley Cup victory – here’s their chance to double that number! In Game 1 last night, Dallas won 4-1 over the Lightning, perhaps because they were well-rested and the Lighting had to roll into the finals with only one night off.

Dominic Thiem had a rough start in the final round of the US Open last Sunday. But he ultimately defeated Alexander Zverev in a five-set match to win his first Grand Slam.

Fresh off her win at the US Open, Naomi Osaka has announced that she won’t be playing in the French Open later this month due to a hamstring injury.

The International Tennis Federation announced this week that it is renaming the annual team competition – formerly known as the Fed Ex Cup – the “Billie Jean King Cup.” The event began in 1963 after decades of lobbying, and was intended to be the equivalent for women of the Davis Cup, the men’s team event that began in 1900.

The US Open is underway this weekend at the Winged Foot country club in Westchester County, New York. And it’s been brutal for a number of big names. Tiger Woods, Phil Mickelson and Jordan Spieth all failed to make the cut on Friday.

This week in sports talk, September 20, 2020: Winged Foot Country Club, site of the US Open.

Heading into today’s final round, Matthew Wolff (-5), Bryson DeChambeau (-3) and Louis Oosthuizen (-1) are atop the leaderboard. Wolff is 21 years old; if he wins, it will be the first time a player has won the tournament in his debut appearance since 1913.

9. The Mets ownership drama may not be over yet

Just when we all thought that the saga of who will own the New York Mets was over, a new spanner has been thrown into the works. Steve Cohen’s bid for a 95% ownership stake, valuing the  Mets at $2.475 billion, was accepted by the Wilpon family. But he still has to win the approval of a majority of the current owners – and that may be more difficult given the number of lawsuits filed against his hedge fund – Point 72 – by former female employees.

We feel sure that J-Lo and A-Rod remain in the wings. Perhaps there will be more surprises and twists in this story before it’s done . . .

In a stunning and dramatic turn of events, the penultimate stage of the Tour De France saw a new leader take the yellow jersey.

In a ferociously-fought time trial yesterday, Tadej Pogacar erased a 57-second deficit and will wear the leader’s jersey into Paris. Primoz Roglic, a fellow Slovenian, had led the race for the past two weeks. This is the first time that Pogacar, 21, has competed in the Tour de France, and he will lead the pack in the ceremonial ride into Paris.

That’s it. You’re good to go with the top headlines and coming attractions heading into the week of September 20, 2020. We redeemed ourselves a wee bit in our friendly football pool on Sunday after an ignominious start to the season. Wish us luck today! Stay safe and strong, dear reader. See you next week.