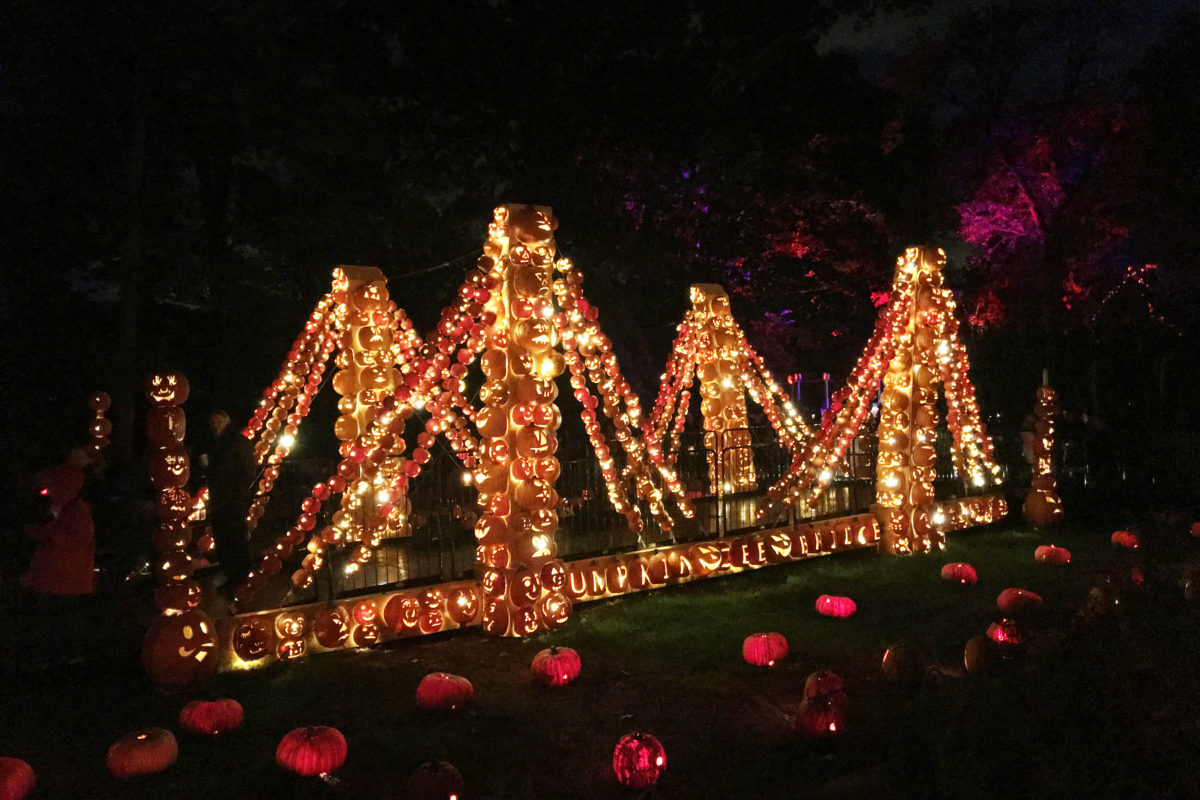 .If you really love Halloween, we have a suggestion. Head to the Historic Hudson Valley in Westchester County, just outside New York City for the annual Great Jack O’Lantern Blaze. Filled with a display of thousands of beautiful, inventive and scary-spooky carved illuminated pumpkins in a bucolic outdoor rural setting, the Great Blaze is pure Halloween joy for kids and families of all ages.

Where can you find pure Halloween joy?

What’s the best possible way to celebrate Halloween before the big night actually arrives? Here at Dandelion Chandelier, we love All Hallows Eve, so we’ve been on a mission to investigate the most luxurious Halloween experiences.

One critical choice is town or country – is your perfect Halloween rustic-chic, surrounded by trees, pumpkins and hay bales? Or is it big-city glamorous, with stately townhouses decorated in the most sinister possible way?

Actually, why choose? We’ve got a great suggestion for a fabulous Halloween in the country. And we’ll also show you how to experience Halloween like an urban hedge fund boss. Because that’s the best thing about this holiday – if you celebrate it properly, you can actually have it all.

What is the Historic Hudson Valley Great Jack O’Lantern Blaze?

First up, a splendid way to experience Halloween silliness, spookiness, laughter and artistry in a rural setting not far from the city. If you live in or are visiting greater New York in October, you have to go to The Great Jack O’ Lantern Blaze.

Picture this. It’s the perfect mid-October night: breezy, dry, slate-grey clouds skittering across a sapphire night sky. The avuncular local weather forecasters have issued a frost advisory, and there’s talk of “frost on the pumpkin” later that evening.

Overhead, there’s a crescent moon, the first stars of the night are starting to sparkle, there’s just the right level of snappy cold in the air. Winter is coming. But not just yet. It’s harvest time in the countryside, with its promise of bounty and plenty. The season of mist and mellow fruitfulness, as the poet John Keats wrote. You can smell wood smoke, soil and the aroma of fresh donuts. There are towering trees all around you. The cries of ghosts, zombies, and small children fill the air.

It’s the Great Jack O’ Lantern Blaze in the historic Hudson Valley of New York. And if you love Halloween, it’s totally awesome.

where is the Hudson Valley Great Jack O’Lantern Blaze?

The event takes place in Westchester County, about 50 miles north of New York City, at the historic 18th-century Van Cortland Manor. It’s not far from the Hudson River in Croton-on-Hudson.

On the grounds of the estate are meandering paths lit by authentic lanterns with real flames – and scores of elaborate, whimsical installations, all made of lighted jack o’ lanterns.

It’s a magical experience to roam through the lighted landscape – the jack o’ lanterns glow in the darkness, and there are sound effects to add to the atmosphere, as well as light shows projected into the tree-tops.

You can move at your own pace, lingering over the vignettes that most appeal to you, and skipping over any that don’t. It’s an excellent multi-generational family evening out, or a great adventure for a group of friends. The variety of displays is so wide that it’s highly likely that something in the mix will speak to everyone in the group at some point.

when did the Halloween Great Jack O’Lantern Blaze start?

The Great Blaze has been going on for many years, and it has become far more sophisticated, artistic, and elaborate over time. The show-stopping installations include a “Pumpkin Zee Bridge” that visitors can cross on foot. A pumpkin “Jurassic Park” complete with a T-Rex, brontosaurus, triceratops, and flying pterodactyl. A Statue of Liberty made of pumpkins. And a whirling Pumpkin Carousel and a circus train.

what are the stand-out pumpkin sculptures at the Great Jack O’Lantern Blaze?

Subtle wit and humor mix with a discreet history lesson as you wander through the Great Blaze. For example, a giant sea serpent surrounded by gourds carved with images of fish is placed next to the banks of the Croton River. A modest building that was once a US Post Office now sports three over-sized grinning jack o’ lantern stamps.

A sea monster made of pumpkins at the Great Blaze Halloween spectacular.

There are sweetly whimsical vignettes, like a towering tree filled with sparkling pumpkin lights. A garden of pumpkin sunflowers; a giant mushroom patch; a beehive. A forest filled with images of nocturnal animals carved into the pumpkins, some hanging in trees. (A very lifelike possum hangs upside down in apparent Halloween joy, possibly the result of too much candy corn).

There are displays based on fun and games that will make you laugh out loud, including a jack o’ lantern Tic-Tack-Toe display. And a pumpkin jack-in-the-box that startled and then delighted the little ones as we passed it.

Some displays are quietly gorgeous, like the stained-glass church windows. And the pottery vases made of pumpkins. Some are bold and assertive, like the stunning giant spider web.

Of course the Headless Horseman makes an appearance (this is his home turf). There are also classic Halloween vignettes: skeletons who appear to be dancing the routine from Michael Jackson’s “Thriller;” a graveyard with toppled tombstones; bats, black cats, and witches.

an incredible display of pumpkin-carving artistry

At some point, you’ll find yourself forgetting that all of these installations are made of pumpkins. But take a moment and appreciate the work and skill that goes into this carved pumpkin display.

The artistry and delicacy of the carvings, their wit and humor, and the attention to detail are transporting. Give an artisan a tool and some material, and she’ll find a way to create something beautiful, whether out of marble, butter, sand, ice – or a pumpkin. Kudos to the creators of these beguiling scenes.

who goes to the Great Jack O’Lantern Blaze?

What’s the crowd like, you ask? The vibe is friendly, chatty and appreciative – you’ll be impressed at how civilized and patient everyone is, and how willing people are to stop and take a group photo for a fellow visitor or two.

We went on a Monday evening, and even on a school night, the event was completely sold out. In the early part of the evening, you’ll see lots of parents with children, either in strollers or in their arms. The little kids frequently carry glowing light sticks or sport glow-in-the-dark necklaces. We smiled as we heard some of them excitedly discussing how the displays were giving them ideas for their own jack-o’-lanterns at home. Super. cute!

A dinosaur made of carved pumpkins on display at the Great Jack O’Lantern Blaze Halloween spectacular.

If you’re a parent of little ones below the age of five, definitely visit on the early side. The displays are gorgeous, but for a small one they can be understandably quite spooky as the sun sets and it gets pitch dark. Several fathers were pressed into service by their offspring as protectors when the slithering snakes made their presence known.

Also in the early evening, we spotted groups of older female friends dressed for the occasion with cat’s ears, and witches hats. It was clear that this was an annual, eagerly-anticipated journey for them.

We saw many more teenagers and young adults as the night progressed, and this is probably the common pattern, especially on the weekends.

Tickets are sold based on timed entry, but there’s plenty to do if you arrive early, or decide to linger afterward.

There are free-standing kiosks selling food, including aptly-named sandwiches like the Headless Horseman (mozzarella, tomato and greens) and the Washington Irving (turkey and brie).

Skeletons made of carved pumpkins on display at the Great Jack O’Lantern Blaze Halloween spectacular.

A couple of tips if you decide to go: allow plenty of time to get there, because there’s a great deal of traffic as you get closer to the event. You can park for free at the temporary grass lot in front of the main entrance.

Dress for a cool autumn night: you’ll probably want a warm coat and gloves (taking all those photos is going to make your fingers chilly). Wear flats, as most of the pathways are dirt and sawdust, and there are some gentle hills. There’s no running water, just portable toilets, so plan accordingly.

There are VIP tickets available. If you become a member of Historic Hudson Valley before you arrive, you can join the express line and shorten your wait. Get your tickets as soon as possible, as the event sells out every year. And if you want to see more images, head to Instagram for a quick search of #pumpkinblaze.

A train display made of carved pumpkins at the Great Jack O’Lantern Blaze Halloween spectacular.

This is a splendid way to celebrate the spirit of Halloween in the country: sweets, cider, silly fun, fresh air and pie. And if you get caught up in the moment and decide to join the line of dancing skeletons for a bit? We will totally understand, dear reader.