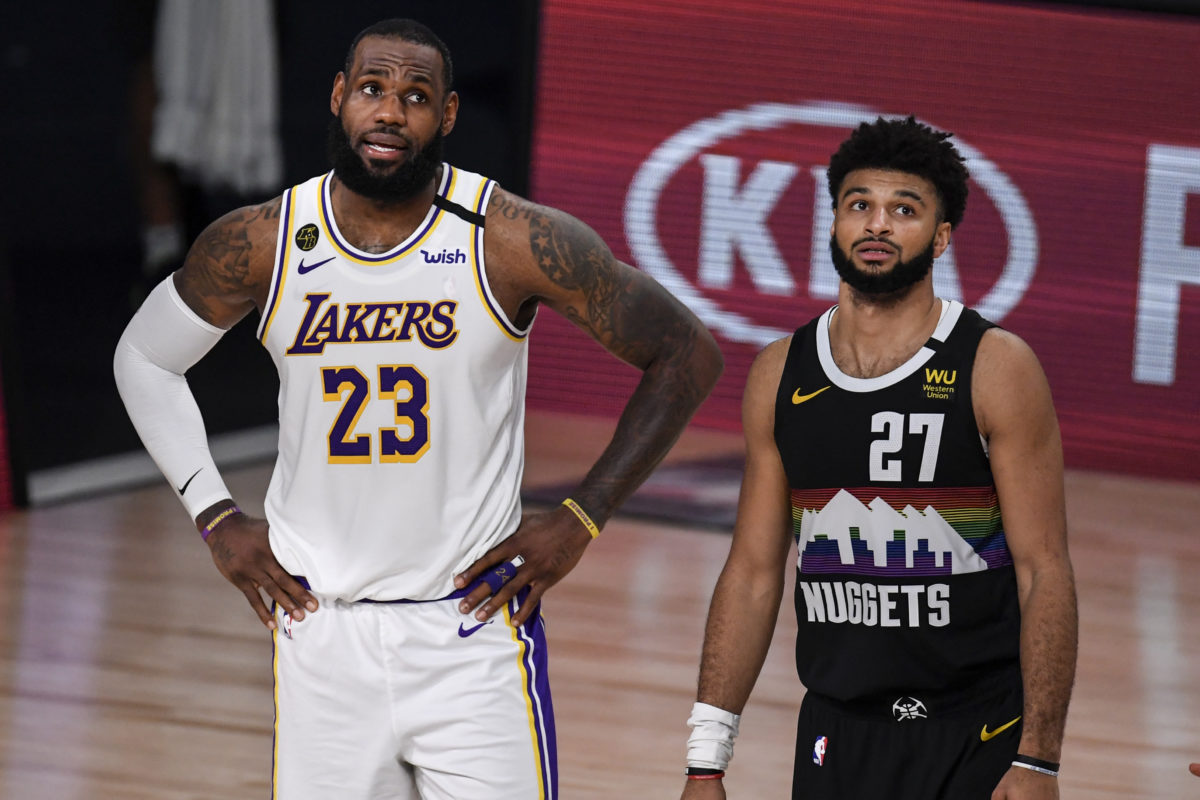 This Week in Sports Talk (TWIST) is our weekly roundup of top headlines from the past seven days in the world of sports, plus a preview of what’s up next. Heading into the week of September 27, 2020, here’s the top sports news, with a twist. Skim it, and you’ll be good to go all week.

There is so much going on at once right now that avid sports fans are drinking from a firehose. Major League Baseball is heading into the playoffs. The NBA is heading into the Finals. The NHL is down to the last game or two of the Stanley Cup Finals. The NFL and college football are underway and the French Open is starting. Plus there’s the UFC! That’s a lot of sports all of a sudden – from a drought to a drenching. Keep your eyes peeled for the inevitable mud slide.

1. Lakers clinch their spot in the NBA Finals

The Miami Heat took Game 4 of the Eastern Conference Finals, 112-109, pushing the Boston Celtics to bring of elimination. But in Game 5, the Celts fought back, outlasting Miami 121-108 and narrowing the Heat’s series lead to 3-2.. Not many expected the Heat to make the NBA Finals this year. And now they’re one win away. Game 6 is tonight.

The hero of Game 4 – and arguably of this series – was the Heat’s aptly-named Tyler Herro. The rookie had 37 points — the most ever by a rookie in the conference finals.

Meanwhile, the LA Lakers won Game 5 in the West, defeating the Denver Nuggets for the conference championship. The Nuggets have two young superstars, Jamal Murray and Nikola Jokic, who became fan favorites during the postseason. Expect to hear those names again in the seasons to come.

Overall, there was markedly less focus and enthusiasm for this round of the NBA Playoffs – probably because there is so much competing sports programming. Our Sports Desk assures us that the fans’ currently muted energy levels will ramp up again once the Finals commence.

In other NBA news, Billy Donovan has been named the new head coach of the Chicago Bulls, just weeks after Donovan and the Oklahoma City Thunder mutually parted ways.

The final week of the regular MLB season is done, and the playoffs start Tuesday with the Wild Card Series. Eight teams from each league will compete, meaning that more than half of the MLB will be in the playoffs. Normally, there would be only 10 teams total.

In the NL, though, there was plenty of drama unfolding all week. The LA Dodgers, Atlanta Braves and Chicago Cubs have clinched their respective divisions. Early in the week, the San Diego Padres secured a wild card spot. So did the Cincinnati Reds.

The Cinderella story of the week is that the Miami Marlins clinched a playoff slot in the NL as they beat the New York Yankees at home. It’s the first time they’ll be in the postseason since 2003. The franchise, led by former Yankee Hall of Fame shortstop Derek Jeter and manager Don Mattingly, has been living a remarkable story.

The Marlins were the league’s worst team in 2018 and lost 105 games last season. They had 20 positive cases of coronavirus in the early weeks of the 2020 season and needed to add almost 20 new players to the roster when they resumed play.

what you need to know about the 2020 MLB playoffs

3. NFL Week 2 sees a correction of sorts – and lots of injuries

The New York Jets were hit particularly hard, and head into Week 3 without their 3 starting wide receivers, their starting running back, their center and right tackle. So, out of 11 starters on offense, 6 are hurt. There’s discussion over whether some of these injuries could have been avoided, or at least limited, if there was a preseason this year.

who’s up in the NFL?

The Tampa Buccaneers and Tom Brady chalked up their first win. Las Vegas (formerly Oakland) Raiders played their first game in their new stadium, and took down Drew Brees and the Saints with a 34-24 victory to move to 2-0.

Josh Allen is generating MVP chatter, and the Buffalo Bills are being discussed as Super Bowl contenders. The adorable Kyler Murray is off to a good start with the Cardinals in his sophomore season – they’re 2-0 and have a good shot at making it to 5-0, given their schedule.

who’s down in the NFL?

Cam Newton and the New England Patriots lost, as did Drew Brees and the New Orleans Saints. The Atlanta Falcons suffered a heartbreaking loss after building up a huge lead against the Dallas Cowboys. It was highly reminiscent of their Super Bowl loss to the Pats, actually. The Falcons were up 20 – 0 at the end of the first quarter and 29 – 10 at the end of the half. Ultimately they lost 40 – 39. Ugh!

The New York Jets look particularly bad so far this season, and the “Sack Gase” movement starting. As our Sports Desk observes: “What could be more predictable – the smell of pumpkin spice, leaves turning and Jets fans signing a petition to get rid of their head coach.” At least this one thing in 2020 is exactly as expected!

Speaking of coaches, New England Patriots coach Bill Belichick made news when he appeared for his Wednesday morning press conference looking particularly disheveled. Ragged sleeves, hair unkempt. Many on Twitter noted that he basically looked like a homeless individual. Dude, seriously, what is up with the holey tee? There is surely a story here, and we hope to share it with you as soon as it becomes public.

Former Chicago Bears’ great Gale Sayers died at the age of 77 on Wednesday. A first-ballot Hall of Famer, Sayers was revered as one of the most upstanding and talented players the NFL has ever seen. His six total touchdowns in a single game in 1965 is still the NFL record. He also holds the record – 22 – for the most touchdowns ever scored by a rookie in a single season. Inducted at 34, Sayers remains the youngest player to ever be inducted into the Pro Football Hall of Fame.

He is best known among occasional sports fans for the film Brian’s Song, about Sayers’ friendship with Bears teammate Brian Piccolo, who was diagnosed with terminal cancer after going pro in 1965. Billy Dee Williams played Sayers in the film.

Thursday Night Football saw The Battle of Florida – also known as “The Beard versus the ‘Stash.” The Miami Dolphins and their mustachioed quarterback Gardner Minshew met the Jacksonville Jaguars and their hirsute quarterback Ryan Fitzpatrick (whose beard is truly ferocious). The Dolphins were underdogs but they thumped the Jags 31-13, earning their first win of the year.

The big games in Week 3 include the Los Angeles Rams at the Buffalo Bills; the Seattle Seahawks hosting the Dallas Cowboys;  and the Green Bay Packers at the New Orleans Saints. We’re psyched to see the Kansas City Chiefs at the Baltimore Ravens. Our Sports Desk advises keeping close watch of Tampa Bay at the Broncos.

Fun fact: J.J., T.J. and Derek Watt will all play in Sunday’s Texans-Steelers game, making them the second brother trio to play in the same NFL game since 1930.

This weekend was the first in which the SEC had a scheduled game – so for many, even though it’s technically Week 4, it was really the first weekend of college football.

After the Big Ten decided to reinstate its fall football season last week, this week the PAC 12 and the Mountain West followed suit. So for better or worse, by the end of October, there will be a “real” college football season underway.

The Stanley Cup Finals are going to a Game 6 after the Dallas Stars managed to hold on with a win in Game 5 last night against the Tampa Bay Lightning. The final score was 3-2 in double OT.

The French Open at Roland Garros in Paris commenced today. On the men’s side, all eyes will be on Rafael Nadal, who is playing for his 13th French Open title. And of course, people will be watching to see if Novak Djokovic can redeem himself after his ignominious exit from this year’s US Open after hitting a ball in frustration that inadvertently injured a line judge.

Andy Murray and Stan Wawrinka are the marquee matchup today. Due to his absence from prior tournaments due to injury, Murray is unseeded. Also today, 16-year old Coco Gauff meets Johanna Konta.

Serena Williams will compete in her 19th French Open – the draw has her in a bracket with Victoria Azarenka, who defeated her in the semifinals of the US Open. Earlier today, Azarenka and her opponent walked off the court during a rain delay, despite the officials’ ruling that both had to wait it out in the cold.

Sadly for us, Venus Williams is already out of contention. Anna Karolina Schmiedlova reprised her 2014 Roland Garros win over Williams in the first round. Ugh! Simona Halep is the favorite in this clay event.

9. The Return to Fight Island

Last night, the UFC returned to “Fight Island” in Abu Dhabi for UFC 253. There were two title fights. Middleweight division champ Israel Adesanya took on top challenger Paulo Costa after months of trash talk between the two and dominated him for a TKO win.

Meanwhile, Dominick Reyes and Jan Blachowicz battled it out for the vacant light heavyweight belt. Blachowicz won in two rounds, surprising many who expected more from Reyes.

In other UFC news, Conor McGregor says he’s looking not to return to the UFC. But he does want to fight fully retired boxing legend (and Phillipine Senator) Manny Pacquiao in December on pay-per-view. The two sides are reportedly in talks.

Michael Jordan and Denny Hamlin are creating a new NASCAR team and Bubba Wallace is driving for them!

That’s it. You’re good to go with the top headlines and coming attractions heading into the week of September 27, 2020. We did pretty well in our friendly football pool in Week 2. Wish us luck today! Stay safe and strong, dear reader. See you next week.