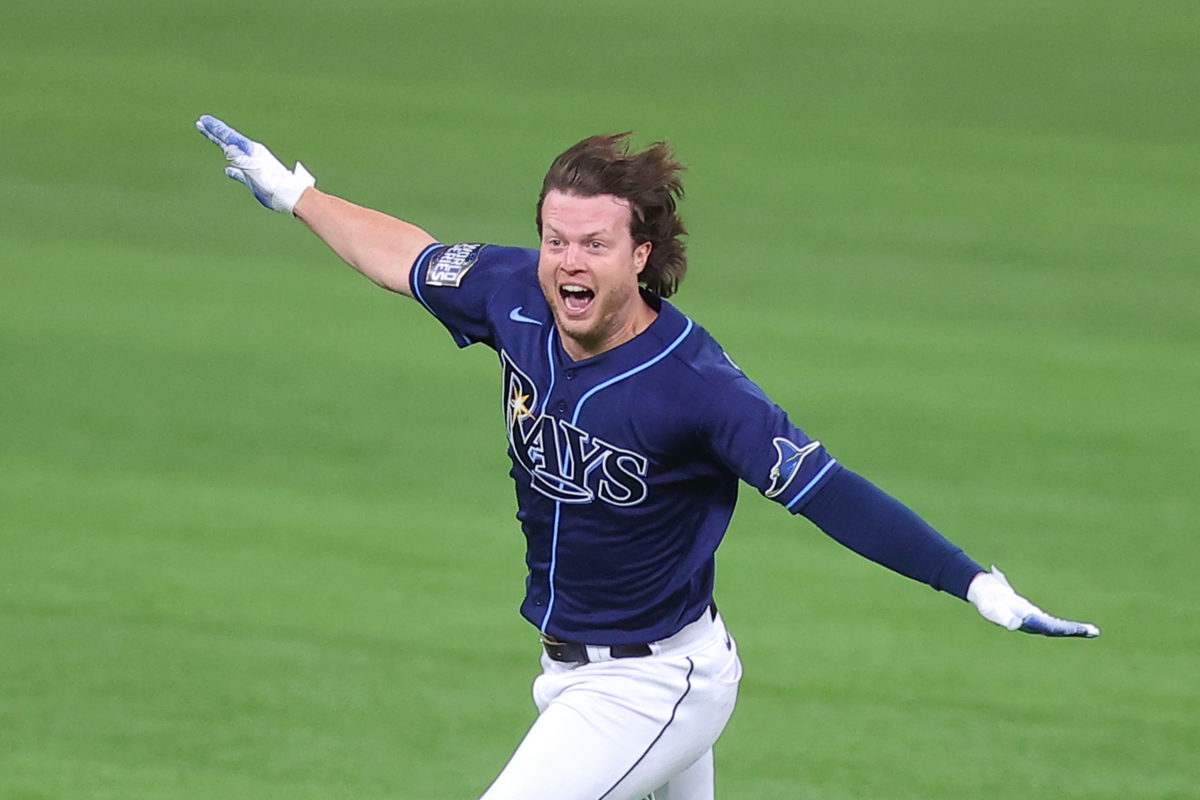 This Week in Sports Talk (TWIST) is our weekly roundup of top headlines from the past seven days in the world of sports, plus a preview of what’s up next. Heading into the week of October 25, 2020, here’s the top sports news, with a twist. Skim it, and you’ll be good to go all week.

Even though the NBA and NHL are done for now, there’s still Zoom water cooler talk to participate in this coming week. Like the World Series, NFL games, and college football games, including the first week of the season for the Big Ten and Mountain West conferences. According to our Sports Desk, here are the top 10 stories in the world of professional sports to know heading into the week of October 25, 2020.

1. Dodgers and Rays all tied up in MLB’s World Series

Mookie Betts and Clayton Kershaw dominated in the first game of the Fall Classic, putting the LA Dodgers up one. However, a day later, Tampa Bay bounced back with a 6-4 win in Game 2. The Dodgers took Game 3. But last night Tampa Bay won a dramatic walk-off win in Game 4, 8-7. The Rays were down, with 2 outs in the 9th inning, so it was truly a stunning win.

Both teams had dramatic 7-game series on their road to the World Series  – now they’re in a best-of-three sprint to the finish, and its looking like a thriller. Game 5 is tonight.

Among the other pressing matters, this series will help determine whether LA (whose Lakers won the NBA Championship) or Tampa Bay (whose Lightning won the Stanley Cup) will win the title of Best Sports City in the US this year.

As of this posting, the NFL standings have taken on a barbell shape, with unusually bifurcated performances across the league. Meaning that the good teams are great and the bad ones are . . . really stinking up the place.

Three teams are still undefeated as of this posting: the Pittsburg Steelers, Tennessee Titans and Seattle Seahawks. Right behind them, the Baltimore Ravens, Kansas City Chiefs and Chicago Bears are 5 – 1. The Bears are a surprise entry on this list and there are still some doubters out there about whether they actually belong in this top-tier group. After a big loss in week 6 to the Tampa Bay Buccaneers, the Green Bay Packers are 4 – 1.

On the other end of the spectrum, the New York Jets are without a win this season. And the Giants, Bengals, Jaguars, Chargers, Vikings and Falcons all have only 1 victory season to date.

As previously mentioned, the undefeated Aaron Rodgers and his Green Bay Packers lost to Tom Brady and the Tampa Bay Buccaneers in week 6. For those keeping score in the “Belichick versus Brady” competition, this was a big week for the former New England quarterback. The Patriots (who, by the way, are and always will be our team) lost to the Denver Broncos, with Cam Newton (back after testing positive for coronavirus) performing poorly. Advantage Brady.

There were two Monday Night Football games to close out Week 6. The Kansas City Chiefs beat the Buffalo Bills, 26-17. And without Dak Prescott, the Dallas Cowboys lost big to Kyler Murray and the Arizona Cardinals, 38-10.

Tua Tagovailoa is the new starting quarterback for the Miami Dolphins. After this week’s announcement, the previous starter, Ryan Fitzpatrick, was candid about his shock over being benched. Miami is one game out of first place in the AFC East and in the middle of a two-game winning streak. So while everyone knew that the long-term plan was that Tua would become the franchise quarterback, the decision seems a beat early. Ready or not, though, it’s Tua Time.

Tua Tagovailoa is the new starting quarterback for the Miami Dolphins. Courtesy Photo.

Meanwhile, he’s baaack . . . Antonio Brown’s suspension will be lifted after Week 8 and he’s reuniting with Tom Brady in Week 9 after signing a new one-year contract with Tampa Bay. Brown was suspended for a burglary and battery case (there’s also an ongoing civil suit in Florida related to sexual assault). Nevertheless, reports are that Brady really connected with the player during the one game they played in New England. Will the magic return? Stay tuned.

On Thursday Night Football in week 7, the New York Giants blew a 21-10 lead and ultimately lost to the Philadelphia Eagles.

The Eagles rallied, scoring 12 points over the final six minutes of play, to deliver a 22-21 win. Giants quarterback Daniel Jones took off on an 80-yard run, then tripped over himself in an open field just short of the finish line. While the team ultimately got the ball over the line, the play has birthed a thousand memes. It may end up serving as the definitive metaphor for the Giants’ 2020-21 season.

The big games to watch in Week 7 include the Steelers at the Titans (both of which are undefeated). The Seahawks are at the Cardinals (Russell Wilson versus Kyler Murray!).

The Bucs are at the Raiders, in a reenactment of the “Tuck Rule Game.” (That was the 2001 AFC Divisional Playoff game between the New England Patriots and the Oakland Raiders, in which a controversial game-changing 4th quarter play was ultimately called in favor of the Pats. The game went into overtime, the Pats won, and then they went on to win the Super Bowl that year).

The Sunday NFL schedule was shuffled after several Las Vegas players were possibly exposed to coronavirus. As a result, in “an abundance of caution,” the Raiders-Buccaneers game was shifted to Sunday afternoon. The Seahawks-Cardinals matchup was moved to Sunday night. Can’t let that primetime slot go to waste!

The other big game of the week is the Chicago Bears at the LA Rams; people will be watching to see if either team could be a legit playoff contender in the NFC.

5. Baltimore Ravens beef up – will NY Jets tank for Trevor?

The Baltimore Ravens traded a third and conditional fifth-round pick to obtain Minnesota Vikings pass rusher Yannick Ngakoue this week. With an eye on the Super Bowl, it’s a strategic move to position the Ravens better against Patrick Mahomes and the Chiefs.

Meanwhile, the longer the New York Jets remain the NFL’s worst team, the more likely it is they’ll have an unobstructed opportunity to draft Trevor Lawrence, college football’s consensus top quarterback, in 2021. They’re currently well on pace to take the No. 1 overall pick in 2021. Cynics are muttering that head coach Adam Gase is hanging onto his job because the owners are afraid if they replace him, the team might actually improve its standings. Ouch!

This was the first weekend of the season for the Big Ten and Mountain West conferences (the Pac-12 season start is still two weeks out). Wisconsin thumped Illinois 45-7 on Friday night. The Badgers’ freshman quarterback Graham Mertz threw 5 touchdowns, tying a record for Wisconsin. Mertz had 17 consecutive completions to open the game, completing 20 of 21 passes overall for 248 yards. Wow.

For lots of fans, though, No. 18 Michigan at No. 21 Minnesota was the game of the week. Jim Harbaugh is in the sixth year of his head coaching contract, and there’s a lot of chatter about whether or not it will be extended. His Wolverines have lost to their arch-rivals Ohio State five times in a row. This may be a do-or-die season for him.

On the first outing of the season, the Wolverines dominated the Golden Gophers, 49-24.

The Big 12 conference game of the week was No. 17 Iowa State at No. 6 Oklahoma State. Heading into the weekend, Oklahoma State was the league’s only undefeated team. The Cowboys kept that streak going with a 24-21 win yesterday.

And if anyone in your next Zoom hangout says the word “Heisman,” the smart money is on either Trevor Lawrence, the Clemson quarterback; or Mac Jones, the QB for Alabama.

Kobe Bryant’s jersey and LeBron James’ shoes are being displayed at the Smithsonian Institution’s National Museum of African American History and Culture (NMAAHC).

A new display featuring the white No. 24 Los Angeles Lakers jersey Bryant wore during Game 5 of the 2008 NBA Finals opened for the first time on Monday. It’s part of the museum’s “Sports: Leveling the Playing Field” gallery, which also includes the LeBron James 15 “Equality” sneaker by Nike.

This week the NBA announced that it hopes to launch its regular 2020-21 season a few days before Christmas. Normally, the NBA season starts in October. But hey – nothing’s normal right now.

The 2020 Zozo Championship enters its final round today, with Justin Thomas and Jon Rahm atop the leaderboard. They are two of the best players in the world, so it should be a good finale. This is all a warmup for the Masters, which starts in three weeks. Meanwhile, is it just us who cannot stop giggling every time we see the words “Zozo Championship”?

10. In a return to Fight Island, Nurmagomedov reigns

Over on “Fight Island” in Abu Dhabi, UFC 254 unfolded this weekend. The headliner was undefeated lightweight champion Khabib Nurmagomedov. He was 28-0 heading into the match against the 22-2 American Justin Gaethje. Nurmagomedov made easy work of his opponent, needing less than 2 rounds for the win. The victory unified his lightweight title – and on an emotional note, it was his first win since the death of his father and coach, Abdulmanap Nurmagomedov, due to complications from COVID-19.

Immediately following the bout, the mixed martial artist announced his retirement from the sport. He said that he and his mother agreed that it was the right move. If he adheres to this plan, he’s potentially walking away from significant future earnings. Godspeed to you and yours, Mr. Nurmagomedov. We know your dad is really proud of you.

That’s it. You’re good to go with the top headlines and coming attractions heading into the week of October 25, 2020. Stay safe and healthy, dear reader. See you next week.