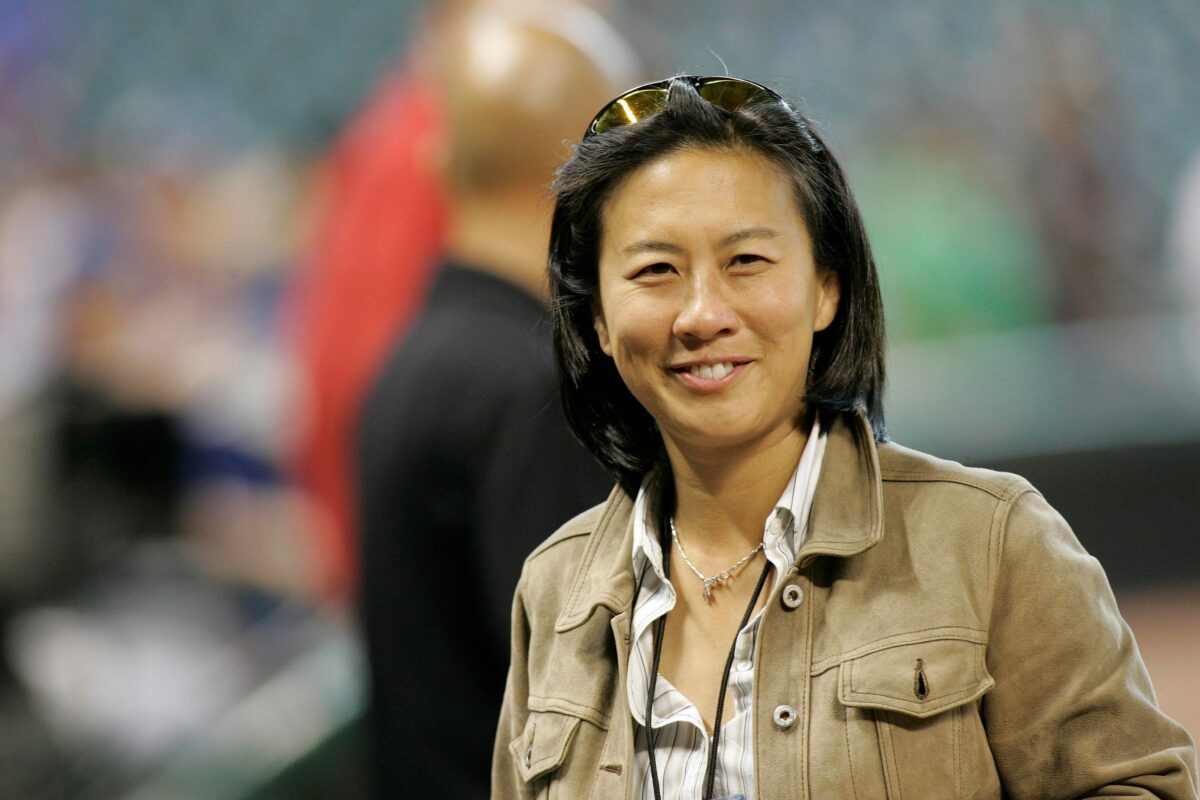 This Week in Sports Talk (TWIST) is our weekly roundup of top headlines and current events from the past seven days in the world of sports, plus a preview of what’s up next. Heading into the week of November 15, 2020, here’s how to talk about the top sports news of the moment. Skim it, and you’ll be good to go all week.

Dear reader, it’s been a hella good week in America for the League of Accomplished Women. Here are the top 10 stories to know heading into the week of November 15, 2020.

Kim Ng is the new GM of the Miami Marlins. Courtesy Photo.

Ng, 51, is a 30-year veteran of MLB, and has twice been an assistant general manager. She started work in the game as an intern for the Chicago White Sox, and later served in senior positions with the New York Yankees and the Los Angeles Dodgers. Most recently, she was Major League Baseball’s senior vice president of baseball operations.

Ng is the first woman to be a general manager in any of the major men’s sports leagues in North America.

2. It’s Florida and Ohio on top in Awards season in MLB

The regular season awards in baseball are in, and a player stricken by COVID-19 took top honors in the NL. Which seems oddly right in this upside down year. The NL MVP winner, Atlanta Braves first baseman Freddie Freeman, beat out the Dodgers’ outfielder Mookie Betts. Three weeks before Opening Day in July, Freeman contracted coronavirus. But he came roaring back, batting .341 with 13 home runs and 53 RBIs while playing all 60 games.

The AL MVP winner is the Chicago White Sox’ Jose Abreu, who beat out the New York Yankees’ DJ LeMahieu (who is now a free agent). At 33, Abreu is the AL’s oldest MVP winner since Dennis Eckersley won it as a 38-year-old in 1992.

Ohio claimed first place for pitchers this season. The NL Cy Young winner was Cincinnati Reds Trevor Bauer. In the AL, it was Cleveland’s Shane Bieber, (who is not, it must be noted, related to Justin).

Bauer enters free agency on the back of this win, and he’s the best pitcher on the market. Both New York teams and the LA Dodgers are reportedly in the hunt.

The Manager of the Year awards saw a Florida Sweep. In the NL, it was Miami Marlins Don “Donnie Baseball” Mattingly. The AL winner was the Tampa Bay Rays’ Kevin Cash. Interestingly, both have connections to the New York Yankees. In the 1980’s and ’90’s, Mattingly was a star first baseman for the Yanks. Cash’s Rays best out the Yanks this year for the division title with the third lowest payroll in baseball.

You see how everything in baseball is ultimately about the New York Yankees? Everything.

3. There’s a new king in Queens

MLB’s New York Mets fans are crushing hard on the new owner of their previously snake-bitten team. This week, hedge fund mogul Steve Cohn addressed Mets Nation for the first time. And the reviews were rhapsodic. “Batting 1,000” was the common refrain.

Cohen spoke of winning the World Series! He said there’s no need for Mets fans to feel inferior to the cross-town Yankees! As Sting so memorably once sang: “Turn the clock to zero, boss, the river’s wide – we’ll swim across . . . we’re starting up a brand new day.”

In week 9, Tom Brady and the Tampa Bay Buccaneers suffered an epic loss to Drew Brees and the New Orleans Saints, 38-3.

Meanwhile, the Pittsburgh Steelers won again and remain undefeated. However, their quarterback “Big Ben” Roethlisberger took enough hits that it wasn’t clear whether or not he’d be playing today. Last night, though, the team announced that he’s been activated from the reserve list and is expected to start against the Cincinnati Bengals today. So Bengals quarterback Joe Burrow will get his first big test in the AFC North going up against the mighty Steelers.

Gotham had a mixed bag on the field in week 9. The New York Giants won and are now 2 – 7 (believe it or not, they have a shot at first place in their division, even with that record). But the New York Jets lost again- this time to the New England Patriots via a last-minute field goal. But don’t cry for them, Argentina – our Sports Desk reports that Jets fans were relieved by the loss. They’re at lot more focused on getting the number one pick in the draft and securing the services of one Trevor Lawrence. The team is on a “bye” week, so everyone gets a breather in this suspenseful race to the bottom for a least a few days.

5. NFL Week 10 Game of the Week is Seahawks-Rams

On Thursday Night Football, the Indianapolis Colts beat the Tennessee Titans to tie them for first in the AFC South.

The “big” games this week according to our Sports Desk are the Philadelphia Eagles (3-4-1) at the New York Giants (2-7), as the two teams continue to fight for leadership in the NFL’s worst conference, the NFC East. The Sports Desk dudes also expect Seattle (6-2) at the LA Rams (5-3) to be a good game. The Seahawks are in danger of losing two in a row, so expect them to bring it. At stake? The lead in the NFC West.

Our Sports Desk notes that the chastened Tampa Bay Bucs should be on “upset alert” against quarterback Teddy “2 Gloves” Bridgewater and the Carolina Panthers.

The Buffalo Bills (7-2) at the Arizona Cardinals (5-3) should be entertaining. The Bills are coming off a big win against the Seahawks last week. Meanwhile, adorable quarterback Kyler Murray could earn his way into MVP discussions if he has a big game.

Finally, there may be an interesting storyline coming out of New England as Cam Newton faces off against the Baltimore Ravens and Lamar Jackson tonight.

6. 15 matchups in Week 11 of college football cancelled due to coronavirus protocols

Some teams did make it onto the field, though. No. 20 USC beat Arizona 34-30. The Fighting Irish of Notre Dame are on fire, continuing their winning streak from last week’s upset over Clemson with a victory yesterday over Boston College, 45-31.

No. 13 Wisconsin delivered a stunning defeat to Michigan last night with a 49-11 victory. Head coach Jim Harbaugh is not feeling any love from fans at the moment, as the Wolverines hit new lows this season.

The Ivy League announced on Thursday that it’s cancelling all winter sports, making it the first Division I conference to make such a call.

8. Dustin Johnson delivers at The Masters

The coronavirus pandemic forced pro golf to postpone The Masters tournament at Augusta from the spring to this weekend. It’s never been played in November, and all eyes were on defending champion Tiger Woods. Could he repeat?

Sadly for Woods’ fans, it seems almost impossible at this point. Tiger got off to strong start on Thursday, matching his best-ever start at the Masters. But his momentum flagged in subsequent rounds. And yesterday, Dustin Johnson broke away from the rest of the field, tying a 54-hole Masters record set by Jordan Spieth in 2015. It’s now his tournament to lose, as Johnson’s four-stroke lead entering the final 18 holes is the largest such lead at the Masters since 2015.

If he prevails, it will be Johnson’s first win at Augusta. It would be a remarkable feat for a player who was in quarantine for 11 days after testing positive for coronavirus just last month.

9. Westbrook wants out of Houston after just one season

According to The Athletic’s Shams Charania, the NBA’s Russell Westbrook has requested a trade after just one season with the Houston Rockets. The player apparently wants out due to the toxic “star culture” that has developed around James Harden (aka “The Beard.”)

A nine-time All-Star and 2016-17 NBA MVP (and fashion icon), Westbrook was traded to the Rockets from the Oklahoma City Thunder for Chris Paul before last season began. It’s not clear if his request will bear fruit. Watch this space for further updates: the NBA Draft is set for this coming Wednesday, and free agency opens Friday.

10. First woman to free-climb El Capitan in under 24 hours

We’re closing this week’s report on the same note upon which we began: a woman climbing to the top. In this case, it’s Emily Harrington, who completed a free-climb of El Capitan via the Golden Gate route this week in 21 hours, 13 minutes and 51 seconds.

She’s the fourth person and the first woman to complete the route in under a day. Climbers typically require 4-6 days to reach the summit. Girls Rule!

That’s it. You’re good to go with the top headlines and coming attractions heading into the week of November 15, 2020. Stay safe and healthy, dear reader. See you next week.