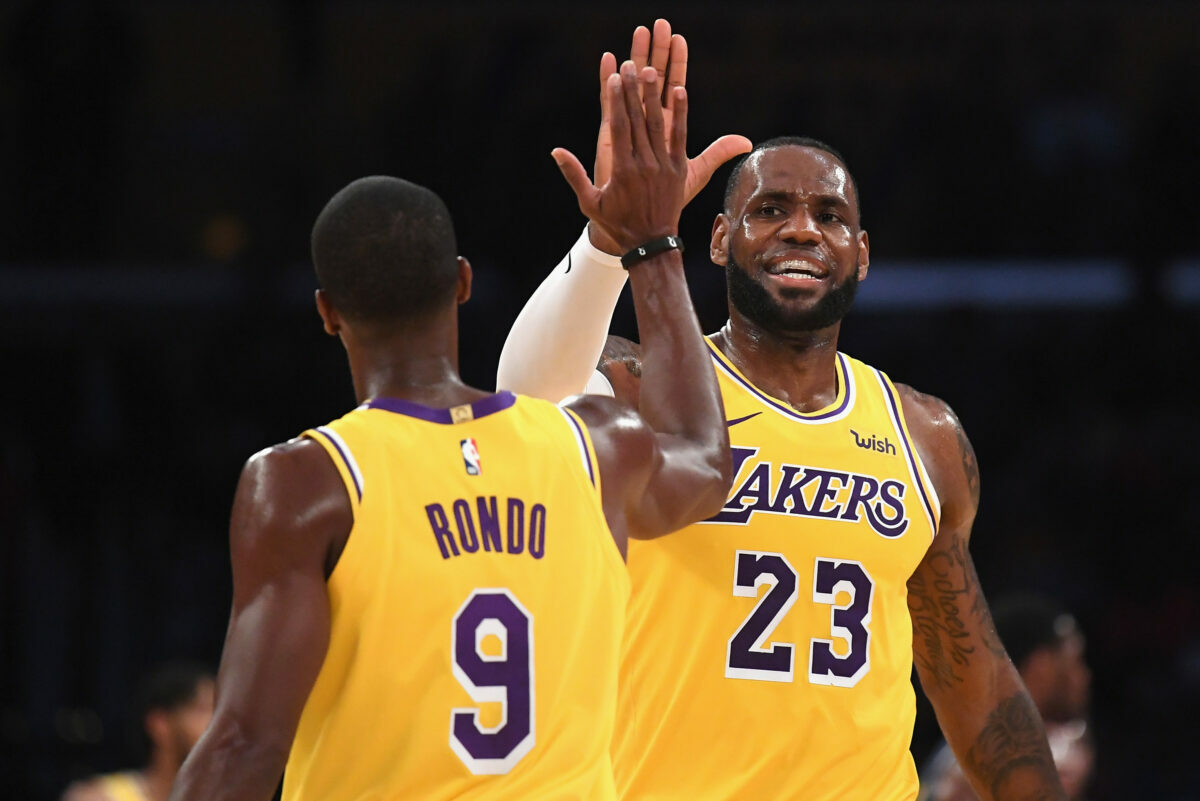 This Week in Sports Talk (TWIST) is our weekly roundup of top headlines and current events from the past seven days in the world of sports, plus a preview of what’s up next. Heading into the week of December 6, 2020, here’s how to talk about the top sports news of the moment. Skim it, and you’ll be good to go all week.

Here are the other top stories of note in the world of sports heading into the week of December 6, 2020.

1. New deals in the NBA for LeBron, AD and Westbrook

In what the media described as a blockbuster trade, but that many argue really won’t make any difference in the post-season, the Houston Rockets dealt Russell “Triple-Double” Westbrook to the Wizards in exchange for guard John Wall and a 2023 first-round pick. It’s Westbrook’s third team in three years.

In perhaps more intriguing news, as the Brooklyn Nets usher in the Kevin Durant/Kyrie Irving era, KD is denying reports that he spoke to the Rockets’ James Harden about a possible trade to the Nets. How cool would that be?

Later in the week, LeBron James and Anthony Davis signed extensions with the LA Lakers. James signed a two-year extension for $85 million, which makes it possible that he’ll be playing in the league at the same time as his son, Bronny. And the debate about who’s the NBA’s Greatest of All Time (GOAT) rages on: our Sports Desk still votes for Michael Jordan, but notes that King James has been the best player for over a decade. His presence makes every team he plays on an instant contender. He turns 36 on December 30, and he’s still going strong. Personally, we admire his leadership off the court even more. Go, LBJ, go!

The NBA announced its schedule for the first three days of the season, beginning on December 23 (just three weeks from now!).

Mark your calendar: the season’s first game will be a battle between Kevin Durant’s old team (the Golden State Warriors) and his new team (the Brooklyn Nets). The Battle of Los Angeles (that would be the Lakers versus the Clippers) is second on the schedule. Rest up now, fans – soon enough, it’ll be on.

On a less happy note, as the start of a shortened, 72-game season approaches, the NBA is bracing for disruptions from COVID-19 – as there is no “bubble” planned for the regular season. The league has laid the groundwork for coronavirus flare-ups, saying they expect the virus to infiltrate team facilities and have a plan for that. Sadly, CBS Sports reports that 48 of 546 NBA players tested positive for COVID-19 during the last week of November.

The Pittsburgh Steelers (11-0) and Baltimore Ravens (6-5) finally played their Week 12 matchup on Wednesday afternoon. After three postponements and more than 20 positive COVID-19 tests, the AFC North showdown finally happened! And it was messy. But Ben Roethlisberger led his team to a 19-14 win.

NFL Steelers Head Coach Mike Tomlin is remarkably on edge for a man leading the only undefeated team in the league. After the team’s week 12 win, he commented “It wasn’t perfect, but nothing is perfect about us except our record.” That unrelenting drive for improvement is probably why he’s one of the best head coaches in the league. This season, Tomlin surpassed his friend and mentor Tony Dungy for the most victories by a Black head coach in pro football. Despite that, Tomlin has never been named Coach of the Year – here’s hoping that this year he gets the recognition he’s clearly earned.

We’re embarrassed to admit that we knew next to nothing about Tomlin until our Sports Desk led us in his direction. It was joy researching his record, and we urge you to do the same. In the meantime, here’s an adorable anecdote from Antoine Brooks, one of his rookie players this season. He notes that even though he doesn’t get a lot of 1:1 time with Tomlin, he still feels seen and highly motivated by the head coach, saying in an interview that he likes that Tomlin has given him the nickname “Young Pup,” because “soon I will be that grown dog he wants me to be.” OMG. We love this man.

Due to the league’s coronavirus protocols, the NFL schedule continues to be in a constant state of revision. For example, for Thanksgiving and the weekend that followed, there were 2 games on Thursday, 12 on Sunday, one on Monday and one on Wednesday.

This week, which is lucky number 13, there was no Thursday game; but there are 12 today, 2 on Monday, and one on Tuesday. So when your NFL-loving spouse or partner says they’re not available to help with the laundry because “there’s a game,” you can believe them. This week, at least.

In week 13, the undefeated Steelers (11-0) will play the Washington Footballers (4-7) on Monday in the late afternoon – could there be a dramatic upset? Similarly, the winless New York Jets (0-11) play the Raiders (6-5) – could they actually win a game this season?

The New York Giants (4-7) won last weekend and moved into first place in the NFC East. Every other division leader has at least eight victories. But hey, a lead is a lead. This week, the Giants go west to play the Seattle Seahawks (8-3).

In another big matchup this week, the question is whether the New Orleans Saints (9-2) can win against the resurgent Atlanta Falcons (4-7) without their star quarterback Drew Brees, who is still on the IR after suffering a collapsed lung and 17 fractured ribs. Wow. It hurts just to type that. 17???? Ugh.

As the season’s end approaches, the NFL playoff situation is beginning to gel. Interestingly, if the season ended today, Tom Brady and the Tamp Bay Buccaneers would travel to the New York Giants to play a playoff game. Which is noteworthy mostly because Brady lost two Super Bowls when he was with the New England Patriots to the Giants. So he might get triggered . . . Although we note that the Bucs did defeat the Giants already once earlier in the season.

The college football conference championships start in two weeks. Barring any significant upsets, the playoffs are likely to feature the 4 top-ranked teams (who are the usual suspects): Alabama (8-0); Notre Dame (9-0); Clemson (8-1); and Ohio State (4-0).

Our Sports Desk argues that the Fighting Irish of Notre Dame may have an inflated ranking, given that their overtime win over Clemson occurred when Clemson’s star quarterback Trevor Lawrence was still out due to the coronavirus protocol. We note here that Lawrence is the consensus #1 draft pick, and that every fan of the New York Jets (0-11) who we know personally is praying that he’ll be their new quarterback.

In college hoops, all eyes have been on No. 1- rated Gonzaga. They were scheduled to play number 2 Baylor – but the game was postponed at the last minute due to a positive COVID-19 test within the Gonzaga team roster. Ugh.

USA TODAY Sports notes that there were other, less high-profile cancellations yesterday as well. No. 10 Illinois canceled its game against UT Martin and No. 24 Ohio State canceled a game with Alabama A&M. The publication reports that since the season began on November 25, more than 50 games have been postponed or canceled.

Multiple news outlets reported on Friday that the NHL is planning on a mid-January 2021 start date for its next season, with a 52- or 56-game schedule.

This week marked MLB’s “non-tender deadline”, meaning that players who didn’t receive a contract offer (or tender) from their team by Wednesday are now officially free agents.

After lots of speculation, in the end the New York Yankees tendered Gary Sanchez. Kyle Schwarber and David Dahl, however, are now among the top-tier free agents.

Last week we reported on the new winter collection from luxury footwear brand Stuart Weitzman fronted by one Serena Williams.

This week our Sports Desk informs us that the cool tennis fashion wave is still rolling. Yesterday, a hot sneaker drop was delivered from a new three-way collaboration between Naomi Osaka, “It” brand Comme Des Garçons and Nike. The limited edition Blazer Mid sports the phrase “Home is Where the Heart Is” in script form across its midsection, paying homage to Osaka’s Japanese heritage. Her signature is also scribed along the upper.

We also have word that Venus Williams has launched her new vegan brand, Happy Viking, a line of plant-based protein supplements. Coco, we’re waiting for you, girl!

That’s it. You’re good to go with the top sports headlines and coming attractions heading into the week of December 6, 2020. Stay safe and healthy, dear reader. See you next week.